Winter is slowly losing its icy grip to the impending warmth of summer, making this a great time to get some late-season winter hikes in. Yes, it’s technically spring in the High Peaks, but it’ll probably still look like winter in the mountains for a few more weeks. 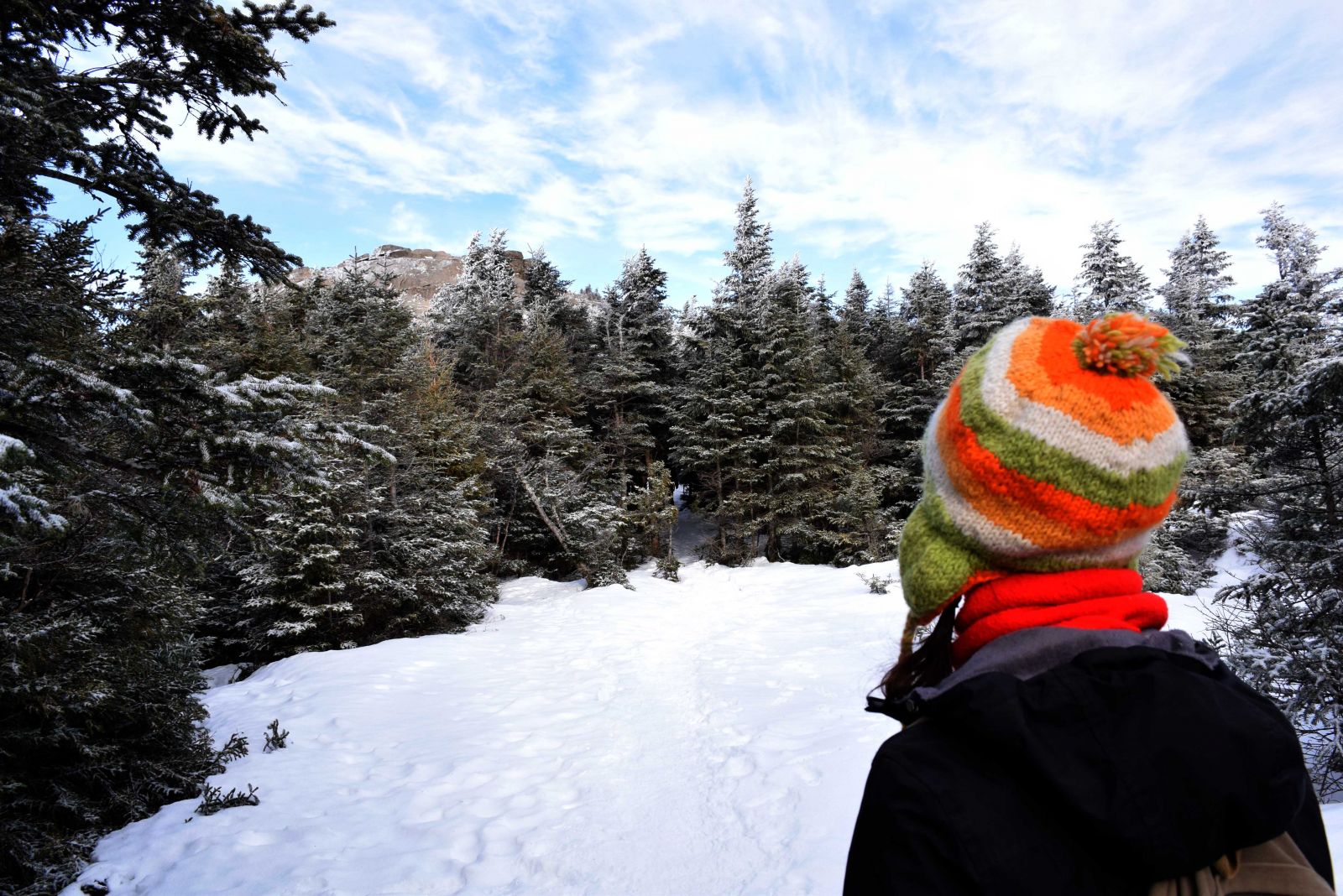 I like to take advantage of the warmer temperatures and get a farewell look at the winter scenery before it's gone. Plus, once the snow melts the state Department of Environmental Conservation asks everyone to stay off high-elevation trails until they dry out. The reason is simple: The trails and the surrounding forests are vulnerable and can be easily damaged until they’re dry. So hit up these three favorites before the snowpack is gone.

Here’s a tip: Bring snowshoes and microspikes on these hikes or you won’t get far with the snow and ice you’ll encounter. Also be sure to bring extra warm, non-cotton layers. Even if it’s a warm day it’ll be much colder up high, so be prepared for winter conditions. 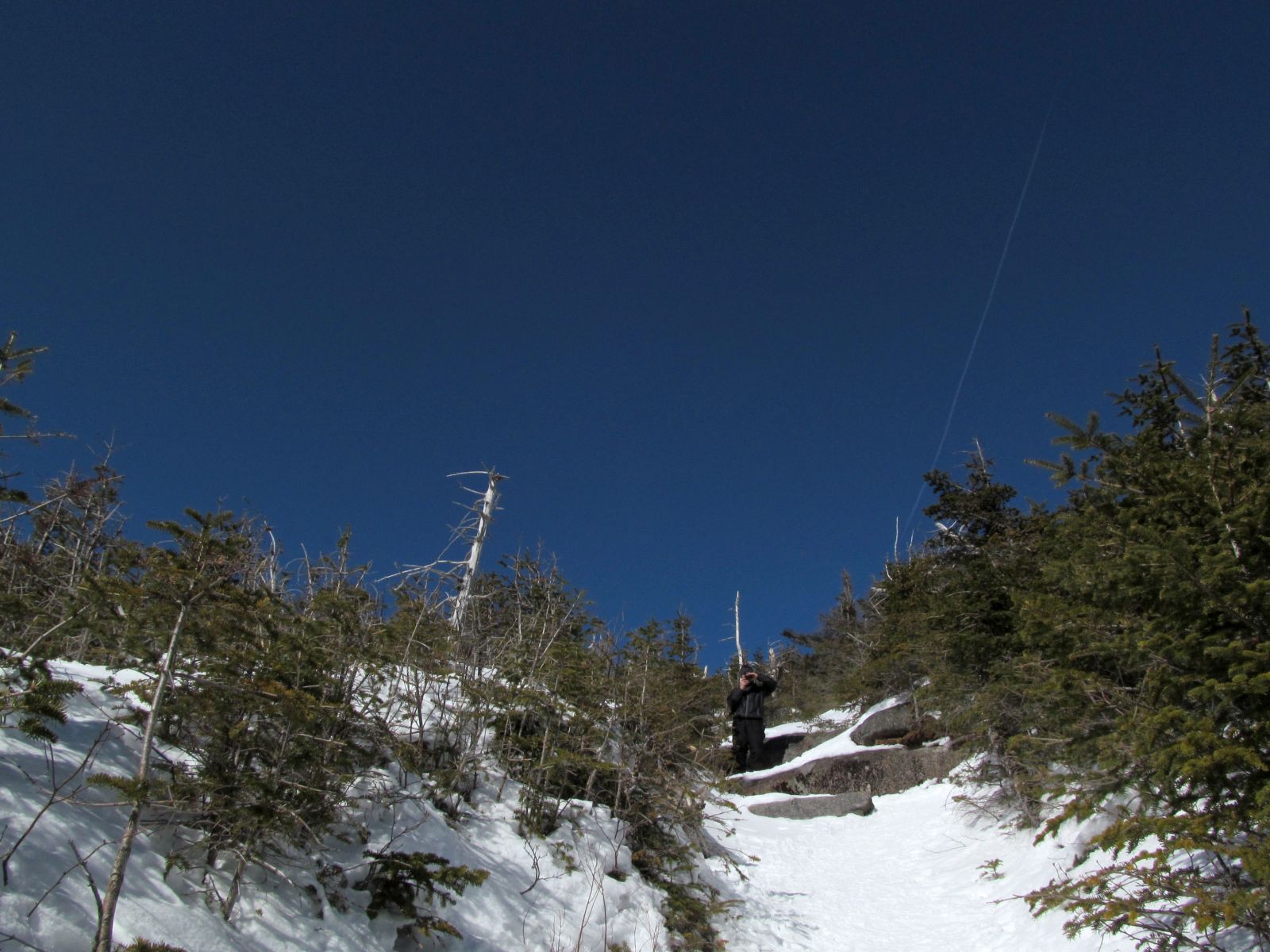 Phelps is a great alternative to its bigger, busier neighbors and since it’s on the way to Mount Marcy, the highest point in New York state, hikers often cruise right past it. The truth is, Marcy is a demanding hike that can be dangerous to hikers who aren’t prepared for conditions above timberline, which this time of year are typically cold, icy, windy, and prone to changing with little warning.

If you’re relatively new to hiking and want a serious challenge, or if you just want an outstanding view, try Phelps. The trail starts at the High Peaks Information Center, located at the end of Adirondak Loj Road just south of Lake Placid on Route 73.

The 4.4 mile route begins with an easy 2.2-mile ramble toward the now-breached Marcy Dam. You won’t be able to cross the dam, but you’ll still get to see the panorama of Mount Colden, Avalanche Pass, and the lower flanks of Algonquin and Wright.

Turn left at the remnants of the dam and follow the trail to the new bridge over Marcy Brook. Cross the bridge and turn right, then follow signs for Marcy and Phelps. The trail begins to ascend at a gentle to moderate grade before swinging left to cross Phelps Brook. During warmer months this stunning mountain stream can usually be crossed on rocks, but in spring it’s much easier — and safer — to simply take the bridge. 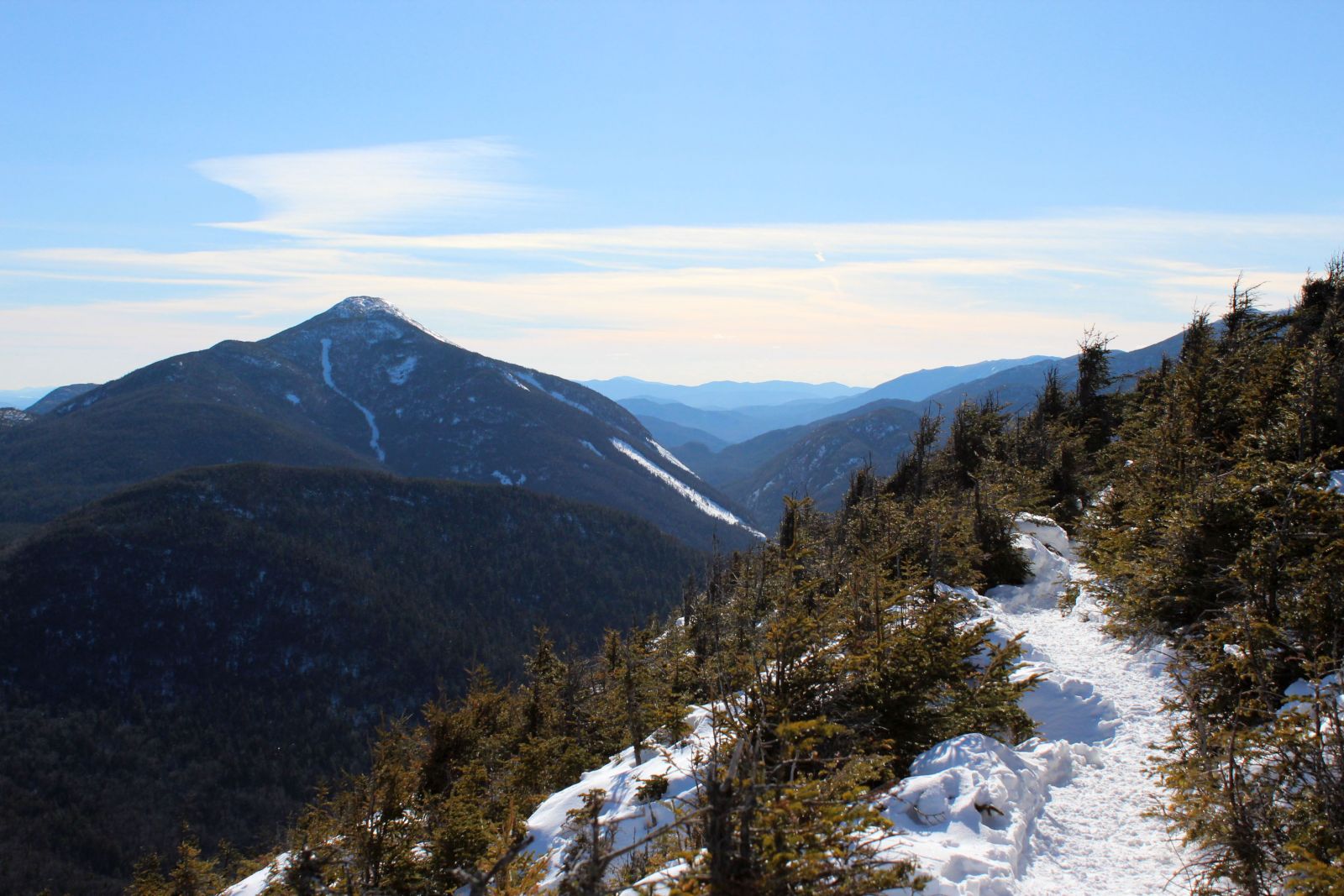 Continue following the path uphill for another 0.7 mile — keep an eye on the brook to your right, it’s beautiful — and turn left at the trail junction to head up Phelps. If you’re exhausted at this point you might consider turning back, as this is where things begin to get steep in a hurry.

If you haven’t already done so, now’s a great time to swap those snowshoes for microspikes. What lies ahead is a steep climb up the side of Phelps, one that might require using your hands to steady yourself at times.

After about 1.2 miles of this you’ll step out into an area where the trees are significantly shorter. From here it’s a bit more climbing to the summit, where an impressive panorama of some of the region’s highest mountains awaits. 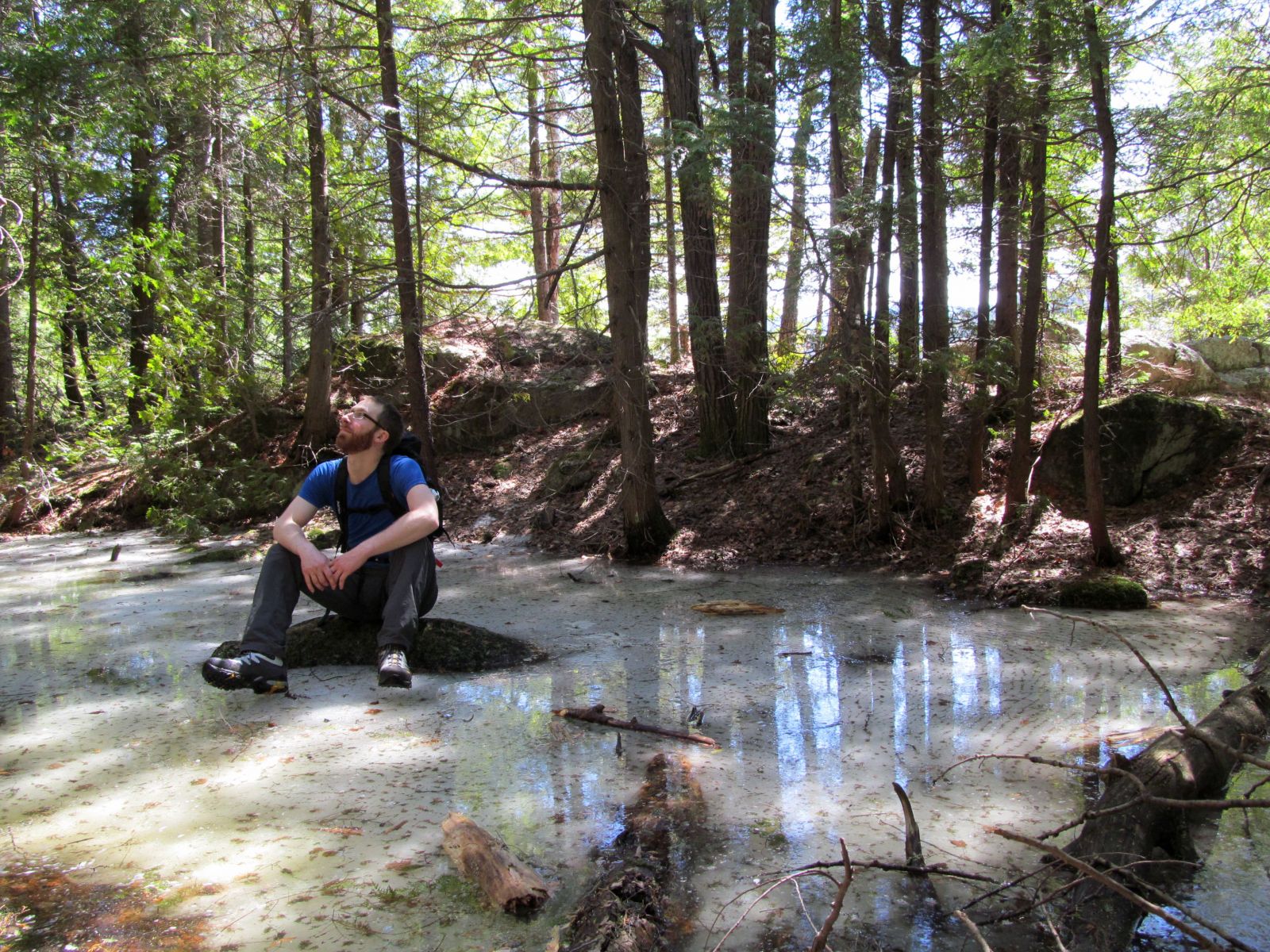 Giants Nubble is one of my go-to hikes for people who aren’t avid hikers because it has it all —a nice teaser view along the way, an awesome backcountry pond with a tremendous cliff as a backdrop, and a drop-dead-gorgeous finale that sandwiches you between Giant Mountain and the impressive Great Range.

Start at the parking area that’s on the right, about 5 miles south of Keene Valley on Route 73 and just past the Chapel Pond parking area.

Carefully cross the road and follow the trail as it immediately charges uphill. It’s a tough 0.7 mile climb that rewards hikers with a ledge that affords a nice view that is a destination in its own right. If this is your turnaround point, consider going a little further to Giants Washbowl. It's easy and well worth it. 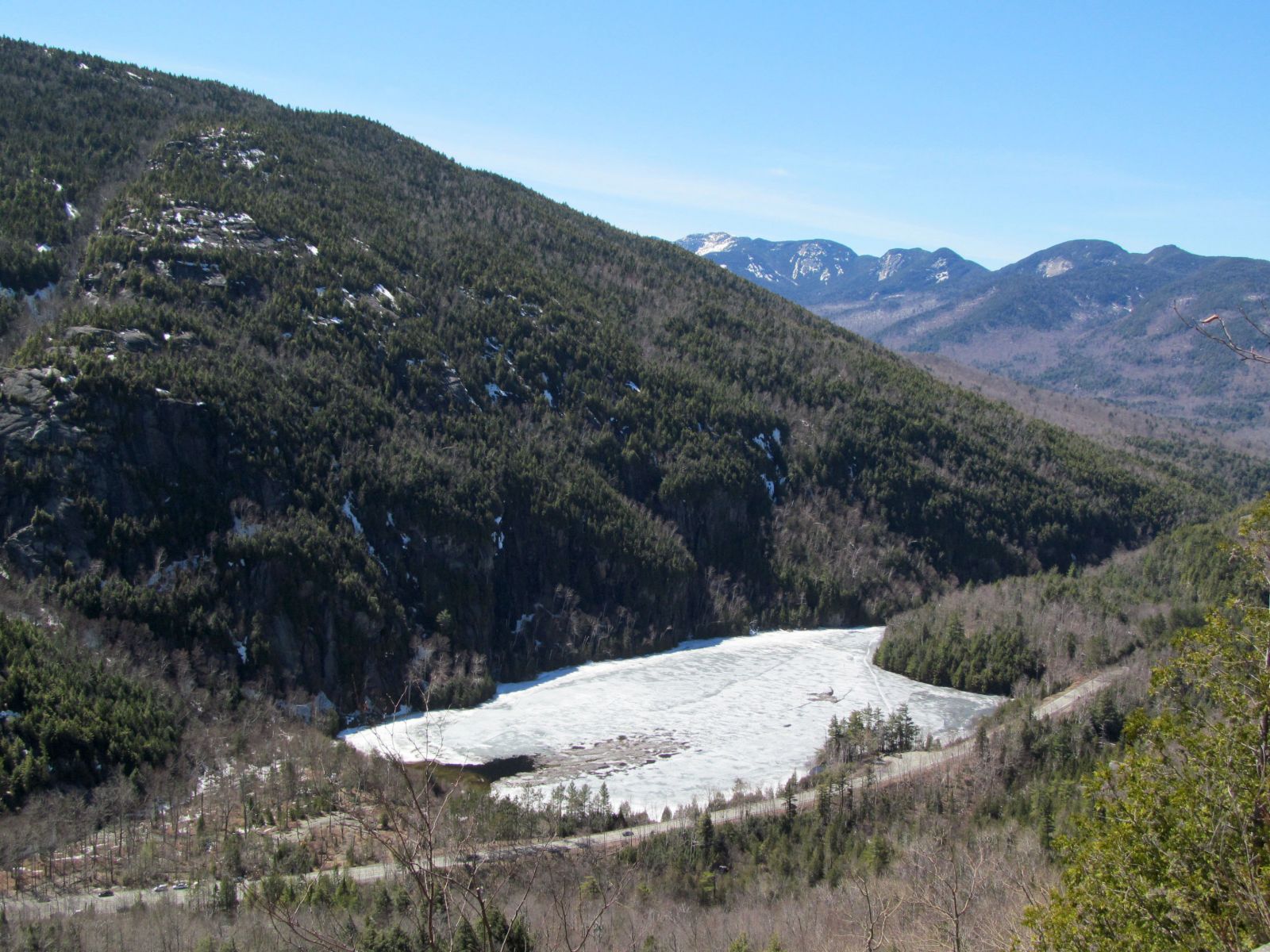 Take your time enjoying the Washbowl, a dramatic backcountry pond, before heading right to cross the outlet. After more uphill there’s a junction; straight goes up the scenic and difficult ridge trail to Giant’s summit. Turn left to wrap around and ascend the backside of the Nubble, which is reached at 1.5 miles from the parking area. 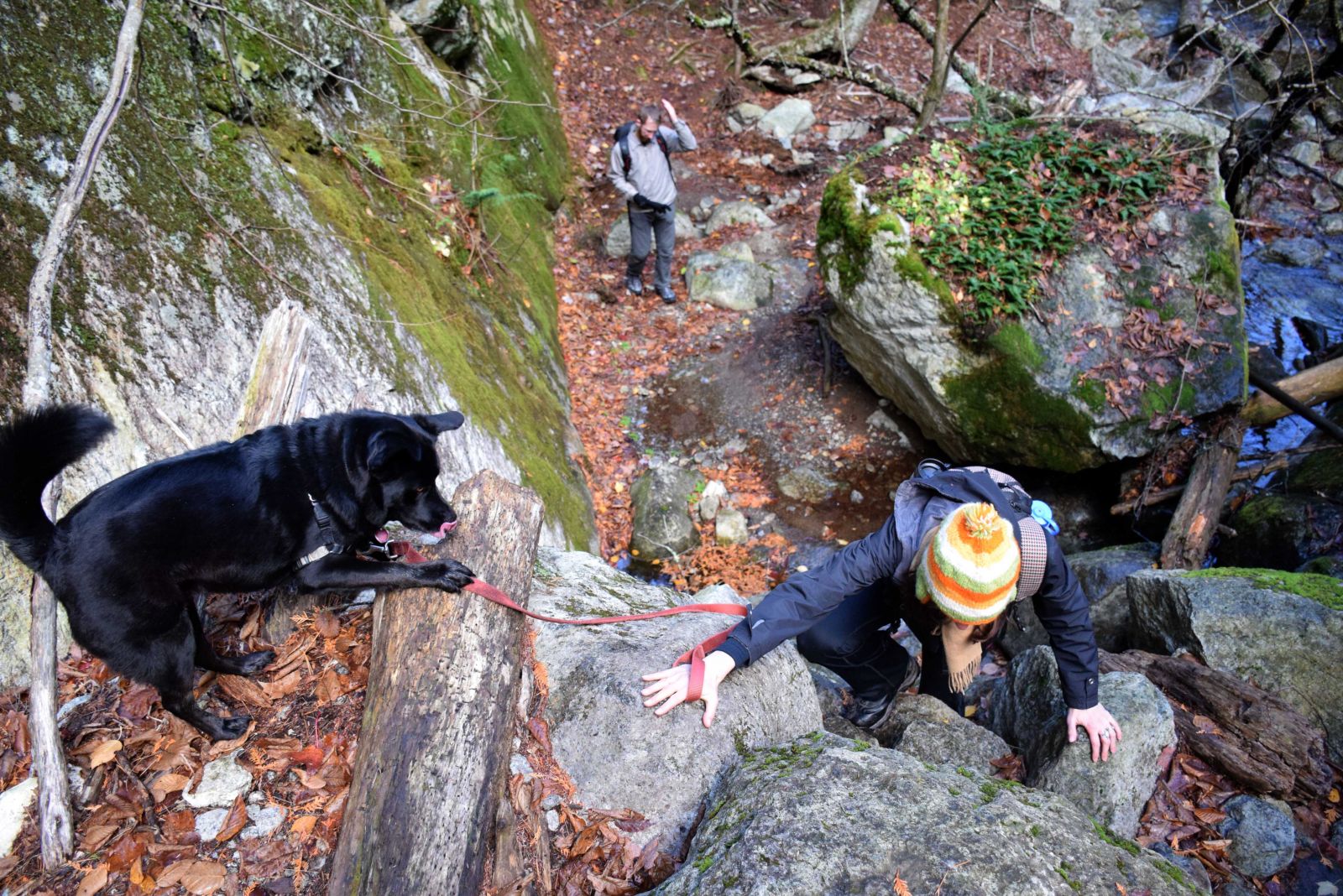 The first time I hiked the trail to Snow Mountain I was on my way to Lower Wolf Jaw Mountain, a much tougher path that branches away at the 0.7 mile mark. I never forgot the first portion of the Snow hike — a beautiful, mossy gorge with emerald-colored water coursing past jumbles of boulders and over steep little drops.

A word of warning, though: The gorge is pretty much impassable when it’s filled with deep snow and ice. If that’s the case, or if the spring snow melt has caused Deer Brook to swell, be safe and take the high water route. The gorge will be there, and the hike is still worth your time even without it.

To get to the trailhead, take Route 73 about 2 miles south of Keene Valley and park on the left, just past the steel bridge. Carefully cross the bridge by foot. The high water route starts at the driveway on the left — be sure to stay on the dirt road and avoid walking on private property. There is a sign at a bend in the road to indicate where the route rejoins the footpath, which at this point is out of the gorge.

To get to the beginning of the trail up Deer Brook, simply walk past the driveway and look for the green, wooden sign on the left. The trail is easy to follow as it crosses and recrosses the waterway to stay on the best side for walking. Be aware that this route requires some light scrambling up rocks and several water crossings, so it’s best avoided if the water is high.

Whichever path you choose, they converge before crossing a bridge. The path continues straight and away from the water, but it’s worth continuing up the left bank of the brook to see the impressive waterfall at the top of the gorge. It isn’t far, and it’s quite a site.

After the bridge, the path gradually climbs away from Deer Brook before swinging right. This level stretch area goes between Hedgehog and Snow mountains before a path to the right goes to the summit. There are some steep sections here that will probably require microspikes in the spring. Just take it slow and plan your route carefully before moving forward.

After 1.7 miles miles, the trail rounds off and at a jaw-dropping view of Giant, Dix, and Noonmark mountains.

Ready for summer? Start planning your Lake Placid getaway today! Check out our lodging, dining, and events pages to get started.

Reelin’ in the ladies

Get it while ya can

Ice out, fish in