A hike to the summit of an Adirondack High Peak is like walking back in time.

Algonquin, the Adirondacks' second-highest mountain, is an ideal place to see this living museum first-hand. Starting at the Adirondak Loj, the trail begins with an easy stroll through a beautiful forest of mixed evergreens and hardwoods. Things are pleasant and calm down here, but as the path gains elevation the grade steepens and everything changes. 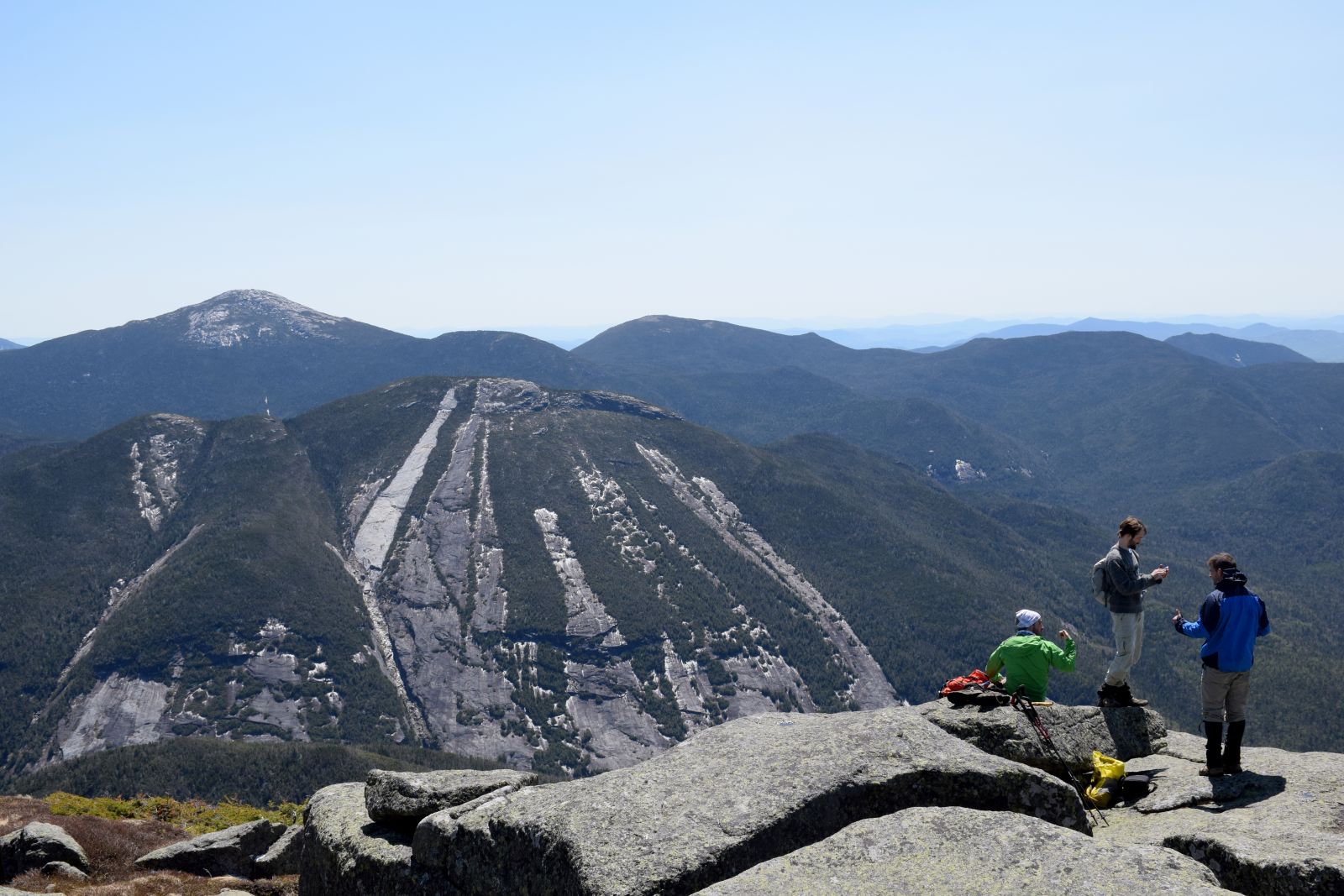 Shortly after bearing right at a trail junction — left goes to Marcy Dam — you'll cross a stream and enter a forest that mostly consists of white birch. A sure sign of a past disturbance, this species is one of the first to colonize an area after something like a wind storm, fire, or axe has its way with the forest.

The path continues on, toward the shoulder of the mountain, and before it reaches a nice slab of rock that's particularly fun to scramble up, the forest has become filled with evergreens, mostly balsam and spruce. That's because gaining elevation is like traveling a few hundred miles north, where the days are shorter, the winters are longer, and the temperatures are lower. These evergreens, with their waxy, moisture retaining needles, rule that landscape and are therefore well-suited to thrive in the mountains here. 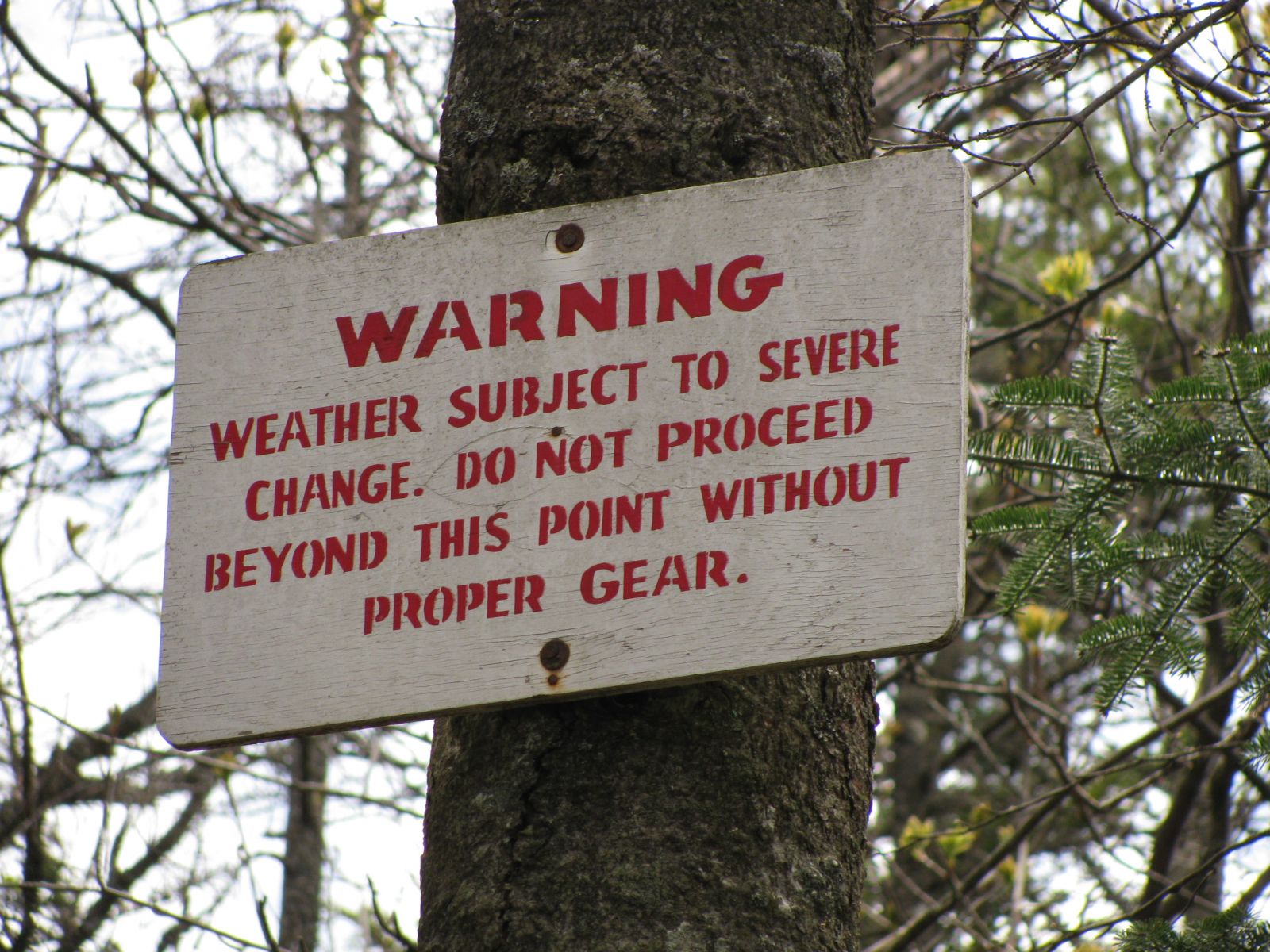 Shortly after passing the wonderful McIntyre Falls — Algonquin is part of the McIntyre Range, after all — there's a sign of things to come. A bedraggled, weather-ripped wooden square warns of year-round winter-like conditions in bright red letters. It's conveniently located at the base of a particularly steep section of rock. Welcome to mountain country: You're about to enter another world.

A careful clamber and short, level stretch of trail brings the hiker to the base of Wright Peak's summit. This is the gateway to an ecological zone known as "krummholz." Loosely translated to English, the word means "the prickliest, densest, most wretchedly impenetrable forest on the face of the earth." Something like that. 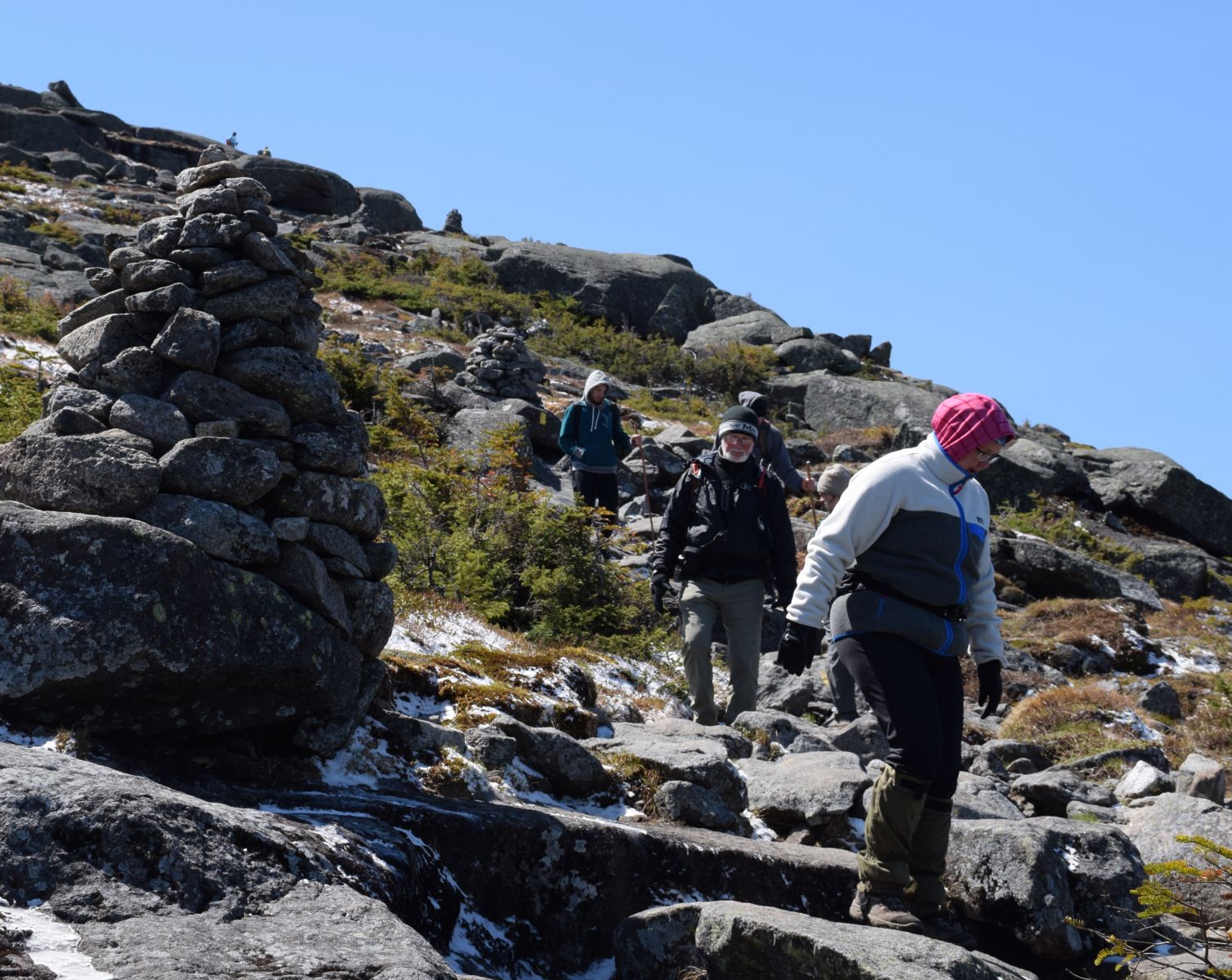 Joking aside, this zone of vegetation is prickly and dense, but that's because it's such a difficult place to live. It's also quite a beautiful place to be. The stunted growth affords views of the surrounding mountains and sneak peeks at the summit about to be climbed. But the plants probably don't see it that way. Take a closer look and you'll find there's a lot of balsam and red spruce clinging to the rocks. The occasional mountain ash lends its tropical-looking compound leaves to the scene, and the scrappiest looking white birch you've ever seen are also there.

Nothing grows tall here because the constant exposure to wind, sun, rain, snow, ice, and sleet prevent that. In fact, take a look at the trees on the upper flanks of a mountain and you'll see which way the wind usually blows. These are flag trees, so-called because the branches all go in one direction, like a flag caught in the wind. The "pole" side of the tree becomes denuded because the wind hits it relentlessly; drying it, pushing it, punishing it. On some mountains this causes fir waves, a situation where the outer, exposed trees on a slope perish from the elements, thus exposing a new line of trees, which also die. The dead trees eventually lose their foliage and have a silver-gray sheen when seen from afar.

There's a lot to see at eye level, but take a moment to look down at the bare rock you'll soon be scrambling up. The mountains themselves are geologic wonders. Comprised mostly of anorthosite granite, a material formed deep underground by seriously prolonged and intense pressure, these landforms slowly heaved from the earth and reluctantly yielded to the will of passing glaciers. The result is a dramatic landscape of rocky summits railroaded by deep, trench-like water bodies that look as if they were scratched into the earth by a set of enormous, bent fingers.

The evidence of this history culminates on Algonquin's summit. When the last glacier receded, the region was a much different place. The area's forests were more like those found in tundra ecosystems far north of the Adirondacks, but as the climate warmed other plants, like hardwoods, pushed north. You'll see those more in the lower elevations, species of maple, ash, beech, and oak, but up high, in the exposed expanses of our summits, tundra conditions still persist. The vegetation there is a product of those conditions, and it's been there for centuries. 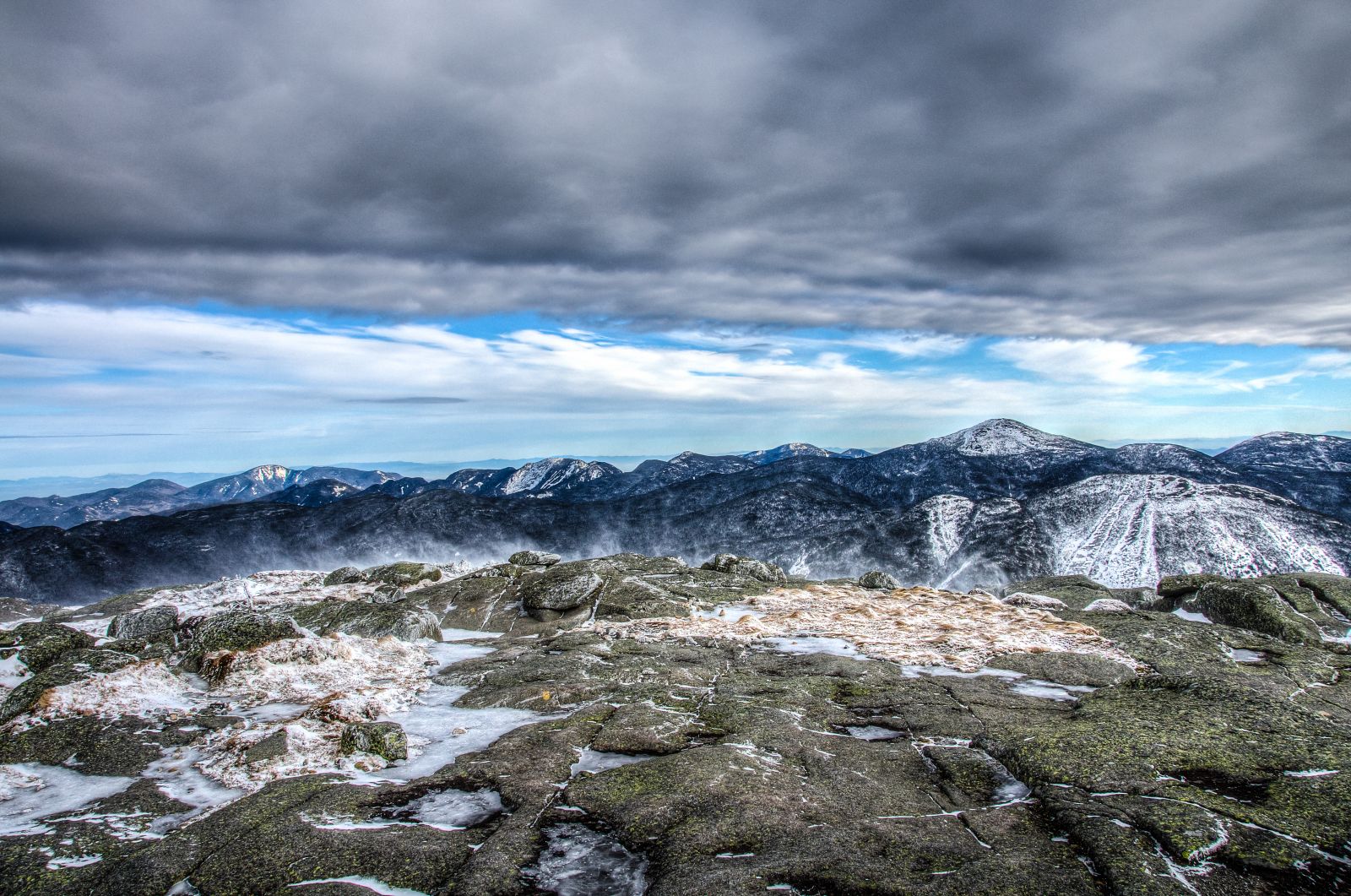 What would you do if you were stuck in a place that's always cold and windy? You'd probably stay low, hunched over with your arms around your knees in an effort to stay warm. Alpine plants do a similar thing. Many of them only grow a few inches tall and have a bunched-up, pincushion-shaped growth pattern. Others simply remain stunted. Some species, like Labrador tea, can also be found in lower-elevation wetlands, where they achieve greater heights. One low grower, bearberry willow, is a tree that can live hundreds of years with a trunk that gets no bigger than your thumb.

A closer inspection reveals that many alpine plants also have waxy leaves, which protects them from the wind, helping them retain moisture. It also helps them survive the winter and make the most of spring. Unlike deciduous trees, which have to use energy stores to grow leaves every spring, many of these plants are evergreen, so they're ready to photosynthesize as soon as the sun hits them. That's important for a plant that only has about two frost-free months a year to grow. 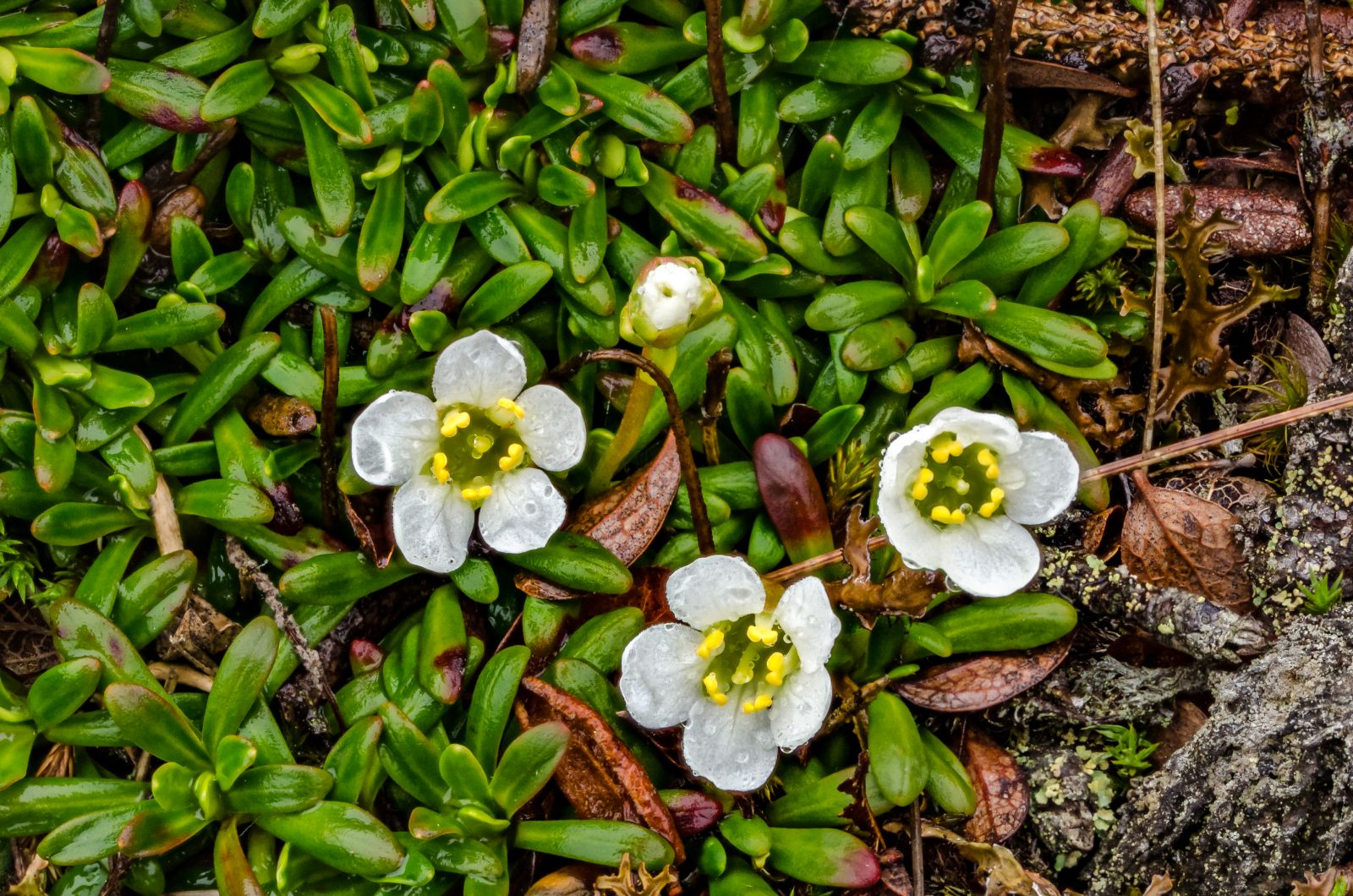 Today, alpine vegetation only grows in 21 places in the Adirondacks, 16 of which are summits in the High Peaks. Take care to stay on the rocks when observing these delicate plants, as a single boot step can kill them. Decades ago, the majority of our alpine vegetation was trampled by hikers who probably weren't aware of the damage they caused. Back then today's lush alpine gardens were a barren landscape of dirt and stone, but the hard work of biologist Ed Ketchledge and workers with the Adirondack Mountain Club's Summit Steward Program turned that around.

There's a good chance you'll see a summit steward on your next hike up any number of popular High Peaks, like Algonquin. They'll remind you to avoid the vegetation — and that's a good thing — but they'll also answer questions about the landscape that's beneath your feet and laid out before you. Pick their brains and you'll learn a lot. Evidence of the Adirondacks' past is everywhere. It's a rugged, epic story of constant change and unimaginably powerful forces. 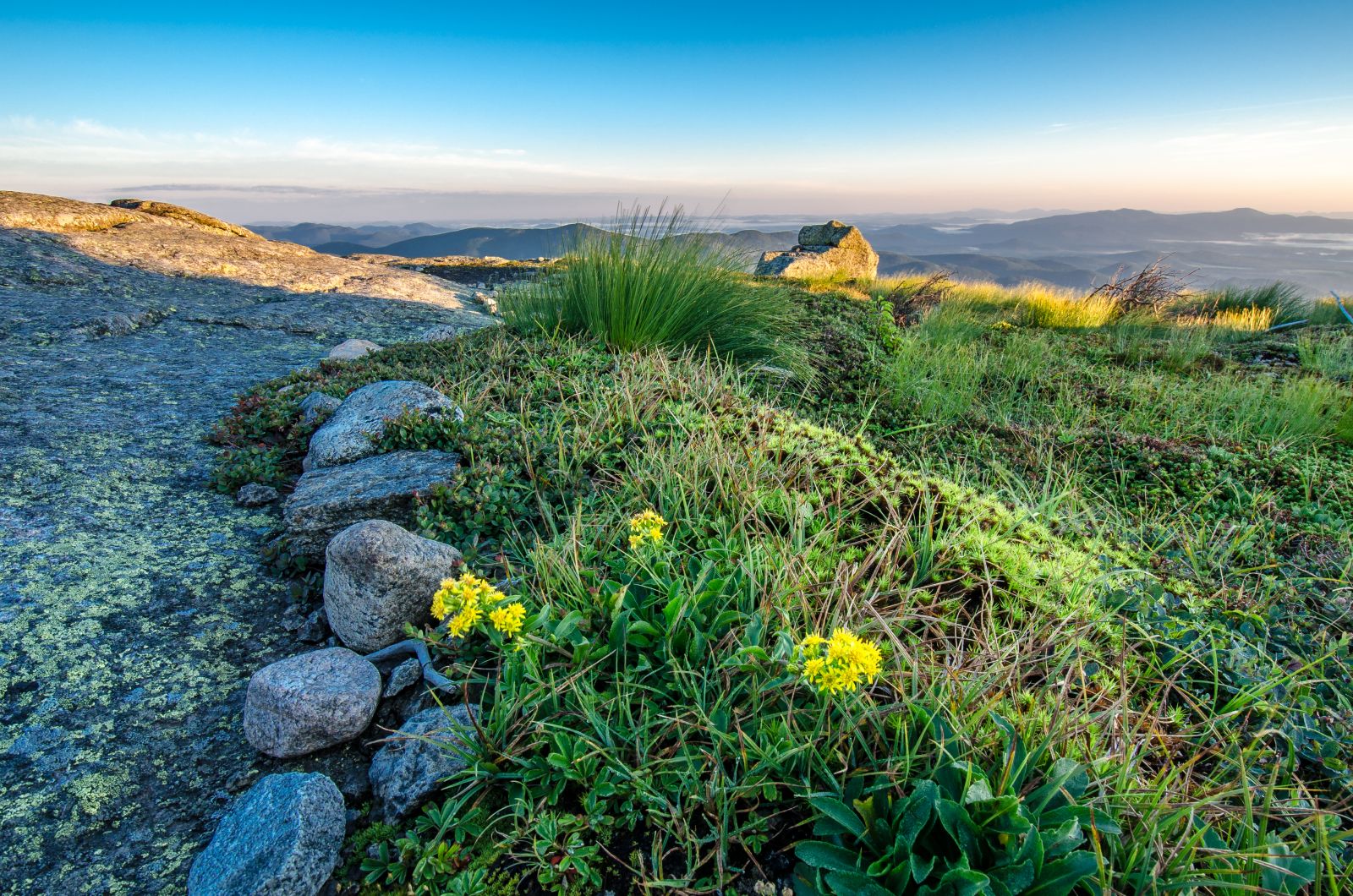 Take a trip into Lake Placid after your High Peaks adventure and treat yourself to a cold drink, warm meal, and a little live music. There's no better way to catch your breath in the Adirondacks!

Ghost of a town

The house of history