The day was young and the sun had not even started to rise above the trees along the river near my house, it might as well have been midnight. The night had been overcast and the moon didn’t even cast a shadow, it was apparent that the day would be the same. With a 30% chance of thunderstorms and heavy rain at times we still took a chance on heading out to Wallface Mountain. The temperatures were cool enough and 30% isn’t all that threatening. I remember days past when I canceled a trip due to 90% and it never rained and vice versa on a 20% day: it really is a roll of the dice.

We arrived at Upper Works promptly at 6:00 am in a sort of mental-muddle from the short night and long drive, but we were raring to go. We passed along the gravel road and over a source of the Hudson River, passed by the spur trail to Henderson Lake and quickly onto the Indian Pass Trail. The trail started to get quite soggy in areas where old corduroy has found itself submerged in water and mud deeper than any hiking boot could conquer, but the slippery passage didn’t slow us down any, we were anxious to get to the bushwhack. 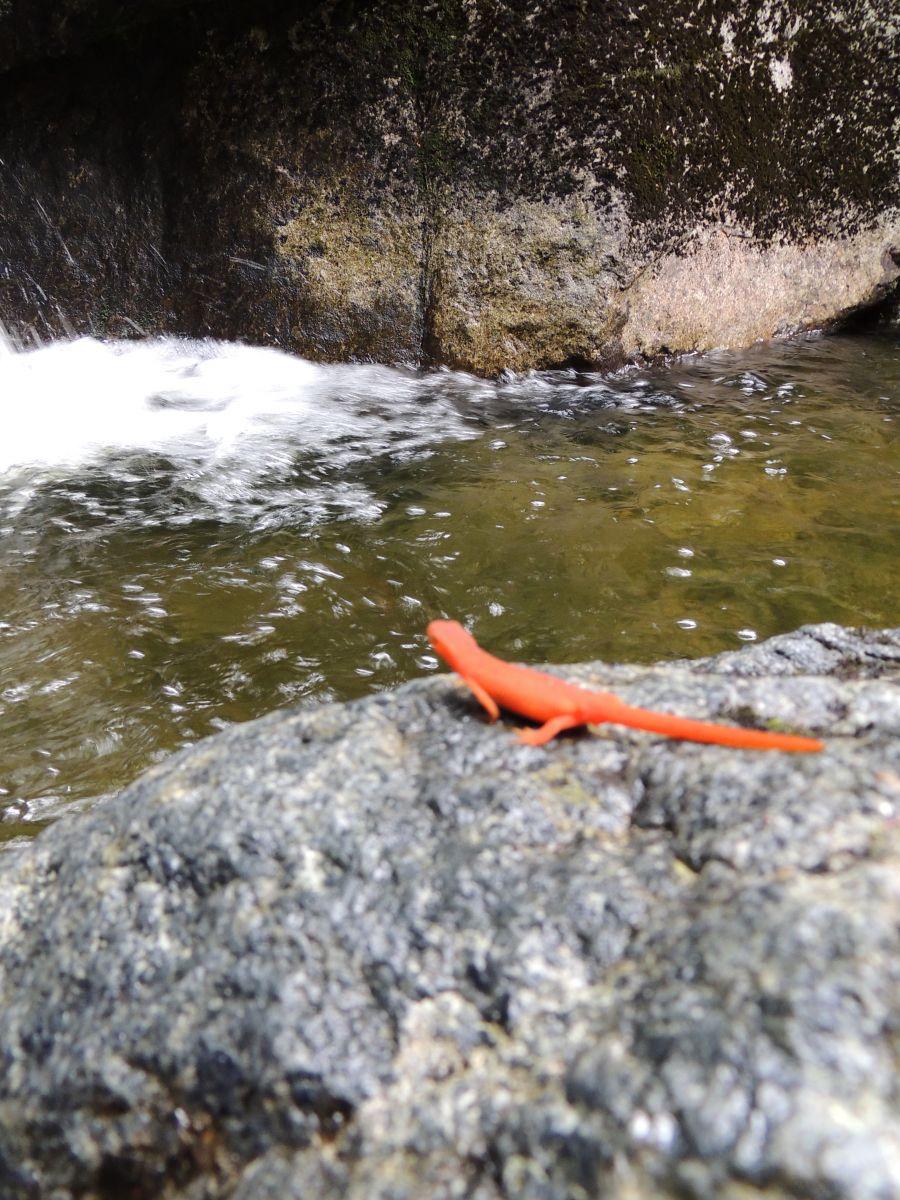 As we passed by the Duck Hole Trail and climbed up to higher ground, the sun made its presence known with a peek through the clouds, producing rays through the moist air and brightening up our morning. We were at Wallface Lean-to before I knew it, where we took a bit of an extended break to energize ourselves for what would surely be an adventure. The key to this climb is to get the correct drainage from Wallface Pond which rests over a thousand feet in elevation above us. This drainage will give us secure, scenic and easy passage to the base of Wallface Mountain on its SW side. Wallface Brook, as I call the drainage is wide and very hard to mistake for anything other than what it is. 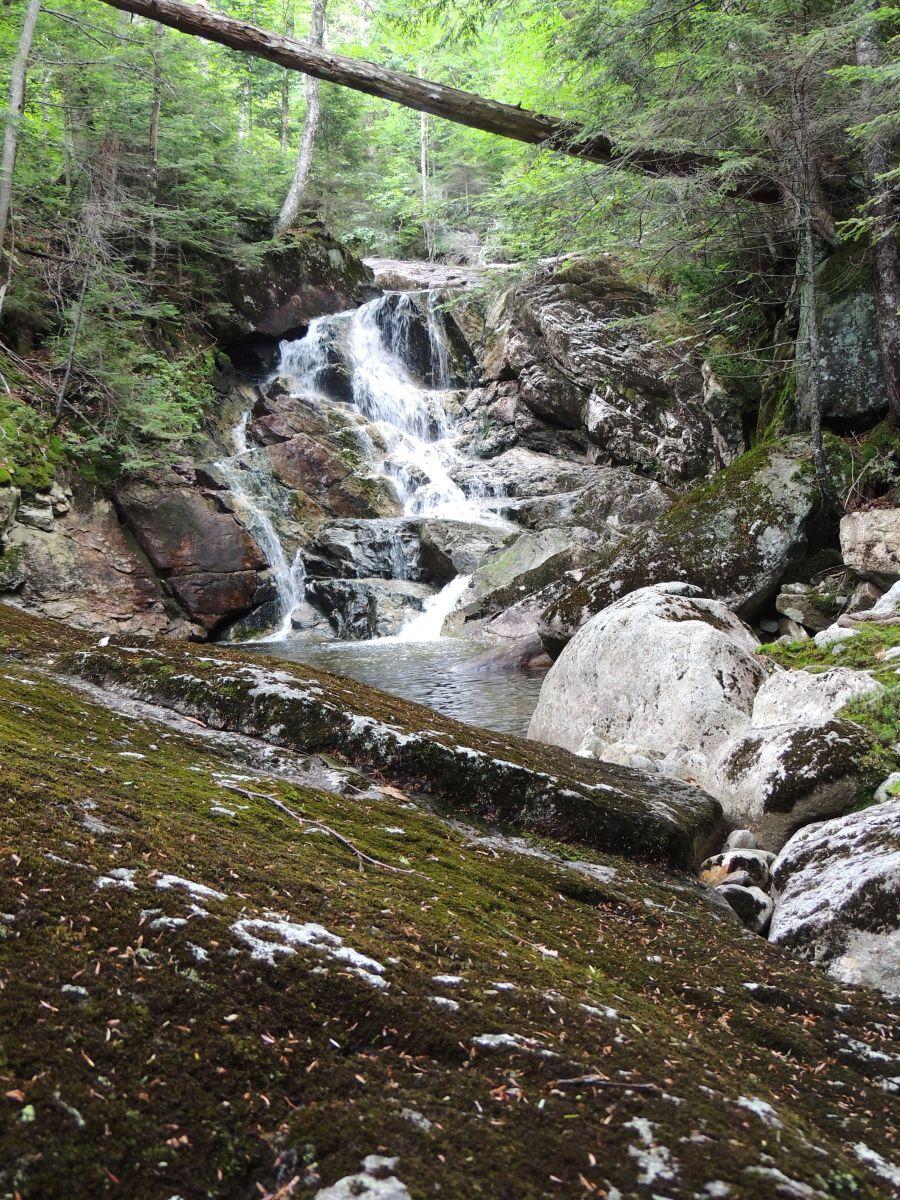 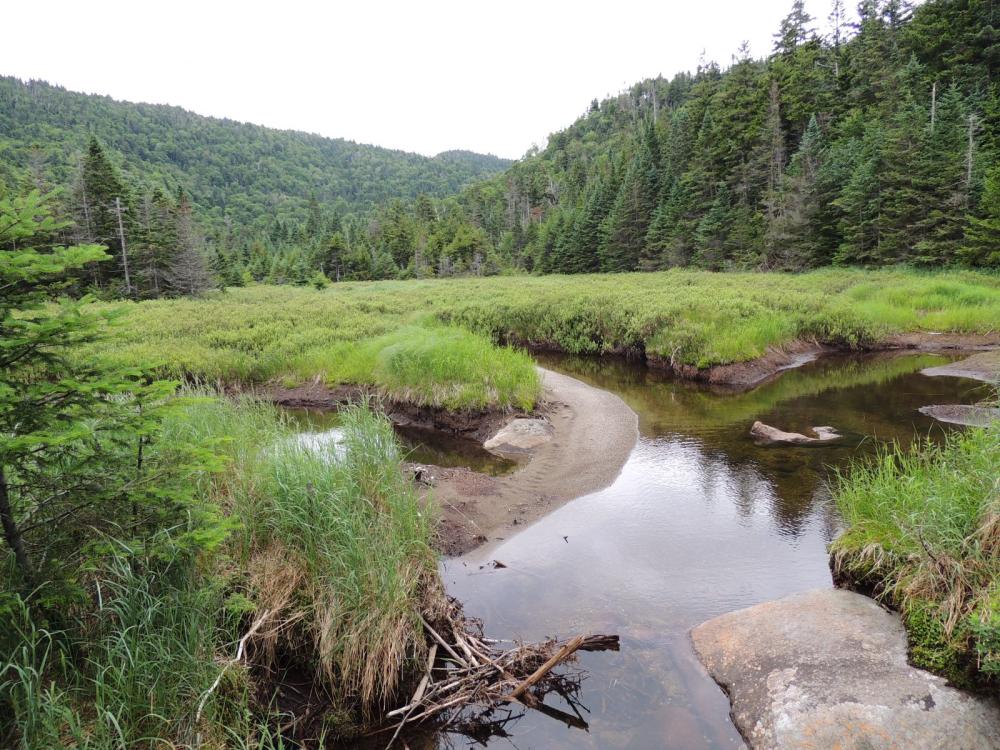 Layered in boulders and large rocks we hopped as much of it as we could. Some rocks were still damp from the night’s creation of mountain dew, making a few of them a bit slippery, but all in all this entire route is prime bushwhacking country. We moved along graciously as Wallface Brook was free of dead fall and the water level was low enough for super-ease thoroughfare along the passageway. Open rock slabs tend to be slippery culprits, but with a bit of care and a retreat or two to the forest edge we cured that embargo. Soon I knew we would see the “light at the end of the tunnel,” as I refer it. This is where the brook ascends steeply up a boulder strewn course and flattens out abruptly into a high mountain vly. But all the hiker can see is a bright light at the top of the cascade, this is where the true bushwhack begins and the brunt of the trip gets under way. 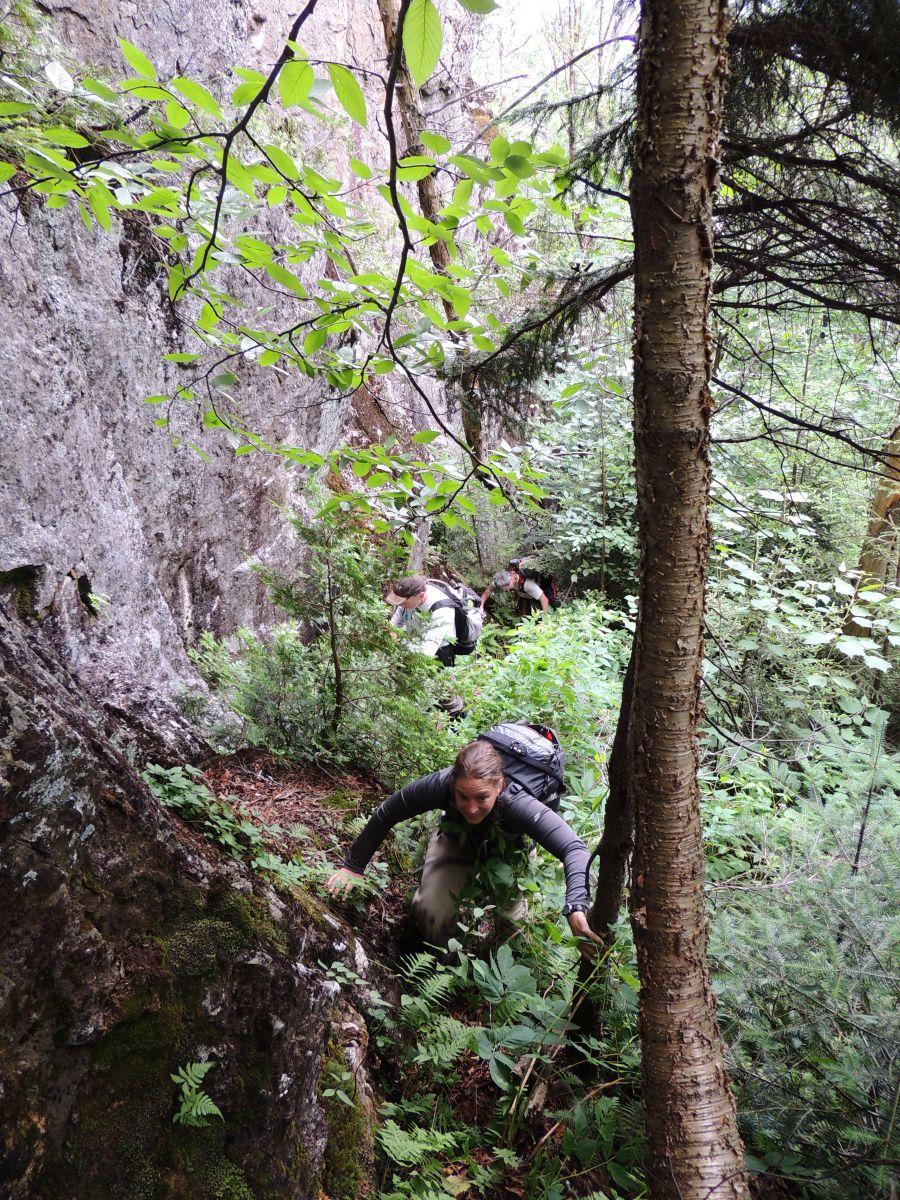 After another quick snack we dove right in. The vly is encased in a spruce thicket which is pretty typical for Adirondack wetlands, but generally speaking they don’t last all that long and this is just a case in point. There was about 200-feet of scratchy red spruce and rotted dead fall impeding our efficient movement but that would shortly open up to a much more open forest in a col between a low ridge and Wallface Mountain. 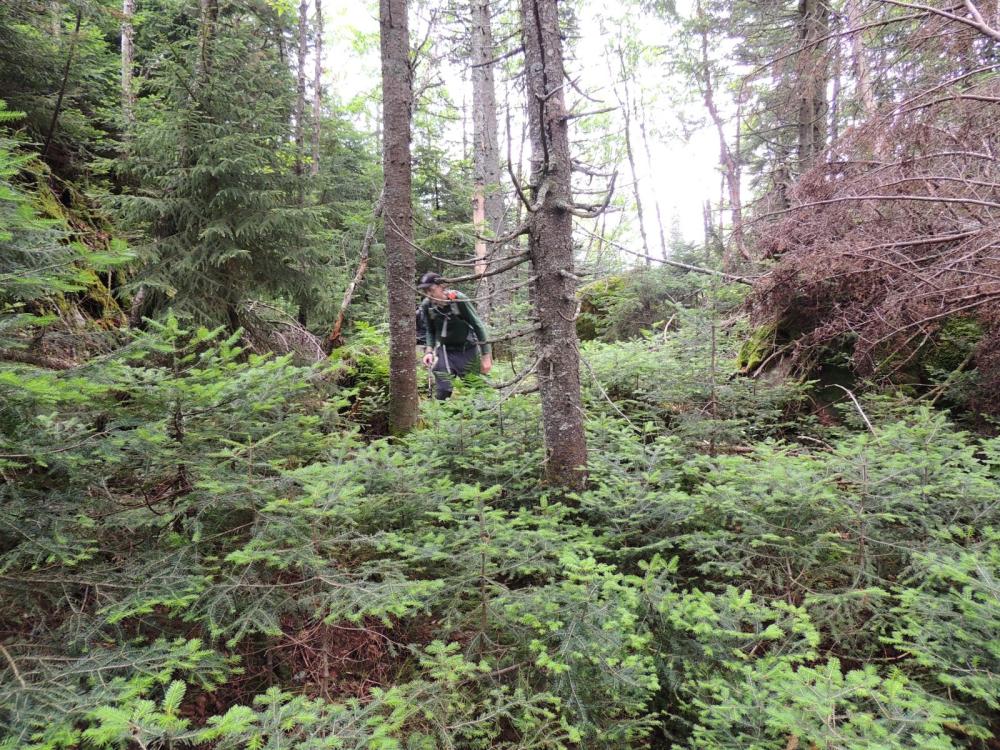 This col was actually pretty tough to move through as the floor was covered in rocks and average-sized boulders, and these solid pieces of unstable earth were also covered in a thick moss and a century of duff.  Careful foot placement was in order or the femur eaters would swallow us “hole.” With the help of neighboring trees we pulled ourselves up and to the base of a massive cliff which we would have to negotiate. I had been here before and knew what the protocol was; head left along the base and quickly gain elevation at a very steep pitch. Hugging the cool granite as the water seeped down from the mossy floor above us, we slowly progressed. Keeping close to the rock tends to remove thick tree growth and blowdown from the equation and in this case it is key to ease of travel. Now fully-immersed in the environment we aided each other over the final steep pitch through a narrow gully to a brilliant viewing area.

After we soaked in the views we knew it was only a matter of time before we would have to really get down and dirty and push through some thick landscape. The balsams and red spruce didn’t wait long  before they made their presence known by poking and prodding any portion of unprotected skin. Now on a flat upper shelf of the mountain, just below the true summit, we met up with a nearly impenetrable forest, all we could do is tuck and push our way through. 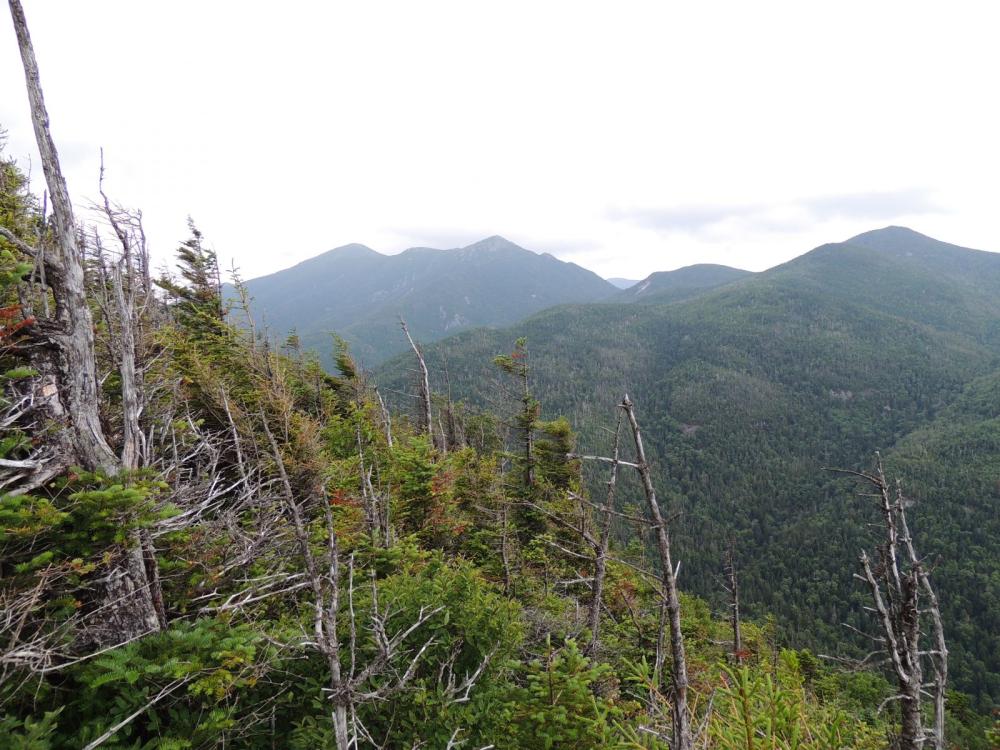 The final climb was before us, but now quite modest along the upper ridge; the forest opened up allowing us to breathe again without the intake of needles. The summit is not all that easy to locate as the ridge is very flat, but a boulder covered in dead trees and heavy moss will take the title. While no views exist at this very point, a small walk to the south/southeast brought us to a viewing area unmatched by too many other mountains. Granted there isn’t a whole lot of room for more than one person, so we took turns eyeing the views of the MacIntyre Range, which is one of the finest, that can only be appreciated by one’s own eyes.

Now down to Indian Pass

As fatigue set in we didn’t want to extend our sitting around time which could lead to muscle stiffness so we started our descent right after lunch. Now in the late morning, nearing high-noon, the clouds had really started to settle in and it was apparent we would be rained upon before the day was through, how much was the thousand dollar question. We were ushered down the opposite ridge toward the contrary end of Indian Pass by small seams of open forest. Dead fall would slow us down a bit but from previous times here I knew that if we hugged the cliffs to our right it wasn’t as bad, and actually quite scenic. Others in the group were a bit worried we would top a cliff and not be able to descend, or rather have to climb back up and out; I was not as concerned as my recollection of the mountain's features was still quite fresh. I can’t remember what I had for breakfast but I can remember the structure of a mountain face. 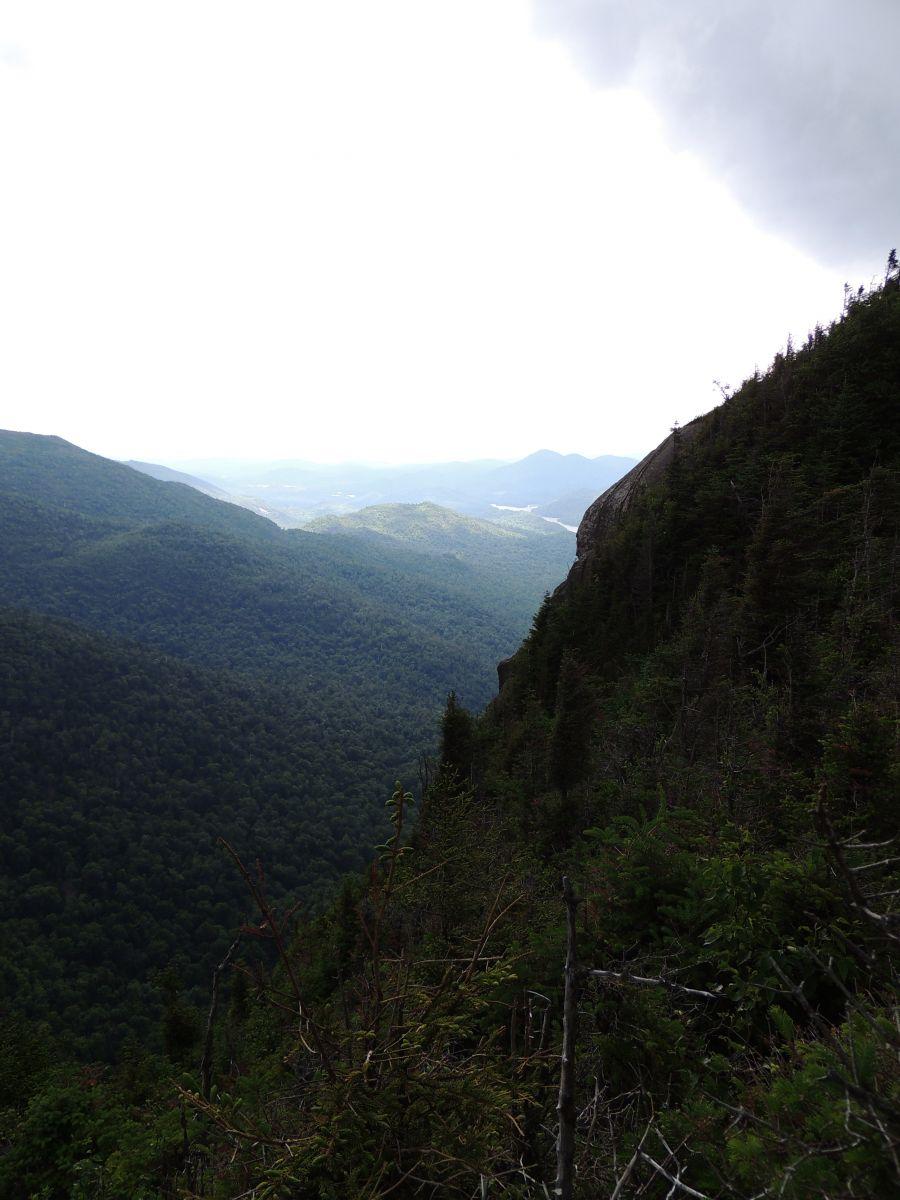 The descent came swift, and not far below the summit we popped out onto a secondary ledge, with views matching - if not topping - the summit views. Then it came... the rain. It was light but to get the trees wet all it takes is a slight drizzle and we would become soaked as we continued our procedure of violent exercise pushing our way down the summit. The forest didn’t hold us back for too long before it opened up to a much friendlier growth. We slowly worked our way down, still hugging smaller cliffs and dropping off others. Not far from the Indian Pass Trail we came upon an oddity in the forest and the only true sign of human existence. 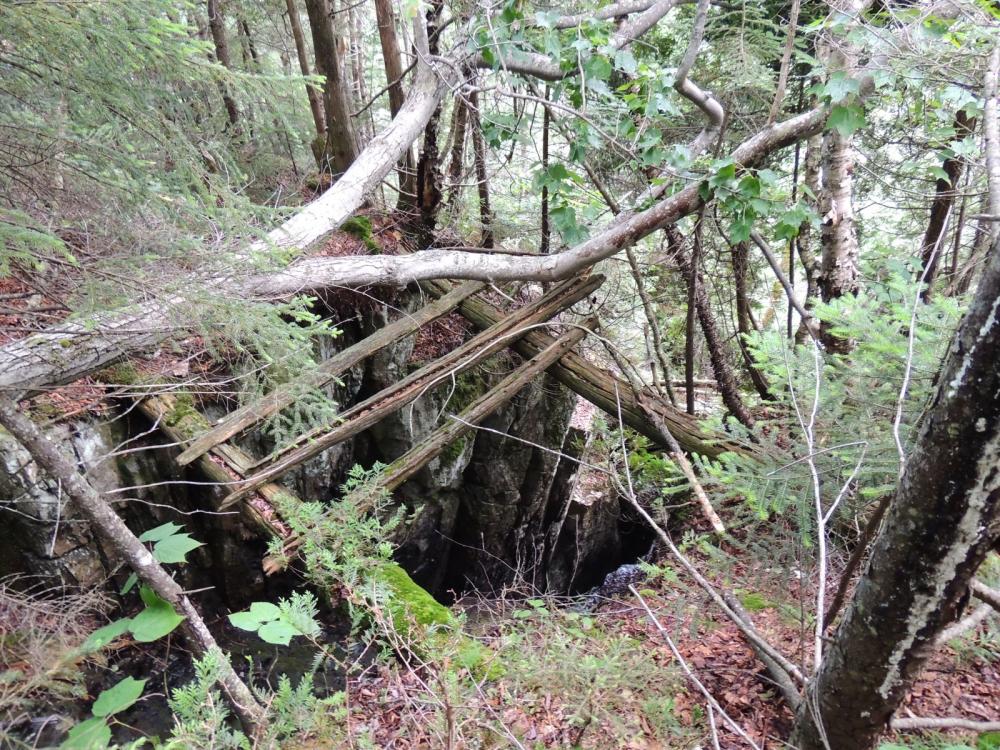 I remembered this spot, but up until now I couldn’t remember exactly where it was. We stood near an old bridge, constructed of trees, most of them fallen to the ground below, others rotting as we spoke. It spanned a deep dyke, or crevasse if you will, lined steeply with wet rock and ending on more. Not a bridge I would tempt fate on, but why was it there? We easily walked past on higher ground, so why was it necessary? Was this for some sort of logging equipment, a carriage, horses, or scenic value? It truly is an odd man-made feature in an equally odd location. The only thing we can visualize is an old trail that bypassed Indian Pass to access the mines at Upper Works.  We thought if we looked low that we could see a berm where a trail once existed, but then again it could be our overactive imaginations.

Soon we would be on the trail near where Indian Pass Brook comes in from high above at Scott Pond. The climbing is not over by any means, and if you have even been through Indian Pass, you know what I mean. The Indian Pass Trail is not a laid-back walk. The layout is heavily eroded and strewn with loose rocks and boulders. The rocks are slippery from days on end with no sun hitting them to dry them out. The red and brown slime making every third step trying and cautious, and to boot, it’s pretty steep and arduous at the end of an already tough day.

Eventually we popped out on the top of the pass and started the long descent on the opposite side. A quick break at Summit Rock, which is actually lower than the top of the pass, gave us the last bit of energy we would need to get back to Upper Works. Still a bit moist from the passing rain the sun was starting to peek through the trees, drying out our clothing a bit more. Also the fact that we could see the sun made it apparent we were getting out of the pass and back down along the brook in the valley. 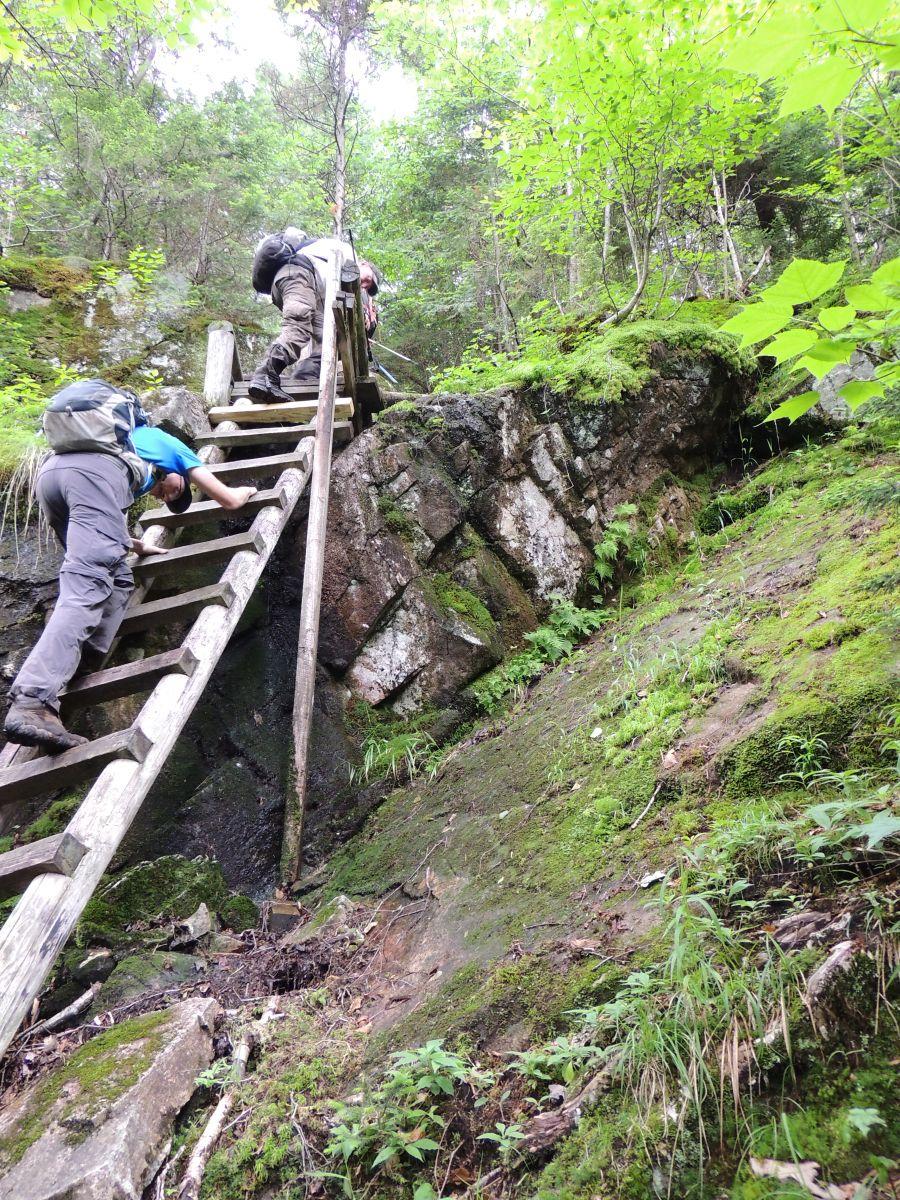 We passed by Wallface Brook where we started our bushwhack earlier in the day, and passed by Wallface and Henderson Lean-to’s without even a thought of stopping - we wanted out. The mud on the trail wasn’t even preventing us from forward motion, we walked right through. With boots already wet and socks surely soaked, we didn’t have a care in the world of the opposing liquid earth. The trail has a slight climb to it, which at the very end of a day like this is actually quite tiring and trying on the legs. A quick cleaning dip in the source of the Hudson was what we needed, and what we relished, and what we did. Now for the long ride home, surely we would have to make pit-stops along the way - as you can imagine none of us looked fit for a sit-down dining experience...  then again, this is the home of the High Peaks and a hiker's paradise - maybe we didn't look quite so out of place after all! 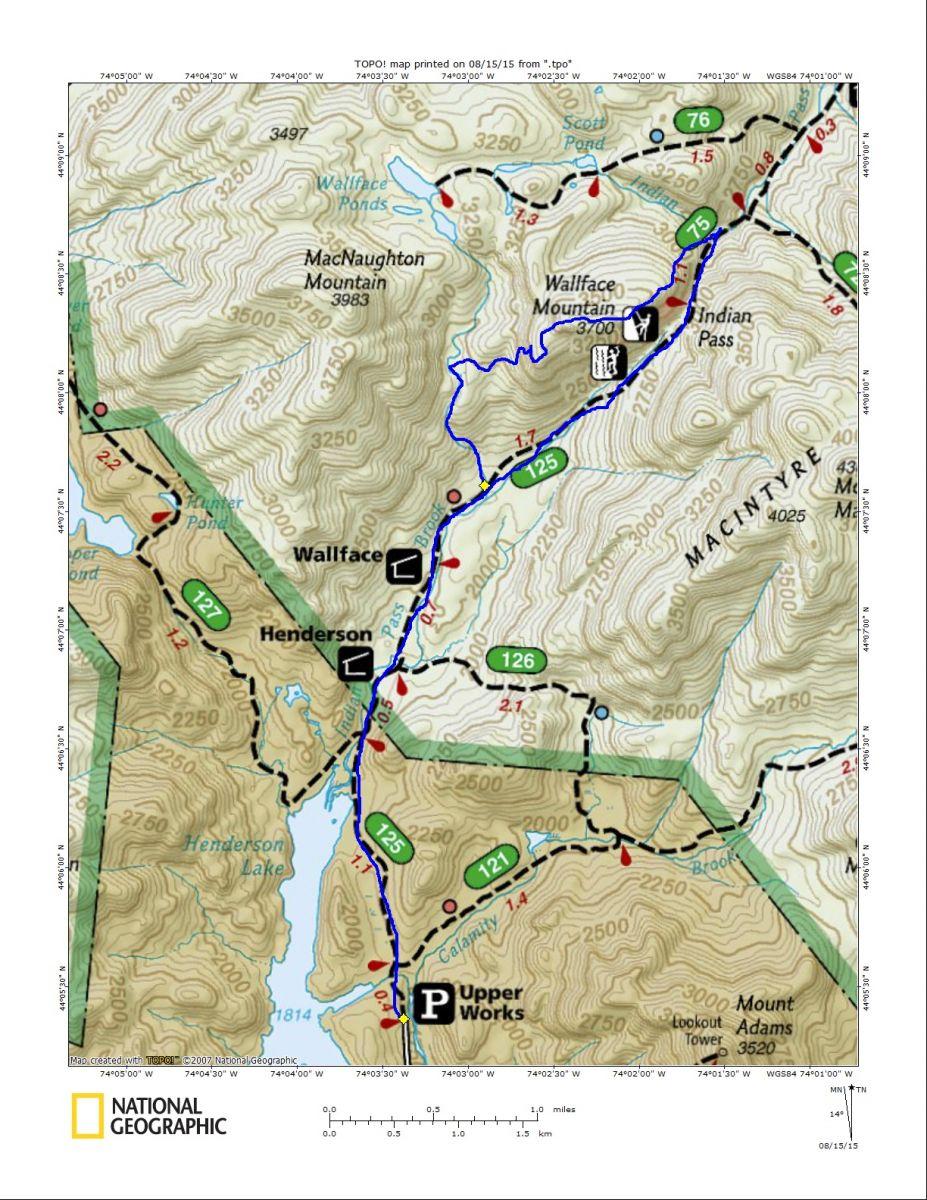