“Far above the chilly waters of Lake Avalanche at an elevation of 4,293 feet lies summit water, a minute, unpretending, tear of the clouds — as it were — a lovely pool shivering in the breezes of the mountains and sending its limpid surplus through Feldspar Brook to the Opalescent River, the well-spring of the Hudson.” - written by Verplanck Colvin, 1872, while surveying the Adirondack Mountains.

Highest source of the Hudson

The highest water source that feeds the mighty Hudson River is Lake Tear of the Clouds, located 1,000 feet below the summit of Mount Marcy, the highest point in New York State. 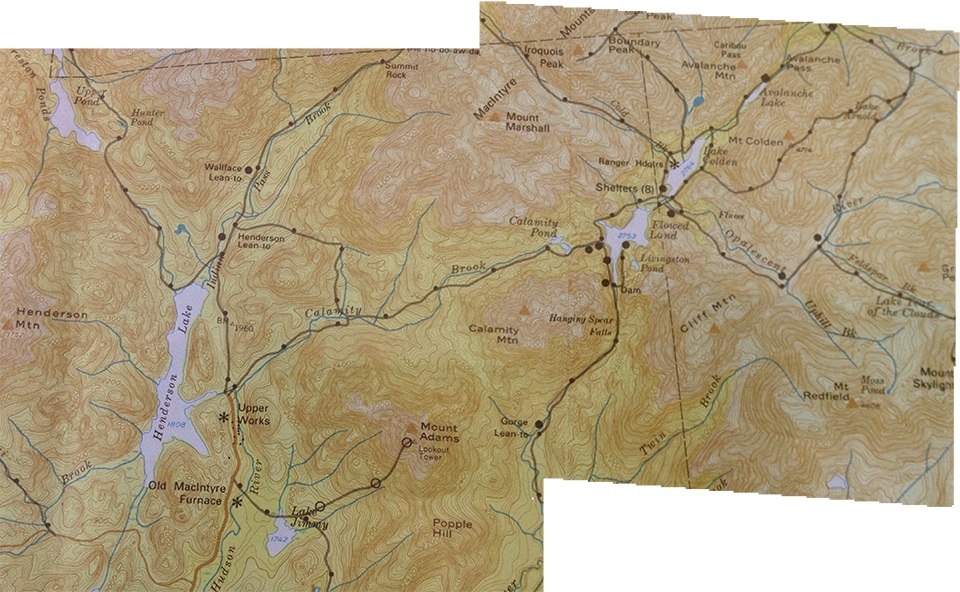 The waters flowing out of Lake Tear of the Clouds create Feldspar Brook. Feldspar then joins the Opalescent River which flows into Flowed Lands. Both the Opalescent and Calamity Brook flow out of Flowed Lands in different directions. The outlet on the east side of Henderson Lake becomes the very first stretch of the Hudson River.  Calamity enters the Hudson just east of that spot near the Upper Works. The Opalescent joins the Hudson near Tahawus Road, almost midway between Blue Mt. Rd and the Upper Works. The waters flowing into the Hudson have changed course slightly since the demise of the dam at Flowed Lands a few years ago, thus allowing the Opalescent, one of the major feeders to the Hudson, to take its natural course instead of being diverted by the dam. (Maps of the water courses are now slightly inaccurate due to the failure of the dam during Hurricane Irene.) The purpose of the dam, built during logging days, was to divert the Opalescent into Calamity Brook to power the blast furnaces for iron at the Upper Works near Henderson Lake. One can actually drive the upper stretches of the Hudson along Tahawus Road to Upper Works Road off County Highway 2B (Blue Ridge Road). The road takes you into the deserted Tahawus Iron Works "ghost town" where there is a parking area and trailhead into the High Peaks. From there, you'll have to head into the wilderness on foot to reach Lake Tear of the Clouds. If you do head into the wilderness on foot, make sure you are prepared for a long hike and bring the proper gear with you. 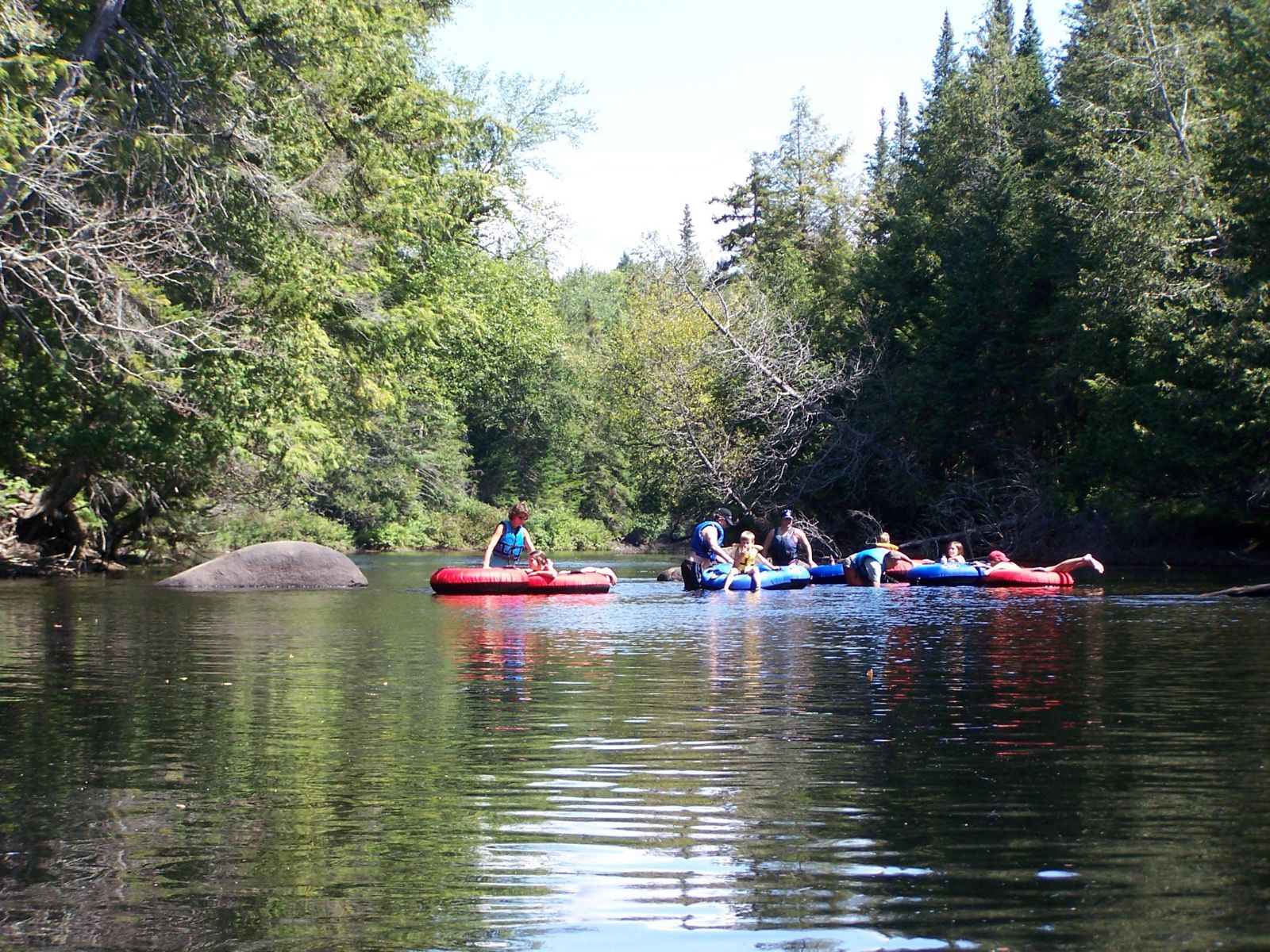 Above: Floating along the upper reaches of the Hudson River near Newcomb

Mount Marcy and Tear of the Clouds are both located in the Town of Keene, in Essex County, in the Northern region of New York State.  Lake Tear sits in a formation known as a col. Col comes from the latin word for neck (collum).  A col is also known by the term “pass” as it is the lowest point of the ridge that connects two mountains. Lake Tear is located in the col separating Mounts Skylight, Redfield and Marcy.

In spring and early summer Lake Tear is filled with snow melt and rainwater. As summer progresses, this alpine zone pond becomes more like a bog as water evaporates over the hotter months. It is only about 3 feet deep at the most. Sounds kind of unimpressive as the source of such a mighty river as the Hudson. However, the Hudson River watershed is far reaching into many areas including the Catskill Mountains, located in the central part of Eastern New York State. Hundreds, if not thousands, of small streams and creeks flow into it along its entire length. 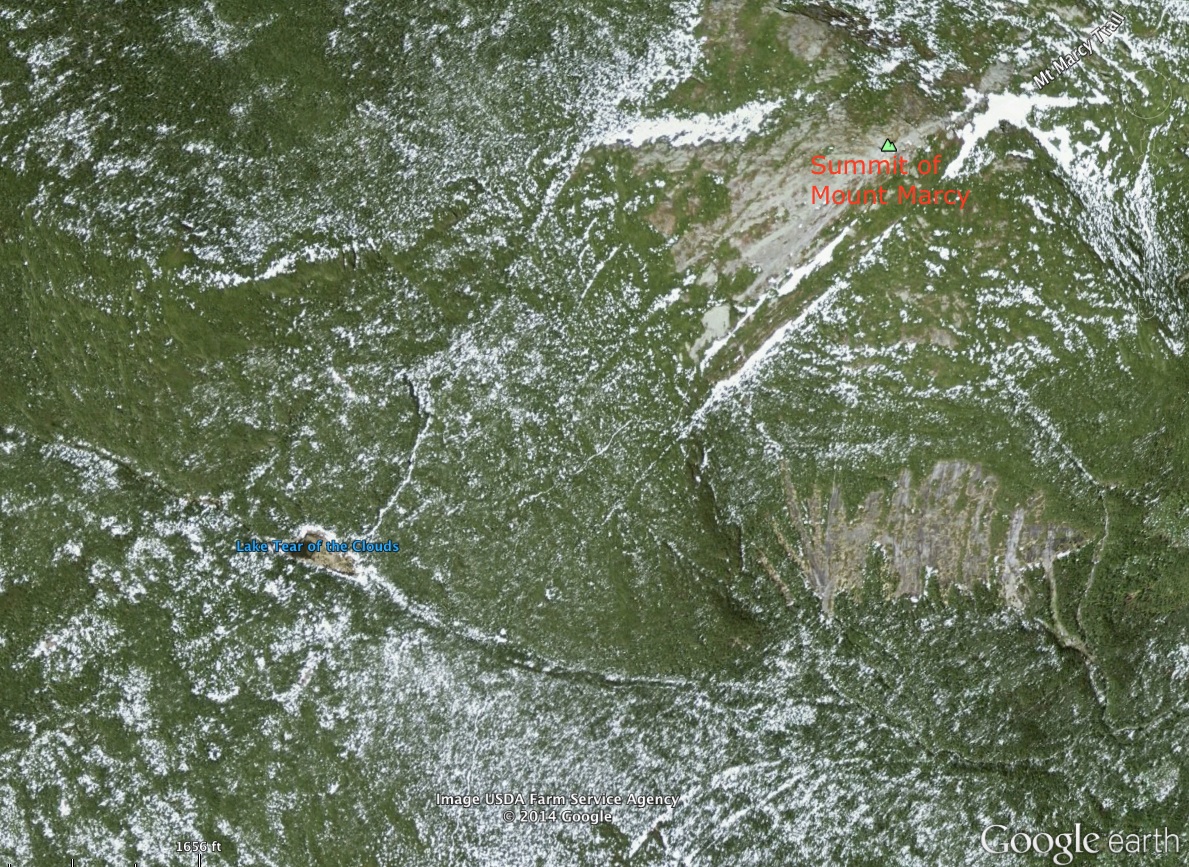 The forests along The Hudson's route filter some of the cleanest water on the planet, flowing into the Hudson from all directions. Maintaining our wild forest lands is critical not only for the enjoyment of our residents and scores of visitors each year, but for the health of the watershed that provides drinking water to millions of residents along its 315 mile route. So you see, wilderness has many purposes and benefits far reaching the obvious.

As far as anyone knows, Verplanck Colvin and William Nye, a guide from North Elba, were the first white men to discover Lake Tear of the Clouds. Obviously others had at least viewed the little alpine pond from the summit of Mt. Marcy, but no one had taken the time and effort to explore it until Colvin. Previous hikers had assumed Lake Tear flowed into the Ausable River Valley, but Colvin’s visit proved that theory incorrect. It flowed to the south and not the north or east. 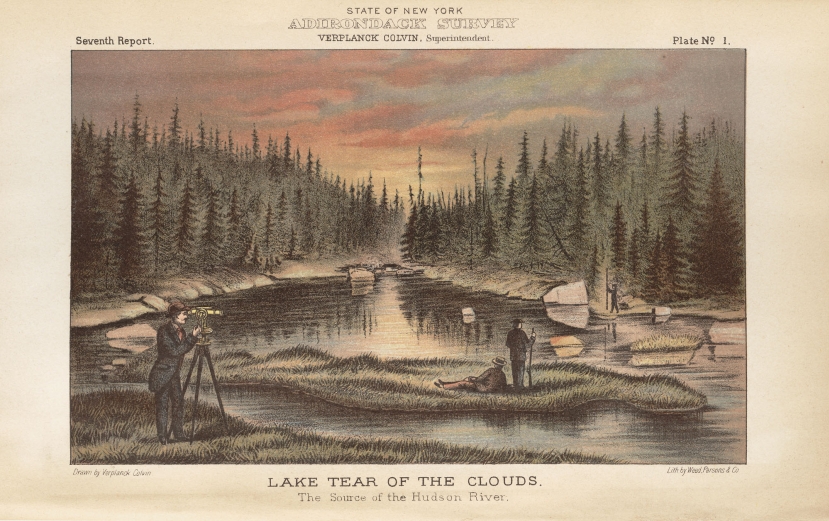 Not long after Colvin’s first visit, Orson “Old Mountain” Phelps and his group of explorers built the first trail to Lake Tear of the Clouds in the mid 1870’s. Phelps was not fond of the name Lake Tear of the Clouds, calling it “namby pamby”. He had named it Perkins pond in honor of artist Frederick S. Perkins.  Obviously Lake Tear won out.

Lake Tear of the Clouds also played an important part in our United States History. It was at Lake Tear that Vice President Theodore Roosevelt was notified that President McKinley was dying of gunshot wounds sustained a couple of weeks before. Roosevelt, along with most others, were under the assumption that McKinley was recovering nicely from the wounds he sustained. While Roosevelt was hiking far into the Northern New York wilderness McKinley took a turn for the worse and Roosevelt was summoned.  Upon emerging from the wilderness he learned McKinley had died and he was about to become President of the United States. He was sworn in as President of the United States within 24 hours. 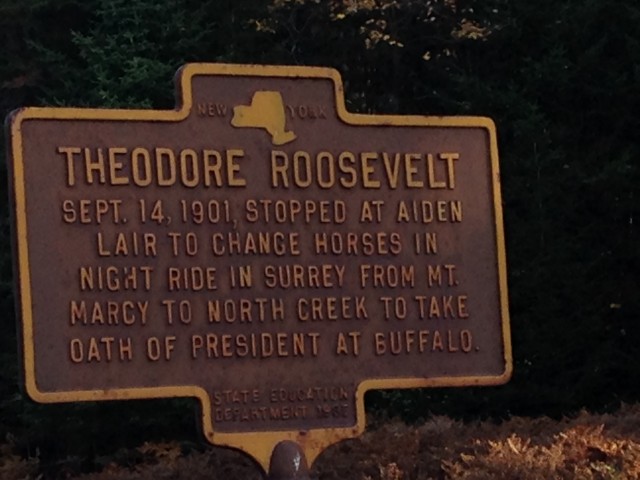 In 1998 the Hudson was designated an American Heritage River. From its humble beginnings far up on the side of a remote and lofty mountain, to the path it takes through the Hudson Valley, which played an enormous roll in American history, it is comforting to think that the mighty Hudson is as mighty as it is due to the foresight of those who chose to preserve such magnificent wilderness lands. The future of our wild lands depends on all who live, visit, advocate for, and maintain them. Be kind to the land and it will provide for you. 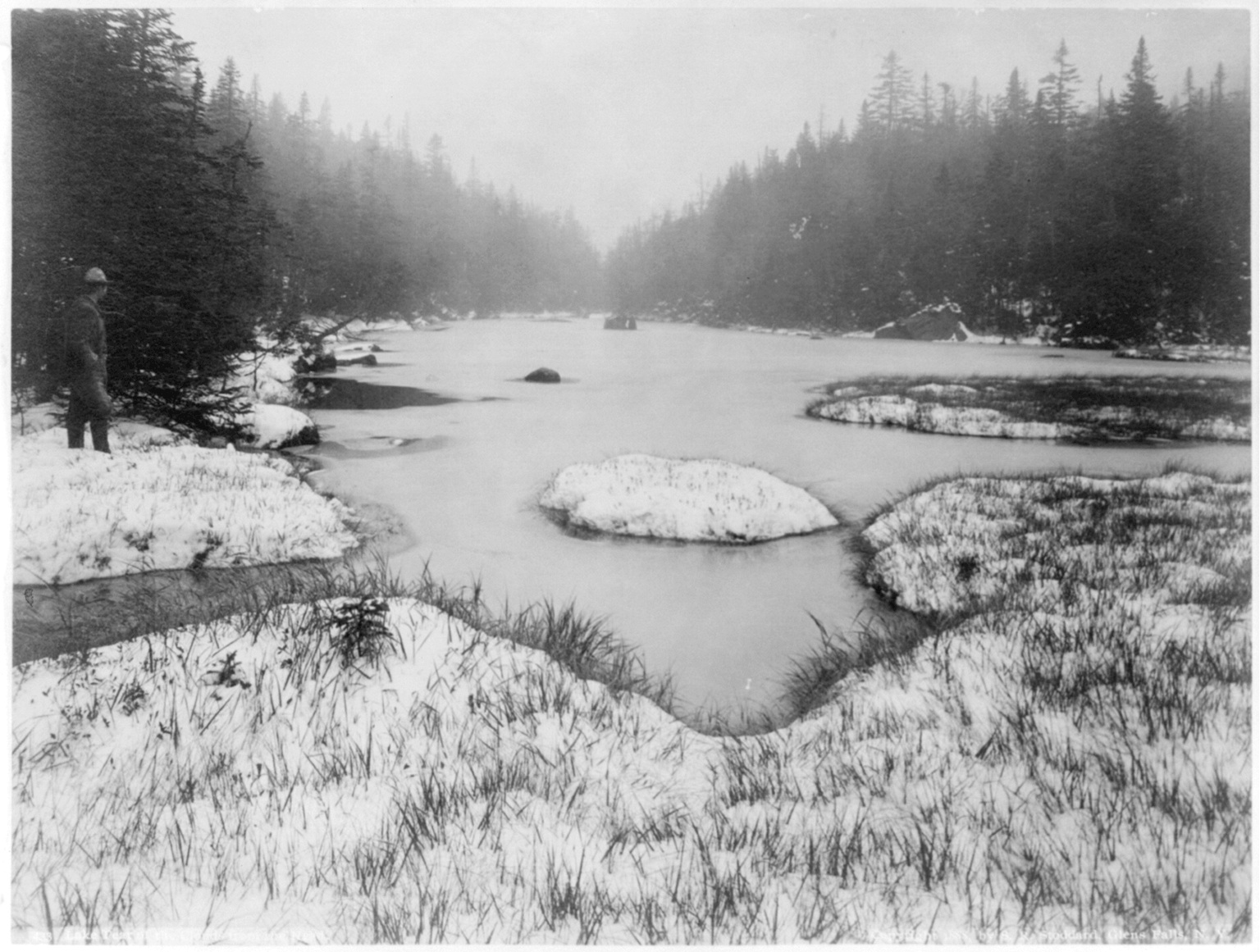 Above: An early image of Lake Tear of the Clouds taken by Senecca Ray Stoddard

Take a hike to Lake Tear, perhaps as a detour while climbing one of its neighboring high peaks.  You’ll want to spend a couple of days either camping in the High Peaks or in the region as well, so browse our lodging pages for options in Lake Placid, Keene and Keene Valley.