You came to the Adirondacks to bag a peak, but when the morning of the big hike arrives the clouds are so low you might as well be in Ohio. Don’t fret — there’s more to these mountains than rocky crowns and open ledges. The forests here are wet, and during all but the driest of summers there’s water everywhere, trickling across the higher elevations and building to impressive proportions as it crashes into our valleys. The most thrilling way to see this is by visiting one of our waterfalls, and there are a lot to choose from. Some require a full day hike, but the three below are all within a short distance from the road. Check those off of your list, then read on to learn about one of our favorite hikes, a long loop that takes in several falls and a mountain lake. 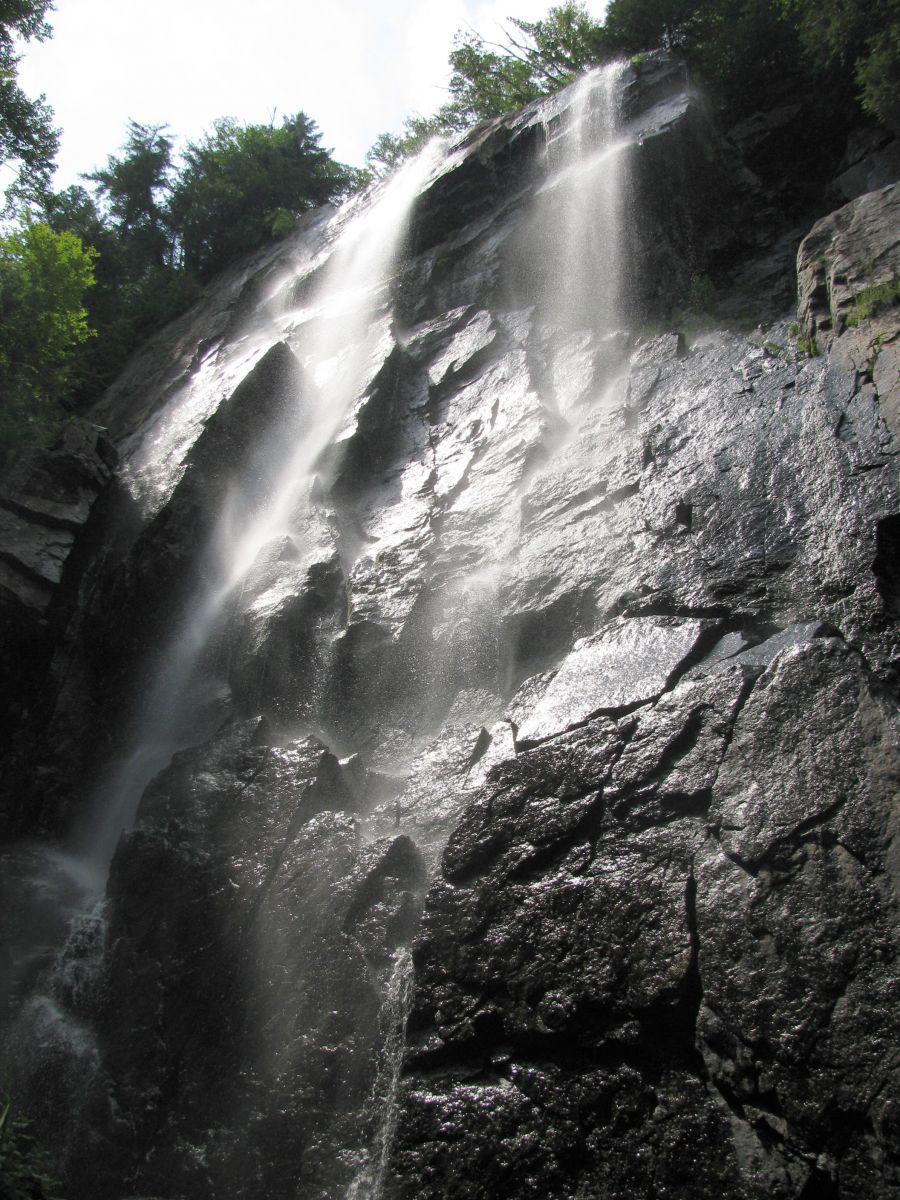 A trio of roadside falls

If you’ve ever noticed a waterfall towering above the treetops on the stretch of Route 73 that steeply ascends the pass between Giant and Dix mountains in Keene Valley, then you’ve seen the top of Roaring Brook Falls. This towering waterfall drops 300 feet over two pitches as it pours off the base of Giant Mountain. Getting there is easy. From the large parking area, walk along the mostly flat trail and bear right at the intersection. You’ll pass some nice ledges and boulders before rounding the bend to come face-to-face with the waterfall, about 0.3 miles from the parking lot. 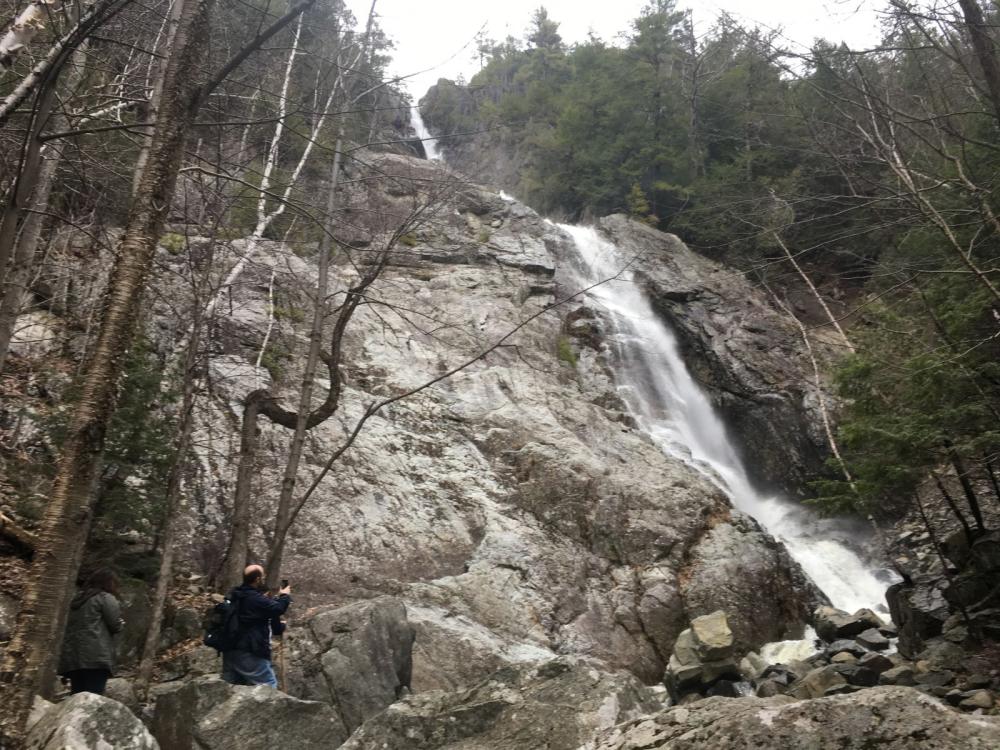 For a longer hike, bear left at the intersection and head uphill. After about a half mile there’s a trail on the right that leads to the top of the falls, where there’s an incredible view of the Great Range. Be extremely careful here and stay away from the edge — it is hard to gauge where the top of the rounded ledge actually drops off and it’s a long way down. Avoid this area when the rocks are wet or icy.

Getting there: From Lake Placid, head west on Route 73. In Saint Huberts, look for the large Giant Mountain/Roaring Brook parking area on the left and park there.

Cascade Falls can be seen from Route 73 as it travels through the stunning Cascade Pass, but to get the full effect drive down to the spit of land that separates Upper and Lower Cascade lakes and hike to them. There is no designated path to the falls, but what’s there is easy to follow and it’s a short walk. 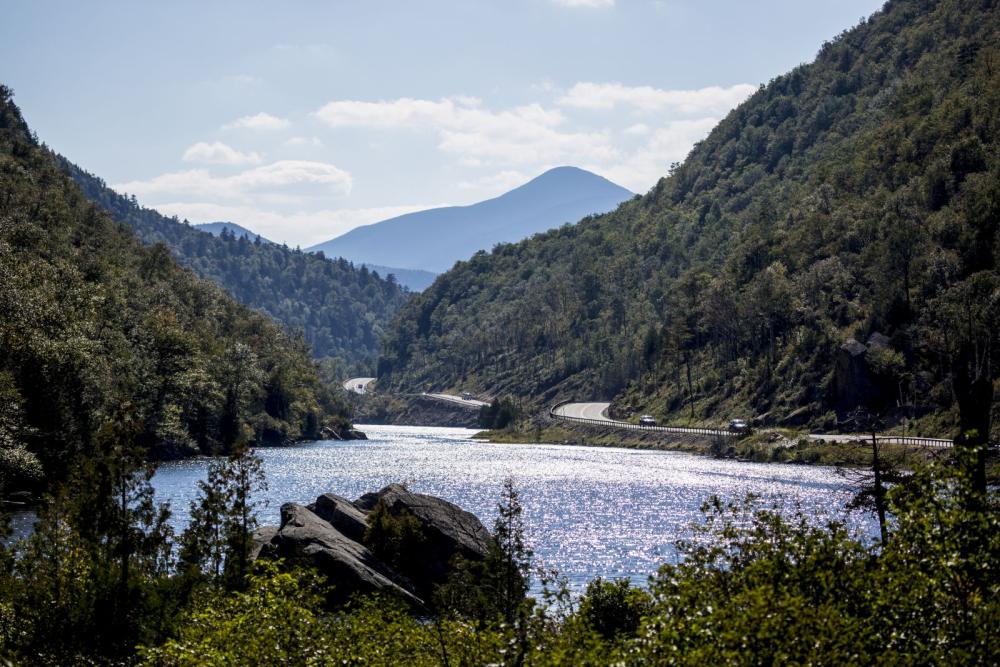 Find a place to park where your vehicle isn’t blocking the main driveway and head toward Lower Cascade Lake — it’s on the left as you’re looking toward the falls. Cross the bridge and you’ll see a path heading straight toward the waterfall. Take it and you’ll soon emerge onto the base of the slide path, a wide, jumbled mess of logs, rocks, and boulders. Head up and away from the lakes and you’ll soon reach a large knob of rock that can easily be climbed for a fantastic view of the falls. Intrepid explorers can continue on to the base of the falls without too much trouble, just be careful of loose rocks and slippery surfaces as you go. And while you’re watching the ground for your footing, check out some of the rocks along the way. There is enough variety here to keep any geology buff busy for an afternoon. 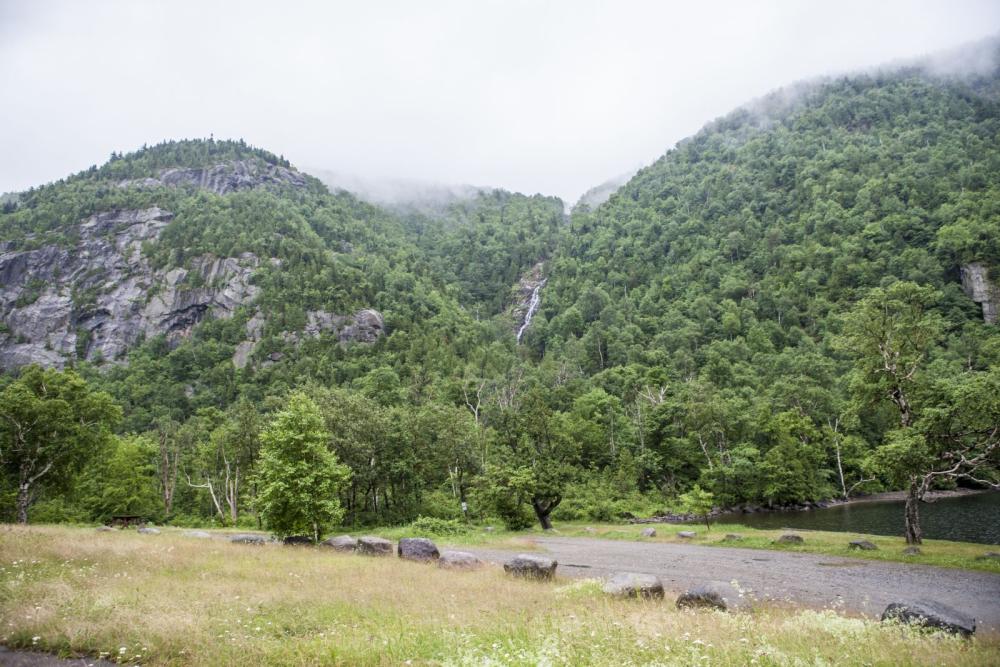 After returning from the falls you could hit the road, but that’s not recommended — a place like this deserves to be properly savored. Pick one of the lakes and go for a swim, take a paddle, have a picnic, or do all three!

Getting there: From Lake Placid, head west on Route 73. After the Cascade Mountain trailhead, look for the driveway on the right. It’s immediately after Upper Cascade Lake, about 8.5 miles from Lake Placid.

Deep in the heart of Wilmington Notch, the ruggedly narrow cleft between Lake Placid and Wilmington, is the Wilmington Flume. When the Ausable River is high you can hear its roar from the parking area, but it takes a short walk to actually see this impressive gusher up close.

To get there, carefully cross the road and take the walkway across the bridge. It’s made out of a metal mesh, so the faint of heart might find peering straight down at the rocks below intimidating. To see the Flume, simply look downriver — it’s impossible to miss. The water here is forced through a narrow channel in the rock, so the faster the river is moving the farther it shoots from the top of the dropoff. At times it almost looks like a horizontal waterfall. 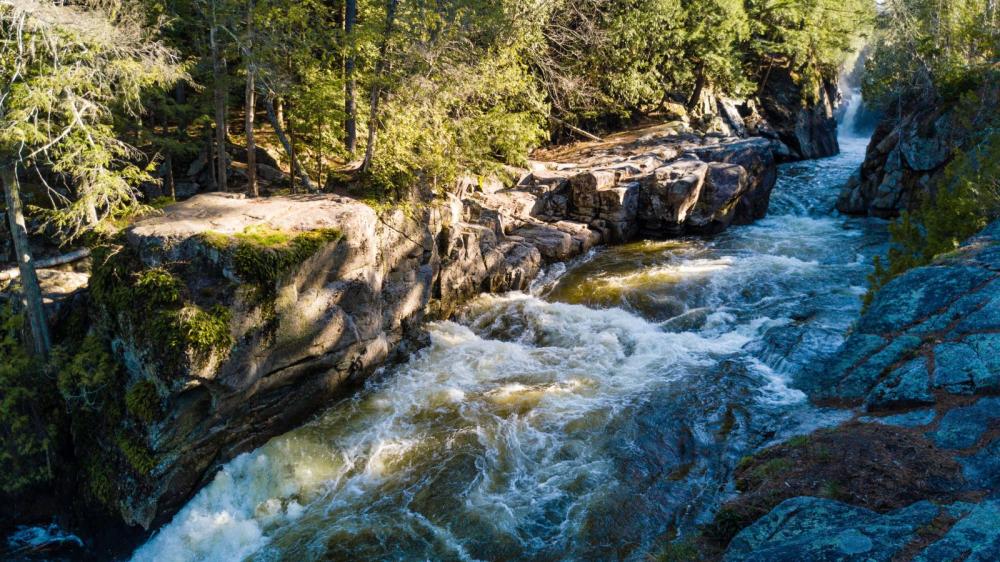 To see the Flume head on, cross the bridge and follow the dirt road to the left. Various paths lead to the edge of the gorge, where the waterfall can be viewed in all its glory. Use extreme caution when walking through this area, as there are no fences or railings to prevent the unwary traveler from slipping into the raging waters below. If the ground is wet or icy, avoid this place until things dry out.

The Flume can also be seen from a distance by continuing past the parking area and pulling into the large pull off on the right. A short path leads to the mouth of the gorge.

Getting there: Take Route 86 east from Lake Placid and look for the Hungry Trout Restaurant on the left. The Flume parking area is on the left immediately after the bridge, about 10 miles from downtown.

A waterfall tour by foot: the Rainbow Falls loop

This is a long but relatively easy 8.5 mile loop to a series of waterfalls that’s capped off by an amazing view of Lower Ausable Lake and Rainbow Falls. One important note about this hike is it’s on the Ausable Club’s property, so please respect the owners' wishes and do not camp or bring a dog on these trails. 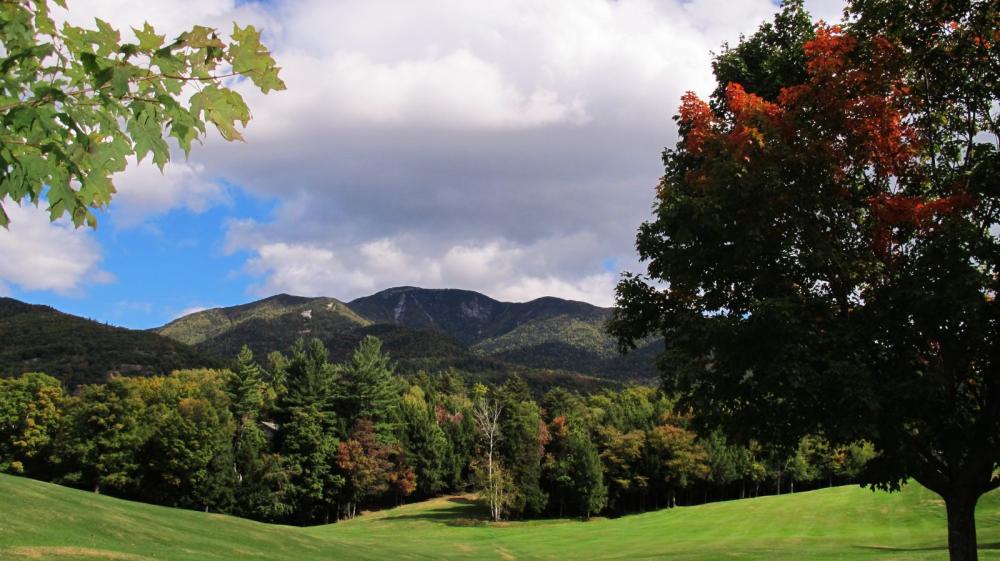 From the parking area, hikers must follow the road through the golf course and bear left before the main Ausable Club building to get to the huge, ornate wooden gate that marks the trailhead. Before heading out, take advantage of the map that’s posted in the kiosk by the gate. If you don’t have your own map, snap a photo so you can reference it later.

The first half of this hike follows the dirt road as it gently gains elevation. After about 2 miles there is a small wooden sign on the left with “flume” written on it. Follow the side path and you'll come to a nice little Y-shaped waterfall that shoots between mossy rock walls into a deep, jade-green pool.

After the flume detour, the road continues to gain elevation before making a quick descent to Lower Ausable Lake, which stretches between the cliffs on Sawteeth and Colvin to create one of the most dramatic non-summit views in the Adirondacks. Cross the bridge and you’ll see a sign pointing the way to Rainbow Falls. It’s a short walk so be sure to check it out! 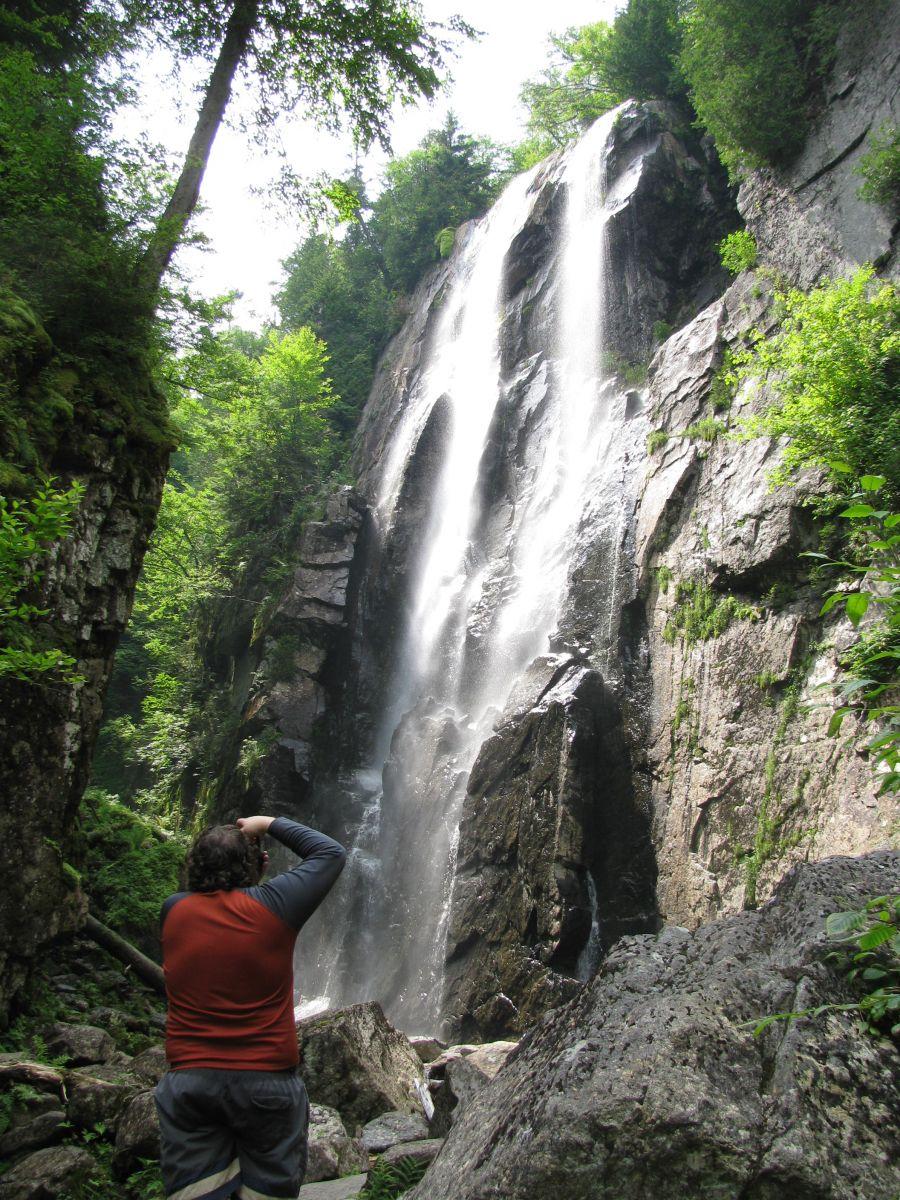 The fastest way back to the parking lot is to return via the dirt road, but if more waterfalls sound appealing, follow the West River Trail. Some of the falls here are huge, like the one that powers through a particularly wild section of the Ausable, while others are calmer but no less idyllic. Beaver Meadow Falls streams off of Gothics, and another unnamed waterfall pours from the cleft between Upper and Lower Wolf Jaw mountains.

After you’ve had your fill of falls, complete the loop by following the signs back to the Ausable Club.

Getting there: Follow directions for Roaring Brook Falls, but instead of turning left into the Giant Mountain parking area turn right onto Ausable Road and park in the lot on the left.

Nothing goes better with a hike than a trip into Lake Placid for a hearty meal and a cold drink!