The Sawtooth Mountains occupy one large tract of land located in the Western High Peaks Wilderness, just east of the Seward Range. There are not too many people who know what they are looking at from the summits of the Sewards or the MacIntyres, but most do recognize its vast wildness. However, there are many who recognize the name Sawtooth Mountains and know it to be about as secluded and rugged as it can get in the Adirondacks. Just don’t get it confused with the 4,150-foot Sawteeth, the High Peak above the Ausable Lakes. There really is no comparison.

As one of the most secluded tracts of land in the Adirondacks, the Sawtooth Range has gathered my interest in visiting as many of its peaks as I can. So, one day I sat down and looked over the mountains on a detailed USGS topographic map and tried to locate the most prominent summits. Those would be the ones I'd visit. I didn’t use any guidelines other than features to make my decision, and I came up with 22 summits that I wanted to explore.

This brings me to my latest adventure, Sawtooth #22, the smaller of the chosen ones. It needed to be a shorter day as my buddy Mike had to be back in town for one o’clock, and I was happy to oblige with this short adventure. He seemed game, so I picked him up the next morning and off we went. 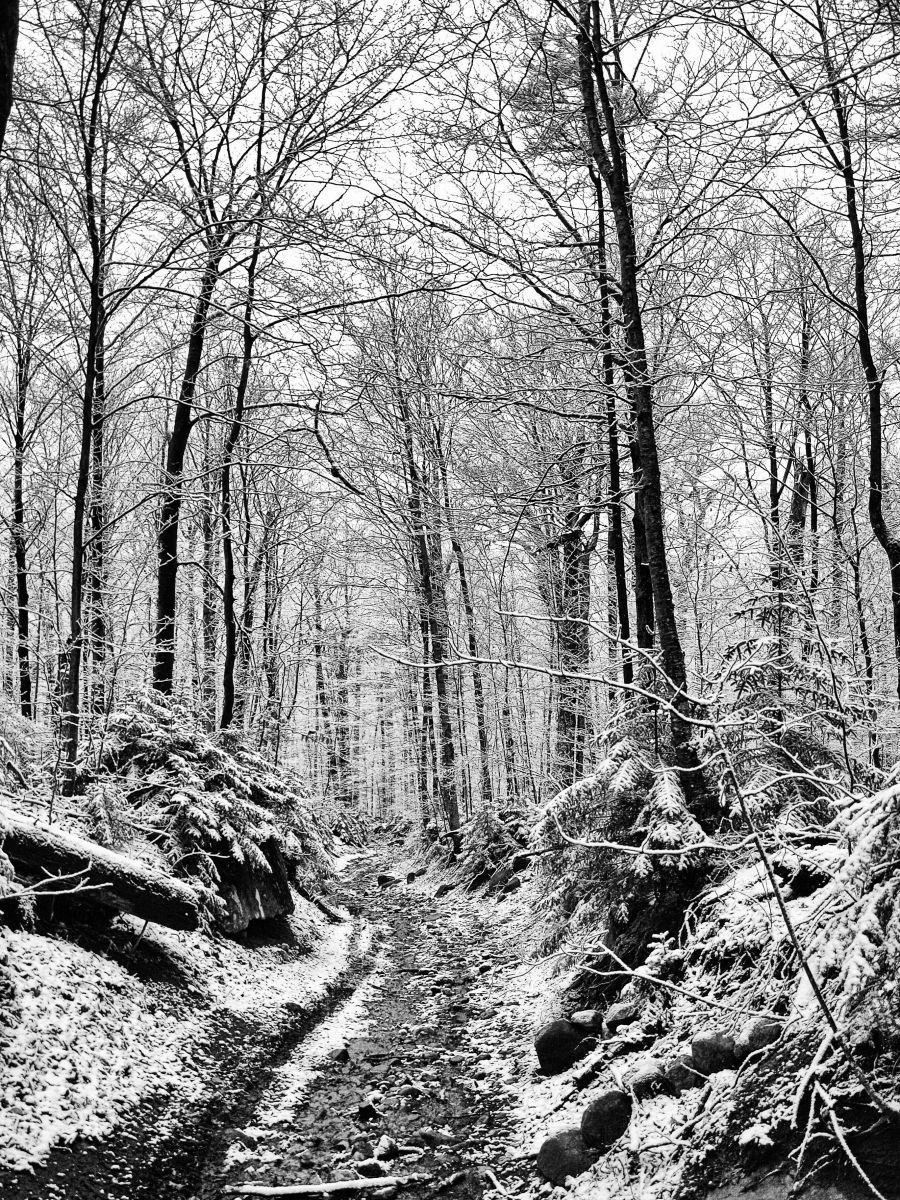 We had just enough flurries overnight to drape the forest in a veil of white. Beyond the leafless trees was a gray and featureless sky. The views would be limited if the sun couldn’t burn through, but my devotion to the exploration of the Sawtooths made the conditions not matter.

Upon arriving at the Pine Pond trailhead, we quickly realized this might be a wet venture, at least during the initial stages of the hike. The Pine Pond Trail would bring us to an old woods road, which would then take us to another old woods road that would, in my mind anyhow, get us fairly close to the base of Sawtooth #22.

The undulating course of the Pine Pond Trail got our blood flowing, and we quickly started to remove our winter dress. The trail showed signs of excessive ATV traffic and was a mud heap with streams of running water in spots. The mud pits were rather outsized in areas, mimicking small ponds but easy enough to get around. At about 1.3 miles from the trailhead we were at the woods road. This old passage has since been turned into a footpath, and as it enters the High Peaks Wilderness it is well marked as no motorized vehicles allowed. Apparently that doesn’t deter some. 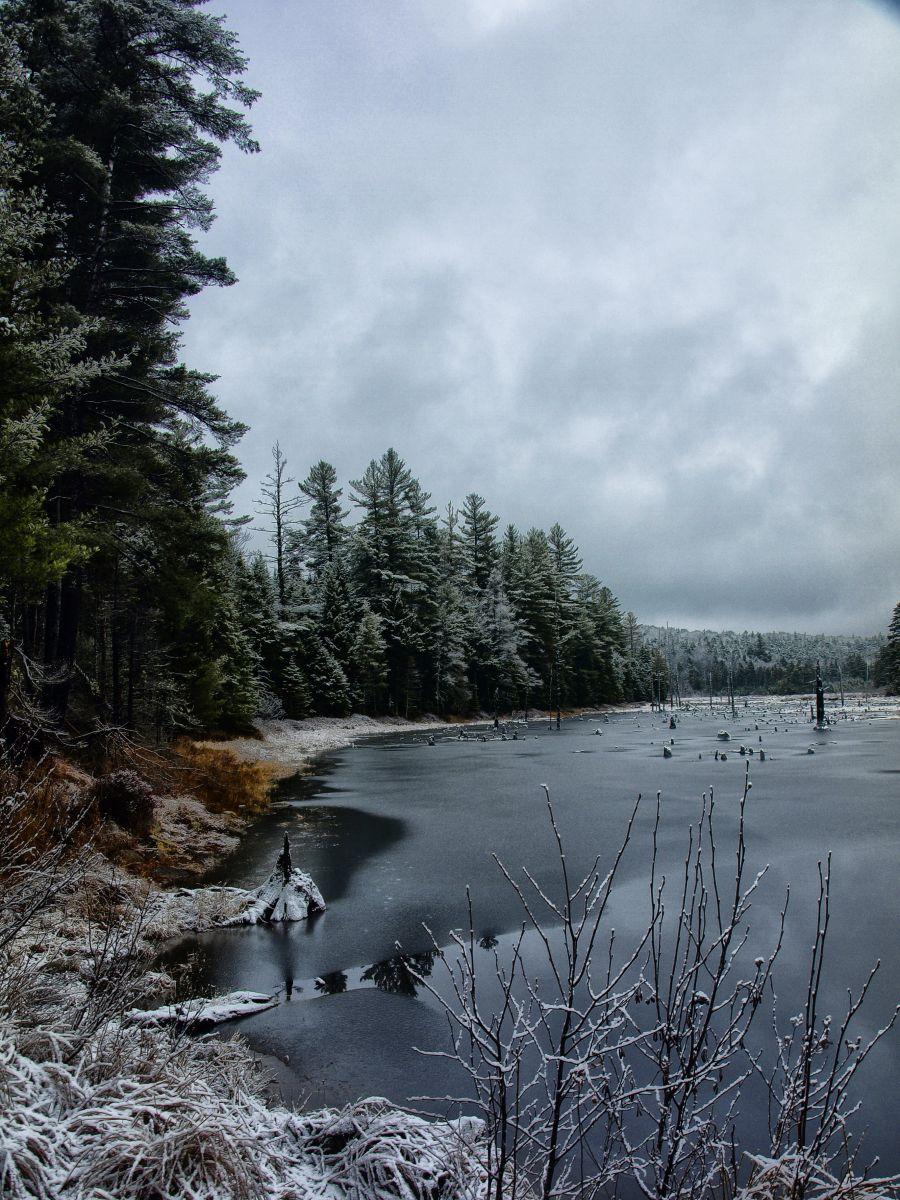 Now on a nice path, we didn’t have to compete with the muck and mire of rutted tire tracks and could hike without too much deviation. In a relatively short amount of time we came to the beaver pond that always pleases the eye and offers a wonderful chance for photography. This day was an exceptional one. The waters were partially frozen and the amber grasses waved through the light coating of snow.

From the pond, we continued on the carriage road to where it splits into three separate destinations. We went right along a much less obvious path; the secondary woods road I mentioned earlier. 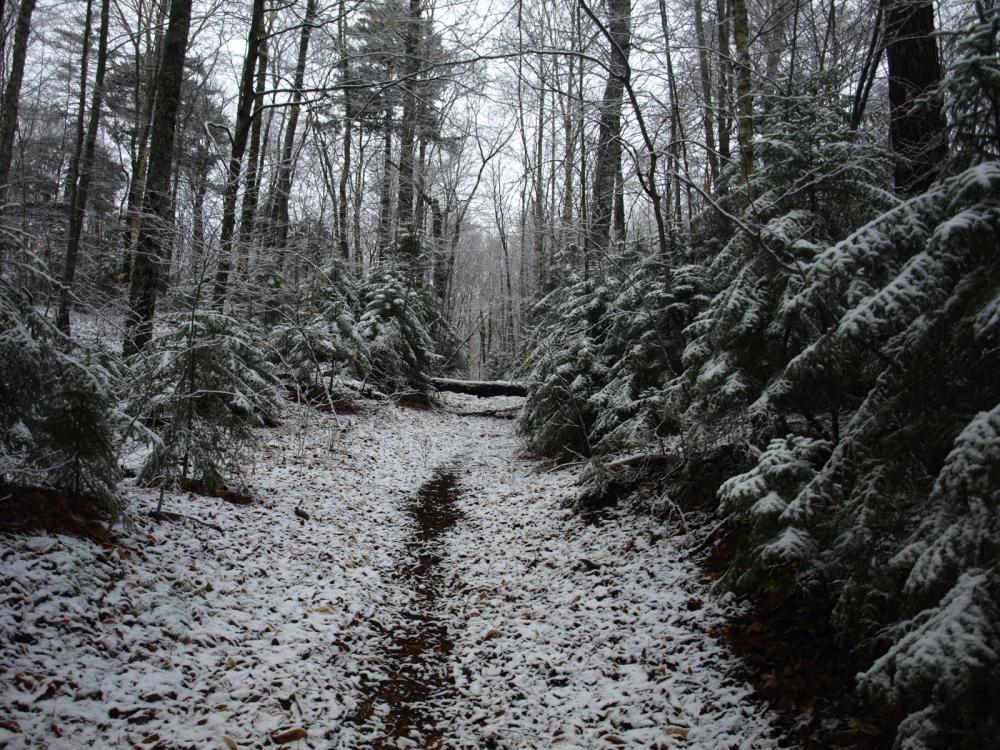 Mike and I were now locked into deep conversation about why these old roads were there and the purpose they serve or served. Our only conclusion was hunting camps; not current, but ones of Adirondack history. We figured they must still serve a purpose as the tread appeared to still be used frequently enough to develop paths around the deadfall. Soon the mountain we were destined to climb was before us, and the carriage road kept drawing us closer and closer. Now heading right, we climbed steadily up the shoulder and into a saddle, where we started to skirt the base of the mountain. Now we had to go cross-country.

The forest grove of beech and maples was a welcome sight as history has shown me that the Sawtooth Mountains can be very rugged and dense with fir and spruce. My instincts always follow the path of least resistance, but in this case there was no resistance so we simply followed the rule of up and start ascending the slopes. The summit resided not much higher than us and the grade was so delicate that we didn’t falter in our forward approach. As we drew nearer more rocks and outcroppings started to appear, resembling more of what the range portrays, but the forest still wasn't thick. 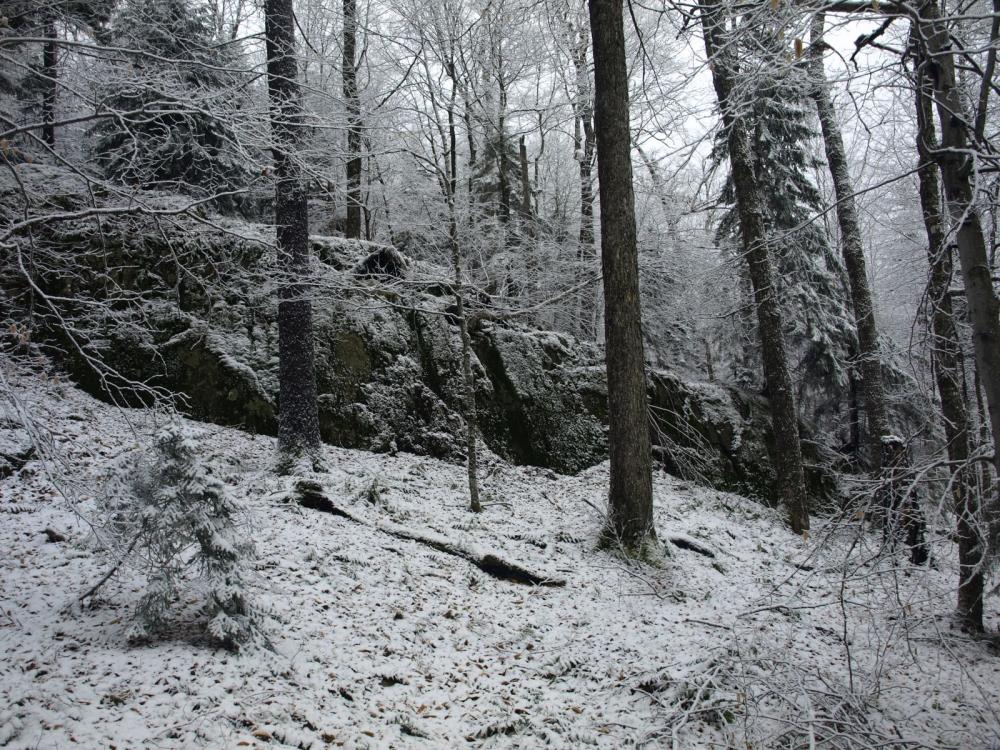 Now standing upon the partially open summit, we were slightly disappointed that no views welcomed us. Even with additional searching I could only locate a peek-a-boo view of Alford Mountain, and that was clouded over to only a dark outline. The summit was atop a long expanse of rock with a shallow valley that called out to us to explore. Who were we to argue? 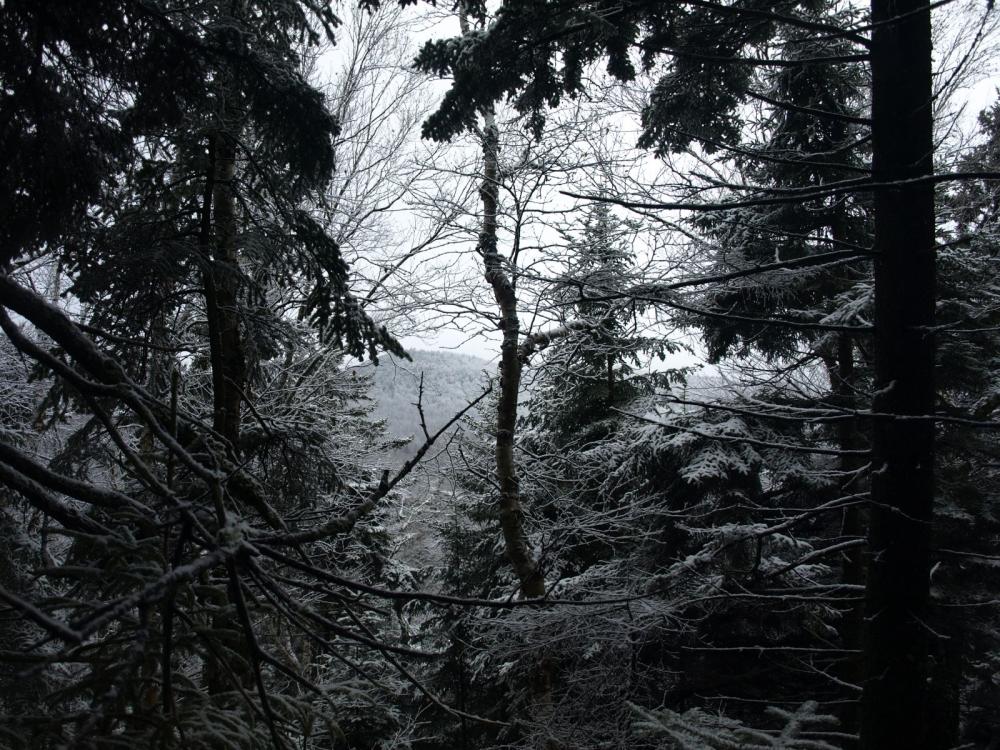 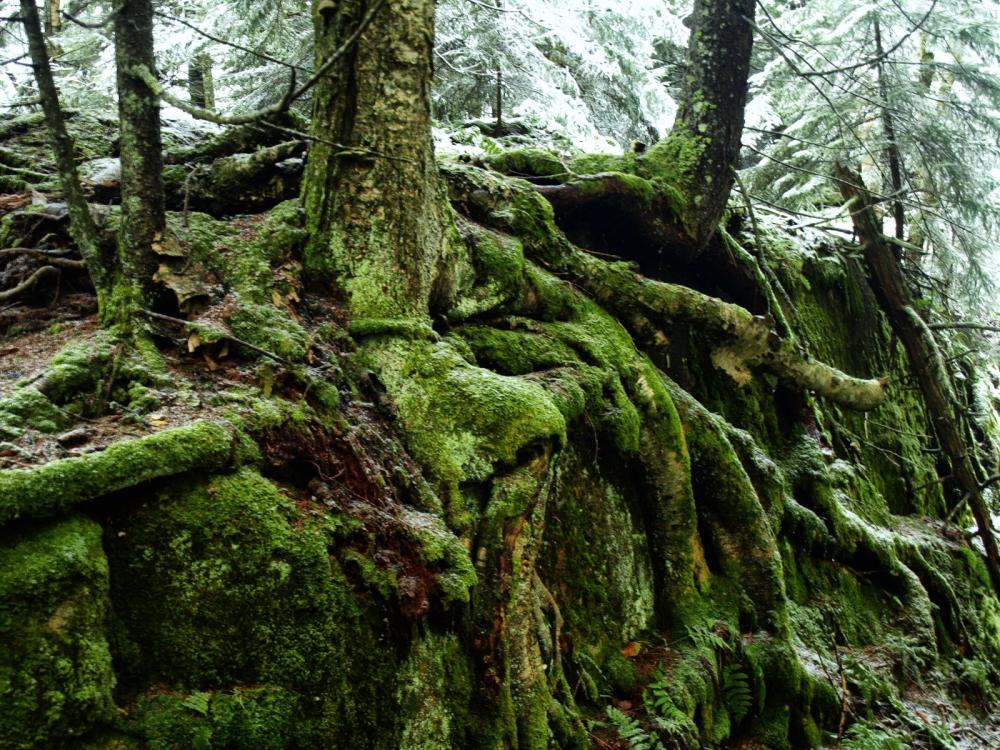 Within this draw we stood below tall rock ledges layered in a lush green moss with gnarly yellow birch roots reaching down to the mineral soil below. Suddenly, there it was, an obvious old trail with cut trees and logs marking its ancient course. It was obvious it had not been used in a very long time, maybe even decades, but it was there nonetheless. We tried following the path by locating limbed tree stems, which eventually led us to the site of the old hunting grounds. No building remained but the square footprint of a possible canvas structure was obvious. Trees were limbed 12 feet up to support the cloth structure and a decaying pile of firewood rested nearby. 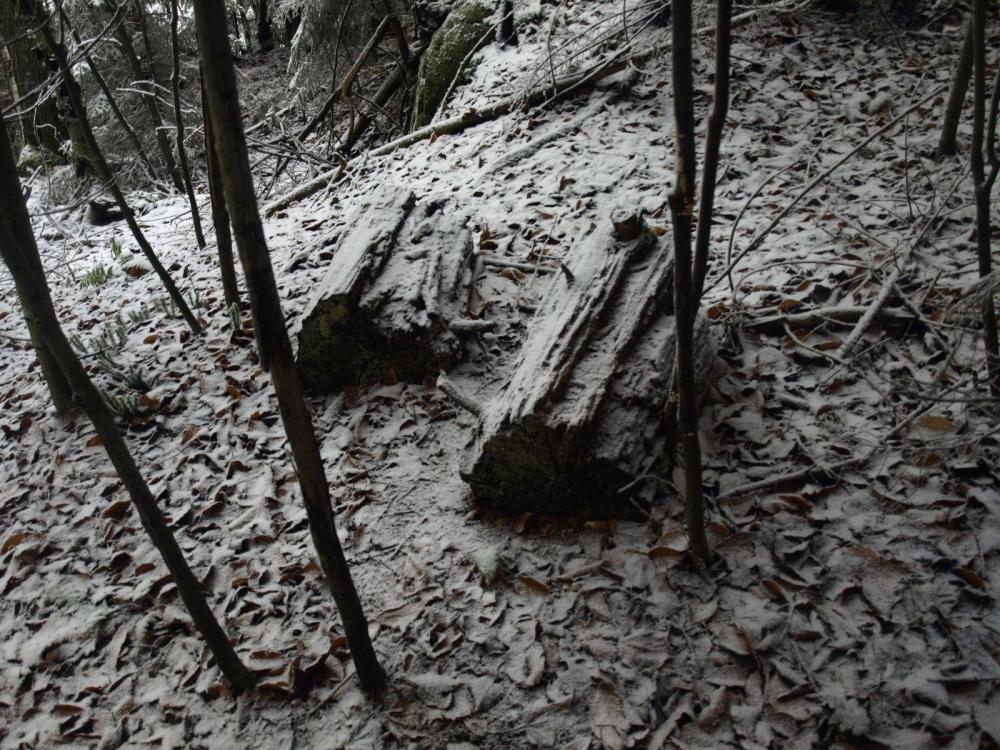 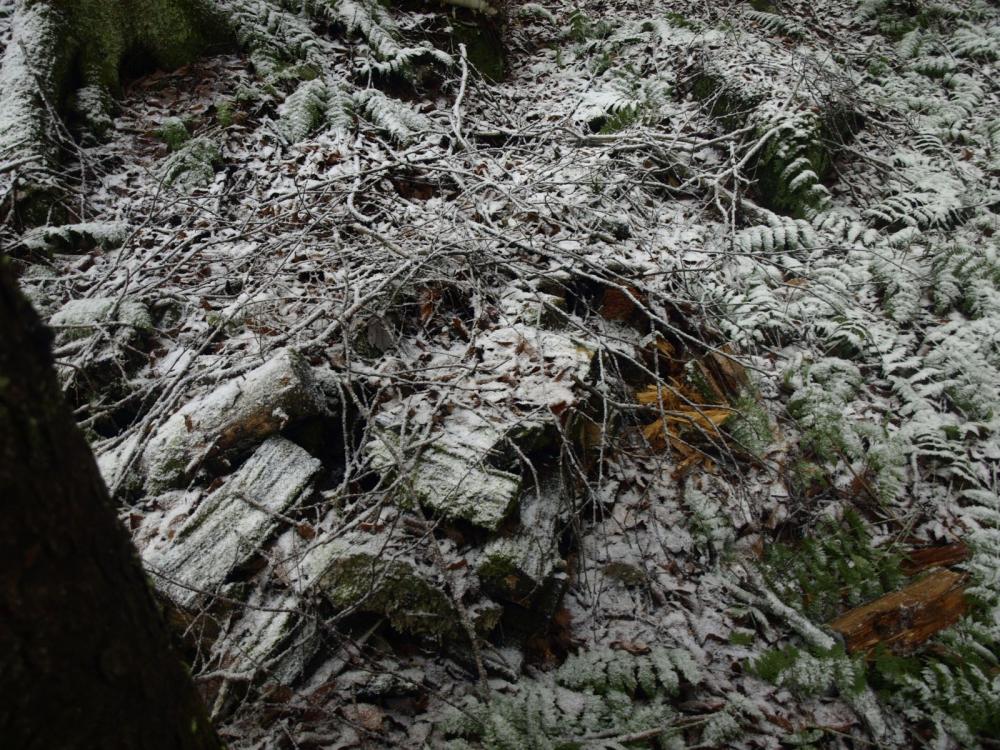 Our attempt to follow the trail back to the carriage road left us blind to its final location, and back in the open hardwoods it disappeared before us. From here we followed our track up, which was not all that far off course from where this trail, at one time, rested. We made quick work of the carriage road, not caring about the mud before us or the torrent of water running down the trail from the melting snow. We walked right through all of it. We arrived back at the car not too long after the 1 p.m. deadline, with just enough time for Mike to make it to the office and fall asleep behind the computer from the overdose of fresh air.

Looking for something to do after the hike? Grab a bite to eat in Lake Placid and go check out a show! 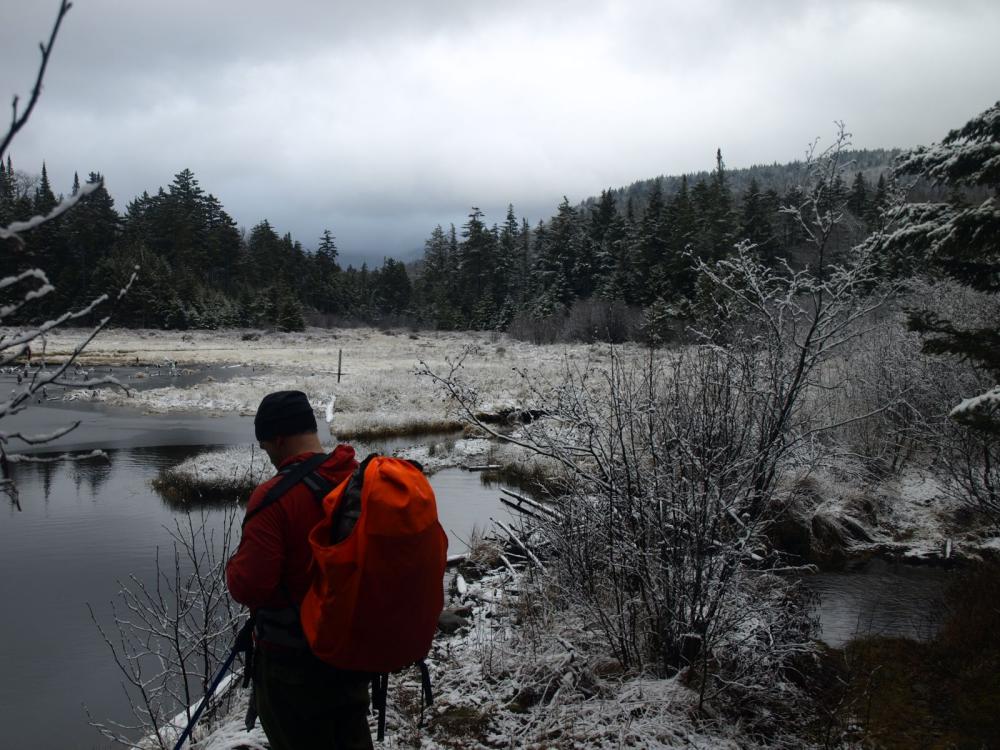