The calling of the 100-highest

The eastern ridge of Green Mountain has been one of wonder for me. I've heard feedback about the eastern ridge for quite some time and the comments are an equal mix of amazement and grief. After my recent dealings with the slopes of the mountain I would have to say it has a prime mixture of both. For the record, the good outweighs the ugly.

We started at the North trail for Giant Mountain and Owls Head Lookout trailhead. The day was turning out to be grand, with the sun peeking through the clouds and the temperature slightly warming up. Arriving at the Route 9N trailhead, just west of Elizabethtown, we were ready to hit the trail. Once on the foot trail we moderated our pace to our typical slow and steady. We can hike for hours and not stop for a break other than a quick drink at this pace; I would say we outgrew the fast-stop-fast-stop routine we were trapped in before.

We crossed the first bridge over the decent-sized drainage of Knoblock Mountain and then the second bridge over Slide Brook. Soon we started to climb Owls Head Lookout and meandered across a tributary of Slide Brook a few times on slippery rocks. Two-and-a-half miles later we were at the spur trail for the lookout. We opted to save it for later and jumped right onto Green's east ridge. 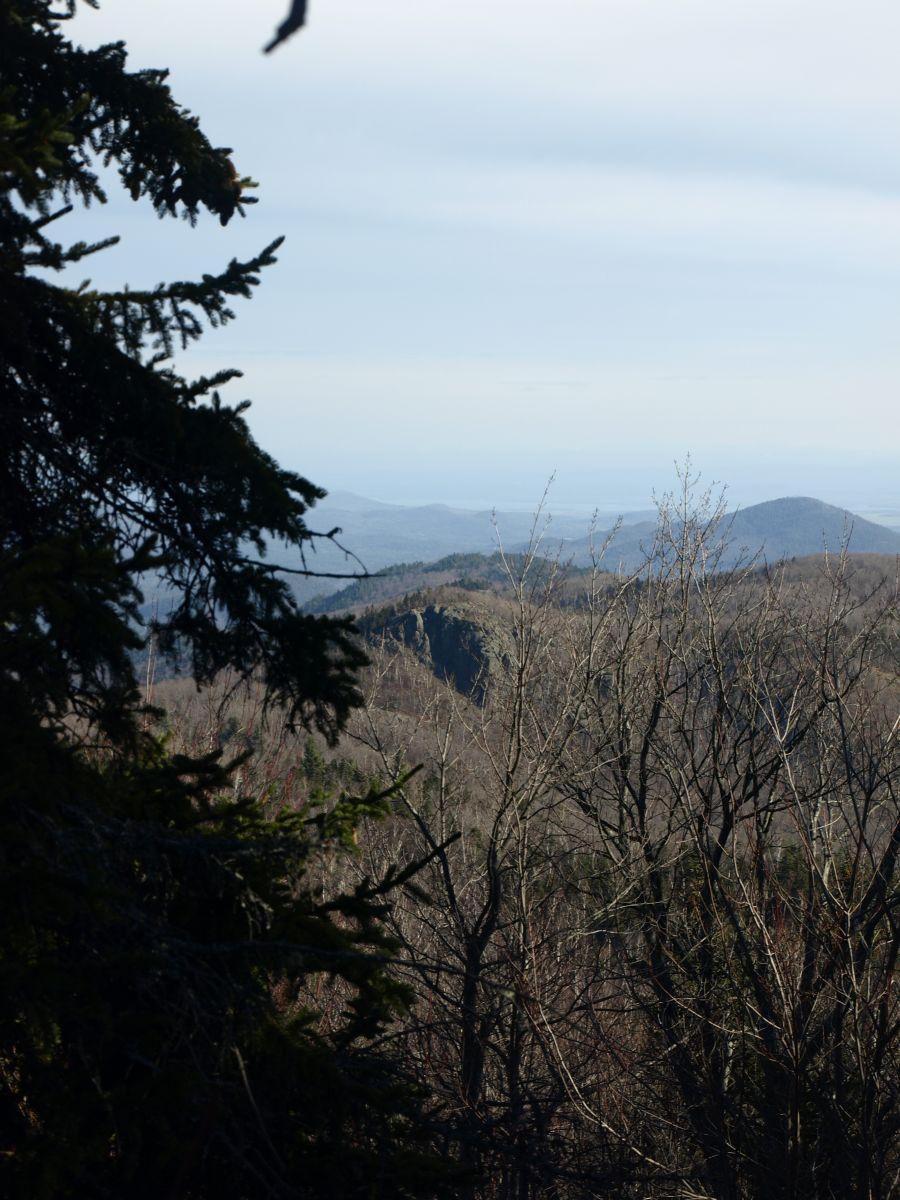 On the east ridge

To our right stood a tall boulder which would kick off our bushwhack adventure up this 100-highest peak. The forest was open as we passed by a fairly large vernal pool that had a layer of ice covering it. I am sure the frogs which live there are in full hibernation mode by now. We had views right off the bat as we followed the low gradient of the initial ridge, and looking back at the massive cliffs of Owls Head Lookout was a divine treat. With a slight bit of direction change we dropped over a small cliff and back onto the ridge. Through a semi-open forest we moved along swiftly. Again we stood atop a rocky view, and then another, and then another. The ridge were proving to be a wondrous place. 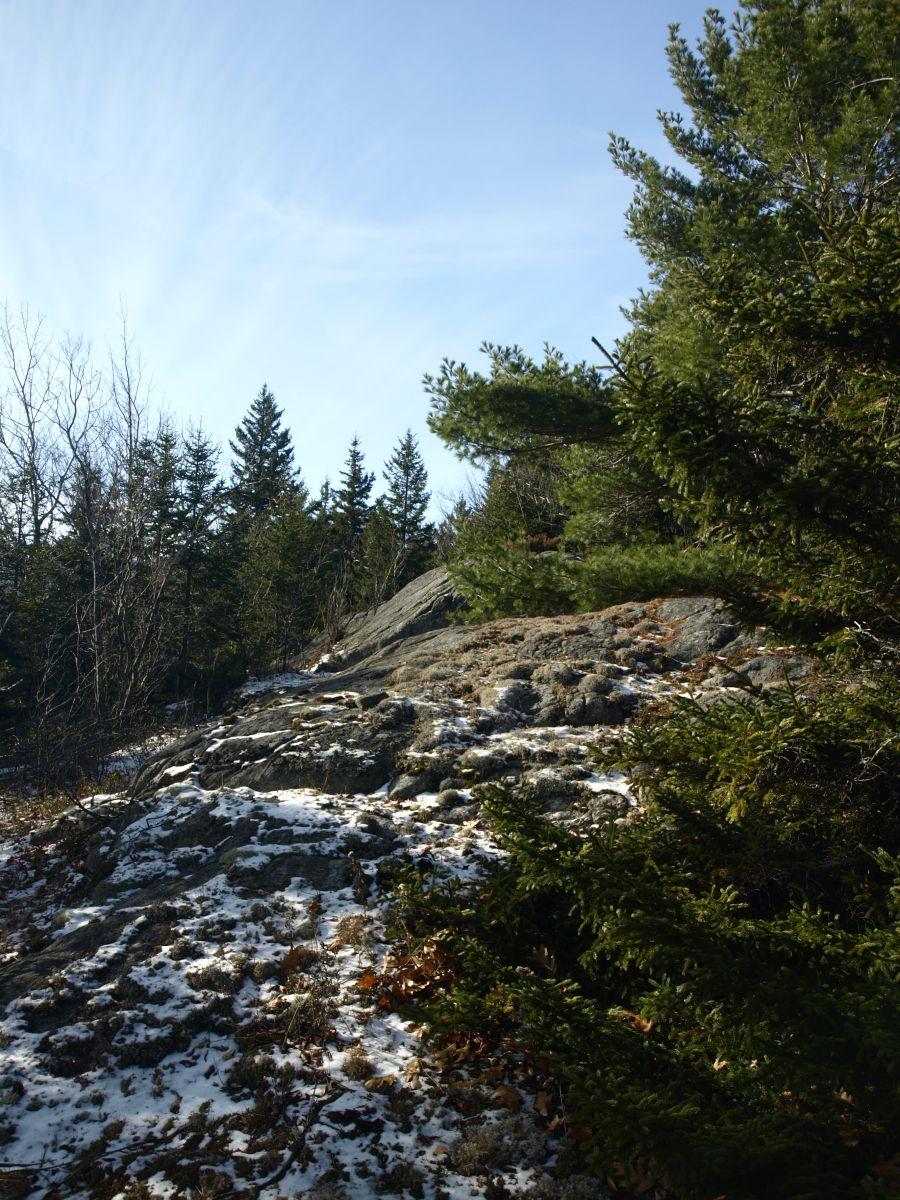 The ridge brought us from tree stand to rock to tree stand until we saw a massive square block of granite ahead of us. When I say massive I mean it’ was about the size of a house. It was hard to tell if it was a massive glacial erratic or part of the ridge. The rock was too steep and slippery to safely attempt to climb, so we backtracked and went around the backside of it. The rock sloped down to us, proving it was part of the ridge's bedrock. Atop the block were some fine views, and balanced boulders added to the ambiance of the vista. Green was 1.8 miles away as the crow flies, making us question if we'd have enough time before dusk settled in. All we really needed was to be back on a trail before dark, then we could just walk with head lamps. The worry made us hurry up some, but the views were just too impressive to ignore. After a dozen photos or so we descended into a deep draw via a sandy bank. 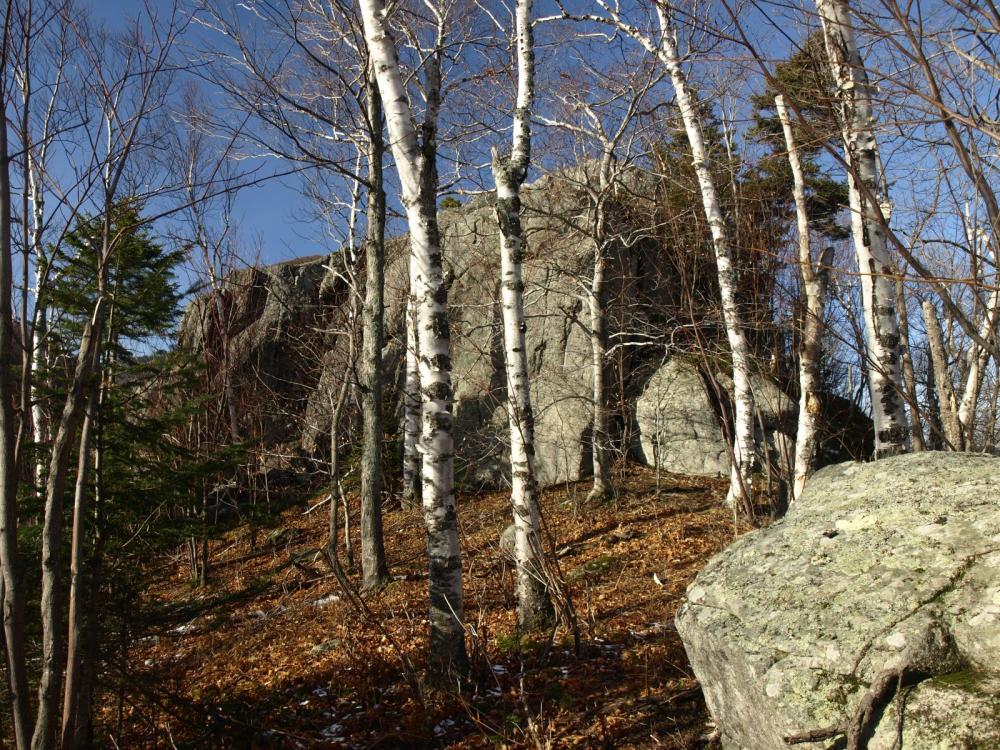 We entered the rocky valley at the base of some small cliffs that were too unstable and wet to attempt to climb, so we ended up walking up the valley to the top of the pass before we headed off again. The next bump along the ridge was a big one, over 3000 feet in elevation, but its structure was unique. At first it was comparable to a pile of boulders with some trees growing on them, which made it very hard to move through, and a quick pace was not an option. Eventually we had to get around the boulder, so we were forced to head south, where we could push our way steeply through the dense spruce. The spruce only resided in this one spot, and once we crested the boulder field we were once again back in open hardwoods. 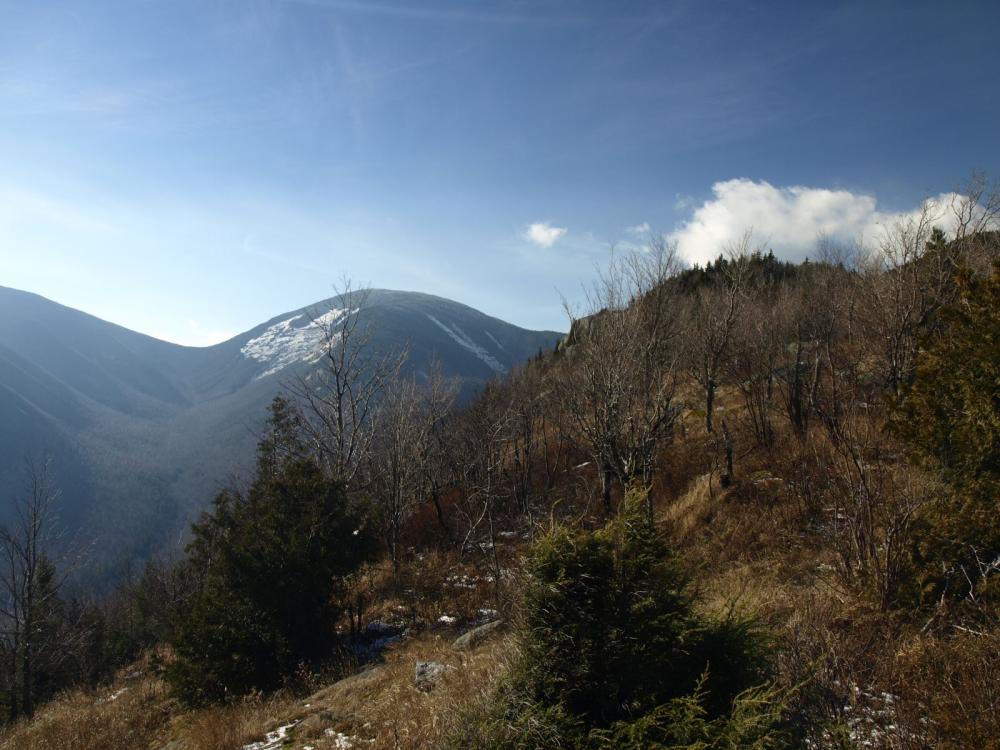 Our route was now very steep and steady, but we would crest this beast eventually. As we drew closer, the grade eased up and we stood atop with a wonderful view of Rocky Peak Ridge, Giant Mountain and the cirque between them.

Now on a flat ridge, we proceeded in awe of the continuous views and open terrain and Green's summit was getting closer. We took a lunch break atop a wide table of open rock, looking east over the open ridge and the uncluttered ridge above us to the west. More open rock called our names. After about 20 minutes of energy inducing snacks, we pushed on. The next rise along the ridge would prove to be one of many vistas into the valley of the High Peaks to the south, with Knoblock and Hurricane looking at us from the north. The forest started to get choked up with spruce and fir, but still wasn't hard to pass through. At 1-mile from the summit of Green we started to see more dense growth, so to combat this we dropped slightly to the north into a more open forest. 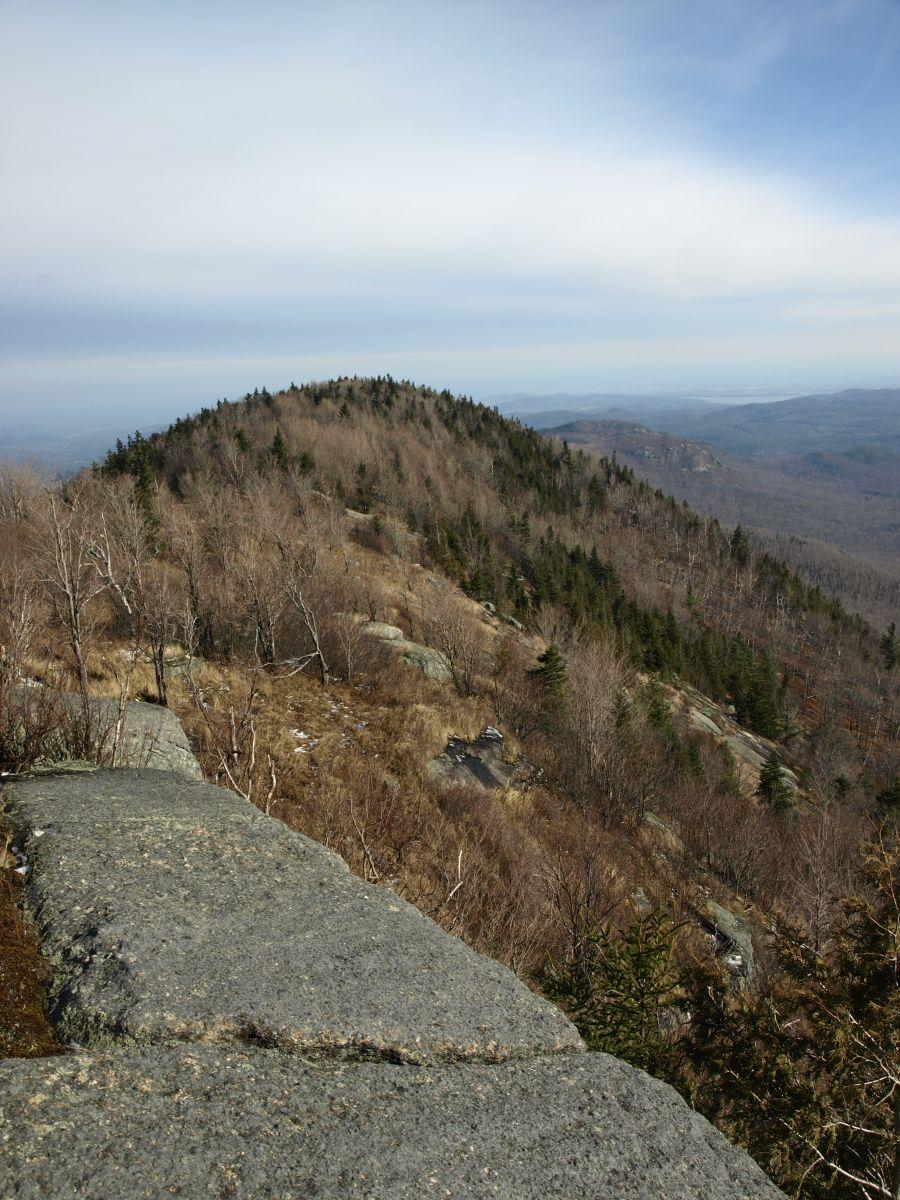 The wilderness closed in around us about three-quarters-of-a-mile from the summit. It was getting harder to find easy passage, but the strenuous climbing was just about done. The last half mile of the ridge was generally flat, but it was also ravaged by heavy winds and harsh winters. The downed trees were stacked like cordwood. It would be a battle of stepping over unstable, half rotted spruce and fir trees and pushing through dense new evergreen growth. At times both coexisted, bringing our pace to a crawl. 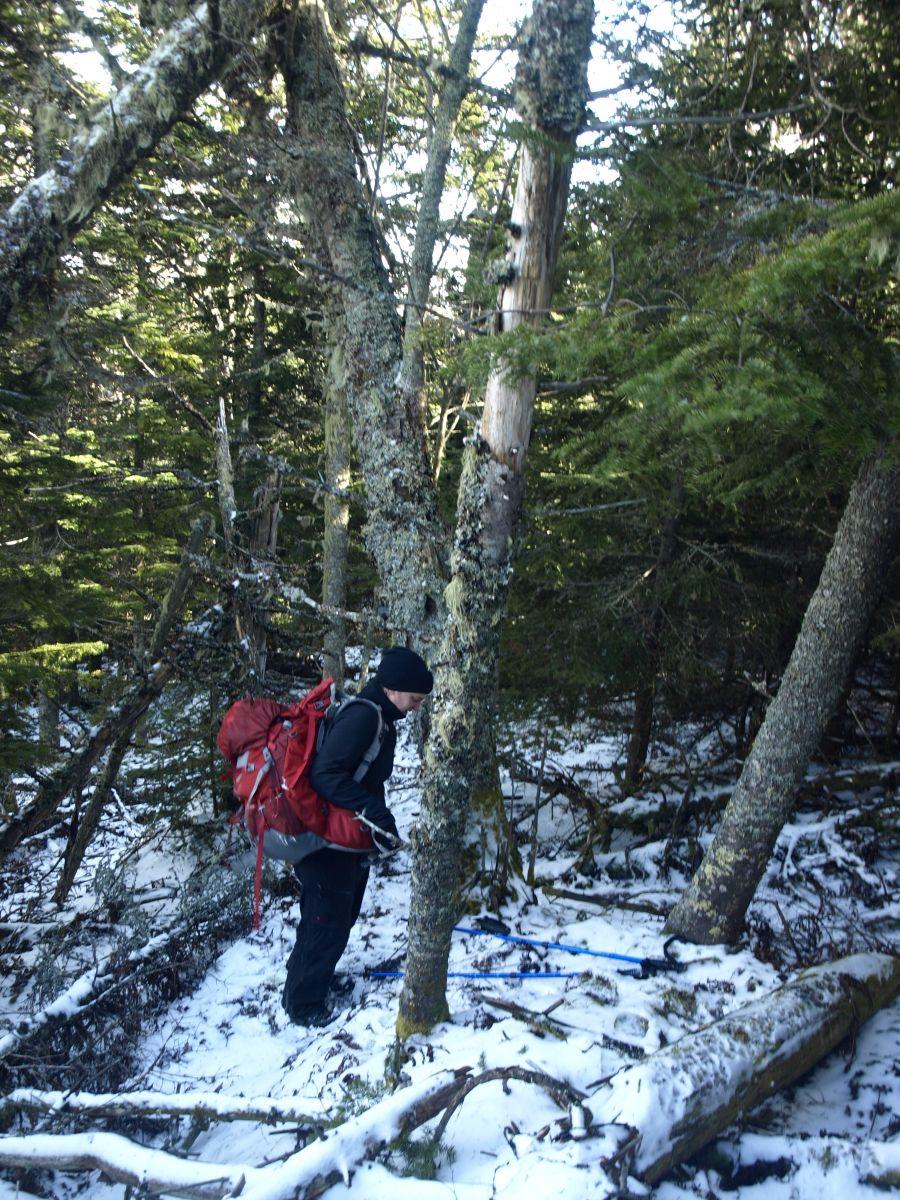 We summited at around 1:45 p.m. — plenty of time before sundown — and we'd probably have enough time to get back to the car before it was all said and done. We didn’t hang around too long on this wooded peak before starting our descent directly south to catch the North Trail near the Giant lean-to. It was only 0.5 miles to the trail, a much closer endeavor than revisiting the ridge. The forest was very tight off the summit but the views over the low-growing trees on Giant's slides took our minds off it.

Heading down to the Giant lean-to

We pushed our way through dense growth and over deadfall for the first 0.2 miles before we finally entered the open forest we so desperately wanted to see. The open paper birch gave us the inclination of a previous forest fire in the area, but our conversation was more set on gaining the trail again. We popped out onto the trail at around half-past-two in the afternoon, right near the spur trail to the Giant lean-to. From there it was a 5.6 mile hike back to the car. We put the trail behind us very quickly, not losing a step even on sore feet. The sun was getting closer to the top of Giant, and as we passed over High Bank the sun was behind the mountain dimming the light on the trail, surely to be dark before we reached the trailhead. 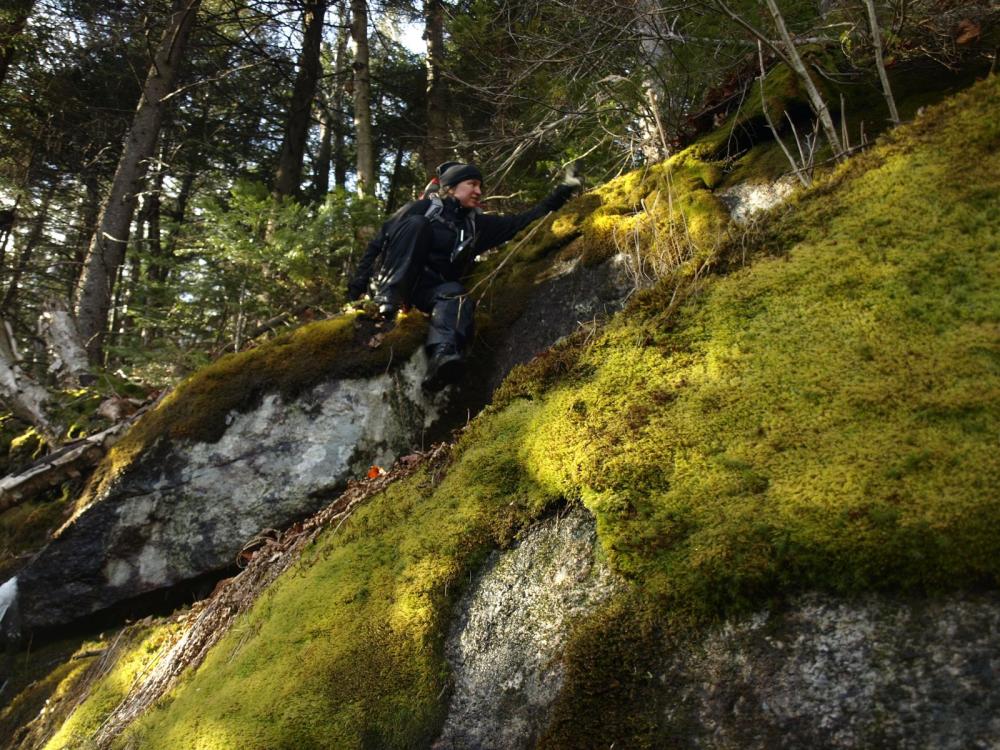 We then passed by a solo hiker and a small Jack Russell, heading to High Bank; no water or pack on his back we wondered if he even had a headlamp. He was a mile from High Bank and we knew we wouldn’t make it out before dark. We were sure he would have quite a horrible go of it without a light. Not seeming concerned he proceeded and we never saw him again. Hopefully he fared well. The leg-burning climb to reach the Owls Head Lookout spur was all the climbing we wanted to do for the day, so we opted out of visiting the lookout for sunset and just kept trucking on down the trail. 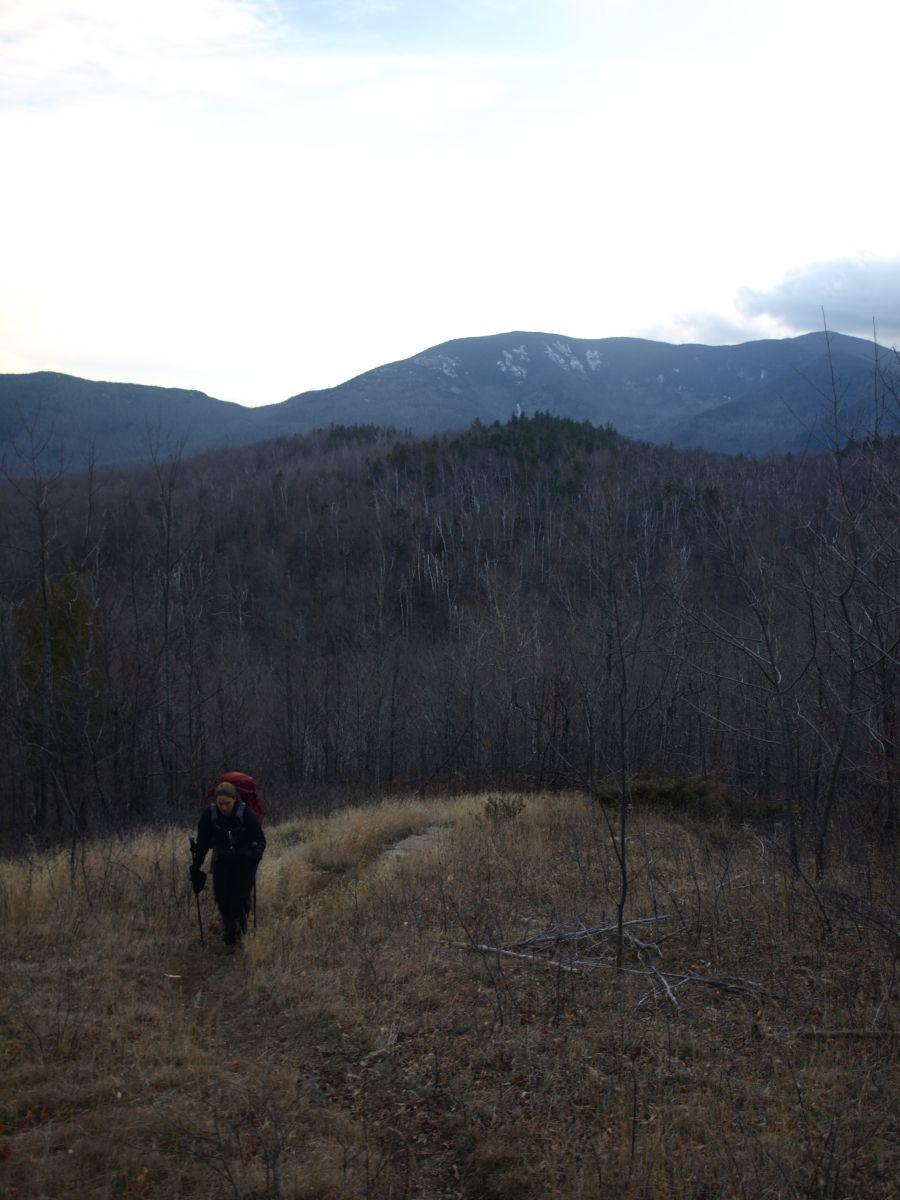 Our next stop was the Green Goddess for a snack before we hit the road back home. As a theme of the day, we had to rush to do that, too.  We made it just before they closed and nearly cleaned them out of the gluten-free goodies in the cooler. We were now enriched in our minds and bellies.