Ahhhhh, the memories of adventure, the thoughts of bitter cold, and a chill of blistering gale force winds... that’s what I think of when remember last year’s climb of the Lake Placid Slide on Whiteface Mountain. This slide, while not an easy approach at all, is becoming a much more sought after line for the summit. Winter is no different for those dedicated souls wishing to get out on a mountaineering adventure. This is a trip for any outdoor journal and a must do for any fully prepared and experienced winter mountaineering enthusiasts.

Starting from Route 86 at the Whiteface Mountain/Whiteface Landing Trailhead we began our journey to try something we only dreamed about on paper - a paper map actually. I had been eye-balling this slide for years as its seen from Route 86 in Lake Placid and finally the day has come. We had spent a bit of time hashing out different approaches, exit points, bushwhack options, gear, time we estimated it would take – you name it, we covered it, and then when we were ready - we covered it again. We were devising a plan to ski to the lean-to at the base of Whiteface Mountain, hike the trail a bit to a level point on the map, bushwhack over to the Lake Placid Slide, put on our crampons and get out the ice axe, climb to the summit, hike back down the trail to the lean-to, put our skis back on and ski back out to our car. That doesn’t sound too complicated, right? I know how you must feel; I’m tired from just writing about it. We weren’t even sure if this would work or not, was it feasible? Was there enough daylight? All of the maybes and unanswered questions, we were about to answer as the following morning neared. I got about two winks of sleep the night before, but as for Corenne - well, no issues there.  Five in the morning came much too early that day and breakfast set lightly in our bellies as we drove to the trailhead.

We put on our AT Skis, the Silvretta Bindings allowed us to ski using our mountaineering boots, so there was no need for extra gear. The snow was minimal along the old road. It wasn’t too difficult to ski, but an occasional rock did break the crust of the snow. Once we reached the state boundary and we were in the trees a bit more, the snow softened and the glide was a bit better. If you have ever been on this trail in summer, you know that there is heavy rubble in areas and some of that rubble is bigger than what a few inches of snow will cover, even with a good base. This made any downhill, even the smallest, resemble a mini slalom course. So, the majority of the ski approach to Whiteface Landing was typical for an early winter ski for the region.

From Whiteface Landing we would ski only for another mile to the Whiteface Brook Lean-to. This portion of the ski is along a foot-trail, not an old road, so it was much more interesting. The terrain was very flat, but narrow – not a bad combination, I might add. We did have a bit of a problem crossing the brook and a couple pieces of new dead-fall, but we simply removed the skis for a bit and replaced them on the opposite side, just to go around the corner and be at the lean-to. Once at the lean-to, we really couldn’t ski much further before the terrain was too steep for forward progress. Near the lean-to we went into the woods a bit and lashed our skis to a tree for safe keeping.

Turning our thoughts to mountaineering 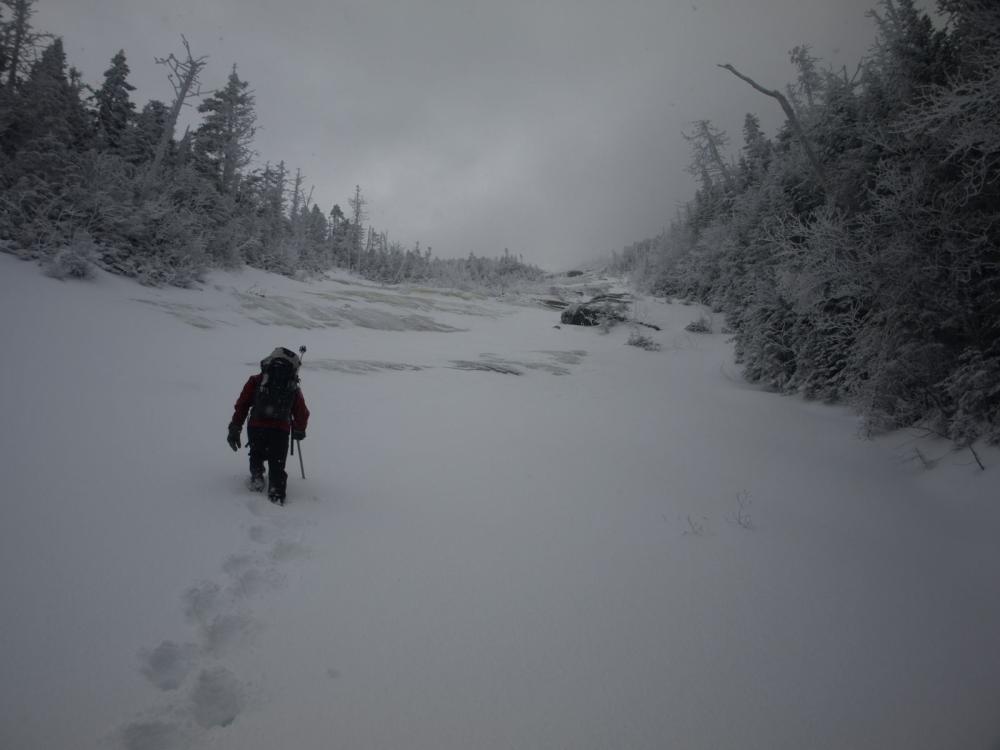 The snow had a very solid base from hikers over the past few weeks, so crampons worked nicely on the 2 to 3 inches of powder. The trail starts out a bit mellow, but wastes no time in letting us know who's boss. Roughly a mile past the lean-to there is a flat section where the trail begins to move away from the brook - this we predicted would be a good spot to start our bushwhack, but we were very unsure of the conditions at this point. We got about 200 feet into our short quarter-mile bushwhack before we decided to do the obvious: throw our packs to the ground, swear at the trees and curse our idea of trying this; then we put on our snowshoes. Fortunately for us, the forest stayed fairly open and only a couple times did we have to descend a bit to traverse an obstacle. The tightest knit trees were along the slides edge where they reached out to the sunlight. That was ok though, we could see the shimmer of the snow track that was the Whiteface Brook. We soon came to find out we had exited below the slide, but how far? It seemed that we were not the only ones loony enough to be there, a pine marten has just broke trail for us through what was remarkably about 8-inches of powder. Where had all this come from? Now, getting a bit exhausted, we had to wallow through much more powder. Breaking trail was a chore, so we took turns. Then just up ahead we gazed upon a rather large boulder blocking passage up the stream, shouldn’t be an issue we proclaimed. The wind had made a snow ramp up the left side, our lucky day. Not really, it was also powdery and had to have been nearly 4-feet deep as I made my way to the bottom of it, several times. We simply were pushing our way through a snow fence of a distance we had yet to determine. All in all, it was only about a distance of ten feet before we were on the other side of the boulder and not long beyond that we waded to the base of the slide, where, to our relief - and my precise mathematical measurements - it was 72% windswept to an icy base and 28% deep packed snow. We were now looking up into the clouds at a slope whose grade exceeded our every expectation. This was our stairway to heaven and every step only proved to be more spectacular than the last. 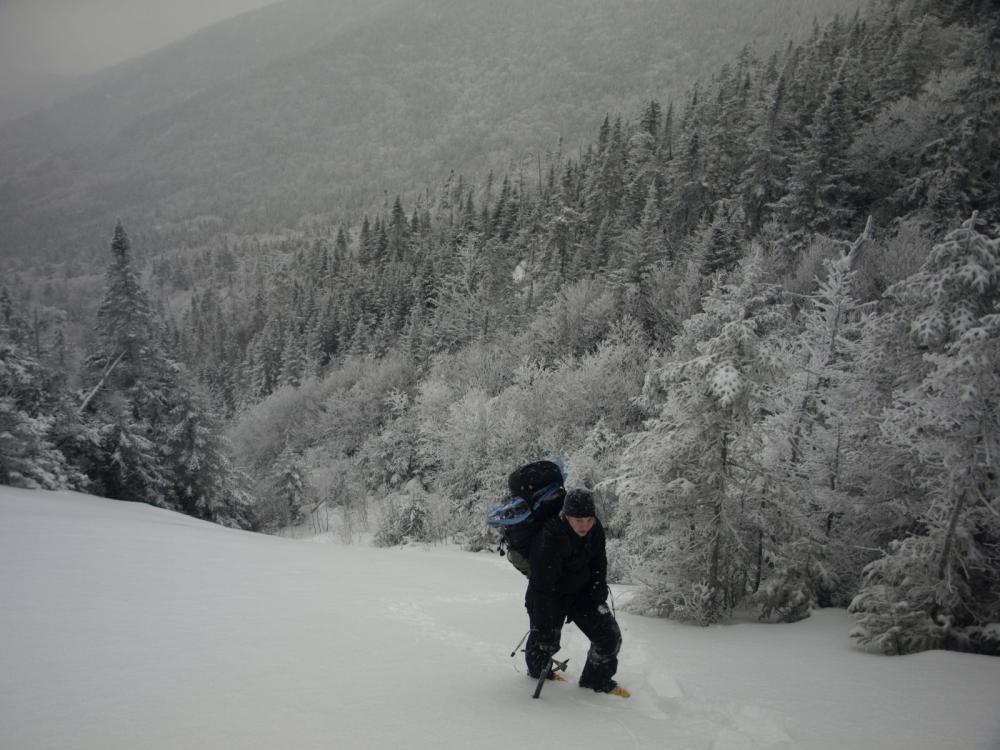 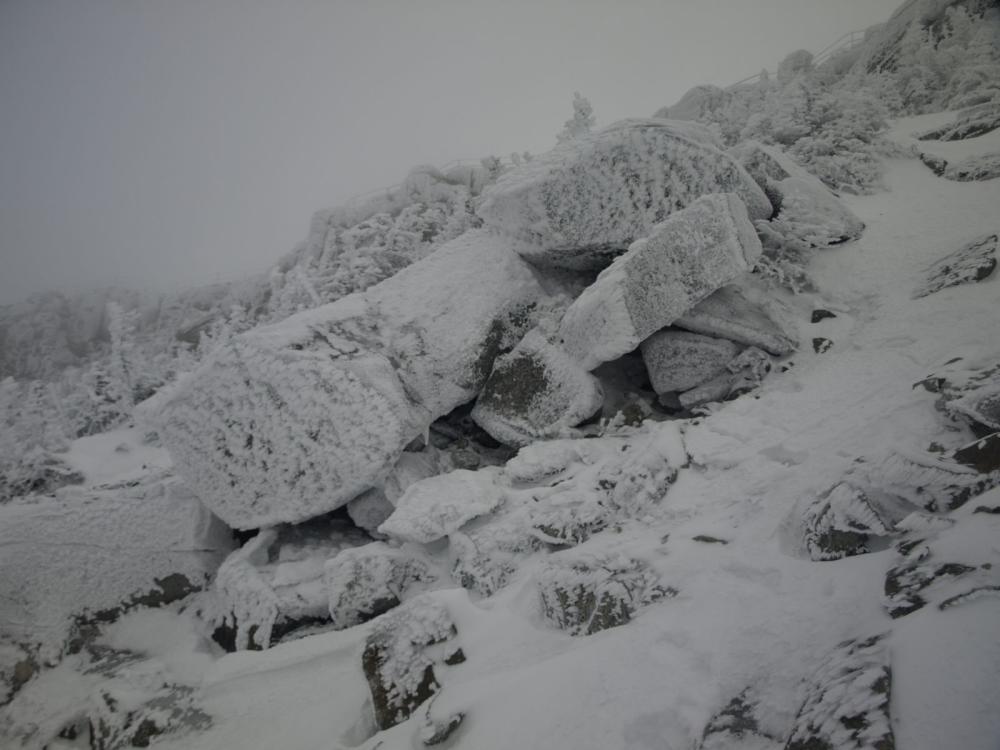 As we pushed on toward the summit we were pleased that we had full crampon traction and mountaineering axes. There were several small ice walls, yellow and orange from the minerals in the rock and soil, these needed to be navigated. Some were easier than others and in many cases we had a narrow patch of wind packed snow to trek on. Other cases we were not so lucky, we had to head right at the ice and use our best crampon and ice axe technique. Alas, we were above most of the trees and fully engulfed in the clouds. Gusts that exceeded 30-mph felt like 60 and we were at the point where balance was becoming key to a safe summit. Not long after that we could see the stairs that lead from the castle to the summit, we were getting very close. As we approached the stairs we had to hike parallel to them for a bit of time before we could “hop the fence.” The summit came easy from here. We hung around for a fraction of no time at all before the wind wore on us; we huddled behind the rocks and building on the lee side of the wind and then we descended hastily along the trail back to the landing. 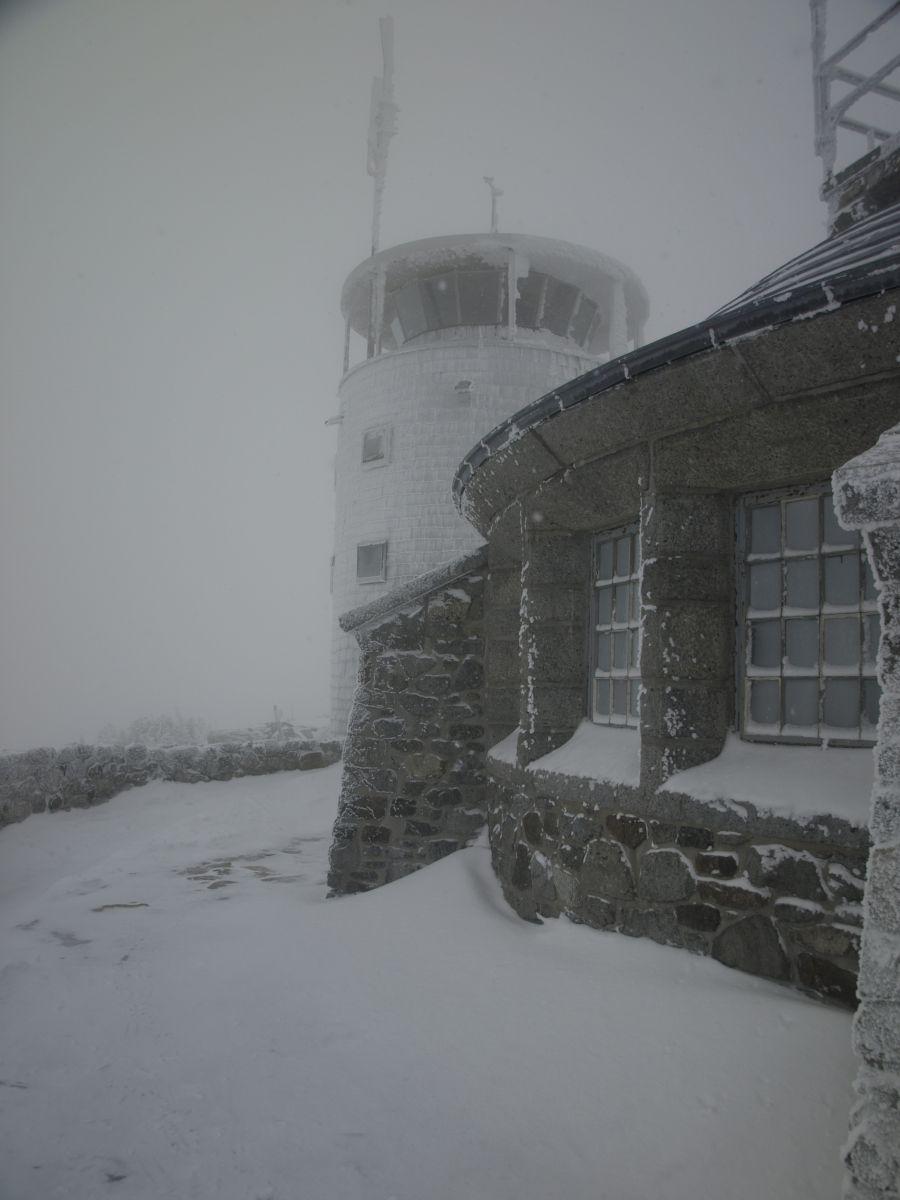 Our descent down was fast and furious. The butt sliding and glissading turned our rear-ends and snowshoes into skis and sleds. One step turned into roughly the distance of three or four. Stumbles landed us in feet of powder along the sides of the trail. Inches of snow compressed down the collar of our shirts, but we didn’t care, we would soon be at our real skis and gliding down the trail back to our car. We were very happy with our success of the day, even though we had very little energy left for dinner out – but we managed.

Interested in a climb of the Lake Plaid Slide or another slide in the High Peaks Region? See what our local guide services have to offer. Need a place to stay so you can get an early start as we did? Placid has the perfect soft pillow for your head and the perfect place to get dinner afterwards.