He was living in Saranac Lake when some neighbors returned from a trip to Alaska with a bunch of puppies. They decided to go back to Alaska, but the young dogs were not to join them —instead, they were left on peoples’ doorsteps, including A.J.’s father’s.

Fortunately, that was a good place for the puppy to land. She was taken in, named Tasha, and she eventually gave birth to seven puppies of her own.

Some of the lively animals pulling sleds across Mirror Lake today are part of Tasha’s line, most of them a robust mix of Siberian husky cross-bred with Samoyed. One dog, Lily, is the exception. She's a pure-bred Siberian husky. 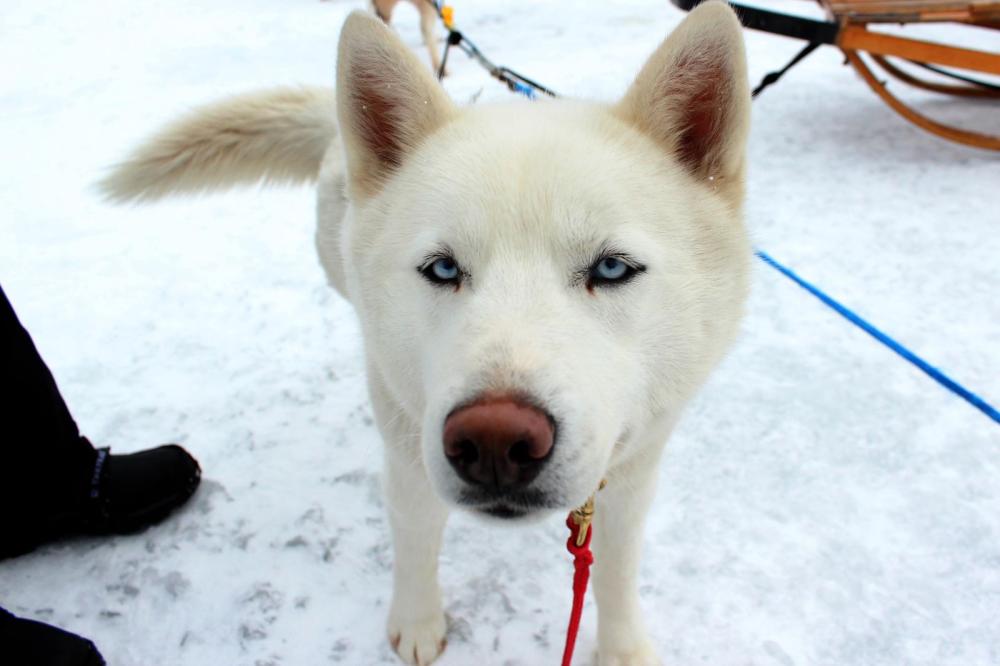 It's all about the dogs

A.J., who started giving rides about 18 years ago, explained that the dogs are natural sled pullers. They’re low to the ground, giving them a low center of gravity, and they can run 100 miles a day if given the chance.

They also have an incredible biological adaptation called countercurrent circulation, which enables them to endure temperatures of 80 degrees below zero. The system works so well the animals prefer winter — days over 45 degrees tend to wear them down.

“The countercurrent blood system means the hot blood going down to their toes passes by the cold blood going back, and that warms it back up, just like a bird,” A.J. explained. “The temperature of their blood is almost the same throughout their entire body." 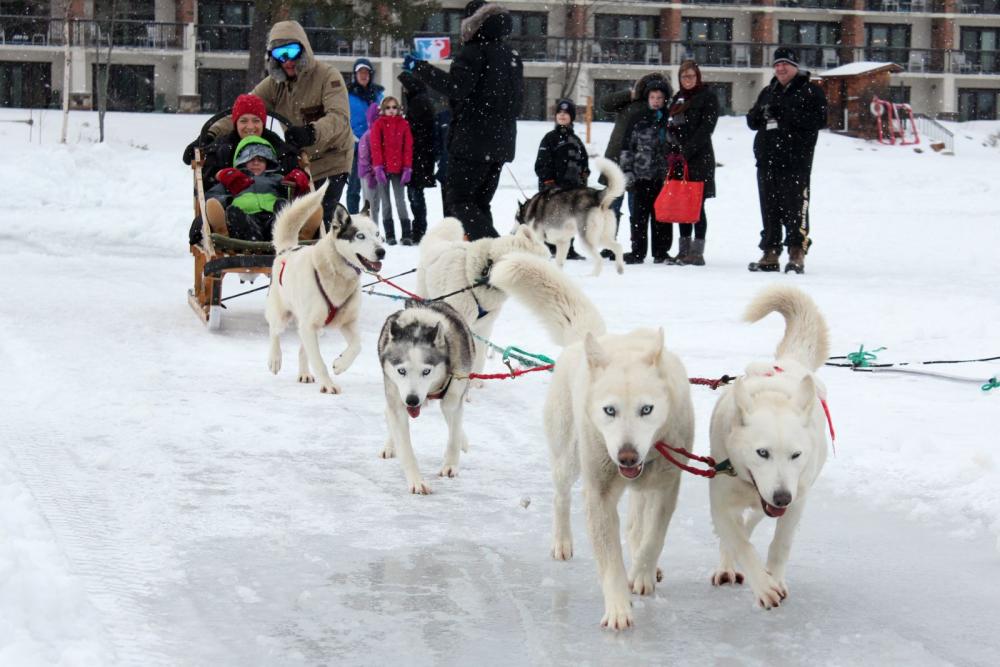 It’s no surprise that these dogs love to work. As a woman and a boy climbed onto the wooden sled, eagerly anticipating a ride, the dogs’ tails began wagging frantically. Their short break was over, and they were ready to get back to it.

“They're happy every day to come out here, I can promise you that,” A.J. said. “They love it. They're pretty upset if you leave them home.”

As he said that, one of the dogs began gently pulling on the sled as if to say, "Let's go already." 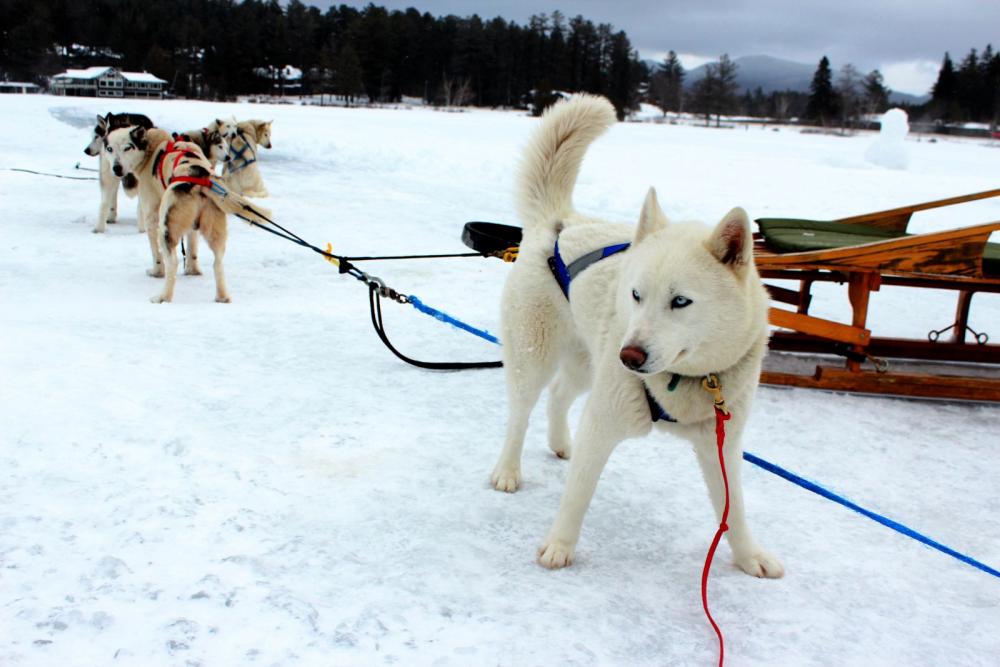 A short, gruff noise was all it took to get them moving, and the sled glided away as if it were weightless. To sustain such a feat the dogs eat a high-protein, high-fat diet, especially in the winter, when suet is added because it supplies a lot of fat.

A.J. says the cook at the Golden Arrow Lakeside Resort, which has a lake-side backdoor that opens near the loading area for sled rides, gives the dogs leftover scrambled eggs every morning. They love it.

The runs the Adirondack Wilderness Adventure dogs do are a far cry from the Iditarod, a notoriously demanding 1,000-plus mile race through the Alaskan wilderness, but they do incorporate some similar techniques.

Handling the dogs takes some understanding of dog-speak and dog moods. Like people, they have good days and bad days, and they don’t always get along with each other.

The minimum number of dogs depends on the conditions. Traveling over long distances, especially through varied terrain, requires more dogs. Since Mirror Lake is generally flat and icy, six dogs are enough. 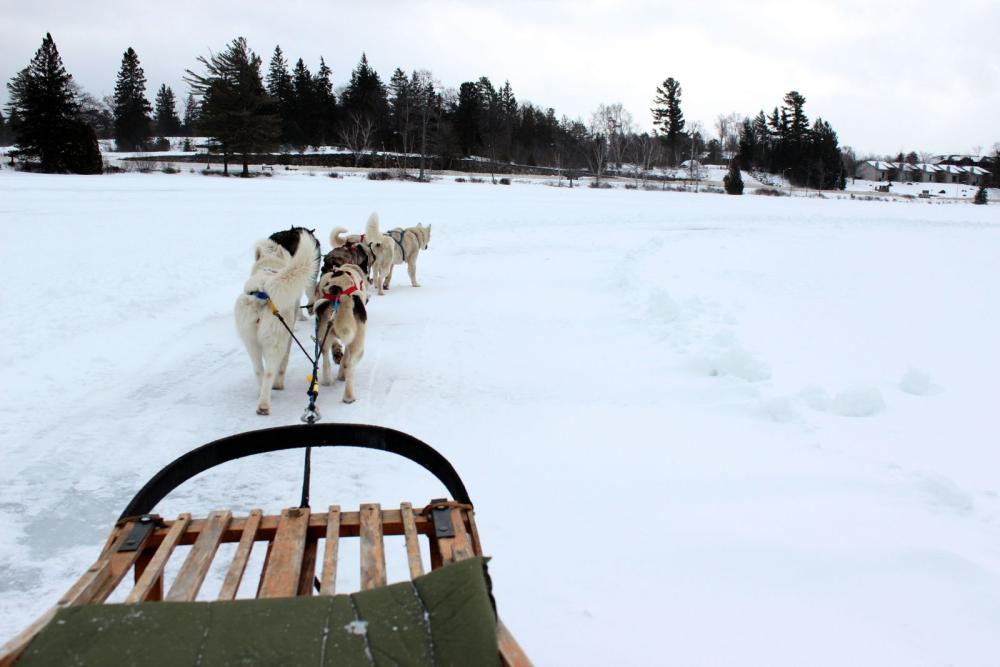 The most dominant dogs keep the pace and they go in the back, which they prefer because they want to keep their eyes on everybody. The pair in the middle are called “points,” and they serve as co-pilots.

"The guy in the front is the smartest dog,” A.J. said. “He’s usually dominant, but not too aggressive, so he's not going to turn around and pick any fights. He'll keep the whole team in line. You really rely on him.”

Being able to rely on the lead dogs is necessary because they’ll take the musher’s commands and use them to guide the rest of the team. Along with a whole set of whistles and noises, the basic commands are “gee” for turn right, “haw” for turn left, and “easy” for slow down. 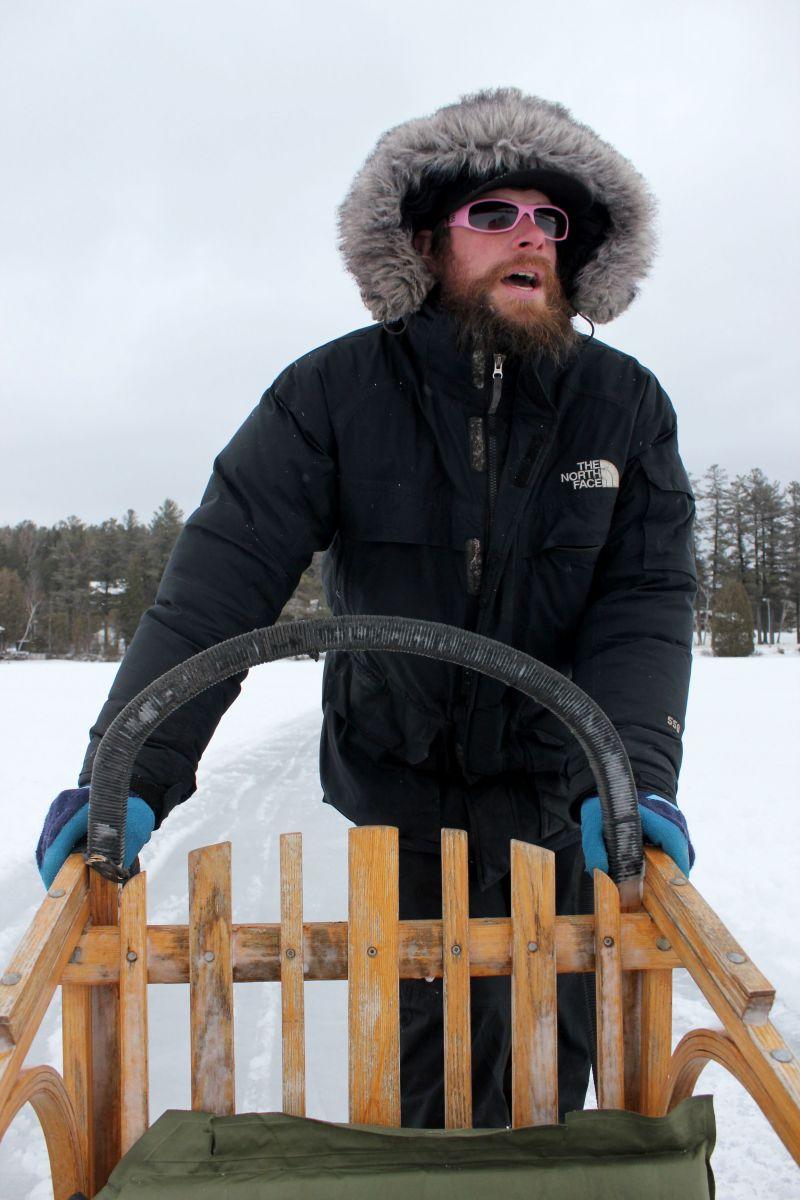 Amazingly, the commands aren’t shouted. A.J. calmly instructs the animals as they make their way around the track. From the comfort of the white-ash hewn sled surrounded by views of the nearby High Peaks, the dogs are oblivious. They’re happily content doing their job, running and pulling the sled across the frozen surface of Mirror Lake.

“Basically, I just keep them in line and make sure they're behaving themselves,” A.J. said. “Most of the time they're just cruising.”

Adirondack Wilderness Adventure rides cost $10 a person. You can find them on the ice behind the Golden Arrow Lakeside Resort from 10 a.m. to 4 p.m., Thursday through Sunday, and on holidays. A dog sled ride is the perfect way to cap off a Lake Placid adventure. Take a morning snowshoe, go ice skating at the Olympic Oval, then go for a ride before hitting up a restaurant for dinner.