Nobody has ever accused me of being patient.

Despite residing in the restorative, protected wilderness landscape of the Adirondacks, I’ve adapted easily to the fast-paced, social media-infused, 24/7 news cycle world in which we all live.

Given that default, anyone who can successfully coerce me into adopting a mode of quiet contemplation for more than two hours must really know what they're doing.

At least one such individual exists in the Adirondacks.

I met Helene Gibbens in late summer of 2016 when she first launched her new business, Adirondack Riverwalking. I have now participated in her program twice, and she continues to fine-tune the experience that she invented after a day of fly fishing with her partner, Bob Hudak.

As she says of that day with Bob, she loved everything about fly fishing — the solitude, and standing in the river surrounded by the sights and sounds of nature in the Adirondacks. She loved everything, that is, until she caught a fish.

She envisioned a way to recreate her pre-fish-catching experience, and to combine it with a little bit of science and a lot of mindfulness, and Riverwalking was born.

Let’s be clear: the Riverwalking experience is not exercise. There is nothing aerobic about it at all. In fact, it is quite the opposite. I’m not a doctor, but I think that as a direct result of this program, my heart rate and blood pressure were actually significantly lower than usual for the rest of the day, and maybe for the rest of the week!

Here’s how the program works. Upon arrival at the meeting place (undisclosed until you book your trip), we sauntered into a magical field with jaw-dropping views of the Adirondack High Peaks. Neatly laid out on the ground there were sets of waders and boots that appeared as if they were left behind when their inhabitants were beamed up to the U.S.S. Enterprise. In reality, they were selected specifically for each of the participants based on information we provided about our height, weight, and shoe size. 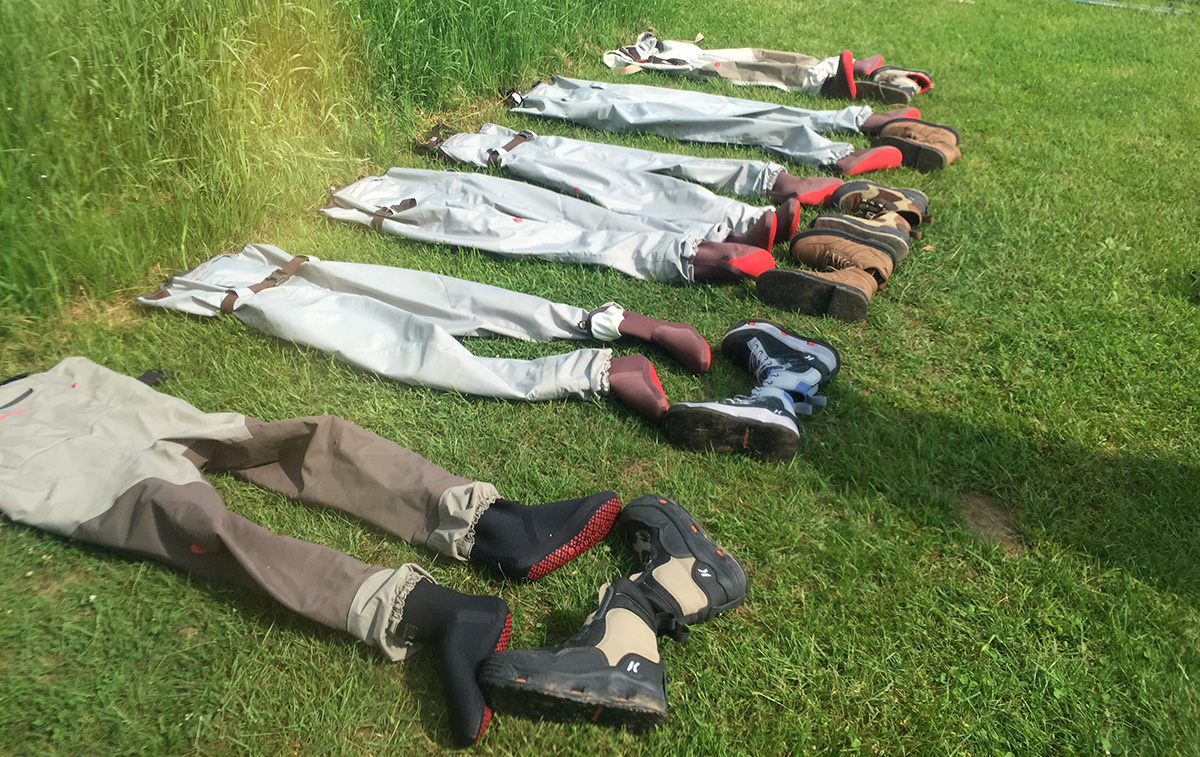 We donned our awesome waders, tightened the belt to prevent a potential breach of excessive water should we wade too deep, and then put the special boots on over the the waders, which fit like footy pajamas you wore as a kid. The boots have special felt-like soles to mitigate slipping while walking on the rocky river bottom.

We then met under a small canopy (it was very sunny out) to begin. That was the first test of my attention span.

Helene has been teaching yoga, meditation, and wellness for over 20 years and is also a provisionally certified forest therapy guide. To set the mood prior to entering the river, she leads us in a brief mindfulness exercise to get us to “open up our senses” in what I think of as a circle of trust.

This, I’ll admit, was likely the most challenging part of the day for me; switching my multi-tasking brain to the “off” position, or more accurately, to the “mindful” position. But the combination of the physical setting and Helene’s soothing manner and professional guidance truly transported us to a state of acute sensory consciousness that perfectly prepared us for actual immersion in the water.

We’ve all gone swimming, and experienced the feeling of walking into increasingly deep water, such as at the beach or pool. But there’s something about doing so at this heightened level of awareness, with waders on, that is really special.

We slowly walk into the water, each of us armed with a staff to aid in balance. The sensation of the water pressing in on the waders physically underscores the fact that we are literally immersed in the element of water, and a reminder of the power of nature as we eventually move into deeper and stronger current.

While walking in the river, Helene leads us through several exercises via a series of invitations, directing our attention to the surface, the consistency and movement of the water, the rocks on the bottom, and the sounds and smells that surround us.

The walk includes a portion in which we wade easily downstream with the current, and ultimately into deeper water. For this, we partner up and hold hands with another river walker for backup support (in case we stumble). The therapeutic pressure on our waders rises above our belts as we navigate to the depth we are comfortable exploring.

Along the way, Helene points out what looks like sticks attached to a submerged log. She then extracted a nearby rock from the bottom of the river and sure enough, those sticks were attached to it, too. They weren’t sticks, but rather bugs that have adapted to look like sticks. 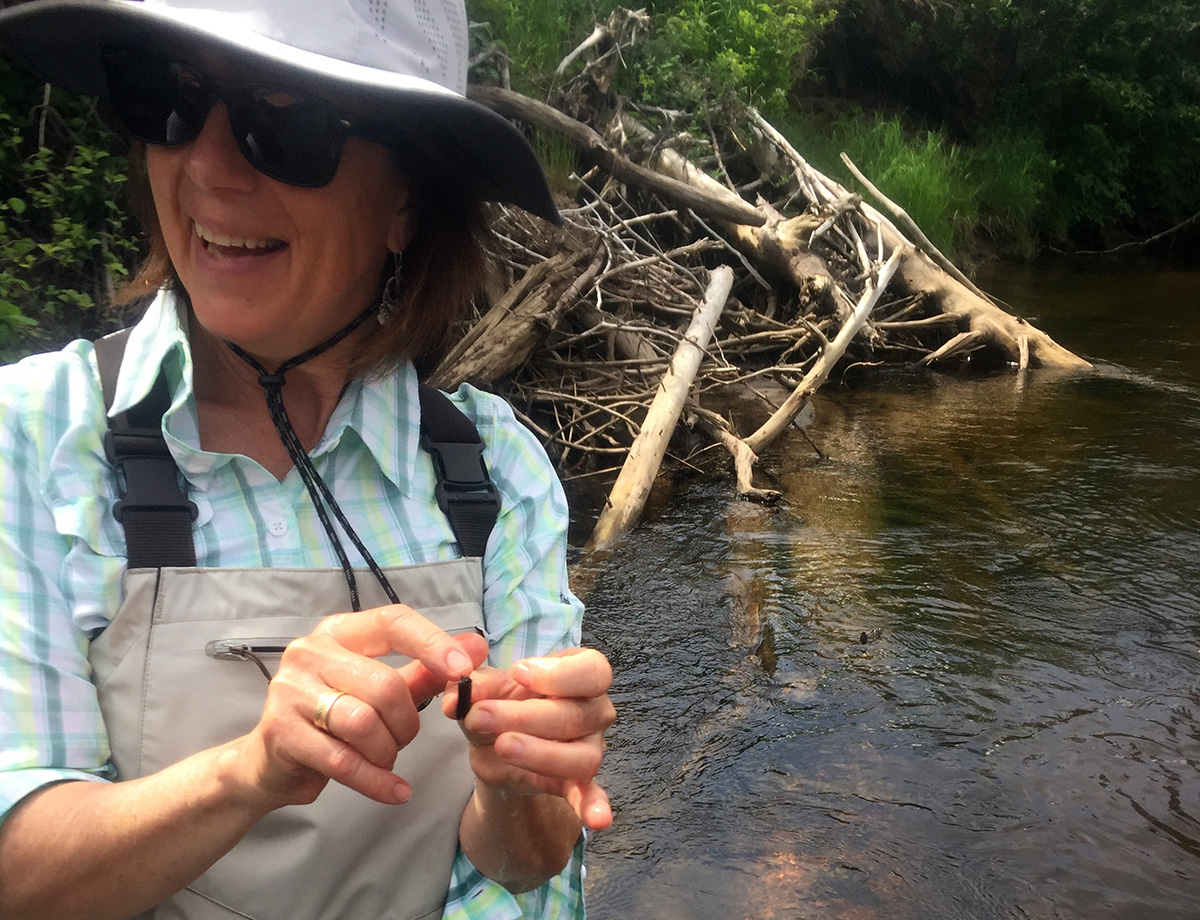 This is one of the “science” parts of the day, highlighting the abundant life that is part of the ecosystem of the river itself. At one point, Helene lightly churns up the river bed as two of our river walkers capture the churned materials downstream on a screen with two handles. We then take the screen ashore to examine what lies beneath - which in this experiment included caddis and dragonflies in different phases of maturity, and other bugs that fly fishermen try to emulate with their flies to entice fish to bite. It’s fascinating to visually comprehend the vast amount of life that the river hosts. 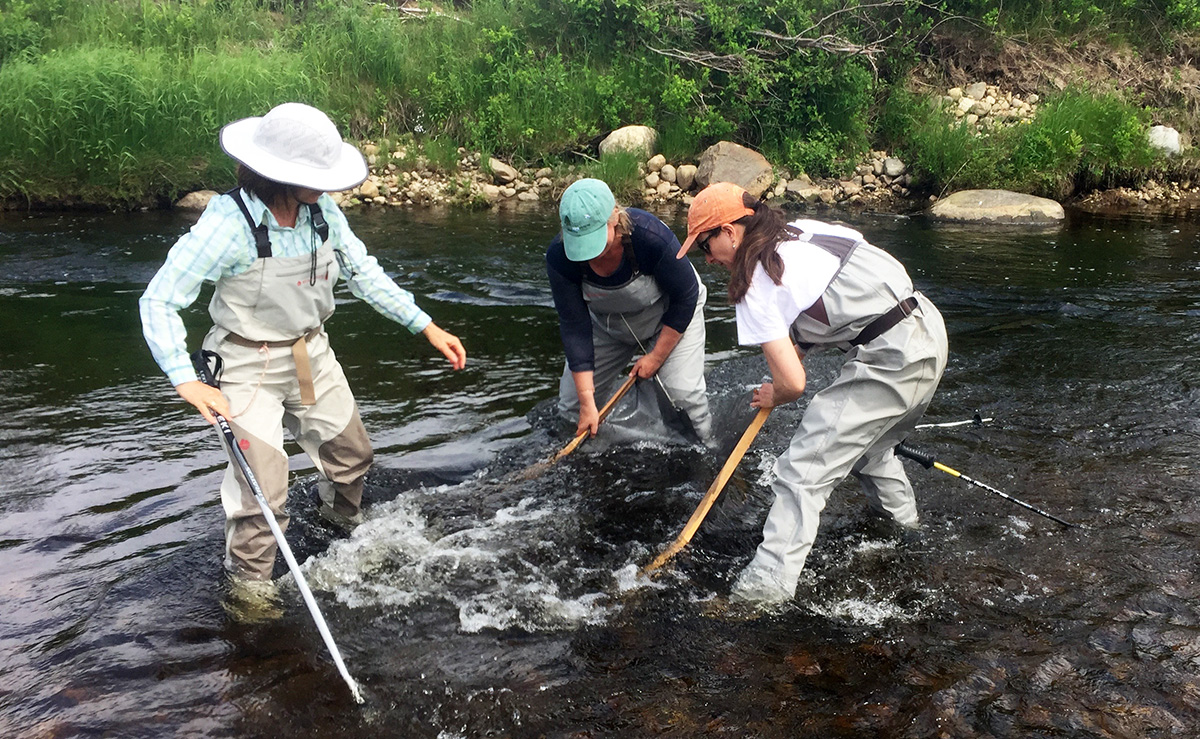 During the reverse trip against the current, I felt slightly braver and ventured a bit deeper into the water where the current was stronger. The sensation of walking upstream was awesome, and somewhat therapeutic in itself, as if I was a superhero fighting off any negativity with each step. 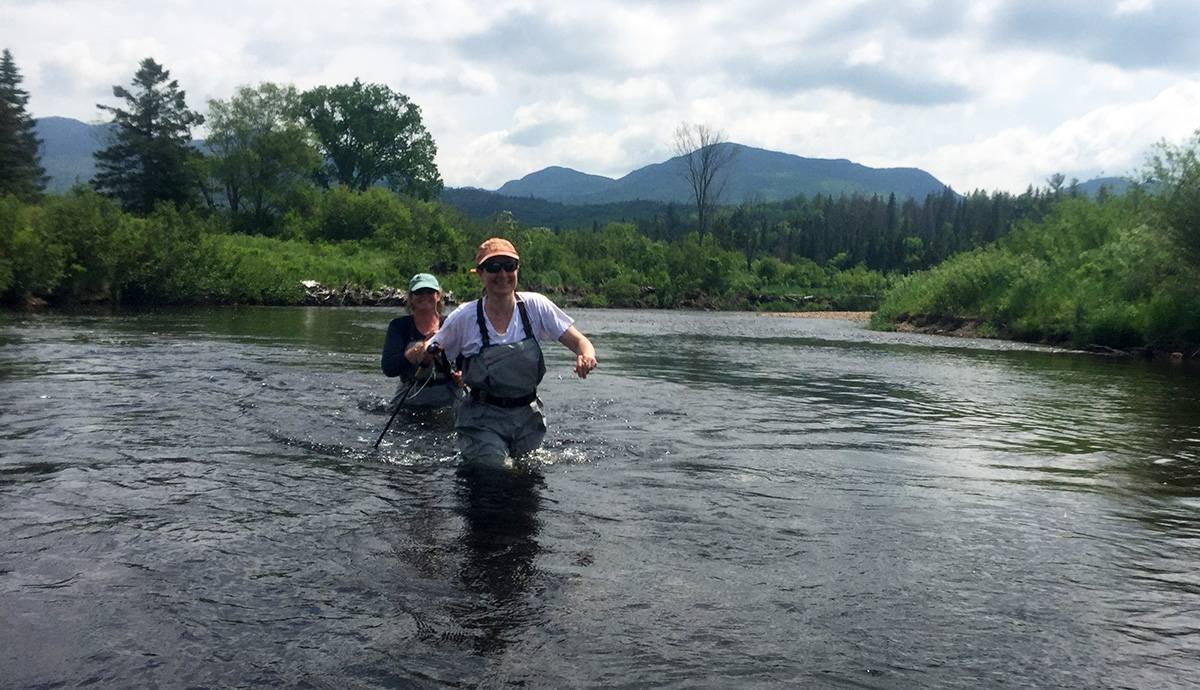 As we approached the area where we had begun, Helene invited us to take a long break to sit anywhere we liked for a period of what I affectionately call “forced contemplation.” Affectionately, because my first response to the idea was reluctance based on my admitted lack of patience, but I ultimately found the practice quite beneficial. I embraced her suggestion to “be open to slowing down,” and sat on a rock on the side of the river with my feet floating in front of me, noticing everything around me and thinking of nothing else. I was listening to the birds, watching dragonflies swoop, feeling my weightless legs in the water; I was completely relaxed.

The adventure wrapped up with us all circling back up under the canopy in the magical field where we shared what we had learned, and some tea made with balsam and clover that Helene had foraged while we were mindfully sitting. A perfect resolution to our immersive day. 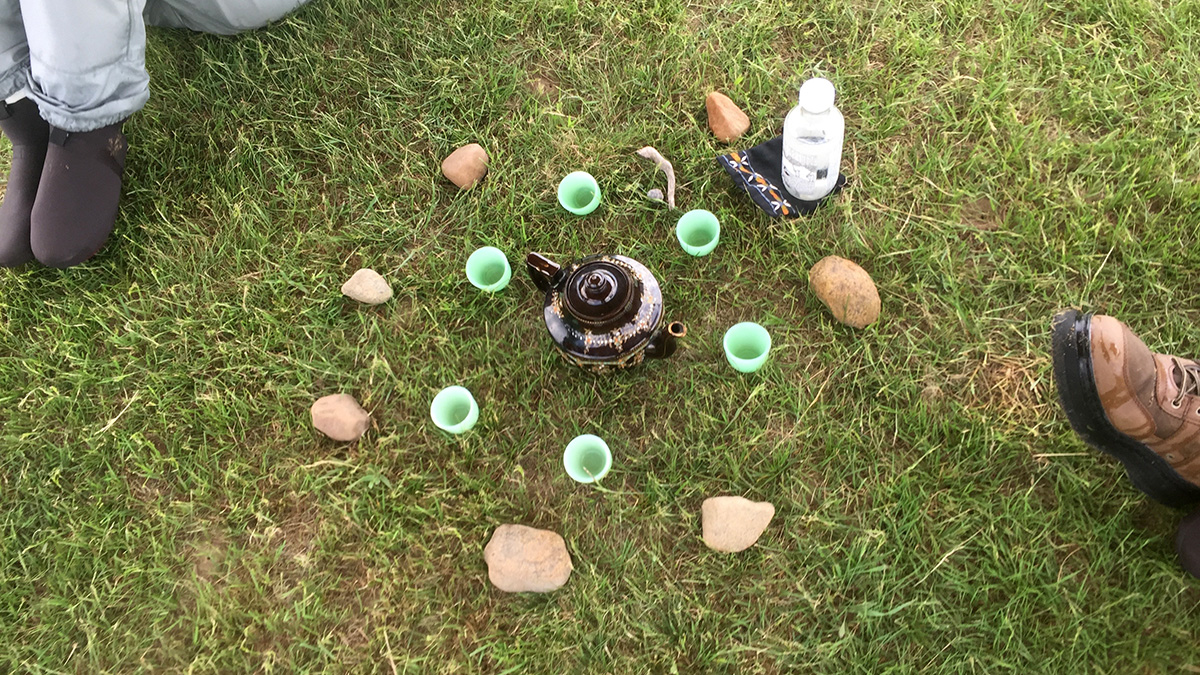 Show me the ropes

I live in the Adirondack woods, and can conjure a certain level of mindfulness while hiking or trail running. But just as you would hire a licensed guide for hiking, whitewater kayaking, rock climbing, fishing, and hunting, there’s a distinct benefit to placing yourself in the hands of an expert in their particular discipline.

A fishing guide might take you to unknown trout holes, a hiking guide will ensure you’re adequately prepared and achieve your goals, and a rock climbing guide will literally show you the ropes.

Turns out, an Adirondack Riverwalking guide can do what I thought impossible: lead me to water and make me not think. 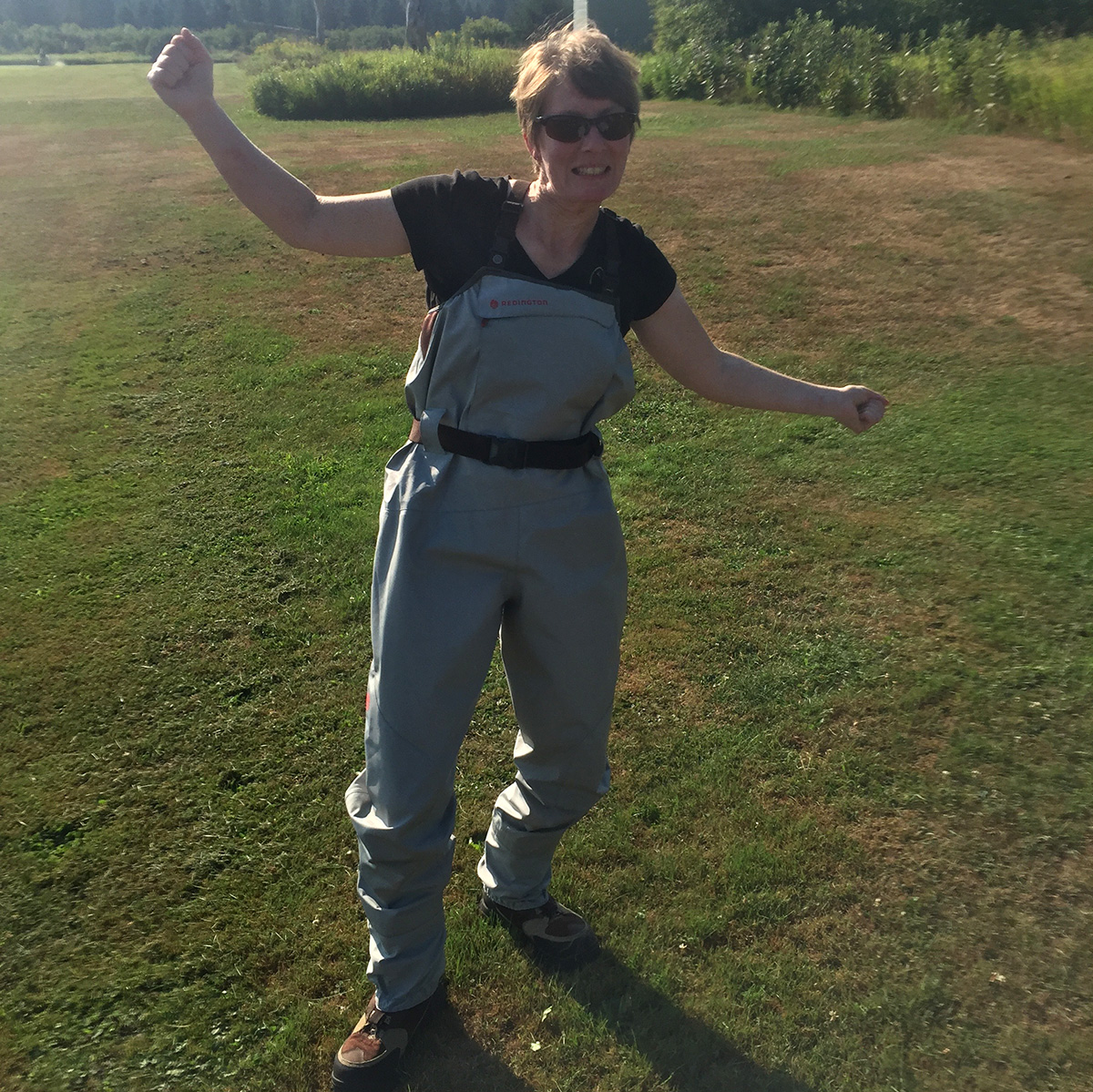 Kids are for the birds

A different kind of bar

To start a fire