I spend a lot of time hiking in the Adirondacks, but I'd never seen the backcountry at 40 miles per hour until last week.

My first time riding a snowmobile was more than 20 years ago, and I think I've only been on one once since then. The sleds of the 1990s were loud, bulky, terrifying machines that seemed as apt to overturn and crush their riders as to providing high-speed fun. I remember clinging to the person who was driving the cumbersome beast as she maneuvered the thing down narrow forest corridors, over dips and around sharp bends. My sense of adventure loved it; my sense of perseverance disagreed.

I'll try anything twice, so I called Jim McCulley, the president of the Lake Placid Snowmobile Club, and asked him to take me out on a ride. Jim was happy to oblige, and he even countered with a better offer: I could borrow his wife's sled and drive myself.

The original plan was to ride in the Lake Placid Region, but Jim explained there simply wasn't enough snow to fully cover the railroad tracks that go from the Olympic Village to Saranac Lake. The rail corridor is a direct line between the two villages, but the snow has to be pretty deep to make the journey safe and enjoyable for snowmobilers. Unless we wanted a jarring, potentially dangerous ride over exposed rail ties, we'd have to go elsewhere.

My dreams of cruising to Saranac Lake were quashed, but that turned out to be OK. Lake Placid is a great home base for Adirondack activities, and all it took was a scenic, 20-minute drive to arrive at our destination.

Jim gave me directions to a spot near the Shamrock Bar and Grill in Gabriels. Just head toward Paul Smiths along state Route 86 in Saranac Lake and take a right onto Split Rock Road. At the T-intersection, turn right onto county Route 55. Stop where an old rail corridor intersects the road, about a mile from the turn. There's room to park on both sides of the road.

Jim introduced me to my chariot, a sleek-looking contraption with a windshield, headlights and heated hand grips. It bore little resemblance to the clunky snow-pedo I clung to in my teenage years. I mounted the thing and eased on the throttle, which caused the sled to lurch forward with a stunted, deep-throated rumble. Touchy. It seemed my little metal dragon was eager to move, and so was I. Following Jim's lead, we got on with it. 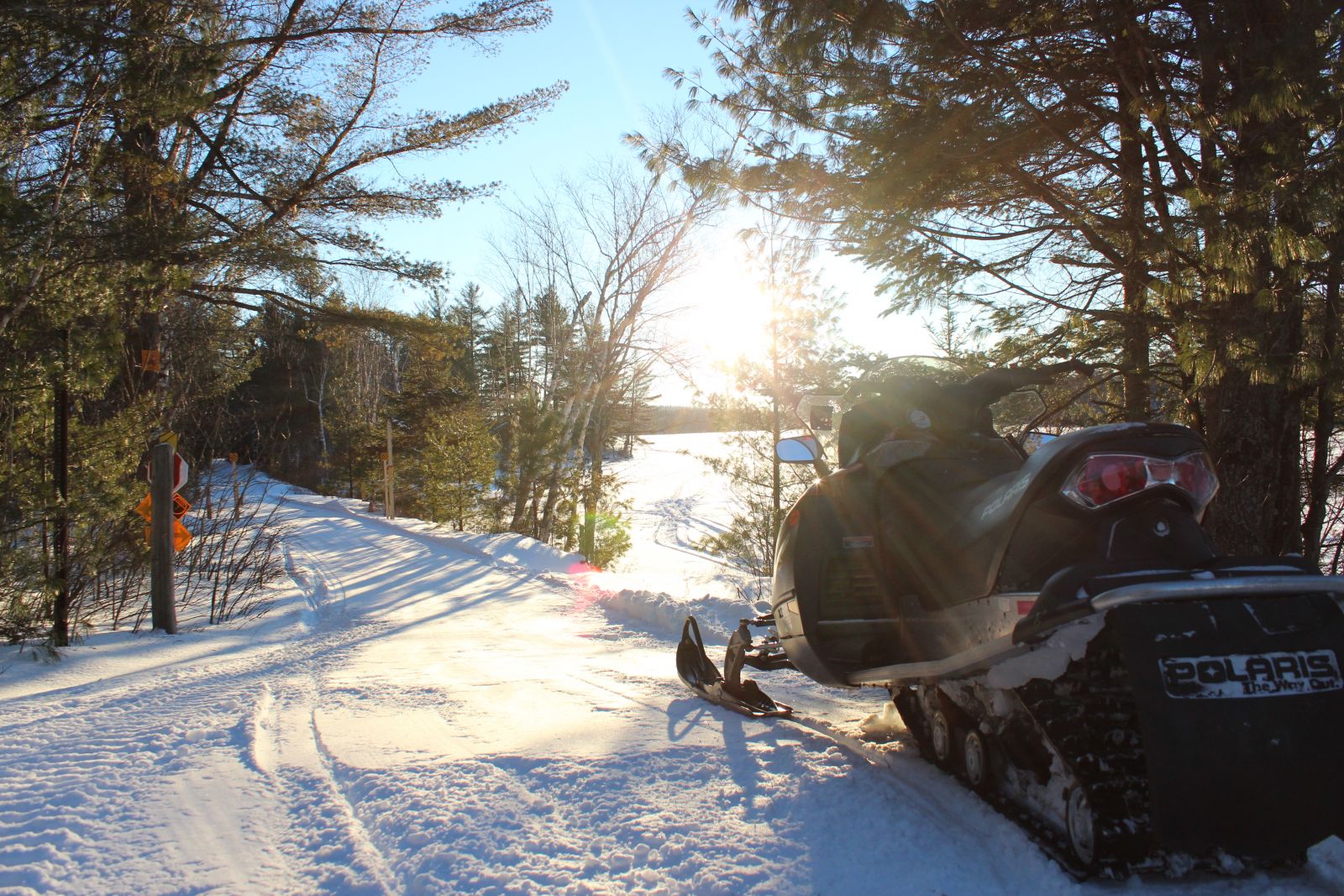 Our destination was Belly's Mt. View Inn, a 30-mile trip from the road. The first section of the ride was mostly straight and level, which gave me a chance to get used to the sled. Along the way, we passed through snow-speckled evergreens, wetlands and views of Whiteface Mountain. We crossed a couple of roads and turned at an intersection with another snowmobile trail. I started to feel more comfortable and used a straightaway bordering a lake to nudge the machine past the 25-mph mark.

Traveling by snowmobile is a lot different than driving a car. You're exposed to the elements, and every bump and turn makes your entire body move, which makes 30 mph feel like a roller coaster. Jim led us over some impressive hills that were flanked by small, rocky mountains, along a power line corridor and through a dense forest. At one point we had to hug our sleds as we glided under a fallen white birch tree; another rolling section had me bouncing off of my seat as I sped along. The varied terrain gave me a good sense of why people do this — it's fun.

We arrived at Belly's and parked next to the other snowmobiles. They were the only vehicles in the lot save for a lone pickup truck. Once we were settled at the bar I asked to meet Belly, who immediately emerged from the kitchen with a crescent-moon smile on his face. Here was a man who's never at a loss for a joke, the kind of guy who shakes your hand and sincerely tries to remember your name the next time you come in. Don't worry about finding common ground with Belly. When you're at his place, you're on it. 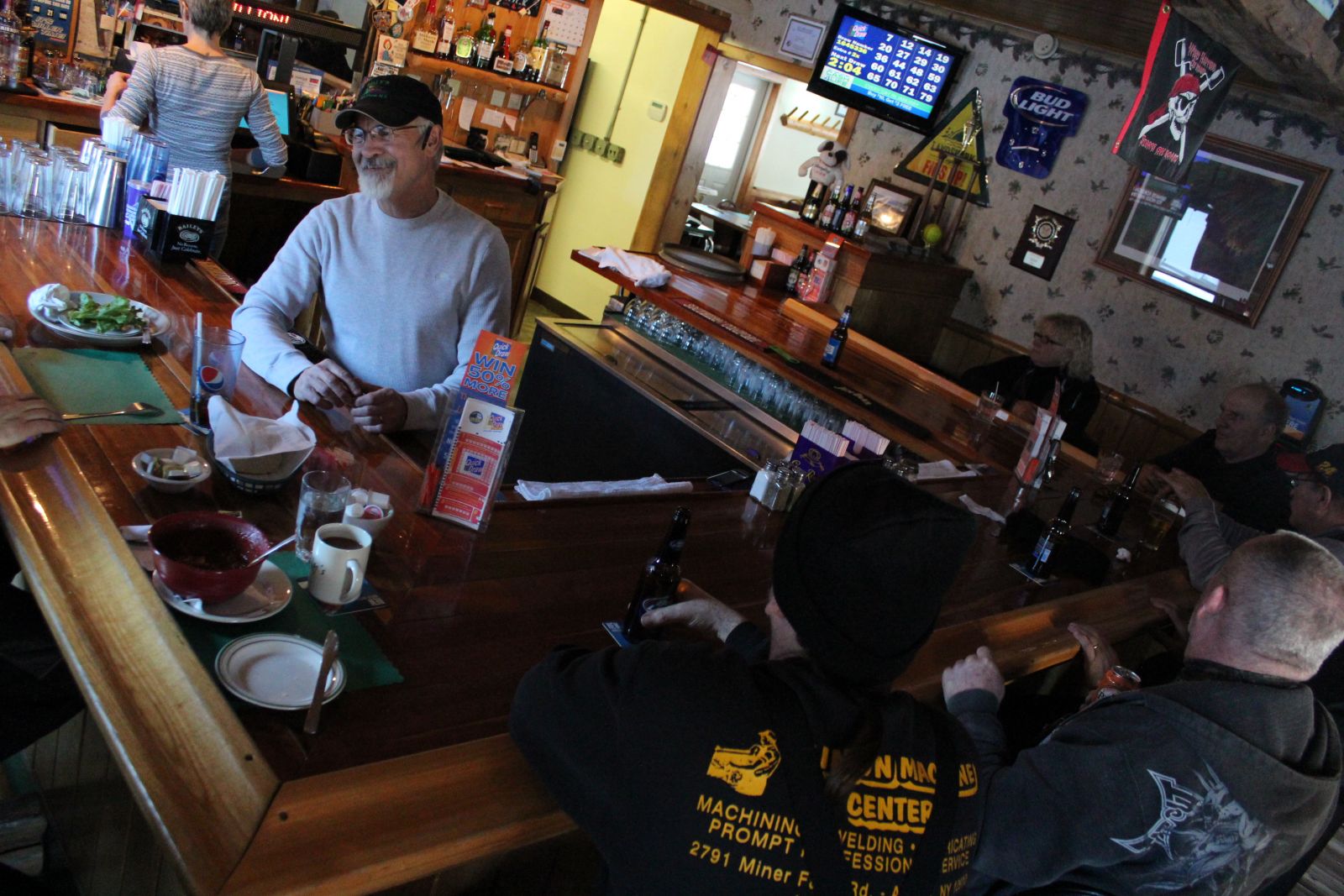 Belly told me snowmobilers are the lifeblood of his restaurant every winter. Their sleds fill the parking lot and spill into the field next door. He recalled a day last year, when his staff served 350 riders in one day. That's a big number for a little business.

"They come in, they order their food, drink a beer and they're gone," Belly said. "We turn tables over fast because they all just want to get back out on the trail."

And there are hundreds of miles of trail to choose from. Over an enormous bowl of chili, Jim explained that the Lake Placid Snowmobile Club started 15 years ago to improve the quality of snowmobiling in Lake Placid. Someday, he'd like to see riders take the rail corridor from other towns, like Tupper Lake, into Lake Placid, where they could park at the train depot and take a shuttle bus into downtown.

"That's what snowmobilers do," Jim said. "They ride in, they spend money, and they continue on."

It was difficult not to understand the appeal of the sport. Fueled by coffee and a big, cheap lunch, I felt more confident pushing the sled past 40 mph. With the forest whizzing by and the setting sun painting Whiteface Mountain every shade of pink, we got back to our cars in record time.

"Wow, that didn't take long," I said as I pulled my helmet off. I was delighted.

Jim took off his helmet, revealing a big grin.

Lake Placid is a great starting point for any Adirondack adventure. It's also a great place for shopping, dining and lodging.

All in the family

Bond’s got nothing on us

Coasting along the Coast

From the archives: 7 reasons not to sled Adks