It’s October, so Oktoberfest and beer is on everyone’s mind, but I recently visited a distillery in Keene and uncovered a real Adirondack Mountain gem that involves a whole different kind of spirits! Keith Van Sise incorporated Gristmill Distillers in July 2013, and he and his partner, Steph Hadik, use locally-sourced ingredients to produce tasty spirits for what is quickly becoming a 100-proof business.

In 2007, New York State passed the Farm Distillery Act, which made distilling accessible to smaller businesses, and several years ago Keith pursued a license to operate a New York State farm distillery. After obtaining federal and state permits, touring a number of other small distilleries, and having the barn on their Keene property rezoned for commercial use, they were finally licensed and ready to go. They began distilling corn whiskey – better known as moonshine - at the end of 2014, and started selling their first product, the Rusty Piton Corn Whiskey, in April this year. In addition, they launched their Blackfly Bourbon Whiskey on Labor Day weekend this year, and the Apple Brandy on Columbus Day weekend this year. But the idea to start distilling their own whiskey took shape a couple of years before that, while hanging around a fire after a cold day outdoors. 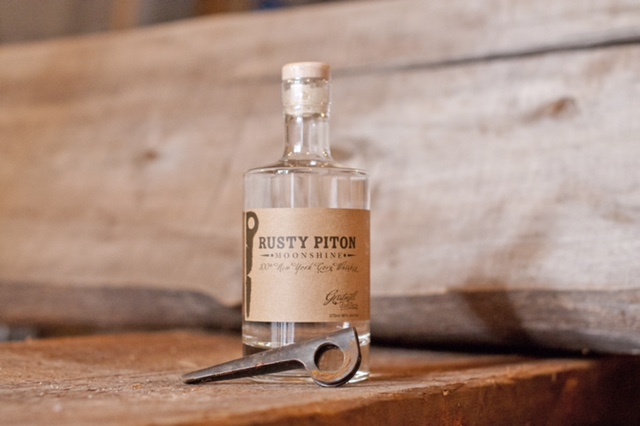 Steph (who is an editor by profession and the PR arm of the operation) says the idea started out as casual conversation among a bunch of friends who were visiting her and Keith one winter weekend at their home in Keene. After a full day of skiing, climbing and hiking, the group gathered around the fire, most of them with a drink in their hands. “A lot of people were drinking whiskey,” she said, “and that winter the conversation would always veer towards the topic of making it.”

Steph says it wasn’t surprising that distilling went from the idea phase to the actual working phase pretty quickly. “If you know Keith and some of our friends…just talking about an idea means it will start to take shape, and they will run with it. They’re very enthusiastic about the things they’re interested in!” She says Keith’s personality is one that once he decides to do something, he’s all in. Supportive friends have also helped move the business along. 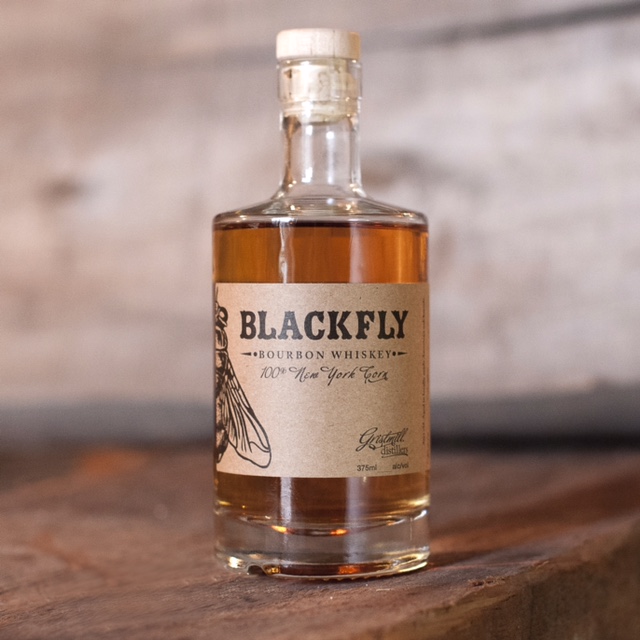 As a licensed New York State farm distillery, the only limitation Gristmill Distillers has in the ingredients they use is that they have to be New York products. This is just fine with Keith and Steph, who don’t see that as a limitation at all. She says they want to be using local crops and supporting local farmers. They think that’s really important, especially in an area like the Adirondacks, where local businesses are the backbone of our communities.

Not only are all their ingredients from New York, everything is locally-sourced: The corn is grown by Adirondack Organic Grains, a farm just down the road from the barn in Keene, in Essex, NY;  the apples are grown, picked and pressed by Ruff’s Orchard (in Peru, NY); and their barrels are made to order from US Barrel (from NY oak), in nearby Wilmington. And the water flows from a spring that is literally a few yards from their front door.

When I visited the distillery, I was surprised at what was inside that barn! What looked like a science experiment turned out to be the steel and copper stills, where the corn mash is fermented and then distilled with the water from the spring. Gristmill Distillers whiskey is distilled twice, which adds to its smooth taste. I won’t pretend to have understood the process – it looked complicated and I am sure if I were to describe it, I would get it wrong! But a couple of things stood out to me: it was very clean, and the oak barrels and other ingredients made the space smell wonderful! 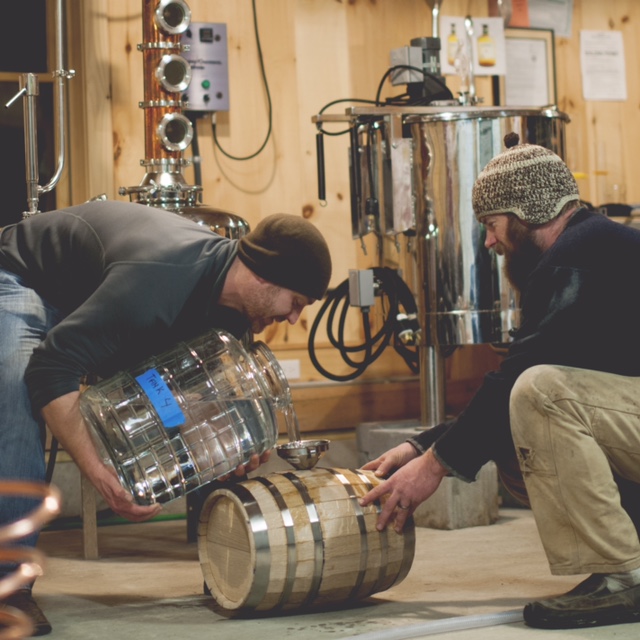 They had just packaged some of their new apple brandy (which I got to try – delicious!), so the bottles and barrels were right out front when I walked in. They are currently using five and 10 gallon barrels from US Barrel to age the bourbon and apple brandy, and Steph says they are lucky to have a cooper (barrel-maker) so local. She pointed out how beautiful the barrels are – “literally works of art!” – but also noted that they turn out some great tasting whiskey!

The distillery is just a large open area in the barn, with equipment spread out so there is space to work. In addition to Keith and Steph, there are three other employees of the distillery, there at varying times based on what needs to be done: Tyler Eaton, Maxwell Eaton, and Leigh Campbell. All of them, like Keith and Steph, have other “day” jobs, but are committed to Gristmill Distillers and helping the business grow. Future plans include experimentation with other grains, a tasting room and a storefront at the distillery, but all in good time. One thing the Gristmill Distillers have learned is that the whiskey business is about patience...and a great idea born literally out of a whiskey glass! 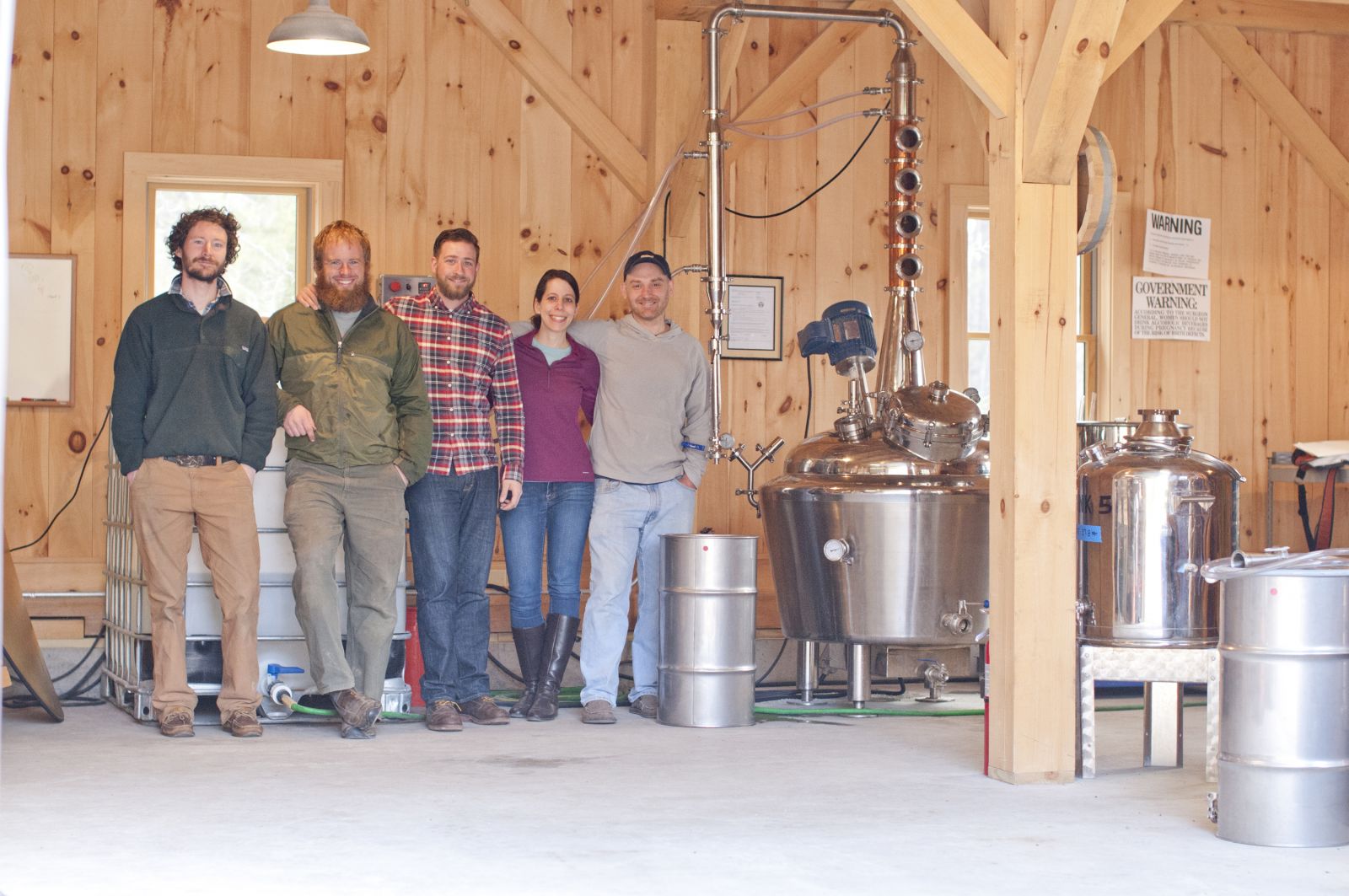 Where To Get It

You can get a taste of Gristmill Distillers products at many local restaurants, including the Ausable Inn in Keene Valley, Mirror Lake Inn in Lake Placid and Smoke Signals in Lake Placid. In addition, you can get your own bottle locally, as well, at Boquet Liquor Shop, The Smoking Cork, Cedar Run, Each Branch Organics and Terry Robards Wines and Spirits. You might even have seen them at some of the local farmers' markets this summer.

Keith and the crew will also happily provide tours of the distillery, by appointment. You can check out where the magic happens by contacting them through the website, at gristmilldistillers.com.

I wasn’t sure about the corn whiskey, because I tend to like sweeter things, but the apple brandy I tasted was so good I wanted to try the Rusty Piton. Plus, the idea that it is literally made from ingredients right next door appeals to me. On the distillery’s website, they have a recipe for moose’shine, which included the Rusty Piton, ginger beer, lime juice and simple syrup. I relaxed with that after a long walk in the woods, and can definitely see what all the fuss is about. Make sure as the weather turns colder, you have your bottle of Gristmill Distillers whiskey, brandy or bourbon on-hand! 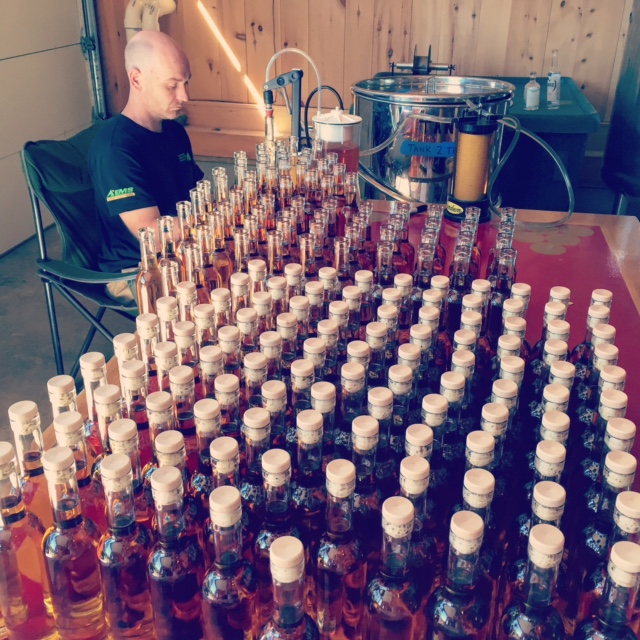 Ready to plan your High Peaks adventure? Be sure to grab a warm drink at one of our local eateries before retiring to your cozy lodging after a long day on the trails!

Looking for more unique ADK locales? Check these out:

In search of a missing chasm.

Where leather, snowmobiles, and history collide.

The Brighton spot in the Adirondacks.