The Skinny Slide on

Upper Wolf Jaw Mountain used to be a small scar on the face of the peak, but after Irene came through she stretched that scar out and made a rather large path through the preserve. I had recently been on the old slide a couple of times and the new one not long after the tropical storm and I find this to be a fascinating winter adventure. There was a larger group of adventure seekers on this trip, five snowshoers to be more exact. We had also left a bit earlier with plans of tapping the summit of Lower Wolf Jaw Mountain on the way out. 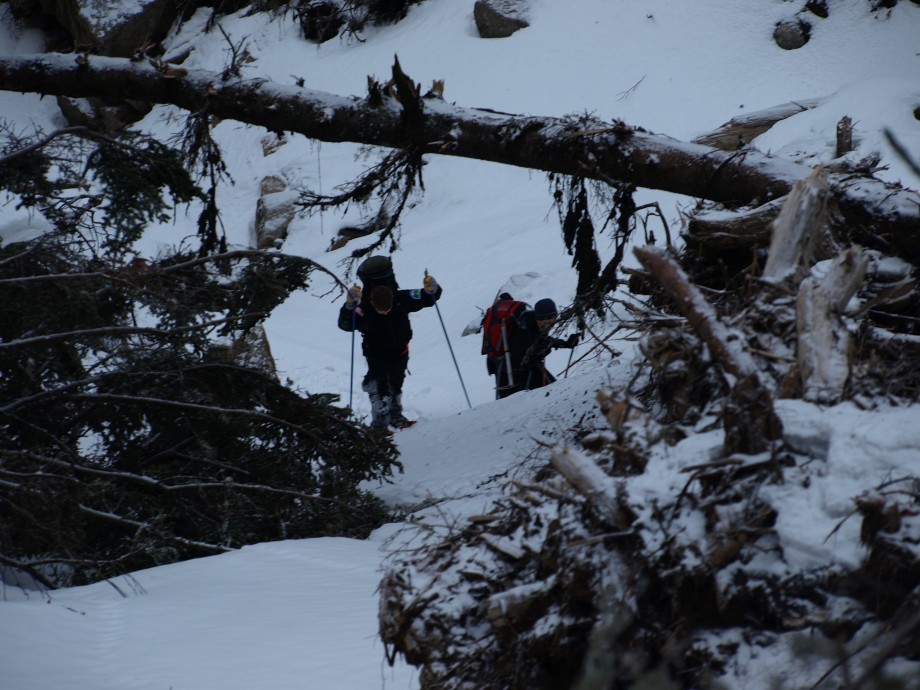 Our hike into Johns Brook Valley

Leaving from the Garden in Keene Valley we made spot-on time over the highway, referred to as the North Side Trail, into the Interior Outpost. After a short break on the porch of the cabin, we adjusted our packs and continued to push on. Crossing the somewhat new suspension bridge was a nice treat that ate up another few minutes for taking pictures. Once back in the woods on a trail with fewer distractions we moved along rather quickly until we started taking more pictures of the scars left by Irene. I am always so amazed at the luck – the lean-to got spared by the landslide, but the privy ended up twisted in a tree. We continued following the trail to the water source that the slide followed, which is no more than a tiny stream. Once on the slide we made the decision to stick with snowshoes and not go with crampons. The snow was deep and the ice not so threatening and we needed the floatation, but that would soon change.

We found ourselves looking up at a rather imposing cliff of yellowish ice and with a quick look at each other and no need for words, we changed into full crampons. Now with fingers numb and hopes high we started to pick apart the cliff in sections. We stuck to the areas with more snow coverage in hopes of better traction and bite. We meandered up the steep slope with only one small section of caution, but it ended up being much less of an issue than forecasted.  We kept the snowshoes on in anticipation of more ice and it was so delivered, but none as extreme as we felt the prior was, or maybe we just felt more confident.  We topped off over the headwall and back into the woods, where very deep snow welcomed us – the snowshoes went back on as we sunk waist deep. 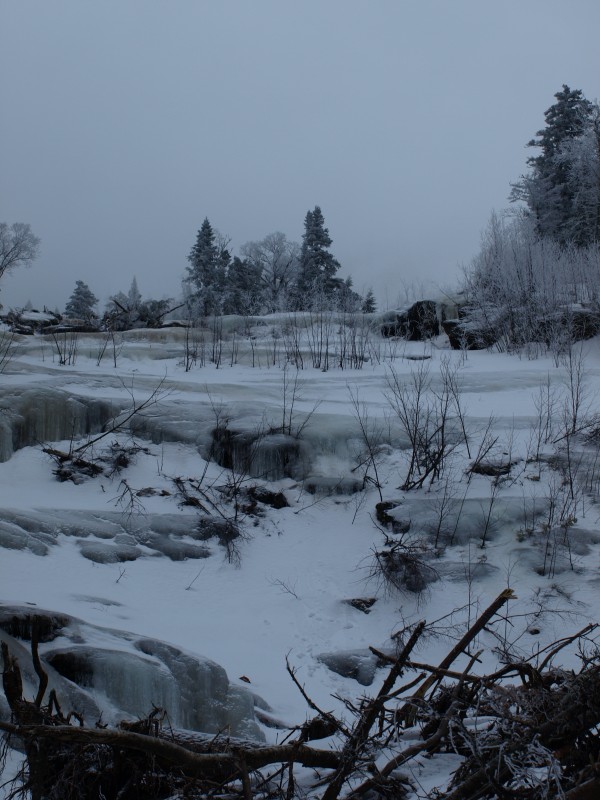 In the woods we had a bit of navigation to do, but using the rule of up, we had no real issues. The biggest problem was circumnavigating and pulling ourselves up over a small pitches and cliffs. It’s amazing how everything looks so different in the winter and how much harder bushwhacking can be when you are fighting unconsolidated snow. The forest opened up as we approached the Great Range Trail and then we were there. We had come out about 0.1 miles from the actual summit. We quickly topped off, ate our partially frozen lunch, changed into dry shirts to wick away the chill, I added moleskin to a blister on my heel and down we went.

We opted not to attempt the ice on the slide as a descent route and a few in the party wanted to summit Lower Wolf Jaw so we descended via the Great Range Trail, down to Wolf Jaw Notch. This descent was very fast and the few who wanted Lower Wolf Jaw went ahead as a couple of us chose to not go. I had previously been on Lower Wolf Jaw a few times in winter so I stayed back with those who opted out. We moved much slower as to give the other group time to summit and catch up to us. They must have been all but running up that peak, because it took them no time at all to catch back up to us. A final break at the lean-to proved to be the opportunity that stiffened up the muscles, but the break at the lean-to on the North Side Trail attested to be the one we should have avoided. But no matter we were out and eating hot pie and soup (not at the same time) at the Noonmark Diner before we knew it. 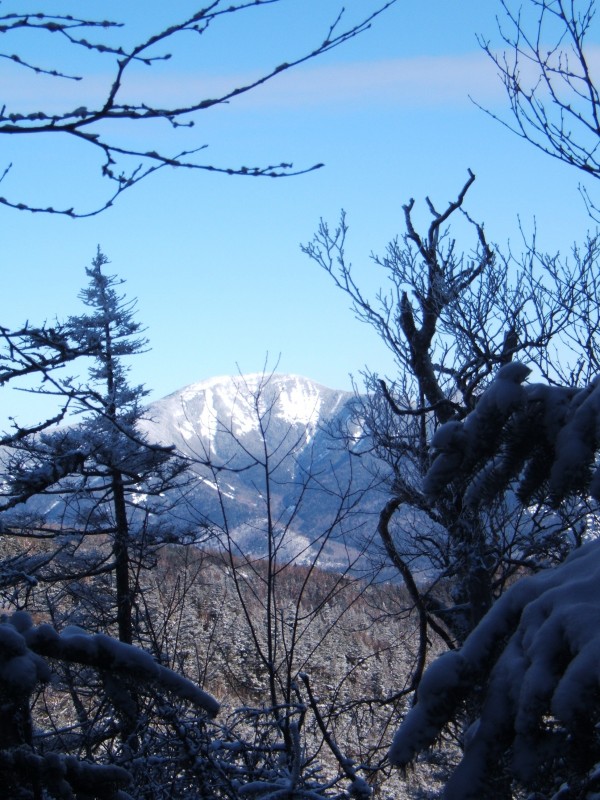 Slide climbing is not for everyone and should be approached with caution and care. Never go alone and for the first time you should consider going with a professional with experience. Check out a previous blog on slide climbing for some more information. Interested in checking out the Skinny Slide or other Adirondack Slide in winter, maybe a different ascent of a High Peak or an intro to mountaineering course? Check out some of our local guide services for details.  Planning on sticking around for a few days but want some good food, a soft bed and some fine wine – we got ya covered no problem.