A few weeks ago, a guide friend of mine told me about the American martens that have been hanging out at the Adirondack Mountain Club’s Adirondack Loj in Lake Placid. They have apparently been coming to scavenge at the dumpsters and campground for scraps for quite a while this winter, presenting a good opportunity to take photos of these medium-sized members of the weasel family (collectively called mustelids). 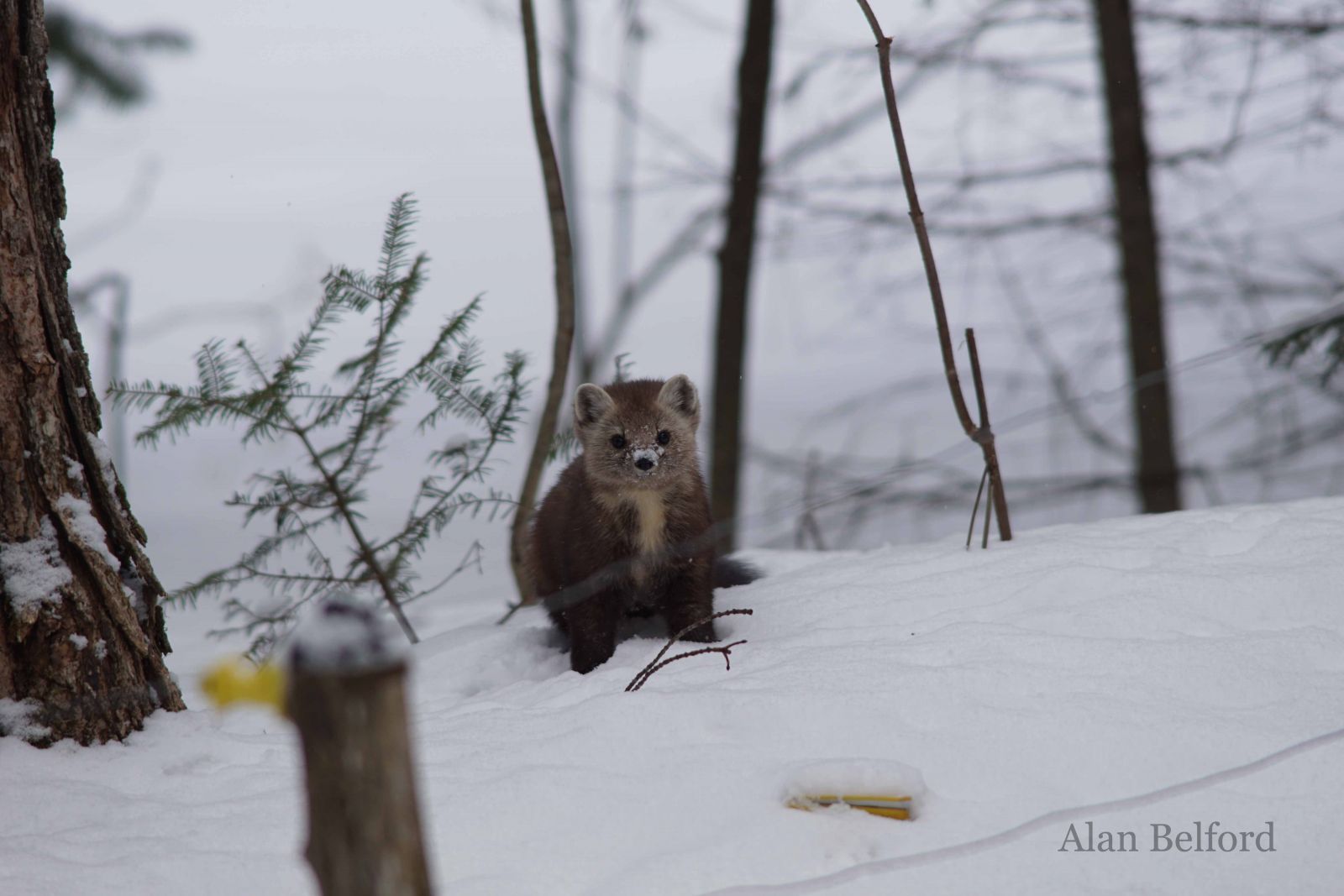 I immediately took the first day I could that offered nice weather for photos, and I went to look for the martens joined by a few family members who were visiting. But a blustery day kept us cold and the martens hidden, so we returned the following day and left happy thanks to much better luck with the martens. I’ve returned a few times since – the opportunity to watch martens isn’t one I want to turn down.

Now, dumpster food isn’t what martens should be eating – it would be better if they didn’t snack on Doritos and Cheez-Its — but I’m sure they are finding nutritious tidbits as well as unhealthy food as they try to find enough to eat in order to make it through the long Adirondack winter. In addition to the human food they are finding, the martens are also catching rodents and other small mammals which are attracted to the calorie cornucopia. Someone I talked to saw one with a recently captured red squirrel, and on one of my visits I spotted a marten which had caught a short-tailed shrew – bounding off through the snow with its catch. 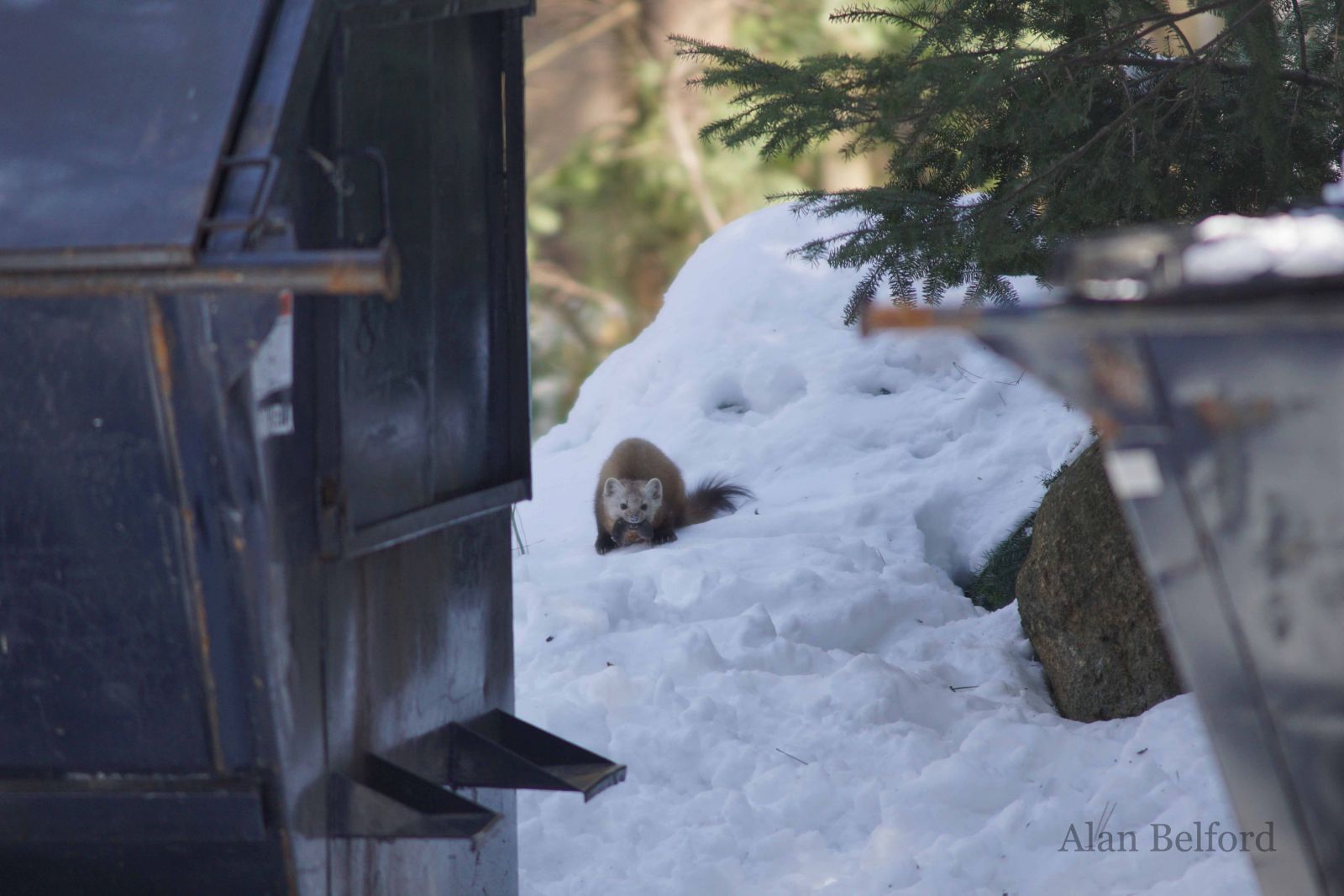 Such is the usual diet of American martens – recently split (as a species) from the European pine marten and the Pacific marten of the American west. But martens are opportunistic feeders, and besides their usual squirrels, mice, voles, shrews, and other small mammals, they will dine on carrion quite regularly, particularly during winter. Hence the ADK’s dumpsters and campground are too tempting to resist.

Martens are excellent tree climbers (and they can also swim quite well), and anyone who goes to see the martens at the Loj will likely spot them scrambling up and down trees. That said, they generally hunt for food on the ground.

One of the concerns for any animal that begins to feed on human food is that they can ingest trash like plastics or toxic items, which can make them sick or perhaps die. In addition, they can become too accustomed to humans and lose their natural fear of people, which could lead to disaster for them down the road. The martens I saw at the Loj were wary but quite tolerant of people – they have to be in order to permit so much commotion of people going this way and that. But the activity of hikers and people at the Loj is a different sort of activity than that of a highway or a main street lined with stores and roving vehicles, so hopefully the martens will remain safe as they find sustenance while winter ends. 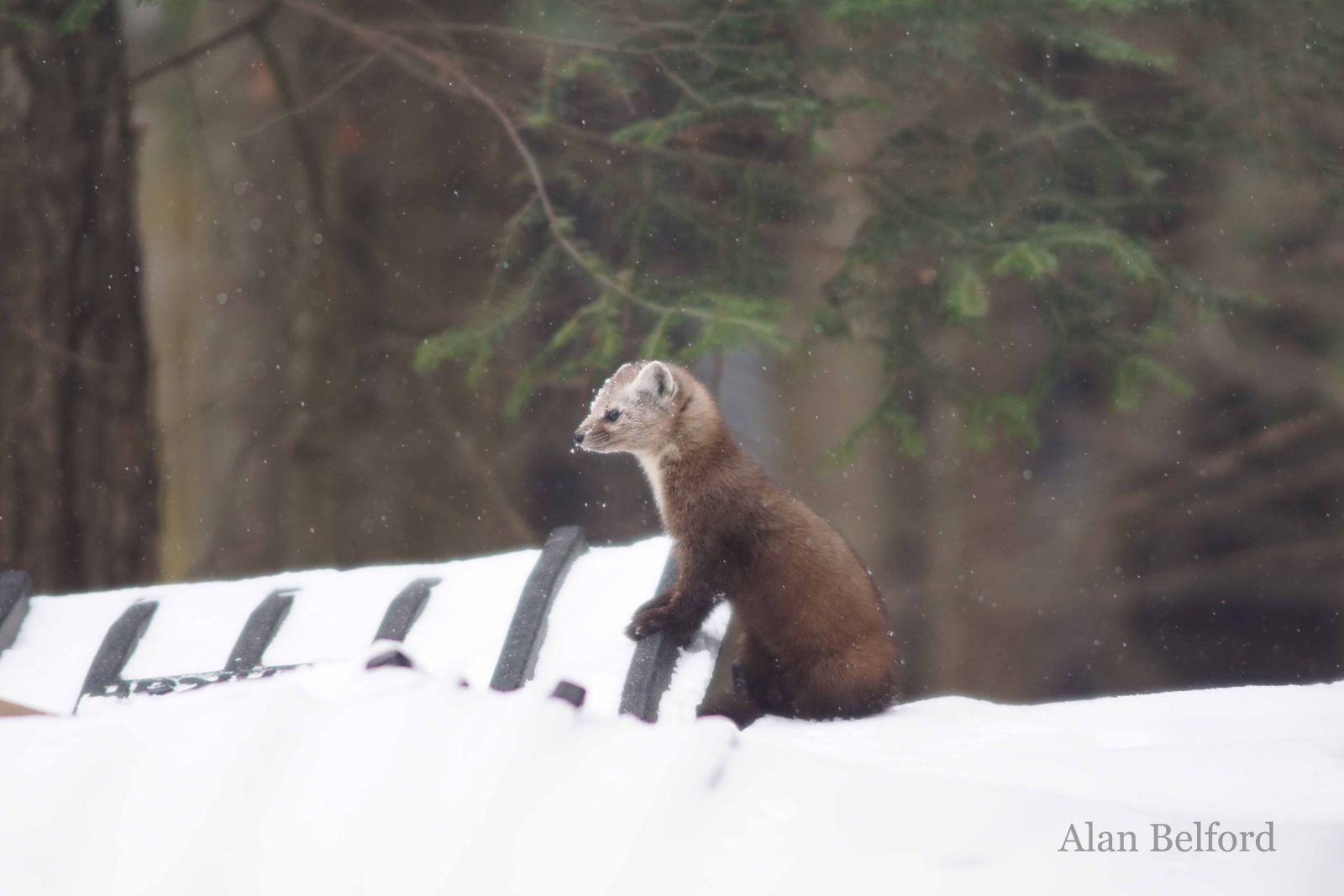 That said, this is a good reminder to us all as we reach spring and begin to think about the upcoming hiking and paddling seasons. If we are not careful with our trash and garbage, it not only sullies and junks-up the natural world and the wilderness areas in which we adventure, it can also have a negative impact on wildlife by making them sick or die, or it gets them in trouble by initiating conflicts with people. This can be an issue for small animals like martens as well as for large ones – after all, our black bears will be emerging hungry from their dens soon. Conflicts between our bruins and hikers have led to the DEC’s requirement of utilizing bear canisters when camping in the Eastern High Peaks Wilderness. Using canisters helps protect both people and bears.

If you go to see the martens

That said, the chance to watch the martens is a fun one, so long as the animals remain safe around the busyness of the Loj in their quest for an easy meal. And it isn’t the busyness of people that will impress anyone who ventures to the Loj. Anyone going to watch or photograph the martens will immediately see how busy the martens themselves have been in their forays around the Loj. Their tracks, showing their characteristic hopping or loping gaits in the snow, are everywhere around the dumpsters as well as all throughout the campground. Interested folks can therefore take a short walk while they look for these dumpster divers by following the road through the campground, the road between the dumpsters, and the small sets of footpaths which connect the various points of interest. 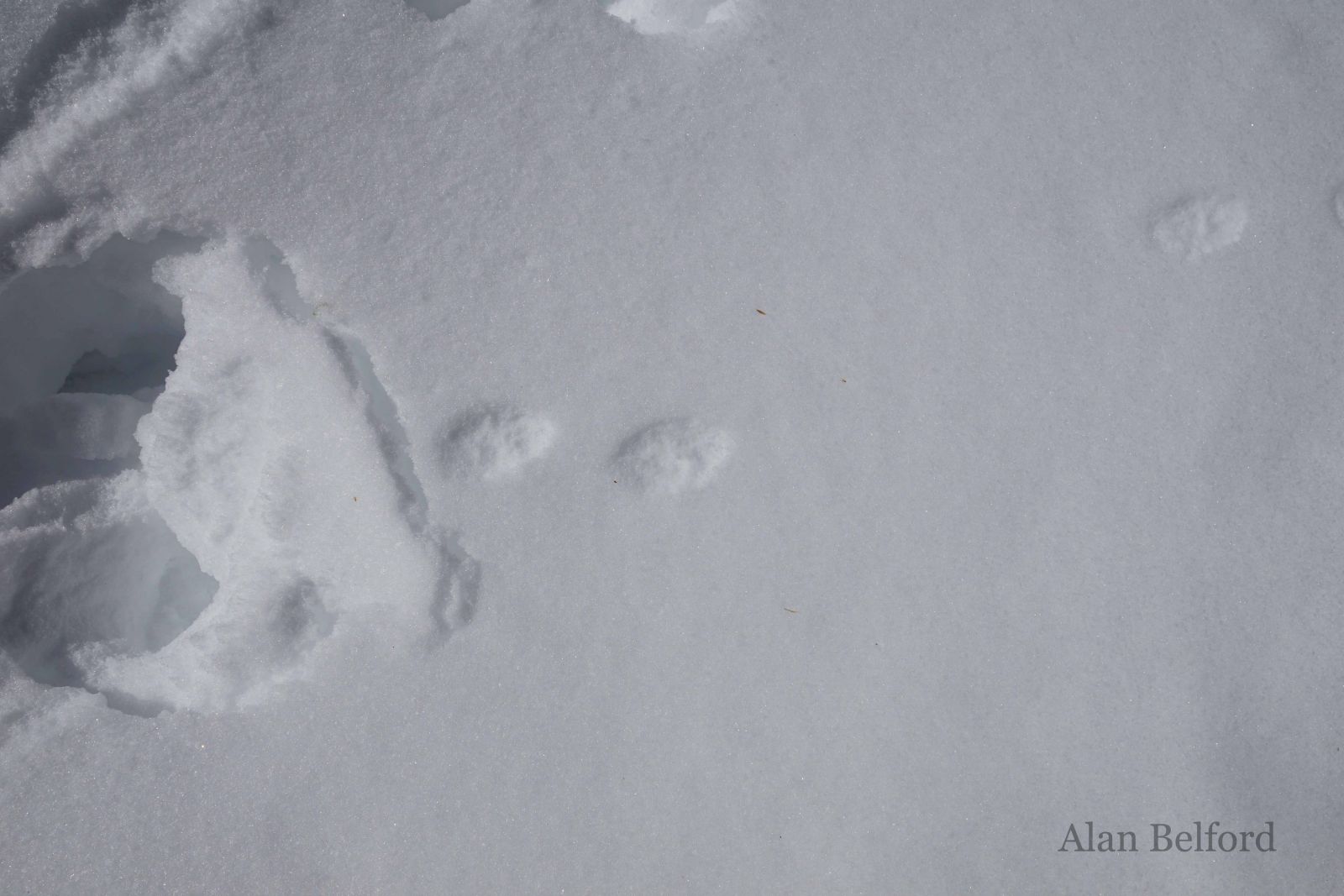 Marten lovers should be mindful to not directly offer the martens food (potentially causing them to lose their natural fear of people – they have plenty of food available there anyway) or to approach them too quickly, thereby spooking them. I found that my best technique was to hang out quietly near the dumpsters and wait for the martens to come to me, and the result was a marten which climbed up a tree behind me on my final visit, making soft humming sounds as it looked at me curiously from one side of the tree and then another, playing a mustelid version of peek-a-boo. 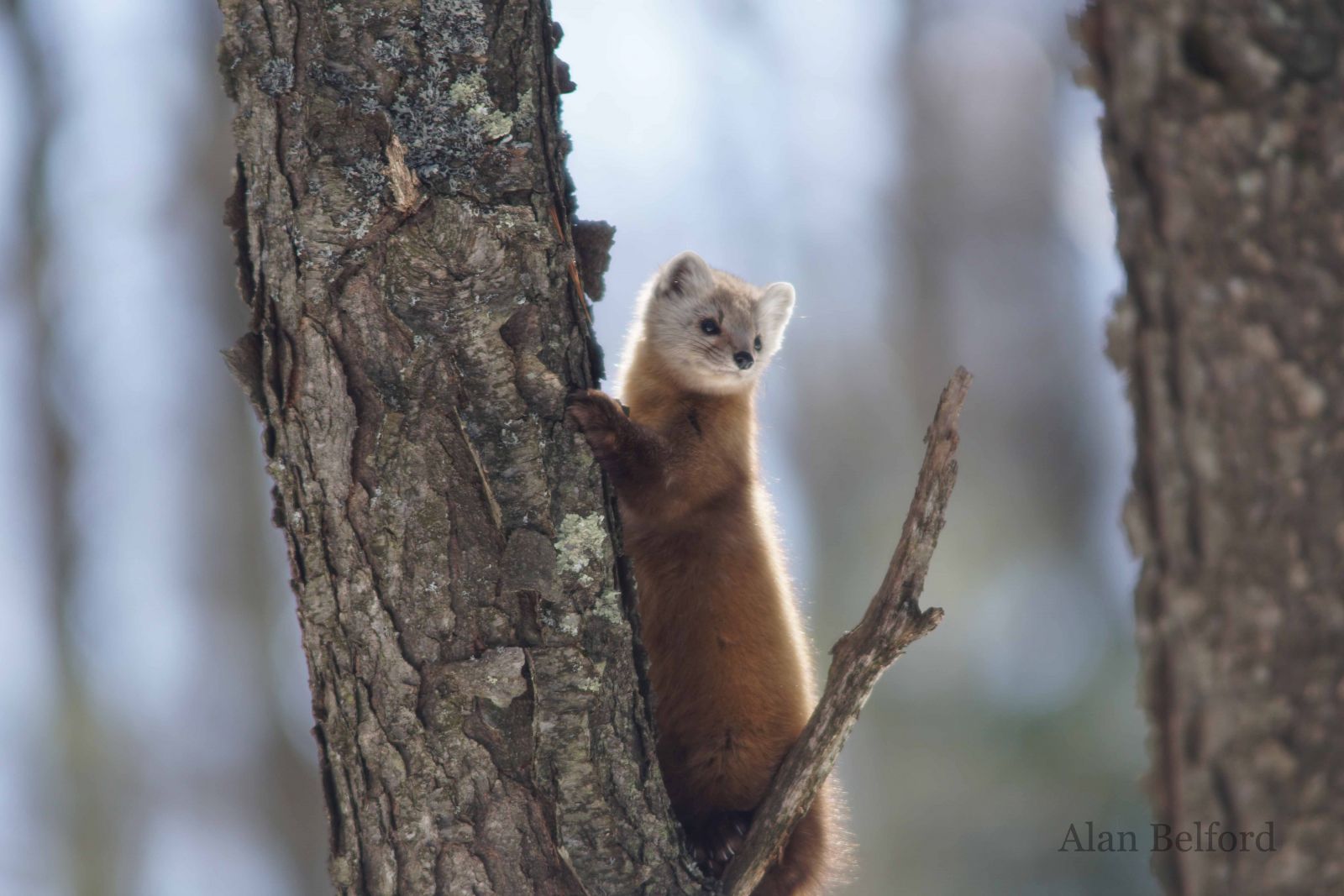 The marten then bounded off from the tree and around the parking lot to loop to the dumpsters from the opposite side, I staying put and trying to snap photos of it as it hopped across the road, a trick that worked on a previous visit. But it was more clever than me and it took a wide loop around me and too far for me to score good images. And so I went back to waiting.

After awhile, and happy with the images I had from it spying on me from the tree, we (my mother had joined me on this trip) decided to leave, only to spot a marten at the dumpsters as we began to pull away in the car! We were clearly being watched as we stood there waiting, and we hadn’t noticed that we were under surveillance. I promptly parked the car and tried a few additional images before the marten hopped off and took up a post in some low conifers to quietly watch us. 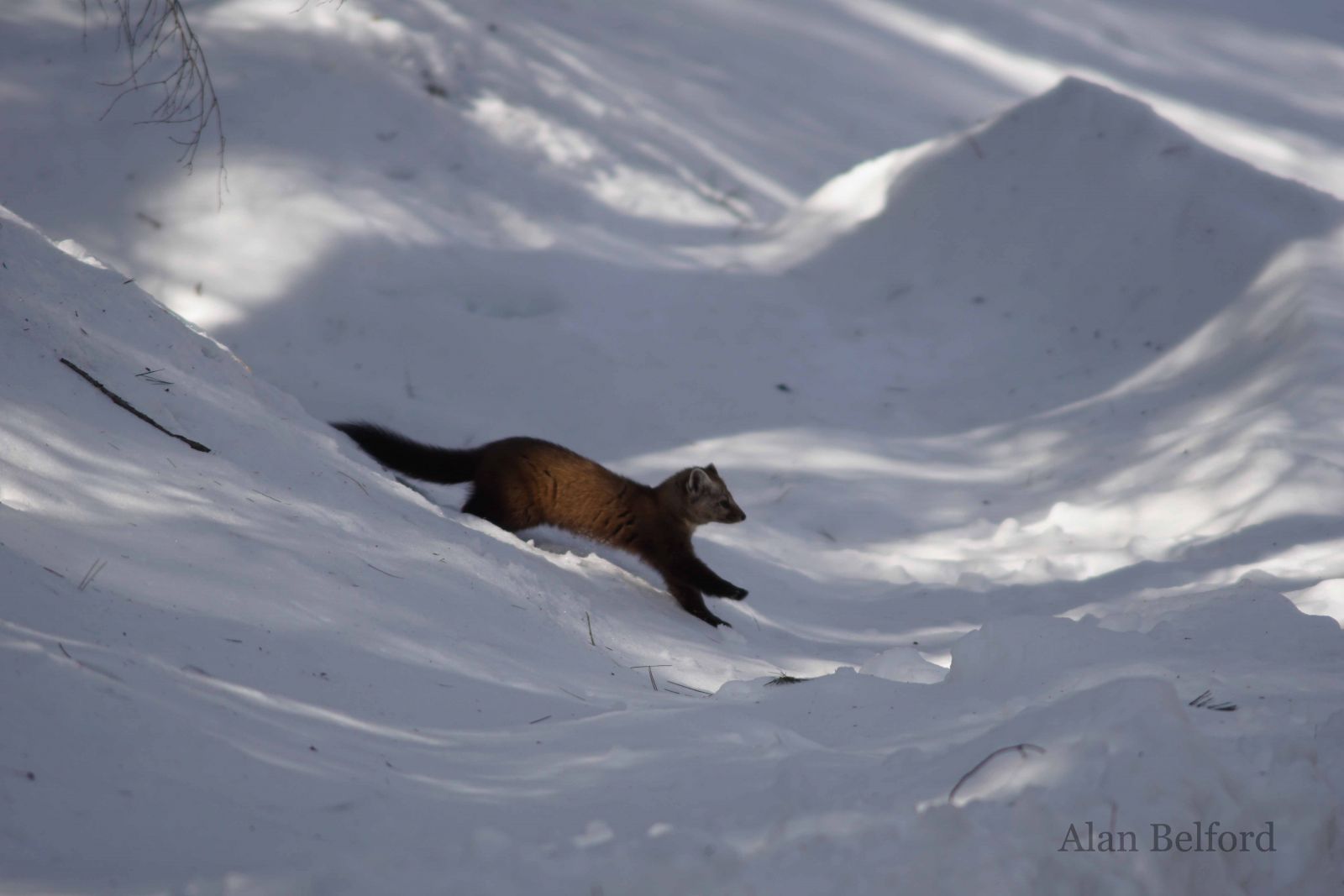 It appeared we were in a waiting game. We could stand and wait for the marten to come out and hope for better images, or we could leave, knowing full well it would come back out immediately. In the end the marten’s patience proved better than our own and we left it alone as it sat in the firs, watching us with curiosity and I think with a bit of a victorious air.

Whether you are interested in seeing wildlife or hiking the High Peaks, now is a great time to plan your spring or summer outdoor adventure. Visit our lodging and dining pages to learn more.