AUTHOR'S NOTE 9/21/16: On my daily commute to Lake Placid, I often spy rock climbers on some of the popular roadside crags along the route. During a recent drive on Route 73 to Keene Valley, I saw some folks on the Spider’s Web, and it reminded me of this blog I wrote a few years ago about climbing on that very cliff.

The rock climbing memory cited in this blog is cemented in my brain, and so is the fact that it was rock climbing that cemented our decision to live in the Adirondacks forever. Guess you’ll have to read it to find out why!

(The following blog was originally published 6/6/12) 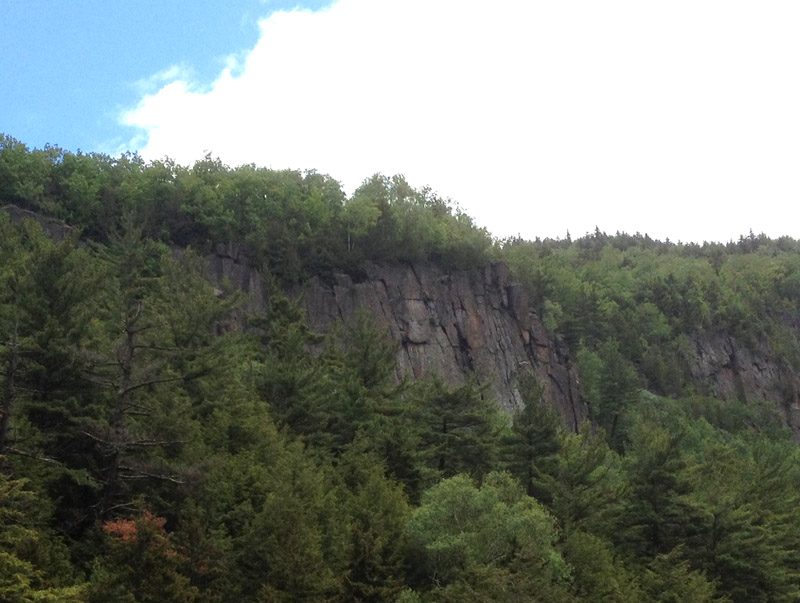 I've always thought of rock climbing as a combination of strength, balance, and puzzle-solving math. The latter is why I think my husband Kevin and his climbing buddies love it so.

I've come to be a mediocre climber by osmosis; the harnesses, shoes, ropes, and leader gear are all part of our household bag of outdoor recreational toys. Kevin is a high-level lead climber, and usually climbs with his stronger friends, but occasionally he and I go on an adventure together.

I appreciate his patience with me; a 5.8 climber with little tolerance for any insects. We did go rock climbing in Red Rocks on our honeymoon. And, years ago, we took a trip across the country, climbing every cliff along the way, including a rather memorable sunburn-filled day on Devil's Tower in Wyoming.

That trip, by the way, cemented our decision to reside in the Adirondacks forever. As we drove north on the last leg of the trip up Interstate 87 and the High Peak vistas came into view, we realized that we lived in the most beautiful landscape in the country. Part of that landscape is a lot of exposed gneiss rock cliffs. So to northeast rock climbers, it's a favorite, too.

The day that I quit climbing, we were ascending a route called "Mr. Roger's Neighborhood" at a cliff called the Spider's Web (because it looks like a web of cracks) in Keene Valley, near Chapel Pond. The name would imply that this is an easy climb, and by seasoned climbers' standards, it IS. Rated a 5.8, which is nearly my limit, it should definitely have been akin to a walk through the Neighborhood of Make Believe.

In an oversimplification of the ratings system, class 5 climbing is where technical rock climbing begins. 5.0 - 5.4 is generally climbing up a ramp or a steep section with good holds. 5.5-5.7 is steeper, more vertical climbing, but still on good holds. 5.8 is vertical climbing on small holds. 5.9 could be slightly overhanging or smaller holds, and it gets increasingly more difficult to a rating of 5.14 in the Adirondacks. (The ratings go to 5.15, but I don't even want to think about that.)

What I didn't know was that the most difficult part of the climb was the first move. Kevin started up the cliff, placing removable protection as he went, as I belayed from below. When he reached the top of the pitch and secured himself to the belay at the top, it was time for me to climb. He would pull the rope slack up as I climbed, and I would remove the gear as I ascended and bring it with me.

I tried to place my hands and feet where I thought I had seen him do so - no go. I couldn't get a good hold - it was a very slight bulge that was tricky to figure out. I didn't know it, but that was the crux of the climb - in hindsight it would have been good for me to know that, because what I was thinking was "if the first move is this hard, there's no WAY I'm gonna make it to the top." I struggled for what seemed like hours but was really just minutes, tiring myself out with attempt after attempt to get that first move, to just get off the ground. It was frustrating; I HAD to go up, to get the gear and move on to the next pitch - (which in this case was just a short walk to a trail to get back down to our packs.) 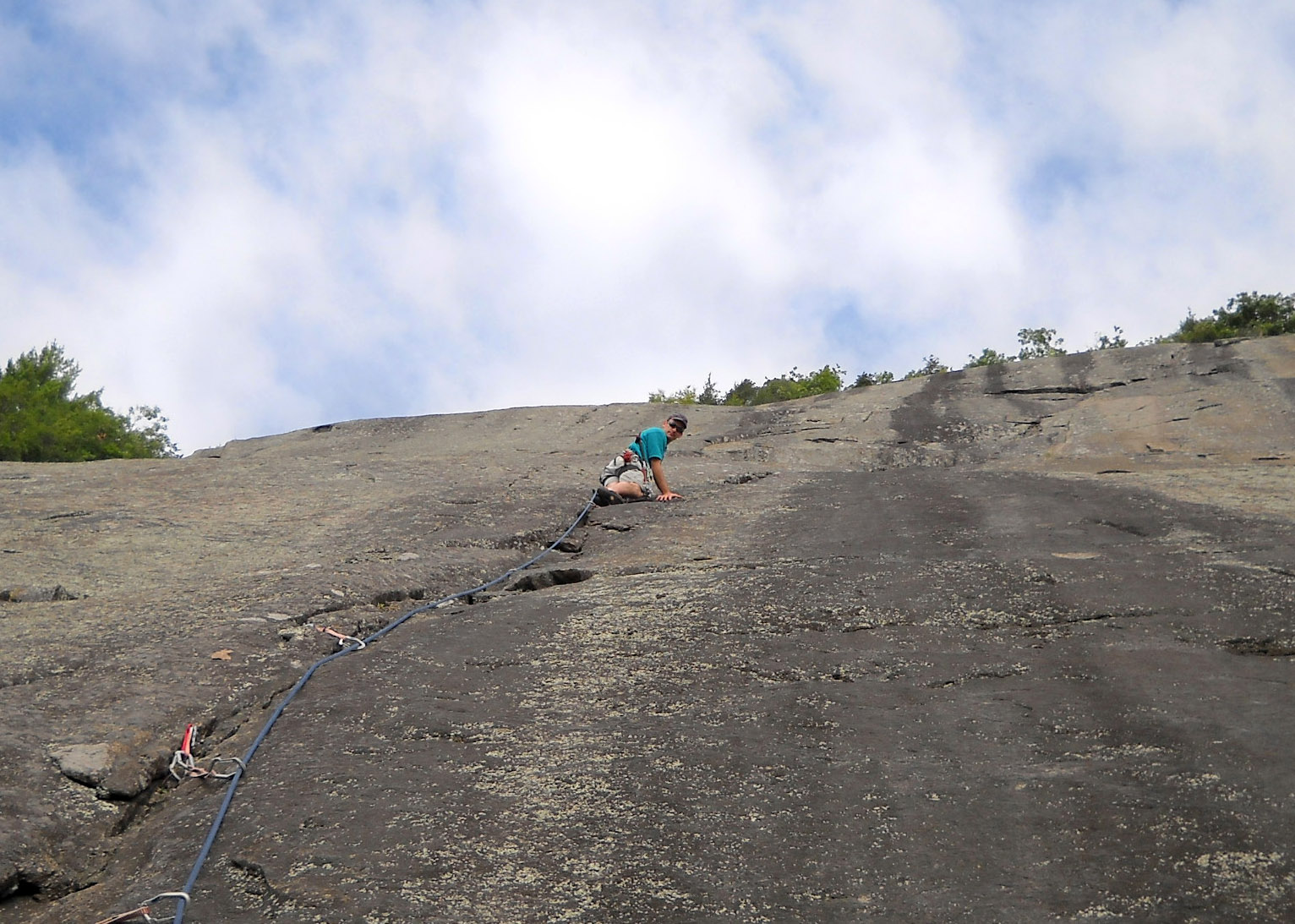 Tired, and defeated, I finally yelled, "Pull me UP!"

He told me to just take it easy, shake it off, and start over. I did, and eventually got that first move, then progressing to the belay with relative ease, but swearing with every foothold that this was the very last time I'd put myself in this position. That was our last pitch for the day, I might not have to mention. And that was my last time climbing, I thought.

That was at least 10 years ago. Though the memory is vivid, I realized that my mental state and fitness level have a lot to do with how much I'll enjoy any sport - and I have since gotten back on the horse, climbing quite a few Adirondack crags, including some day-long slab climbs.

So the moral of the story is that in addition to strength and puzzle-solving math, rock climbing is a mental challenge. The rewards of reaching the top are great, no matter the grade.

So, as Mr. Rogers would, take off your coat, put on your cardigan, and climb.

NOTE: Rock climbing is a technical sport, and the Adirondacks are a prime location to try it out! Hire a knowledgeable licensed Adirondack guide to ensure that your excursion is safe and fun!

-Kimberly Rielly is the director of communications for the Regional Office of Sustainable Tourism. She is afraid of snakes, not heights.

This week the ADKs rock on: