MacNaughton: you know, the 47th peak, the one that has been acclaimed as being a 4000-foot peak, the mountain that is on everyone’s list during or after they finish the 46 High Peaks…yeah, that one. It’s hard to believe that, on a mountain that has become as popular as this particular one has, no trail or even solid, continual herd path has been developed. I was looking forward to being there (for the sixth time) traveling the slopes, but this was actually my first time being there in summer and only my second time up this side of the mountain. I have explored in all other seasons and two other routes, but never in the deadening heat of August.

This time the trip would leave from the lodge under an overcast sky, which promised to open up to mostly sunny by late morning. The group was a bit bigger than those I have been with in the past for this toughly-situated summit; we would be six altogether. MacNaughton rests behind Wallface Mountain on what might be considered a shoulder of the MacIntyre Range, broad shoulders I might add. At roughly 8.5-miles away, this route boasts a trail whose condition is not so trustworthy and an ending with a steep bushwhack.

Like a dragonfly in pursuit of a meal, we were off. With a swift clip in our step, we quickly passed by the Mount Jo trails and climbed our way past several cross-country ski trails. Before we could blink, we were at the Rocky Falls Trail. We talked about doing the Rocky Falls Loop on the way out, but even our optimistic group knew the chances of that were slim. 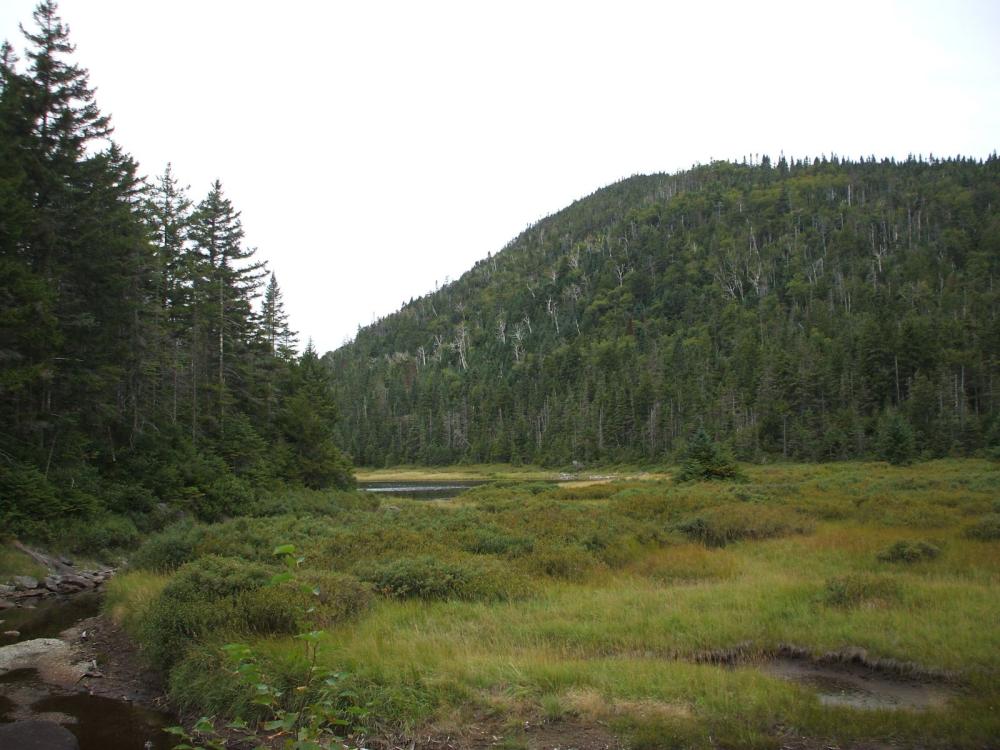 The deep hammering of the pileated woodpecker thumped in our ears as we continued our assault on the trail to reach Scott Clearing in a timely manner. Flying by the Scott Lean-to, almost going unnoticed, we soon stood at the base of the old rock dam that once flooded Scott Clearing. We climbed to the top of what remained, as this is almost a customary rite of passage for those who have never done it. We took a well-deserved break, taking in the wonders of the colorful river rocks in Indian Pass Brook. Now energized, some of us knew what was ahead. Unless conditions had changed, which with continual trail work they often do, we expected this trail to be a mess (there’s that optimism again!). 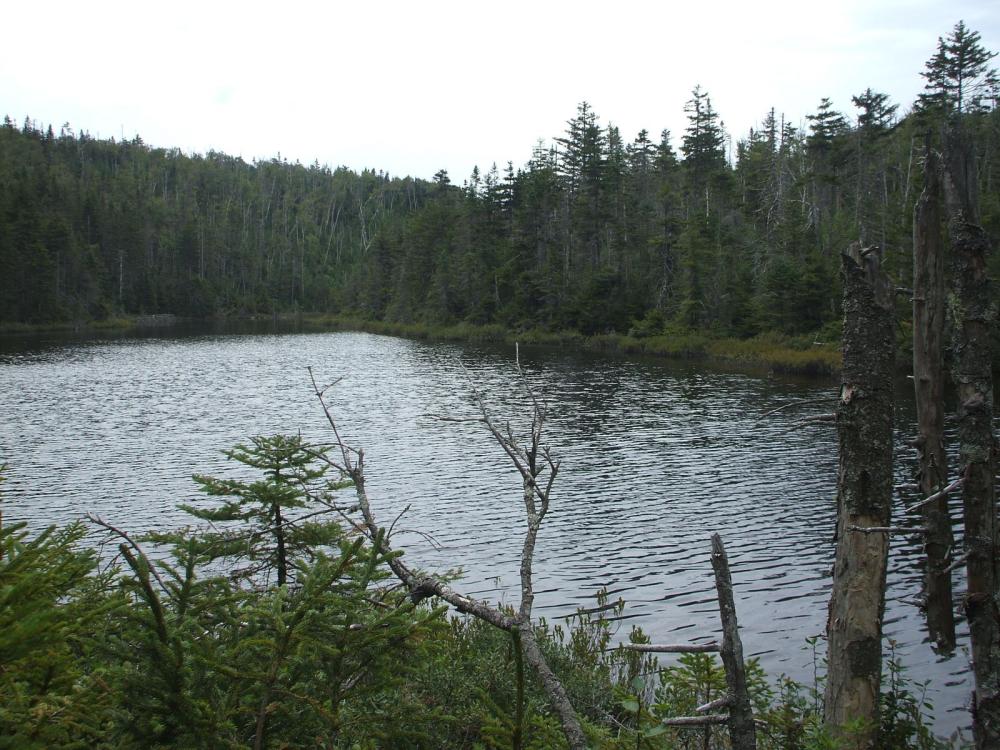 Climbing right out of the gate, we started up the Scott and Wallface Ponds Trail. Continually steep, we worked our way up the slopes over the shoulder of Lost Pond Peak to the north. Once we crested the steep slopes we knew a break was coming, but we had forgotten that we would lose some of the elevation we just worked so hard to achieve, and we knew we would pay for it at the end of the day. Now at the site of the old dam on Scott Pond, we enjoyed the scenic vistas out over the grassy pond before we moved on toward Wallface Ponds. 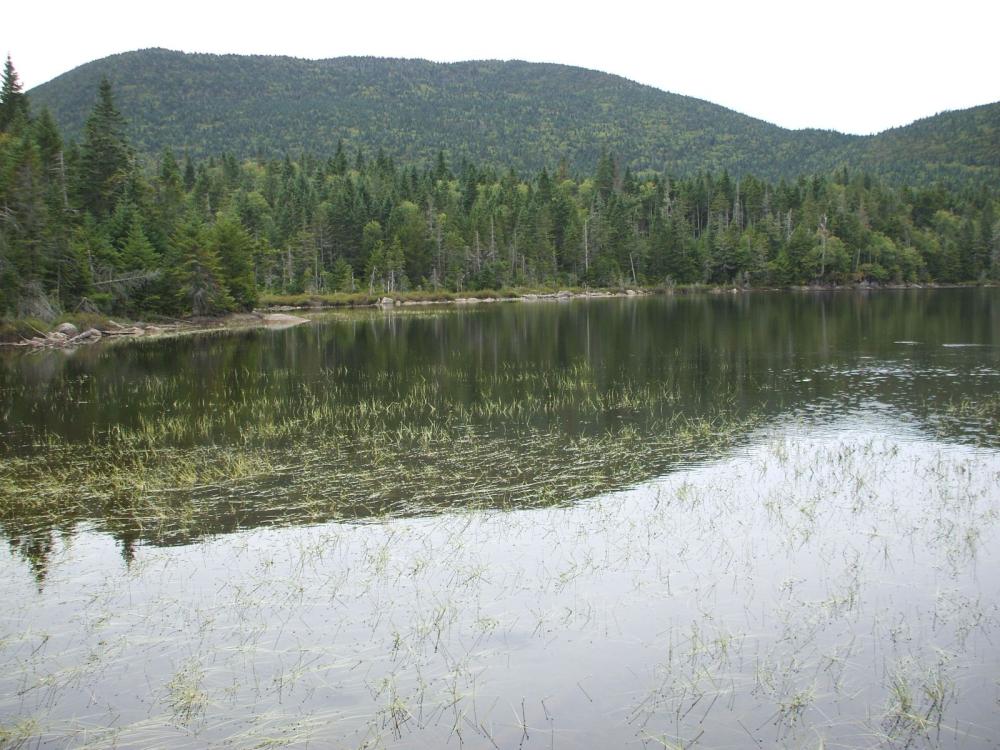 The mud was wet and squishy under our feet as we moved away from Scott Pond and started a much more mellow climb. This brought us to an interesting boggy area near the larger of the Wallface Ponds.  Getting across wasn’t too bad, but a definite balancing act in spots made it interesting to say the least! Standing at the shore of Wallface Pond, we again took a short break before we needed to prod ourselves to move forward up the flanks of the mountain.

We found the herd path, which is a path created and maintained by hikers themselves, that has started to develop out of the camping areas.This herd path would get us around the pond and to the outlet much quicker and easier because it provided a clear way through the dense balsams. The outlet crossing was an easy and scenic one, as we could see down the length of the two Wallface Ponds.  When we gained the herd path on the opposite side, I was quite surprised in just how well the herd path was developing. But no sooner did I think it and it was gone. I might have taken a wrong turn at some point, but it was getting faint anyway. What typically happens in an open area like we were in is that hikers start to fan out when a defined and marked trail is not apparent. This fanning out is a good thing, because it protects the wild of the mountain. We would now need to rely on our GPS, map, compass and memory of the area to continue up the peak. While my memory can be iffy at times – ask me what I had for lunch, and I won’t be able to recall – but ask me about a mountain and I am right there.  So, that said, my memory of the climb was very good. 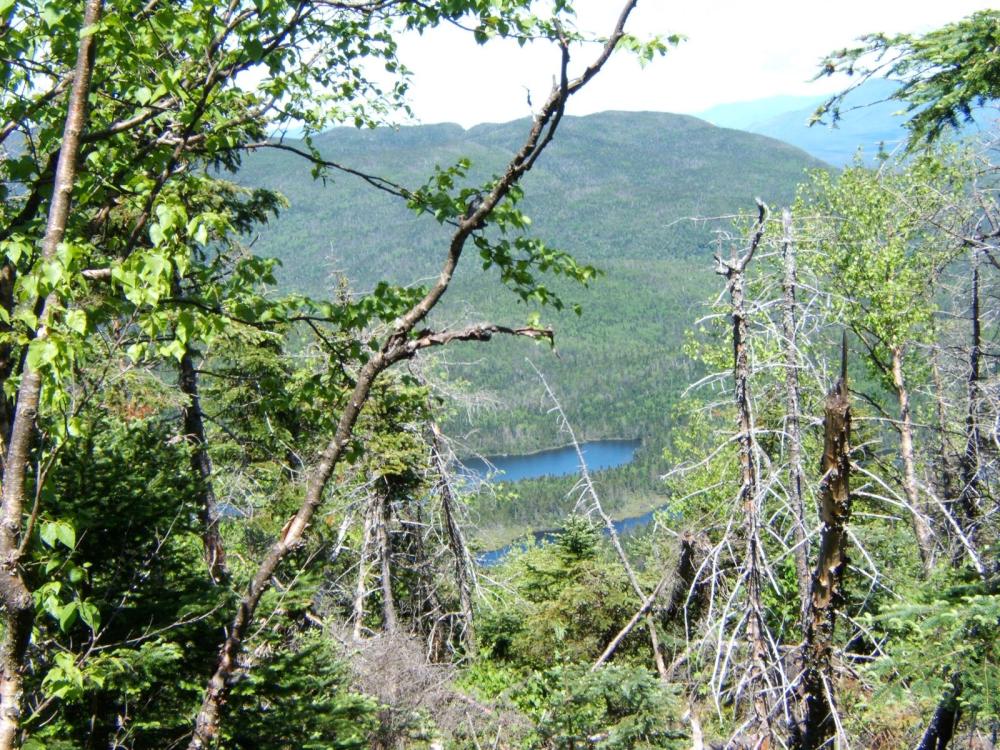 I knew from past experiences to not go directly for the summit from this low lying area but to head a bit to the left and south of the summit along the ridge. The crown around the summit is very unforgiving and in some areas too steep and impenetrable. The spruce and balsams that guard the summit are like roman soldiers and no one gets by without a fight.

As the grade steepened, so did our breathing. The forest, still somewhat hiker-friendly, welcomed us through small areas of dead fall and around thicker stands of evergreens. I was looking for the herd path along the ridge, which I knew was there. A herd path always develops in areas of congregation. The fanning of hikers always gathers again along ridges and summits, making for herd path development and matting down of certain areas inevitable. We were depending on this. 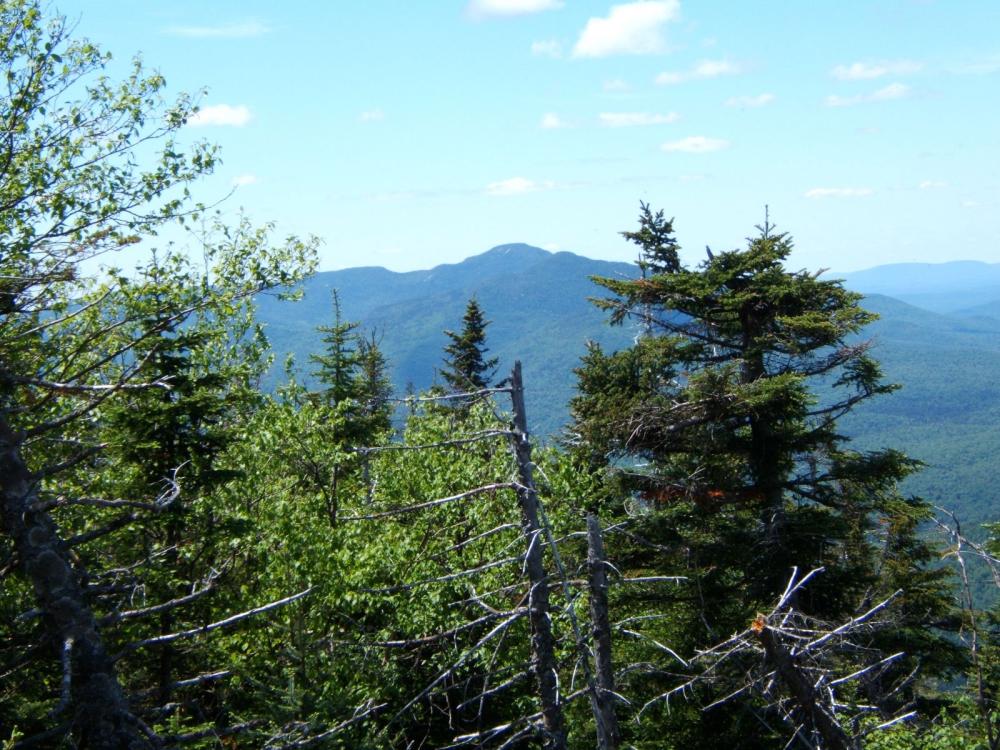 The herd path was there and clear as day. We propped up a couple trekking poles near where we came out of the forest in order to find our jumping off point on the away back. The route up was too good to pass up to reuse as a descent route. The route brought us over the false summit, which has outstanding views, better than the true summit, some might argue. The true summit was only a click away and we were there, sharing the narrow morsel of views out over the Sawtooth Range and into the Sewards we crashed.

A long break was just what we needed, but it was apparent that the sun was descending and the shadows deepening. Sure, we had plenty of time to get back to the trail before dark, but we wanted to be well along our way back to the Loj before we needed to even think about head lamps. An earlier start down also takes into account those pesky unforeseen situations; God forbid if any of them were to happen, but in bushwhacking, you honestly never know.

We found our trekking poles with no problem and jumped off right on schedule, right in line with where we wanted to be. The steep slopes sped up the process of getting back to Wallface Pond, and as if we never left, we were back at the outlet, and then the trail. From here on out it was a cake walk, with no real story to tell. No unsavory mishaps or cool run-ins with wildlife, just a few blisters and a shortage of conversation. I think we were all a bit whipped at the pace we kept up all day, and we all just wanted some “real” food in our systems.  Of course, by real food I mean pizza, wings and an ice cold beer—sounds like Johnny’s Pizza to me!