Of the three most common breeding owl species in the Adirondacks (the Northern Saw-whet Owl, Barred Owl, and Great Horned Owl), the Saw-whet is the smallest and most mysterious. More often heard than seen, this completely nocturnal owl’s secretive nature makes its habits little known to humans.

The Northern Saw-whet Owl’s advertising call is rather unusual. The Birds of North America account for this species describes the male’s call as “A monotonous series of whistled notes on a constant pitch." Birders refer to this vocalization as the “tooting” call. The sound is frequently compared to the beeping sound of a “truck backing up.” This past spring, Betsy Folwell, Creative Director of Adirondack Life, had a Northern Saw-whet Owl nesting outside her Blue Mountain Lake home. She described the sound as a monotonous, insistent beeping in the woods, similar to a smoke detector going off!

I enjoy the sounds of all birds and particularly owl species. We have been fortunate to have Northern Saw-whet Owls nest outside our home and we often hear them during camping trips. My husband complains that their relentless tooting keeps him awake. In the Adirondacks, the peak vocalizing season for Northern Saw-whet Owls is April and May. They nest later than winter nesting Great Horned Owls and earlier than late spring nesting Barred Owls.

Unlike Barred and Great Horned Owls, which are non-migratory, the Northern Saw-whet Owl is a migratory species. As you can see on the following range map below from The Birds of North America, many Northern Saw-whet Owls migrate south in the fall, but they can also be found over-wintering in the Adirondacks. This species is sometimes tallied during the annual Saranac Lake Christmas Bird Count held in early January. I have also encountered tooting birds during nocturnal cross country ski trips on bright, moonlit, winter nights. 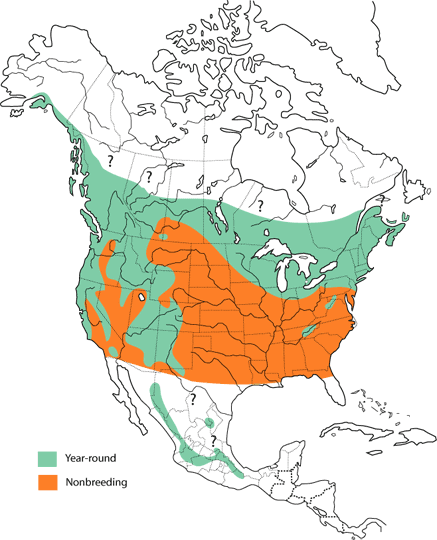 Like most songbird species, Northern Saw-whet Owls are nocturnal migrants. They join the remarkable, unseen river of birds flowing over us at night during October and November for their southward journey.

Project Owlnet was founded in 1994 to facilitate communication, cooperation and innovation among a rapidly growing network of hundreds of owl-migration researchers in North America and abroad. In 2013, Larry and Nancy Master, in partnership with Nina Schoch, bander, Common Loon researcher, and veterinarian, began nocturnal banding of Northern Saw-whet Owls at their Intervale Lowlands property, a private nature preserve in Lake Placid. Twenty nine Northern Saw-whet Owls were banded in 2013, about 1 per every hour that nets were up – at only one location in the Adirondacks! Much will be learned about Northern Saw-whet Owl migration as data is collected all across North America by members of Project Owlnet. 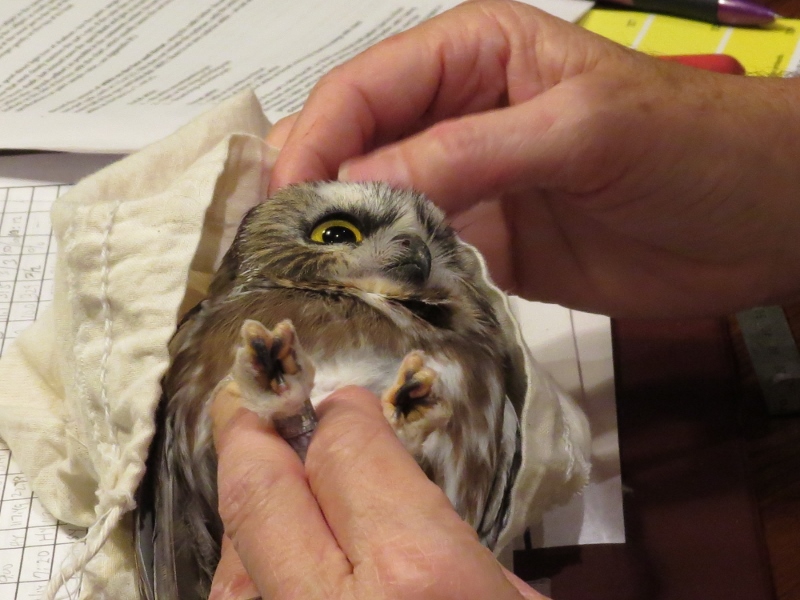 I recently joined Larry Master and Nina Schoch for Northern Saw-whet Owl banding on October 31 (Halloween) at Intervale Lowlands. Nets went up at 6 p.m. A male’s vocalizations are played to lure in these nocturnal migrants. The nets are regularly checked every 30 to 45 minutes. Banding usually ends around 10 p.m. 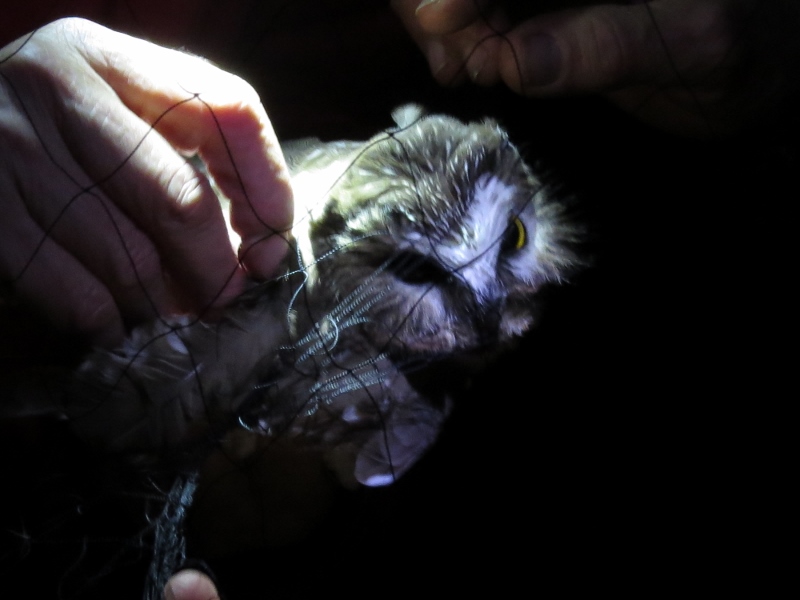 Once an owl is captured, Nina gently untangles it from the netting and places it in a cloth bag. 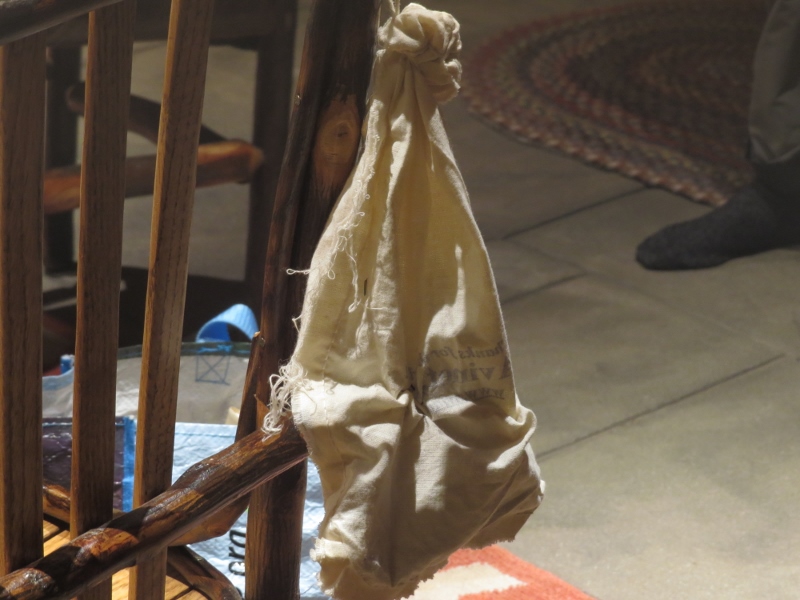 The little owl is taken inside where Nina takes a series of measurements, notes observations, and bands the owl before releasing it. 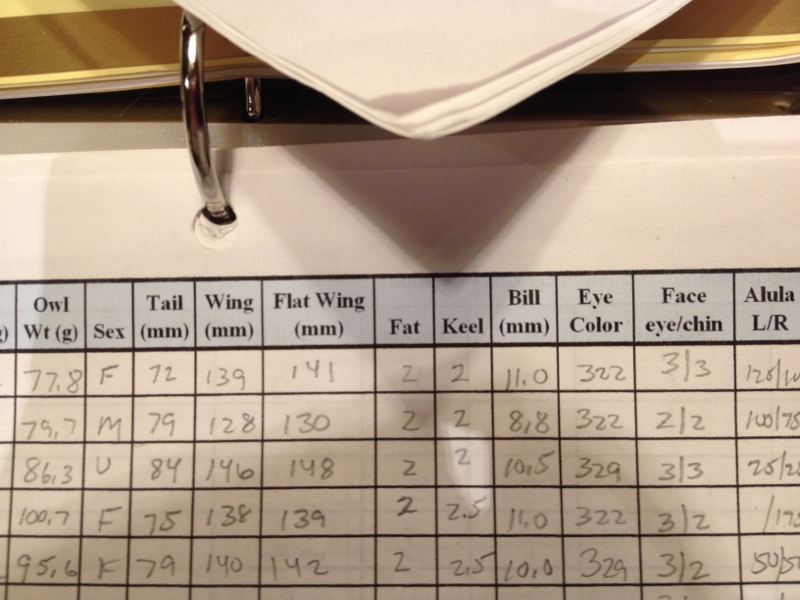 The owl is weighed in the bag and the weight of the bag is later subtracted. Male Northern Saw-whet Owls weigh only about as much as an American Robin. The larger females weigh about 25% more than males. 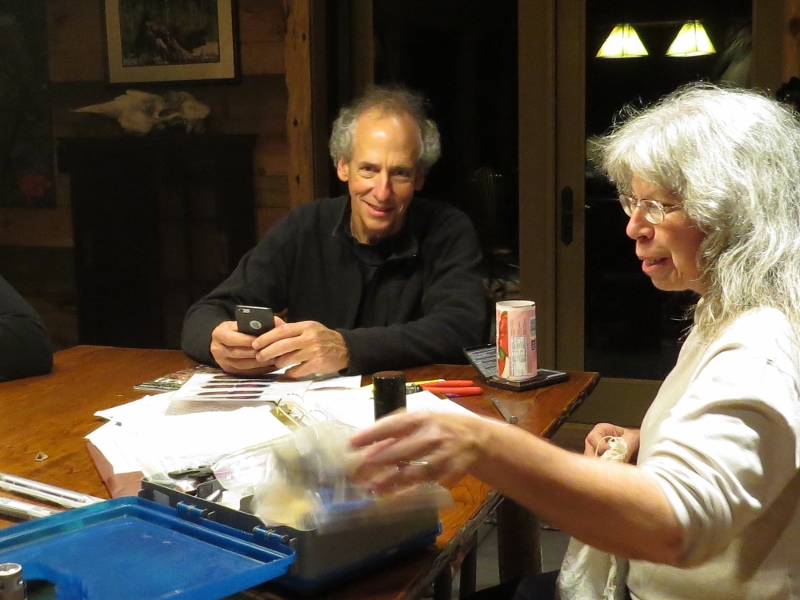 A lightweight metal band is placed loosely on the owl’s leg. The metal band has a unique serial number. All of the banding data is associated with this unique number. 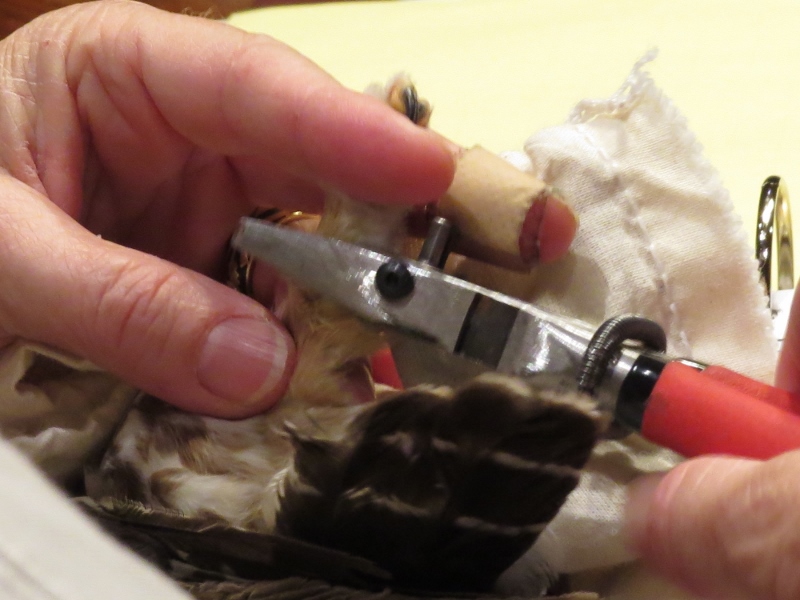 A yellow paint color chart is used to match the owl’s eye color. 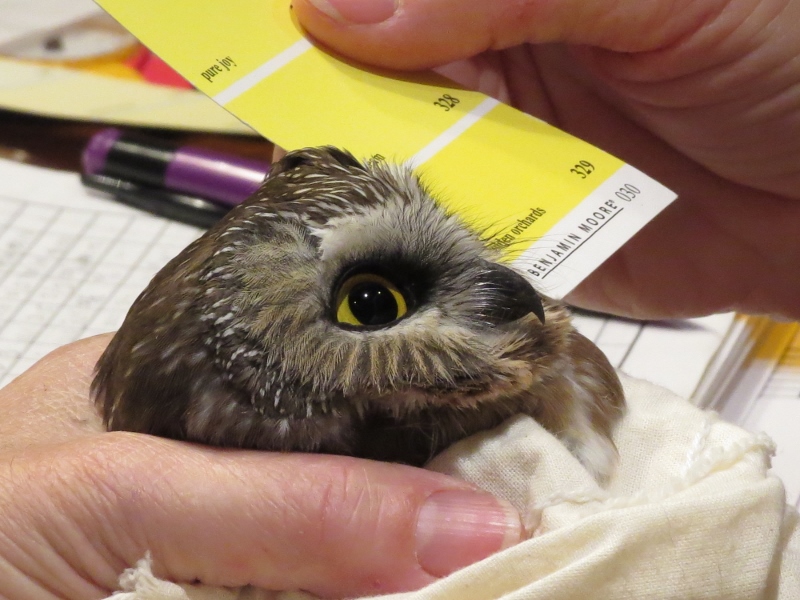 Wing length is measured, both natural and flattened. 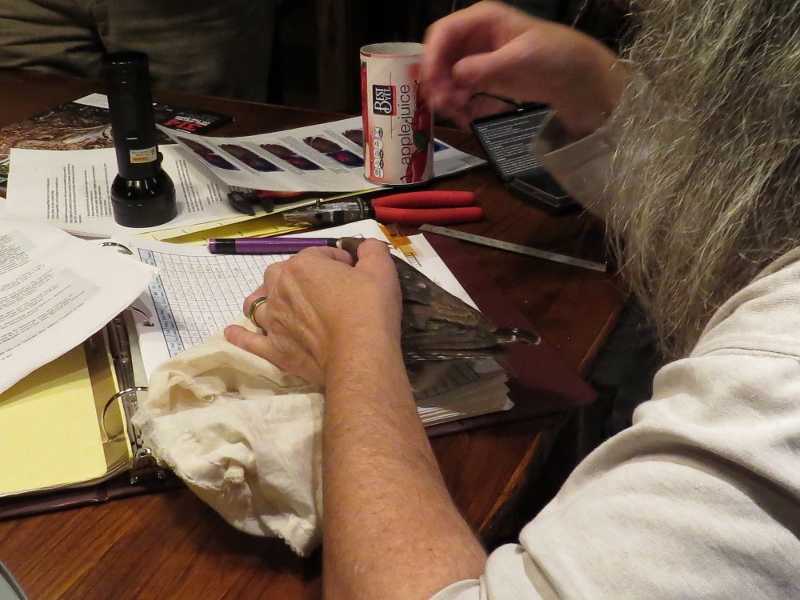 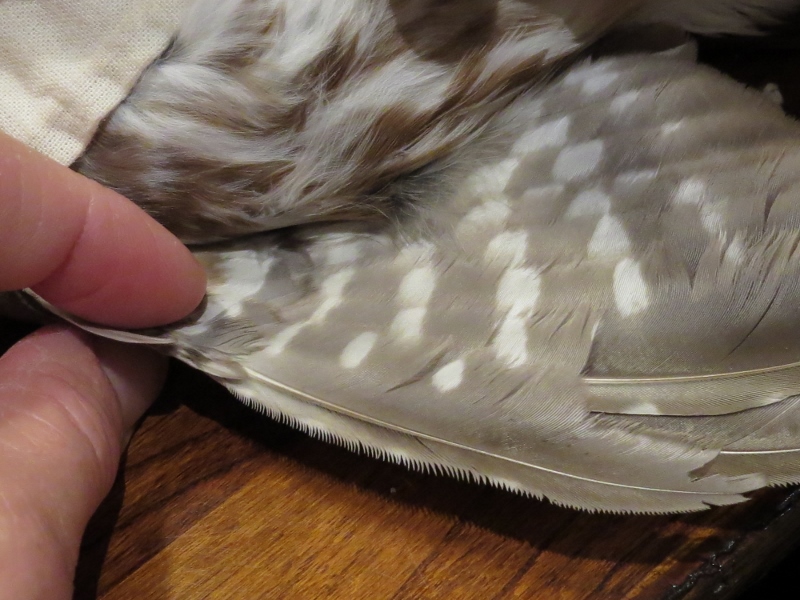 An ultra violet light is used to help determine the owl’s age. Newer feathers show up pink. The molt pattern of new and old feathers is used to determine age. The female owl below is a hatch year bird. 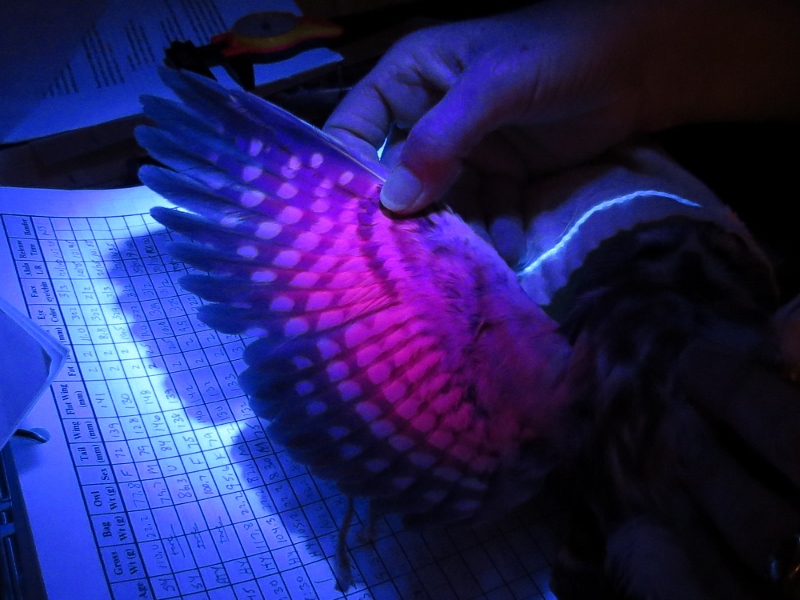 There is a featherless area of skin under the owl’s wing that is observed to determine fat deposits. These deposits show up as yellowish areas and the extent of the fat deposits is ranked on a scale from 1 to 5. 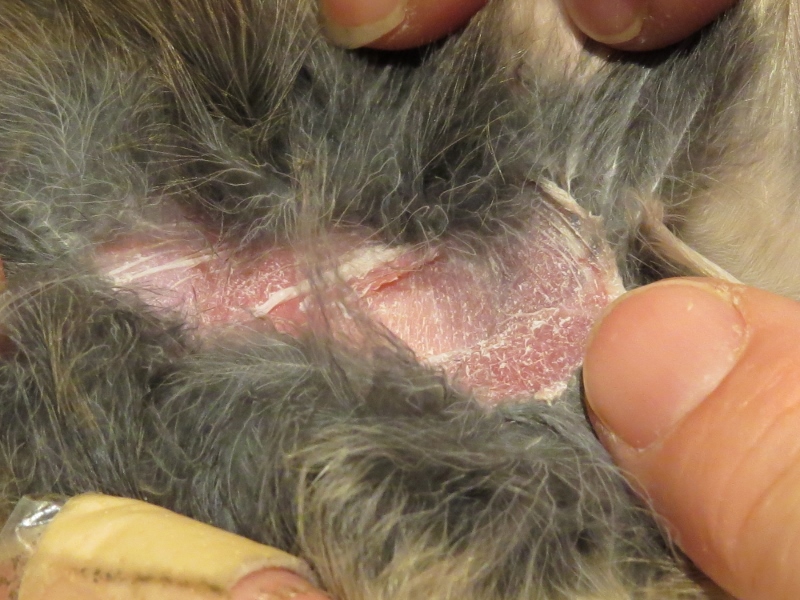 Other measurements taken include bill and tail length. Breast muscle mass on the owl’s keel is ranked from 1 to 5. 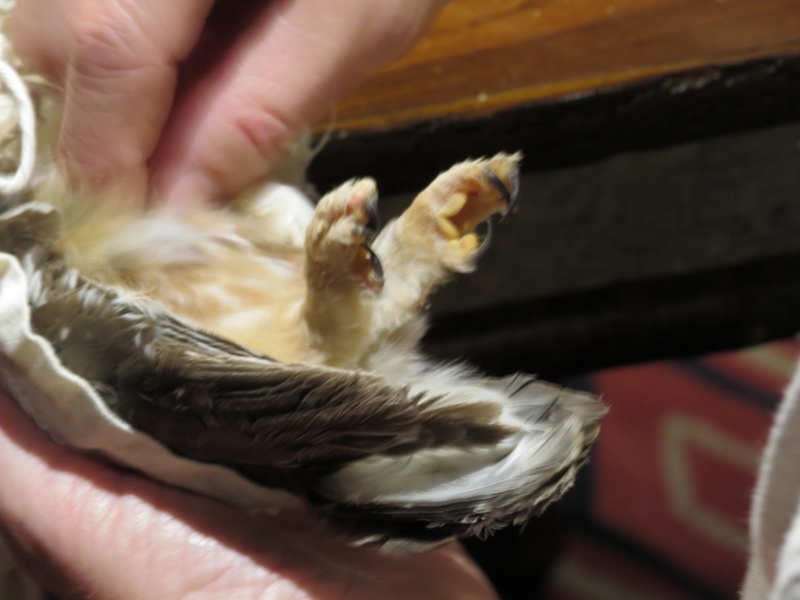 The amount of white feathers near the eye and on the chin is determined and separately ranked on a scale from 1 to 3. 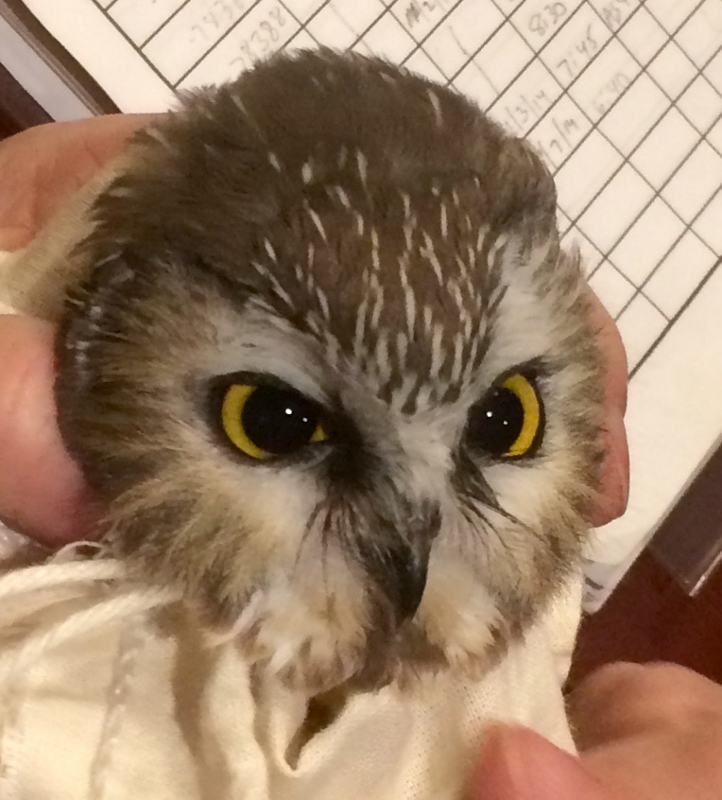 Release Back into the Dark Night!

The owl is quietly held outside for several minutes so its eyes can readjust to darkness. The first photo below shows a male Northern Saw-whet Owl being held before release. The second photo shows a female. 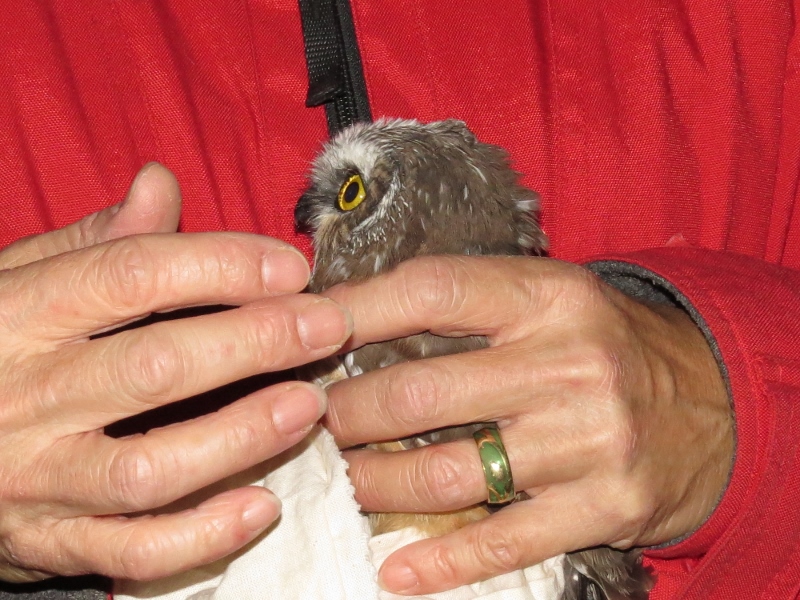 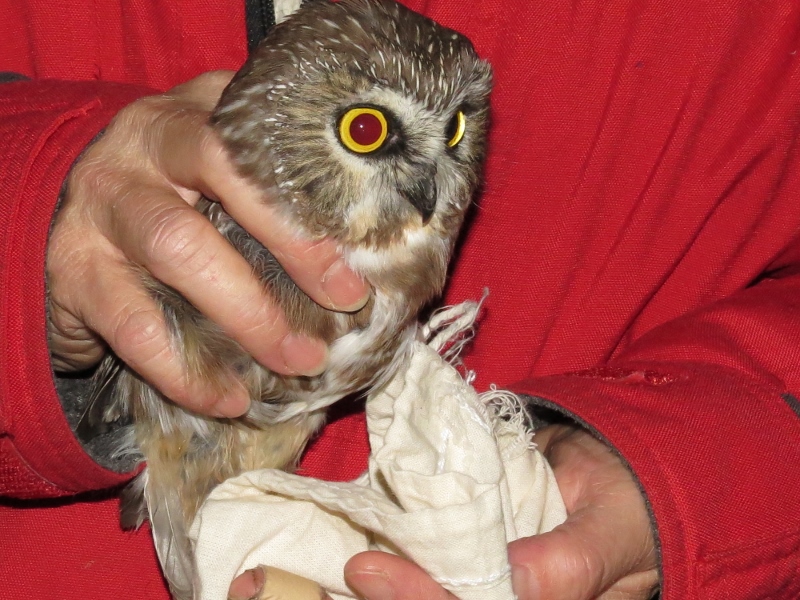 The owl is placed on the ground. They often look around for a few minutes before taking off. 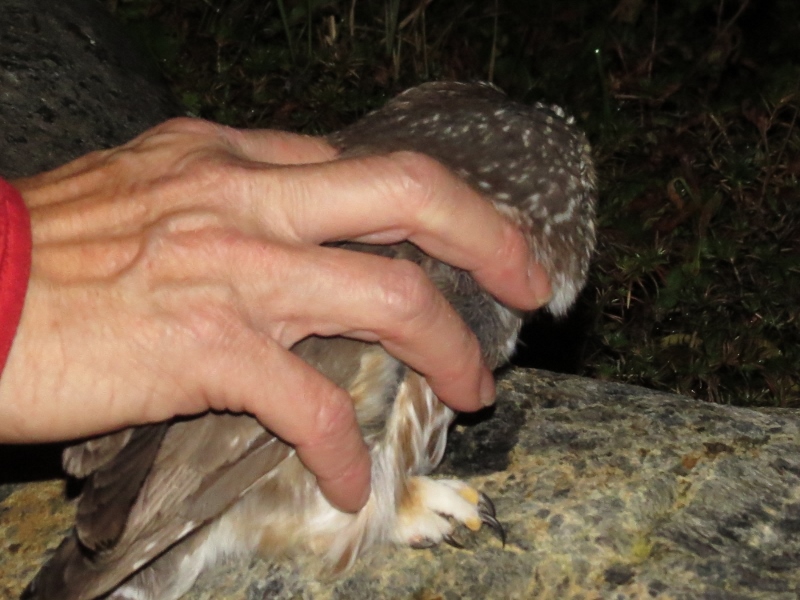 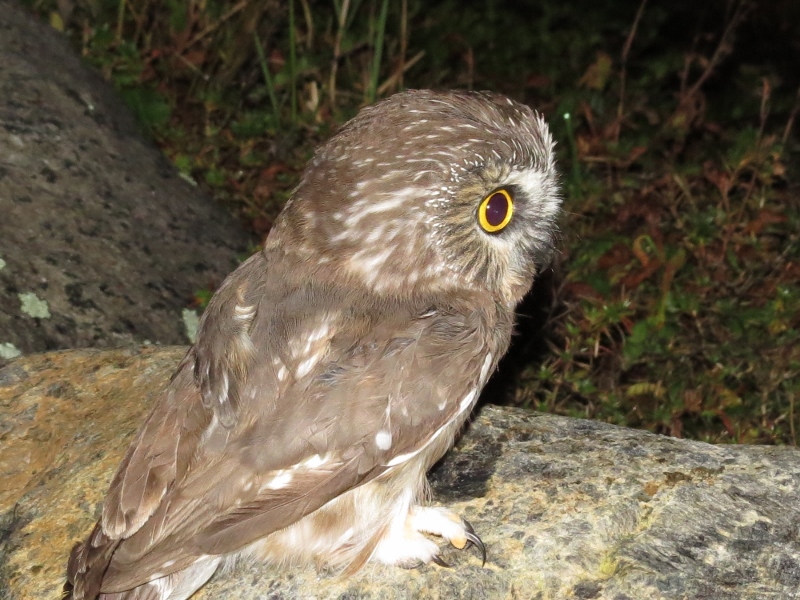 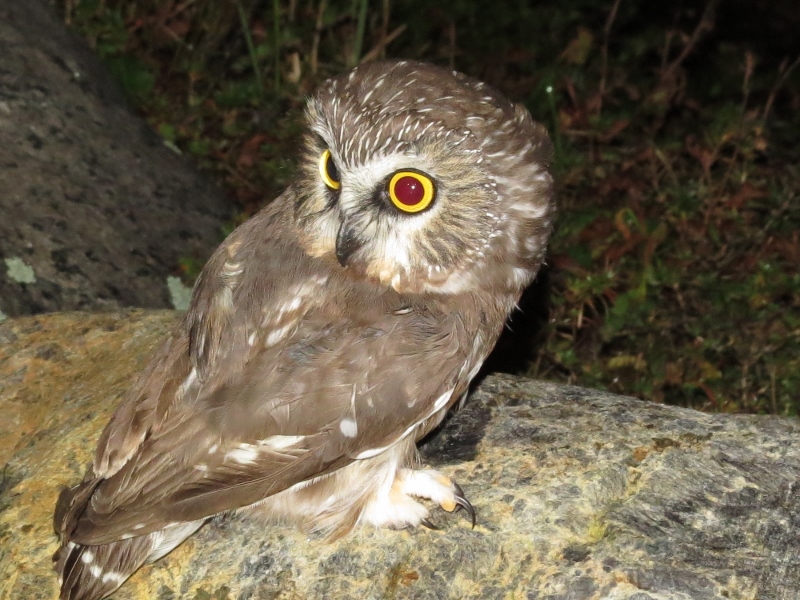 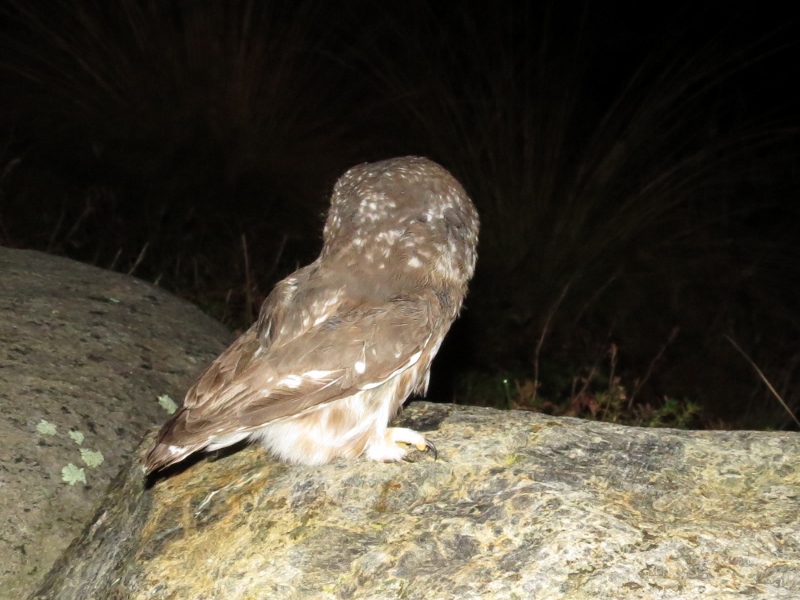 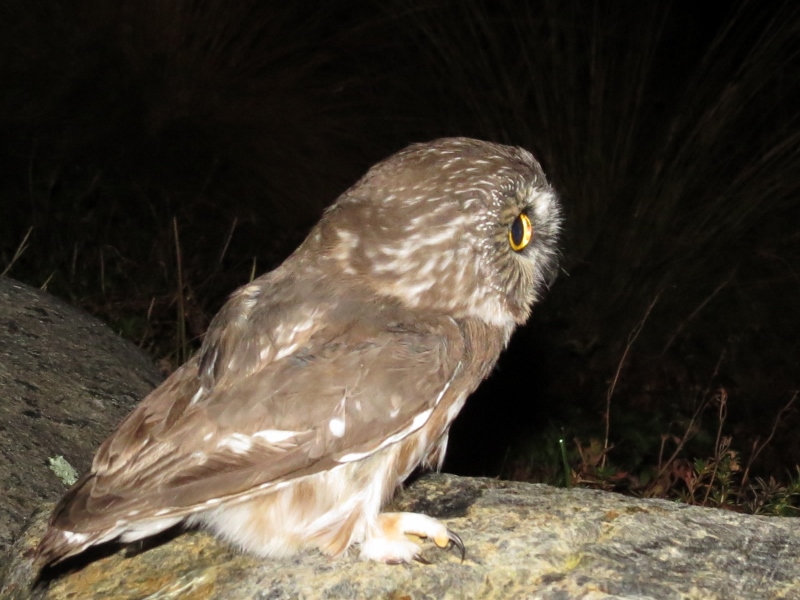 My Halloween spent with such small, adorable owls was quite exciting this year!

Listen for Northern Saw-whet Owls near water in the Adirondacks, along lakes, inlets and outlets of lakes, along brooks and rivers, and near bogs and swamps. It is quite special to hear the non-stop tooting of a vocalizing saw-whet owl, and even more exciting to actually see one! Up until Halloween, I have had only one view of this species when a Northern Saw-whet Owl showed up to hunt the small mammals in our wood pile under the porch for several nights last year.