As many of you know Lake Placid is a hub for hiking mountains of all sizes and trails of all abilities but what gets often forgotten is its close proximity to countless lakes, rivers and ponds. This week I decided I would explore paddling the waters at Axton Landing. Axton Landing as many hikers might recognize, by name, is the landing on the Raquette River that is passed as you drive down Coreys Road to explore the Seward Range. Many might not realize its significance to the paddling world and region this landing awards visitors.

This time of year the Raquette River and Stony Creek is well above the summer water line and in most cases looks like a floodplain, it essentially is. I see this place having a similar look of the Everglades in Florida, minus the crocodiles and funny looking trees. Our everglades are populated with large snapping turtles, trout and very attractive blossoming red maples.

This is a bit of a recap of our trip. We launched at the state boat launch area at Axton Landing. This rough, one-way road is all but friendly to smaller cars, but what an area to be leaving from. The water has dropped a bit over the last week or so, but it still is reaching up, almost to the user register. We had just purchased an Old Town Penobscot 17 foot canoe at the end of the season last year for a steal, this was our maiden voyage. We opted not to break a champagne bottle on the hull, the glass would just make a mess and what a horrible waste of perfectly good alcohol. The current wasn’t too bad and a nice solid breeze at our back was a nice assistance. As we paddled upstream along the Raquette River we quickly came to Stony Creek that enters on the left. Without a GPS or knowledge of the river this confluence of water could be hard to recognize. The bridge up stream on Coreys Road, along the brook, is a sure sign of its existence. We passed under the bridge which had plenty of head clearance for big guys like me; even in high water clearance wouldn’t be too much of an issue. 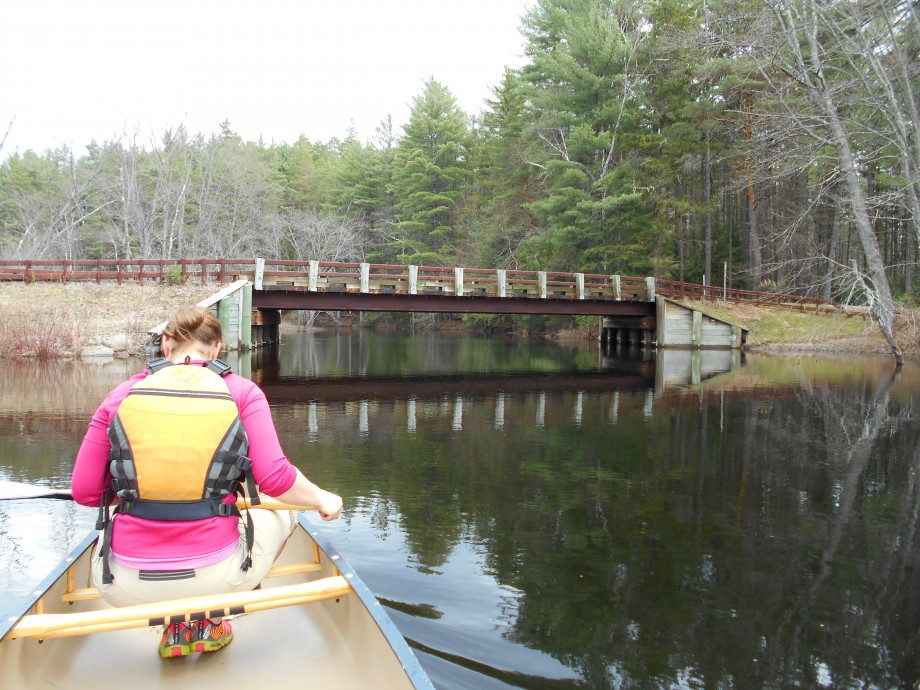 This is where the everglade type water course comes into play. Only this time of year does it show this look, so clearly. The brook, which typically meanders through the trees and small peninsulas with red maples and alders lining the edges, was now a massive waterway. The small peninsulas were now under water, as were most of the alders and several feet up the stem of the larger red maples. According to map on our GPS route, we were over land more than we were actually on the course of the creek. It didn’t really matter though; we knew the simple course, which was basically true north. The water over the flooded landscape was deep enough in all areas where we didn’t need to worry about running aground. 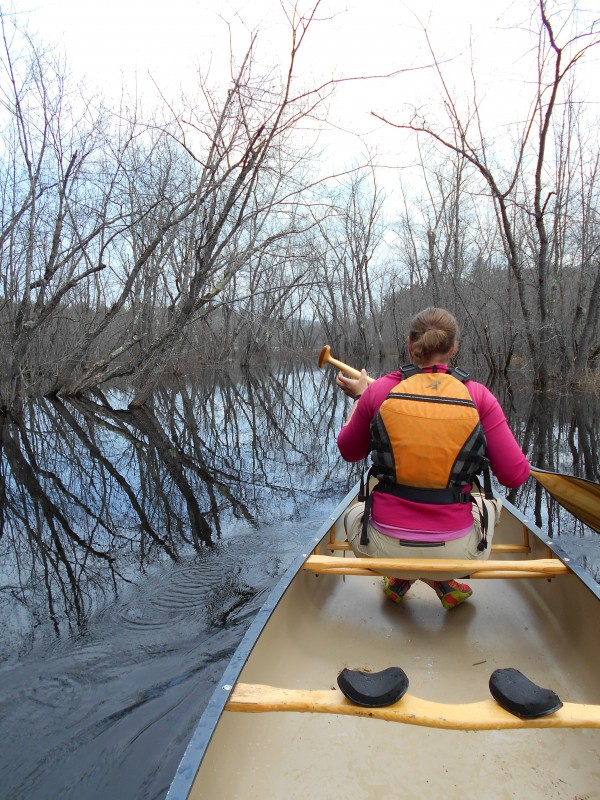 Wildlife and Birds of the Forest

South Stony Creek Pond in front and Stony Creek Mountain was on the horizon, we could see them through the trees. Once on the open water of the pond it was a much more thoughtless pursuit. We now could hear the frogs chiming in the weeds along shore and the chatter of the squirrels in the tree high above. On occasion we would hear the “peeee-weeeee” of the pee wee bird and the “teacher, teacher, teacher” of the oven bird. 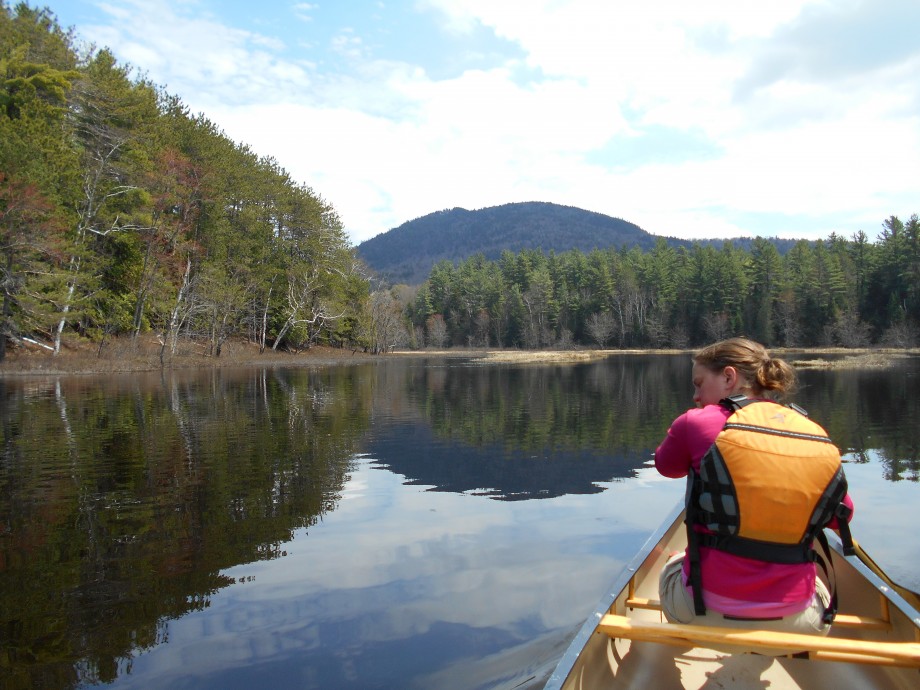 Up ahead we had yet another bridge to go under, this one much, much lower however. A private road expands the narrow and at this bridge we had to duck, quite low to go beneath, thank goodness for yoga. I thought of the airline stewardess saying, “In case of emergency place your head between your legs...” Soon we found ourselves out on open water and I had always wanted to visit the small round pond northeast of the main ponds. We made a steady line toward the inlet. The inlet was as wide as the creek, with red stem dogwood and other shrubbery poking up through the deep waters. We made it most of the way to the pond, actually to the pond, just not on it. A beaver dam stopped access, but a short carry up and over the dam was an easy remedy; we just opted for lunch instead. Some cheddar cheese, an apple, crackers and a Saranac IPA was just what the doctor ordered, even though we didn’t officially have a prescription on us. 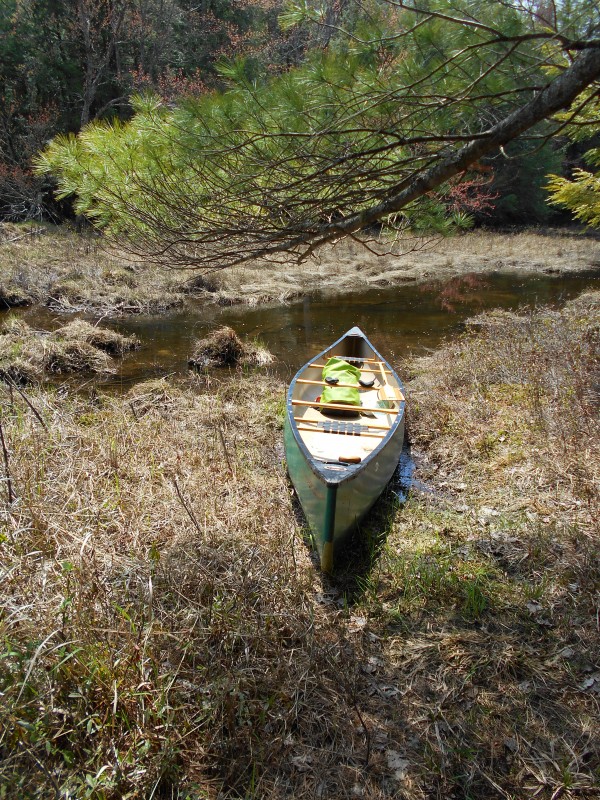 The paddle back was a bit easier, first of all it was downstream and secondly, the navigation was a bit easier since we knew where we went. Corenne asked me about a trail she saw on her GPS that she was unfamiliar with so I decided we should go ashore so she could see where it started. This trail is a dead end trail that leads through the woods for about 1.5 miles to Ampersand Brook, not seen on many maps and not really even maintained. We passed back under the bridge on Coreys Road and paddled to shore. Corenne got out and the next thing I remember I was sitting in 3-feet of water as she dumped me in. On purpose? I may never know. On a bright note, the water is warming up rather quickly and actually felt a bit refreshing after paddling in the sun for several hours, but I won’t tell her that.

Back at Axton Landing we ended our day, slightly reddened by the sun, but surprisingly enough not eaten up by black flies. In my garden they are ferocious, on the water with a nice light breeze, they were nonexistent.

This is just one of the amazing paddles within a short distance of Main Street Lake Placid, there are so many more. Consider a nice relaxing, quiet; wildlife filled paddled this upcoming Memorial Day weekend. Interest? Need a boat? Want a guide? Lake Placid has boat rentals, guidebooks and maps at one of our

local gear shops and guides to get you there. Paddling works up a thirst, need a bit of nightlife afterwards? Lake Placid has pubs and live music for you to enjoy as well. 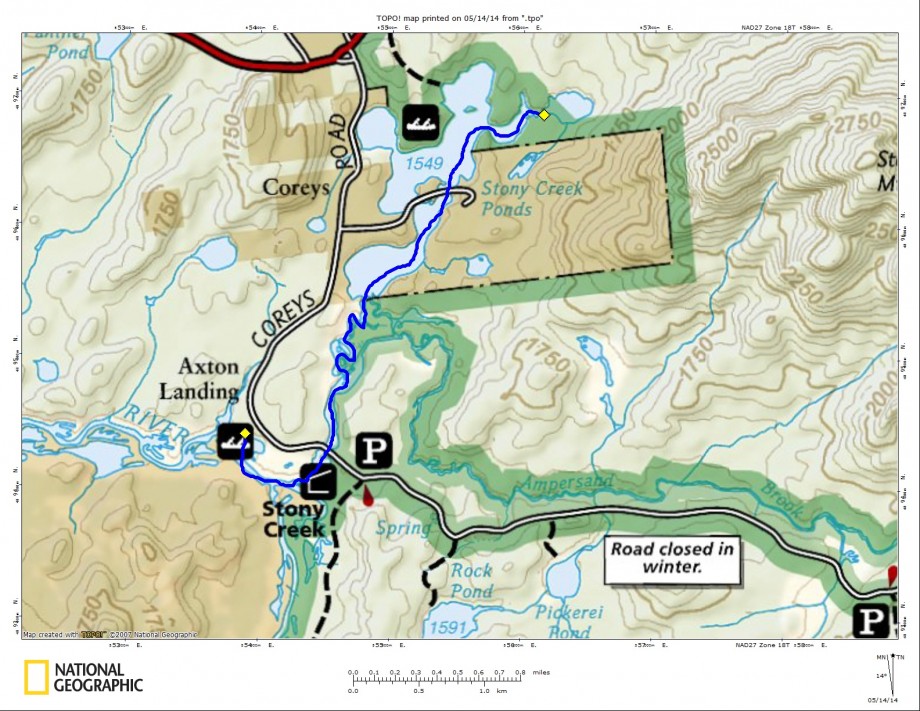