I had a few guests in town this Thanksgiving holiday and I took them to see the Gray Jays along the north end of the Bloomingdale Bog Trail.  It is the best place to find Gray Jays in the Adirondacks and the region.  It was a cold day and the trail was quiet as we walked south toward the power lines where the jays are usually found.

As we approached the makeshift feeder which folks have constructed there, we saw a lot of bird activity.  Black-capped Chickadees and Blue Jays buzzed to and from the feeder into which someone had poured some sunflower seeds.  As we walked closer the Blue Jays began to scatter, but we were almost instantly surrounded by Gray Jays.  The jays have grown accustomed to dog walkers feeding them and they often follow Wren and me along the trail as a result.  We stood there taking photos as a contingent of Gray Jays came and went around the feeder.  There were probably about a dozen birds.  Their body and wings are slightly longer than those of the more familiar Blue Jay, but on average they are a little lighter in weight thanks to their fluffy plumage designed to withstand the cold winters of northern latitudes. 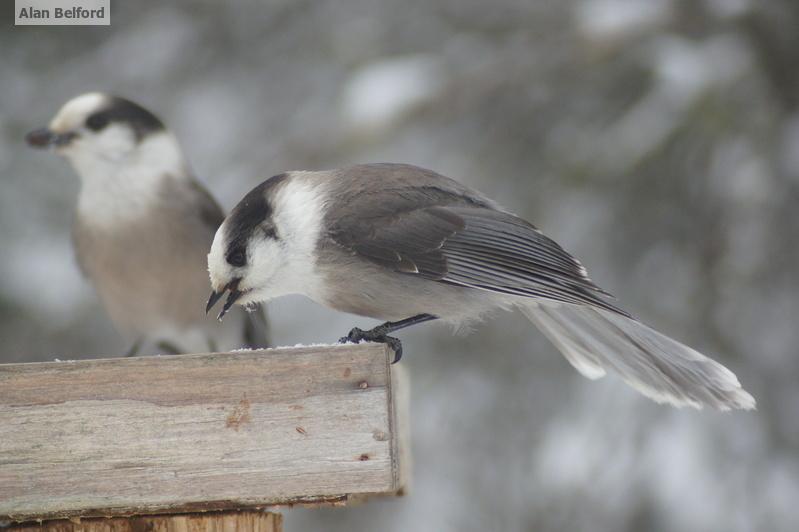 Gray Jays remain in small family groups for much of the year and so I figured there were about three family groups present near the feeder.  The birds chased each other from the food, filled their crops and raced away to cache what they could.  All members of the corvid family (jays, crows, ravens, and magpies) cache food and the Gray Jay can even produce sticky saliva to adhere food to trees above the snow line – if they simply buried their food it could become covered as winter advanced.  As we watched them coming and going the jays made constant soft calls as they hopped and flew from tree to tree.  They were very fun to observe – as they always are.

Boreal Species of Our Region

After all, Gray Jays are an Adirondack boreal specialty species and one which draws many birders to the region.  They are found in medium aged to mature boreal forests, which in our region generally means they are restricted to boggy habitats such as Bloomingdale Bog, Massawepie Mire, Spring Pond Bog, and others with similar ecosystems.  They can also be found in sub-alpine forest, particularly in the American West where their range spreads along the spine of mountain ranges such as the Rockies and Cascades.  They are widespread across much of Canada through Alaska and have earned the name Canada Jay as a result.  In fact their scientific species name is canadensis. 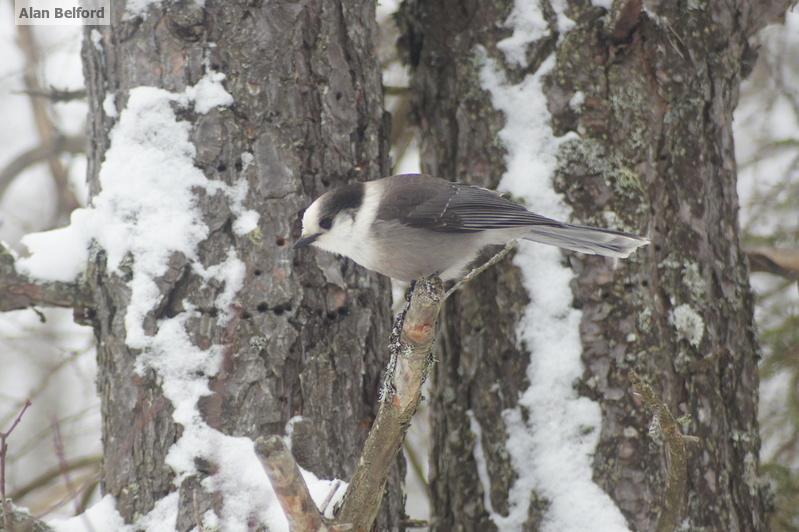 Like many members of the corvid family, the Gray Jay is intelligent and has learned to find food from people.  As a result they are common visitors to campsites as they search for unwanted and unguarded vittles, sometimes earning the name Camp Robber.  They are also regular visitors to feeders in areas where they are common. The jays in Bloomingdale Bog are no different; it is one of the attractions of many folks to this bird.  And while it is generally not in the best interest of many species of wildlife to be given handouts from people, the jays appear to be doing well with the regular attention they garner.  They are a real treat to watch and Wren and I will be going back regularly to see them throughout the winter.