The discovery of a rare bird has a way of mobilizing and motivating birders to travel.  How far they will travel generally depends on the bird’s rarity in the region and the likelihood of finding it.  Some good birds are found briefly for one day and never seen in the area again making them less worth the effort.  But the draw of potentially finding a rare bird is strong for many birders – even if the odds of rediscovering it are low.  After all, it is always exciting and fun to find a species which is uncommon in a given area – or more thrilling yet, a species that a birder has never seen before, a lifer.

As such the pursuit of such birds and the interest they garner varies greatly according to their rarity.  Birders travel regularly to our region to find non-migratory boreal species such as Black-backed Woodpecker, Gray Jay, and Boreal Chickadee since this region offers great opportunities to find these sought after birds.  They aren’t necessarily rare here, but birders do have to hunt for them and the Adirondacks offer the closest location for birders in places like Boston or Philadelphia to find them.

And birders are constantly checking on-line posts to see what has been seen of interest.  Locally we often note both Adirondack specialty boreal birds as well as uncommon species which pass through the area.  And so birds which are uncommon but regular in the region, such as Short-eared Owls or Little Gulls in the Champlain Valley, may have local birders looking for them, but won’t likely draw a lot of attention from birders outside the region.  Those birders may be able to find those species closer to home.  But when a mega-rarity species shows up the birding world goes all, well… atwitter.

Such was the case with the Ross’s Gull which was found in Chambly, Quebec (southeast of Montreal) almost two weeks ago.  Car trouble had kept me from going birding that day when I noticed the first report.  I was quickly on the phone with a friend and we had to wait two days of lousy weather and wondering if it would stick around before we could head up with another friend to look for it. Since Ross’s Gulls are arctic species which rarely show up very far south, this bird was BIG news.  After all, there are always a handful of breeding pairs around Churchill, Manitoba, but even traveling there offers no guarantees of finding them (I talked with someone who had traveled to Churchill five different times and didn’t see the gull!).  As a result, for many birders a Ross’s Gull is a once in a lifetime species. 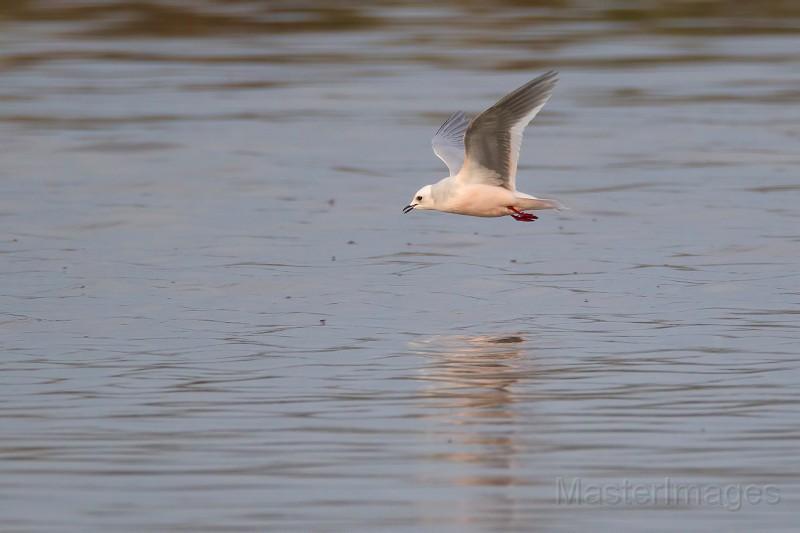 We traveled up to Quebec early to maximize our chances in finding the bird and began to work and scan around the marina, fort, and edge of the lake where it had been seen.  It was a cold, and extremely windy day and we stood for hours braced against the chill.  Nothing.  We went around the lake in the car to help us warm up and saw a variety of ducks, but no gull.  We returned to the fort where it had been most consistently found and waited in the cold, chatting with other birders, the numbers of which were growing. Our friend who lives near Ottawa arrived and started scanning with us.  There were also birders from Vermont, New Jersey, New Hampshire, and elsewhere.  In all there were perhaps forty birders lined up along the wall of the fort all searching intently as the concern of the late day shadows began to grow in everyone’s mind.

And then my friend from Ottawa called out the words everyone wanted to hear, “I’m on the bird!”  Panic ensued and I and another birder with whom we were chatting found the gull as well.  The crowd was filled with nervous excitement and we unleashed a cacophony of directions to everyone else to help them find the Ross’s amidst the Bonaparte’s Gulls and other gulls on the water.  I jumped off my scope to let my friend see the bird as I helped a few other folks with their scopes in locating the gull; they were feeling the pressure that it might fly before they found it.  Thankfully the Ross’s stayed long enough for us to have nice views of it, and everyone – to my knowledge – was able to see it.  It eventually raced away across the lake as it was growing dark and we had a happy ride home.

A few days later I noted that local Quebec birders had discovered where the gull was going during most of the day when it couldn’t be found at the fort or the lake.  It was frequenting sewage ponds where many of the Bonaparte’s Gulls feed and the first pond was giving birders closer looks than the views at the lake.  Again I was on the phone with my friend.  Birds this rare deserve a second look and when a friend of ours who had been out of town wanted to go see the gull when we returned home we jumped at the chance.

This time we had an easy time in finding the bird, and saw its pink blush in great light with a soft sun at our backs.  We stood for a few hours watching and photographing it as it came into the first sewage pond before disappearing for stretches to feed on the ponds which were out of sight.  And again, there was an entourage of birders to welcome it each time it returned. 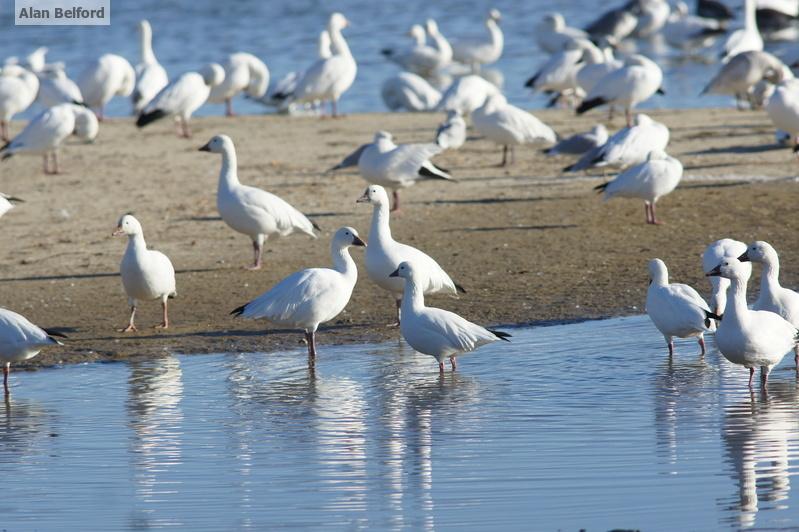 As we drove home we decided to stop in at Point AuRoche to find a Ross’s Goose in an attempt to find two Ross’s species I one day.  I had seen a few Ross’s Geese there a couple weeks earlier so I thought our chances were good.  But we soon discovered that the large flocks of Snow Geese with which the Ross’s associate were far out in the fields and a cold pelting rain began to fall as we arrived to look at them.  We tried for a spell to view the nearest birds, but had to give up the search.  Locally uncommon species can still prove difficult to find even if you saw a mega-rarity that day.

All the same we were still happy with our success for the day and began to discuss how long the Ross’s Gull might stick around.  With winter and cold fronts coming, it will likely eventually leave the area, perhaps when the Bonaparte’s Gulls clear out as fall continues its march toward winter.  That puts pressure on birders wanting to see it – they can’t wait since it is uncertain how long it will stay.  At this writing the bird is still being reliably seen daily, but some birders have still had difficulty in finding it and some have traveled a long way to miss it.  There are, after all, no guarantees.

When the bird does move on, there will be some interest in where it moves to.  Chambly sits along the Richelieu River which flows north from Lake Champlain, so there is the chance that this bird could follow the river with the Bonaparte’s Gulls into Lake Champlain if it gets pushed by a cold front or freezing waters.  And if that happens you can bet there will be a crew of birders out there searching for it.