I’ve seen three North American (also called Northern) River Otters a few times recently when I’ve walked Wren at Lake Colby in Saranac Lake.  The otters have been quite curious and yet wary of us and Wren has been intrigued watching them (partly because the one was making snorting noises) as they came to the surface, popping their heads out to look at us and then dived beneath the water again.

Generally when a few otters are found together it is a mother with her pups, in this case fully grow pups.  The pups stay with the mother until the following spring when she’ll have another litter.  Then she’ll mate almost immediately after having her next litter, but implantation of the embryos will be delayed 8 to 9 months. 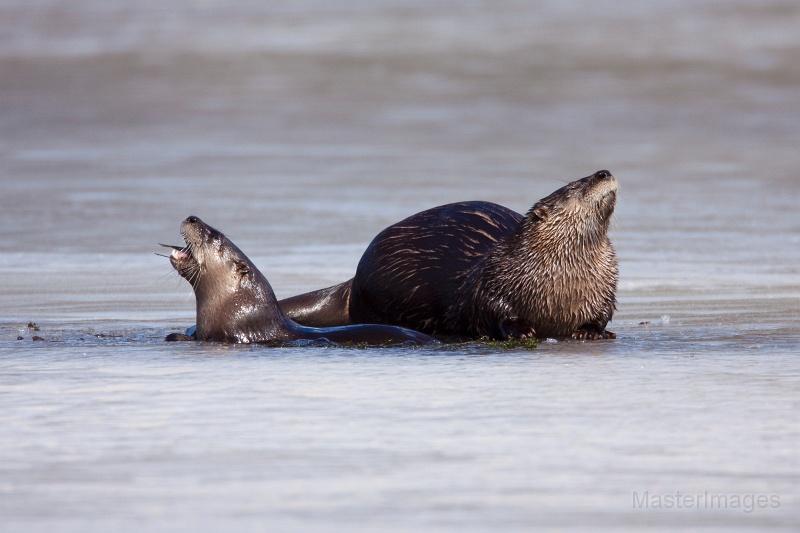 Although not often observed, otters are common in the lakes and streams of the Adirondacks.  They are well known for their playful demeanor and anyone who has visited The Wild Center in Tupper Lake can attest to how much fun they are to watch.  Playfulness aside, they are excellent hunters and the play of the young certainly helps train them for the serious mission of finding food later in life.  Otters eat a wide variety of food in their carnivorous diet including fish (often bullheads or suckers), crayfish, shellfish, and other aquatic invertebrates, as well as frogs and other amphibians and reptiles.  Like all predators they must be opportunistic and will eat small mammals or birds if they can catch them.  Mothers will often catch fish and crayfish and release them near their young in order to teach them to hunt.

Otters generally modify the dens of other mammals and will use old beaver lodges, upturned roots, or ledges, and these dens often have underwater entrances.  Otters also use toilets which help serve them as scent posts within their territory, and these toilets are in turn useful to researchers who study or survey otters.

Their webbed feet and powerful tail make them agile swimmers and they are covered with thick fur which keeps them warm in the coldest of waters.  This helps allow otters to be active all winter when they use and maintain holes in the ice.  In fact, they are often easiest to observe during the winter as their dark brown fur contrasts with the white world around them as they sit on the ice grooming in the sun. 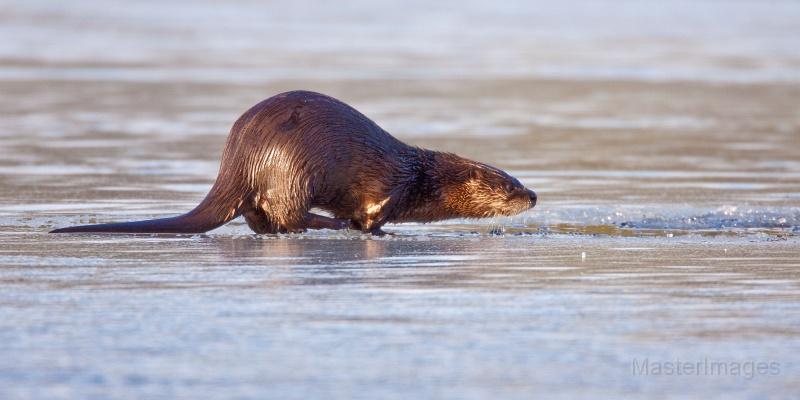 The same dense fur which keeps otters warm almost was their undoing.  Over trapping and harvesting of otters has pushed them out of much of their former range, but as conservation measures and our understanding of otters have improved, their numbers have rebounded in many places.  In fact, otters have been successfully reintroduced into several states and the population of otters in the Adirondacks served as the donor population for a reintroduction project in Central and Western New York State better than ten years ago.  The Department of Environmental Conservation continues to monitor the progress of that reintroduction.

Much of this monitoring involves finding signs of otters in the snow and mud. These signs are often found near water, but otters travel quite well over land when they move to a new waterway or drainage.  This is particularly true during the winter when otters slide on the snow, leaving characteristic skid marks in the snow as they do.  They can often travel efficiently in this manner alternating slides with jumps and bounds as they travel.  And while sliding may be an efficient means of travel it only adds to the persona of this playful animal.  They are always fun to observe and I’ll be looking to see if I can find that mother and her pups again soon.