As October leaves fall with passing cold fronts, it is time to head out at night to look and listen for northern saw-whet owls.  Saw-whets are small (about 8 inches long) owls, and the smallest owl in our region.  They migrate north in the early spring to breed in the Adirondacks and to our north, and then they migrate back through our region during the middle of the fall.  And the first few weeks of October are the best time to find them.  And while the owls are more vocal during the spring because they are beginning their breeding season, they will call during their southbound journey and will also respond to recordings or to a person making their tooting calls by mouth.

Beginning last fall, the Intervale Lowlands Preserve in Lake Placid started banding migrating saw-whet owls as part of a wide ranging effort to learn more about the owls.  A licensed owl bander processes all the birds while the rest of us watch the process, helping and learning as we go.  And there is a lot to learn from capturing an owl.  Measurements, health, age, sex, etc are all recorded and the resulting data will be entered into a central data base.  The bird is given a band with a unique number in case it is recaptured someplace else and it is then released.  The data can then be useful in studies concerning their movements, demographics, populations, etc. 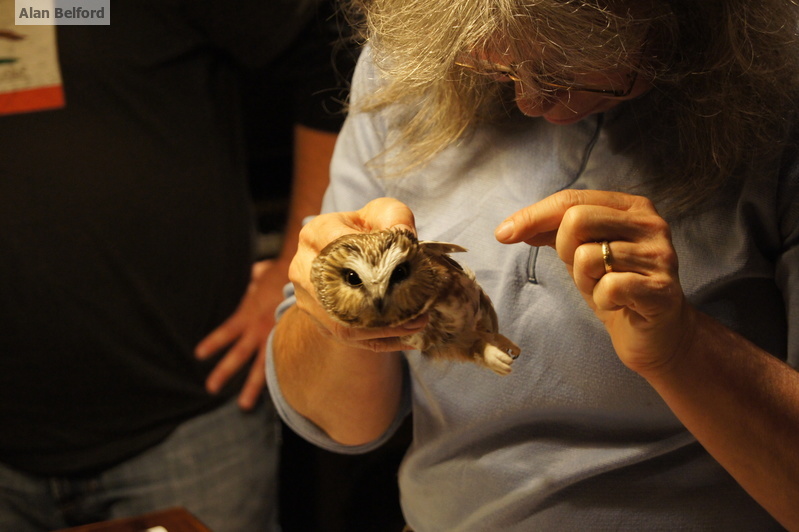 Last week I was at Intervale and we caught five owls – using mist nets with a recording of saw-whet calls to lure them in.  The nets were checked regularly so that no birds were left in the nets for too long and we found two birds on the first net run.  The second net run yielded another two, and the third and final run, a single owl.

A few days later we banded owls again, catching three birds.  We also managed to accidentally catch a flying squirrel in the net which we removed and released.  A few other owls sat a short distance off in the woods calling and responding to the recording we were using as a lure.  As we were checking the nets we heard the tooting of one owl not far away and it then gave a couple squeals – one of my favorite calls to hear.  We walked up towards it in the dark and it kept calling despite our presence – the recording had its attention.  But it was too smart for the nets and we never did catch it. 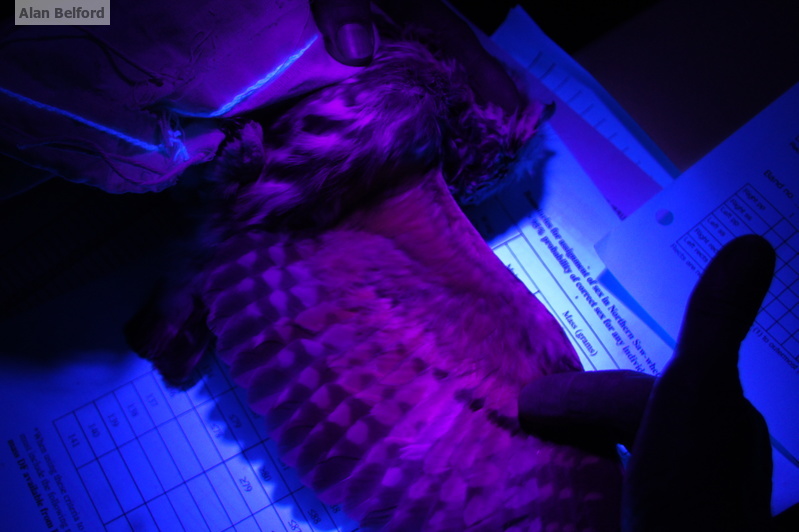 Just last night we went out again, but southerly winds allowed us to net only one owl.  But as we were taking down the nets at the end of the night, a saw-whet flew in and perched just feet from a member of our crew, realized its mistake, and took off again.

And while you need permits to catch, handle, and band owls, anyone can go out and look for them in the woods.  Saw-whets breed in the region, but with so many moving through the area during the fall, now is a great time of year to go look for them.  You can look for them roosting low in conifers during the day, but the easiest way to find them is to call to them but making their whistled tooting calls.  I’ve even been calling in my yard at night just to see if I can get lucky.  Perhaps some of the success we’ve had with banding the little owls will rub off for me.  We’ll be out a few more times this season to see how many more we can find.