In the constantly changing world of songbird migration, seemingly anything can happen.  And yesterday offered an exciting example of those possibilities.  I was writing on my deck when I heard the chatter of chickadees which I tried hard to ignore so that I could get my work done.  The chatter soon moved closer and was joined by American goldfinches – not something I’m concerned about.  I kept my head down and kept writing.

The chickadees slowly move closer and I eventually heard a few chips from warblers.  Again, I tried to ignore them.  But I started to peek up in the trees and began to see warblers flipping around in the branches.  Soon there were more.  And more.  There was no longer any fighting it.  My focus was shot and my work efforts defeated.  I had to check them out. 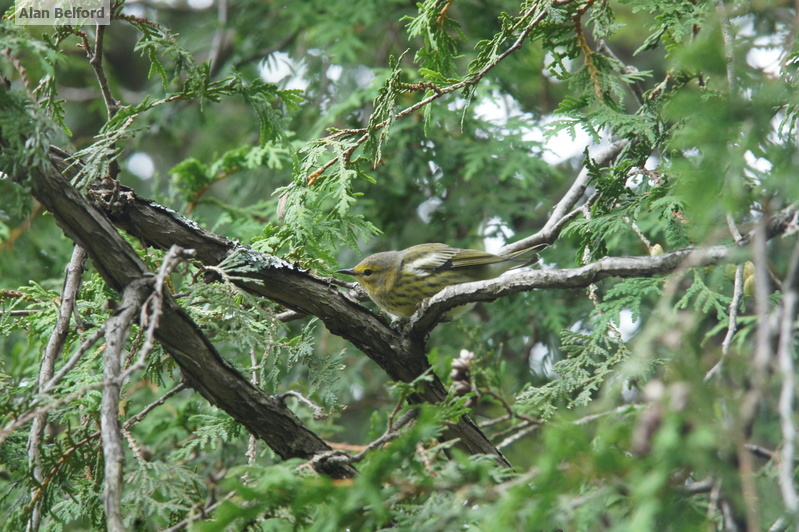 I generally work with my binoculars – and often my camera – at my side, but I was trying to be focused.  So inside I went to grab my things.  I emerged to a nice collection of birds in the yard, and set to work identifying them, hoping some would come in close for a photo.  I was soon tallying a list of warblers.  Yellow-rumped, black-throated green, Cape May (which I had seen in my yard for 5 straight days), and northern parula began my list.  But the trickle of birds was soon becoming a wave, and in no time, I added magnolia, blackburnian, more Cape Mays (there were 6 or 7), black and white, and chestnut-sided.  All of these were mixed in with chickadees, juncos, white-throated sparrows, downy and hairy woodpeckers, red-breasted nuthatches, and red-eyed vireos.  In fact I found better than 30 species of birds in my yard during the hour the flock stayed with me.

But it was the warblers that had me most excited.  Not only was I finding a nice diversity, there were multiple individuals of most of the species.  There were 5-6 black-throated green.  There were about as many northern parula, magnolia, and so on.  They were dripping from the trees!  And others were arriving.  As I stood on my deck I found a male Wilson’s warbler, a Tennessee warbler, and a blackpoll warbler.  I walked down to the front of the yard along the road to get a look at the birds on the back side of the trees and across the street.  Amidst all the yellow-rumps, Cape Mays, and others I found a yellow and a Nashville warbler.  My list was growing.  Soon I found two bay-breasted warblers - a northern species which is generally only found here on migration, although they have nested in the area on occasion. 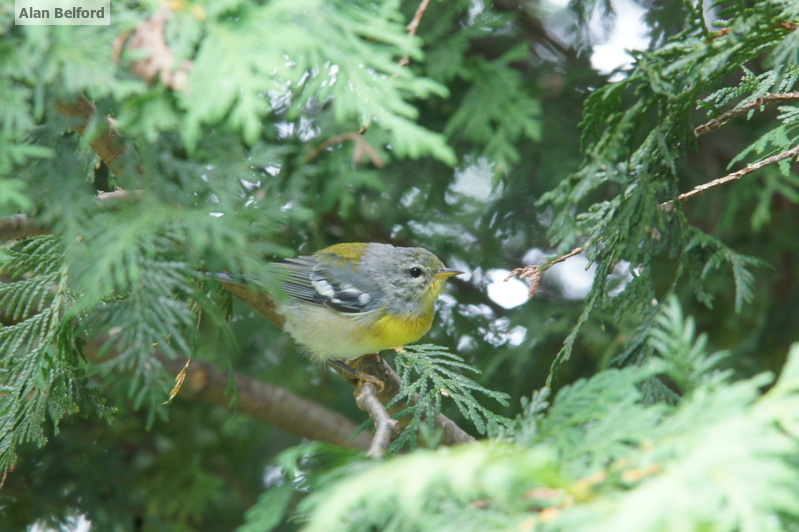 Right about then the sky, which had been so heavy with potential rain, lost its battle to hold its water and it began to sprinkle.  I stayed at it with the birds – drippy days like that during migration are often the best.  Finally the rain opened up and it was hard to see anything.  It was only then that I remembered that I had left my bags, books, and notebooks on the deck and they were getting wet!  Thankfully I didn’t have my computer outside!  I grabbed my things and stepped inside, watching from the window.  A friend called me at that moment to chat about birds in Lake Placid, and after exciting telling him what I had and hanging up, I saw a Canada warbler from the window.

As the rain slowed I headed back out, searching through the flock and attempting photos.  Little by little things quieted down and suddenly – poof!  The warblers were gone.  They had moved on across the street and through the woods.  I provided a little chase, but soon the trees stood still.

Such is the way with warbler waves.  They sweep you up, you can ride them for a while, and then they leave you stranded looking at empty trees and wondering where they all magically disappeared.  You get so focused on a few birds that you often don’t notice that the wave is moving on to crash on another shore.  As such, warbler waves are a lesson in seizing the moment and in being ready for it when it comes.  I stood with mouth agape looking at the trees.  I had just seen 15 species of warblers in my yard in the space of less than an hour.  I stood for a few minutes unmoved, wanting it to start all over again as I caught my mental breath from the excitement.  I didn’t want to stop, but they were gone.  I hesitated, contemplating the once excited trees.  I waited.  I paused.  But it was time to get some work done – in my wet notebook.