I went for a hike at the Intervale Lowlands Preserve in Lake Placid on the weekend with a couple friends.  We were mostly looking for birds, but Intervale offers the additional benefit of some great views of the Sentinels, the High Peaks, and Whiteface.  The walking at Intervale is relatively flat and easy too, which is great for me since I’ve been dealing with ongoing sickness and fatigue over the past number of months.

And for those of us who enjoy birding, there is always plenty to see.  As we drove in, an osprey flew overhead and American kestrels hunted above the fields which border the AuSable River.  We began our walk and we worked along the river’s brushy edge in search of songbirds.  We immediately began to find some.  Gray catbirds, common yellowthroats, song sparrows, dark-eyed juncos, and other breeding birds were still at the preserve, but we were slow to find many birds on migration.  As we reached the large south field, bobolinks flew overhead giving their characteristic bink! call.  They were using the field as a stopover on their way south.  We stood and listened, looking for more bobolinks as we admired the great view of the Sentinel Range – even with the overcast skies - from the field.  Shortly thereafter a sharp-shinned hawk cruised over the field, frightening the songbirds to be quiet. 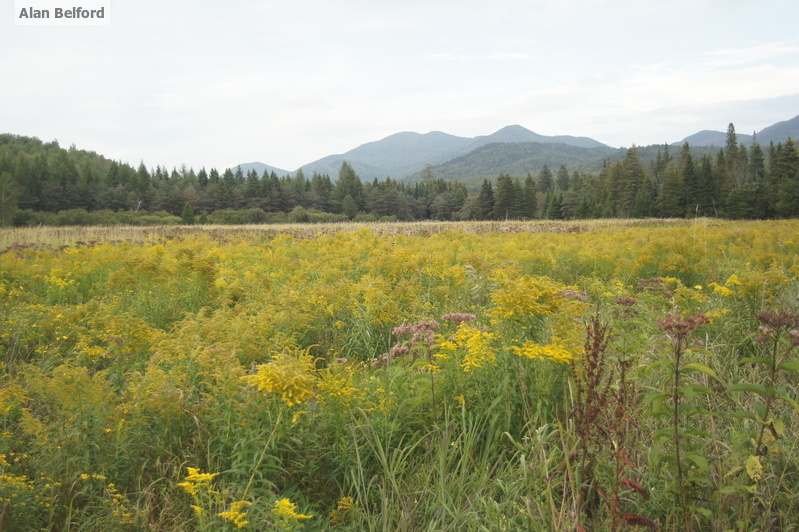 The river itself was also productive, with large numbers of mallards, but also a few wood ducks and American black ducks mixed into the flock.  My friend accidentally spooked them when he went up to the edge of the river before we knew they were there.  There was also a red-tailed hawk which moved from perch to perch throughout our hike.

One of our friends was late, so when he arrived, we looped back to meet up with him and then we returned to the river’s edge to look for migrants.  Little by little we found them.  The far corner of the large field is loaded with joe-pye weed, and from that point we began to work a small flock of birds which included chickadees, red-breasted nuthatches, yellow-rumped warblers, golden-crowned kinglets, and common yellowthroats.  It also contained less numerous species such as a few Nashville warblers, blackpoll warblers, at least one black-throated green warbler, a very brightly colored blue-headed vireo, a hermit thrush, a ruby-crowned kinglet, and a Swainson’s thrush.  Eventually the flock moved on and we were unable to keep with it as it moved off through the woods.  Mixed feeding flocks are always fun for the variety of species they possess as the birds move across the landscape in search of food. 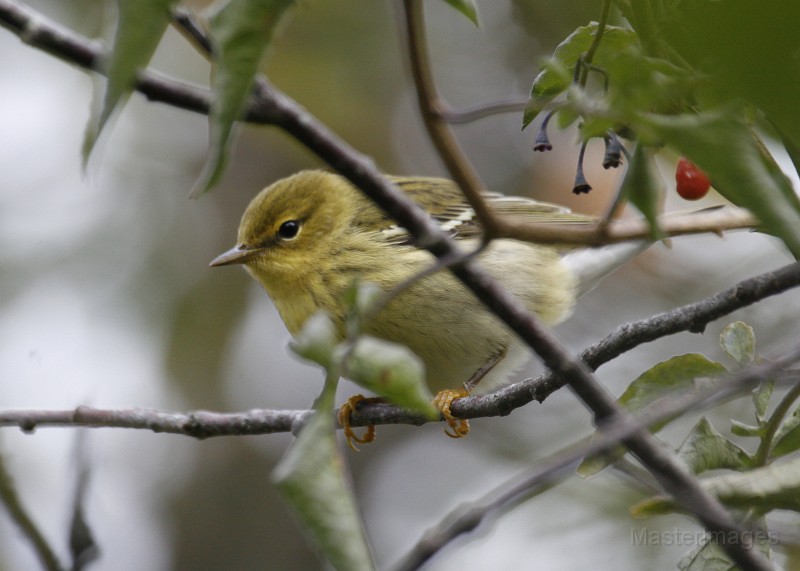 As we turned back towards the cars, an immature bald eagle flew overhead.  The low ceiling of the overcast day was starting to lift and more distant mountains were becoming visible as the blue sky poked holes in the clouds.  I watched the sun play on the slopes of Mt. Marcy and the Algonquin Ridge.  Then after chatting with the caretaker for a while, we headed off towards South Meadow and the trails into the High Peaks in order to look for more birds.