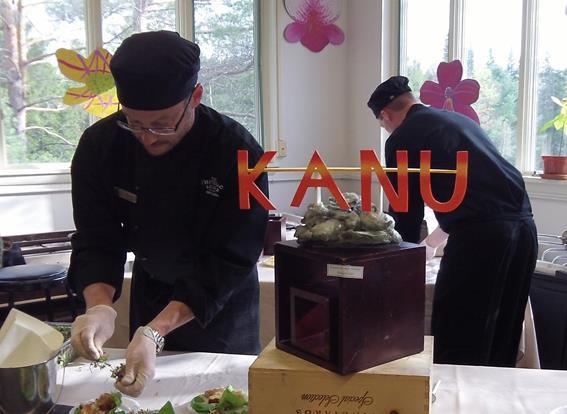 I've been looking forward to this event ever since Lake Placid Center for the Arts (LPCA) Executive Director James Lemons first mentioned it to me several blogs (aka weeks) ago.

Whenever two of my favorite things—food and live theatre—are paired, I make every effort to be there.

The event is billed as: A Taste of the Arts, An Evening of Art. Food. Fun. This chilly Monday evening finds the LPCA brimming with people—especially folks involved in the arts. We are invited to move from the main lobby where beverages are being offered into the Silk Screen Studio (known to me as the rehearsal room) where The Whiteface Lodge and The Cowboy share some delicious appetizers and some amazing food art (KANU). 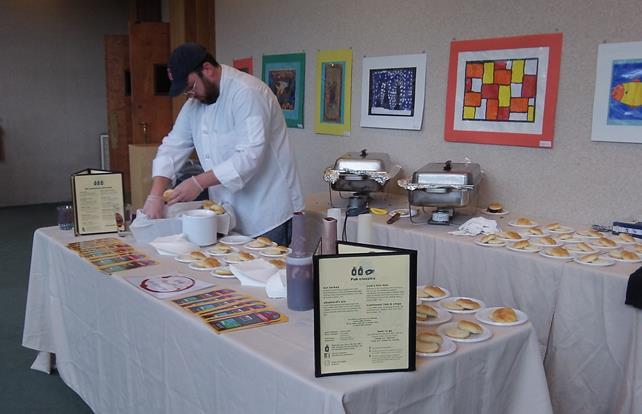 Next, we have an opportunity to walk through a dance class (led by Terpsie Toon) that is in rehearsal for a June 2 recital. We move on to explore the lower level of the LPCA and the treasures that the ceramics studio has to offer, including some signature rolls from Green Goddess. We travel through the children's workshop mural hallway and encounter Saranac Sourdough and move further down to the LPCA's infamous Green Room (aka the Naked Audience Room) where the Mexiquinn fare of Desparados awaits. Then on to the addition studio (aka back entrance) to sample Chair Six cuisine and sit for a spell with these tasty samplings. We are then directed upstairs to the Scene Shop where tidbits from Liquids and Solids are on hand before taking a stroll across the stage and out to the theatre lobby where the Lake Placid Pub & Brewery awaits with pulled pork sandwiches.

All along the way, we are guided by volunteers, most of whom happen to be actors in the upcoming musical production of "Evita" performing at the LPCA from May 17 through May 26.

This lovely dining experience is topped off by the talent of Bill Bowers and his one-man show, "It Goes Without Saying." The first words the performer utters are, " I'm a mime. I'm definitely a mime and I've kept this pretty quiet until tonight." As the evening progresses we are made aware that Bill is much more than a studied mime but also a superb story teller, mimic, and actor. He performs the poignmant story of his life, adeptly illustrated through his art. 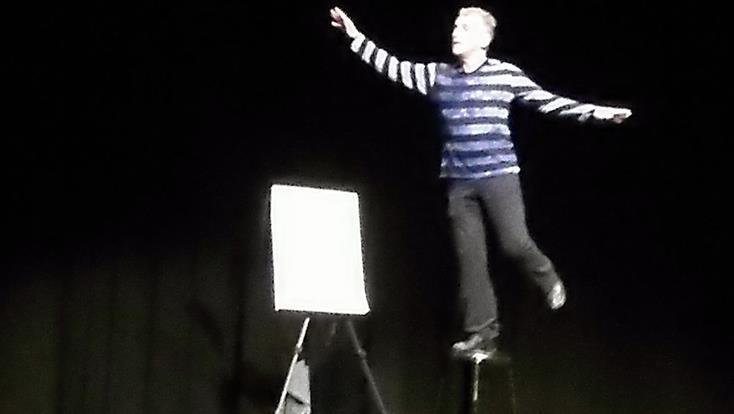 When he is introduced this evening, we learn that Bill Bowers will soon be performing at The White House in an original musical. I have a chance to ask the performer about this immediately after the show and he explains that he was in a reading in New York City the week before. The musical is called "The Gefilte Fish Chronicles" and is based on a real family in New York State and their Passover Seder that kept growing larger. It became a book, a documentary, and is now a musical written by Matty Selman and Iris Burnett. Someone at the reading in NYC invited the troupe to perform at a celebration at The White House next week.

Bill Bowers is all the dessert I need but there are a multitude of dessert foods laid out as we exit the auditorium. Suffice it to say they come from Cake Placid, Lake Placid Chocolatier, Temptations Gourmet, and the Whiteface Lodge.

I leave you with the advice that if you see an event like this posted on the LPCA schedule again be sure to make your reservation early.

To learn more about events in the Lake Placid region, click through to the web site.