The other week, Wren and I took a short hike along the Copperas Pond trail, which is a short, relatively easy hike in Wilmington Notch. The trail has two trailheads- both on Route 86 – which are spaced about one mile apart along the road. The southern access offers a more gradual approach in to Owen Pond, while the northern access gives hikers a short, steep initial climb. In fact while hiking I bumped into a family visiting from Israel who wanted to know if the entire trail was that steep. Fortunately it is not.

The rocky trails wind through forests of hardwoods and mixed conifer including eastern hemlock, white cedar, as well as some balsam fir. The highlights for most people are the three scenic ponds. 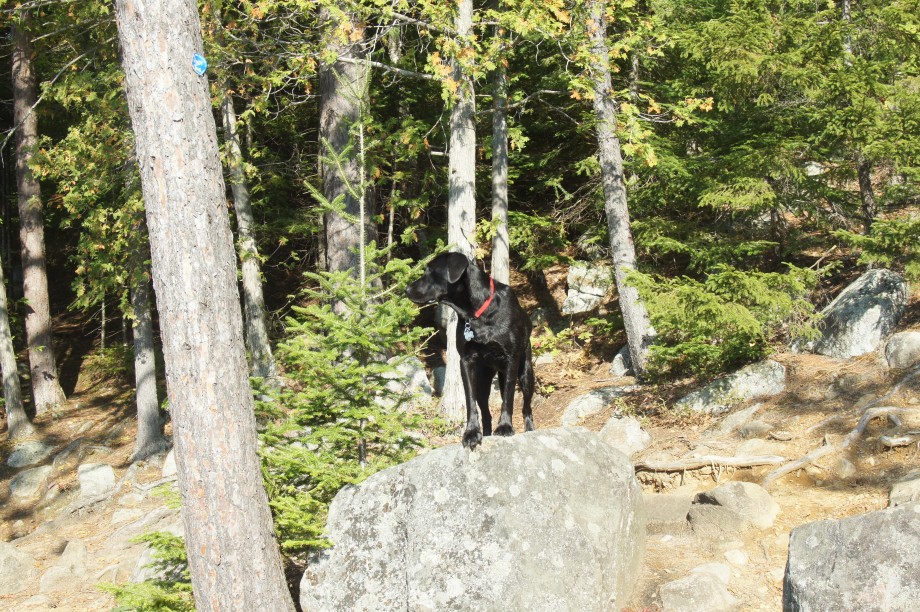 Wren and I started our hike with a climb up the northern trail to Copperas Pond, where more and more leaves on the surrounding hillsides were adding their color to the reflection in the water. We checked out the lean-to and camping area, and Wren took advantage of the nice swimming hole there.

We then took the trail which follows the southern and eastern shore of Copperas – giving beautiful views the entire way – on our way to Owen Pond. Owen Pond is another scenic pond nestled in the midst of the hills and peaks. There are a few additional designated campsites along the trail, for those interested in camping out in the picturesque location.

We were only out for a short hike though, and retracing our steps past both Owen and Copperas, we hiked on to Winch Pond, the smallest of the three. Winch is at the end of a short spur trail that intersects the main Copperas loop trail less than a half mile from the Northern trailhead on Rt. 86.

We enjoyed the sunny quiet of Winch, and soon noticed a small garter snake that was enjoying the sun as well. Leaving it in peace, we started back towards the car, passing an old beaver swamp on the way. Our hike had been quiet for birds the entire morning, but that quickly changed. As is often the case in the fall, the birds were congregated. I first heard a few black-capped chickadees, so commonly the noisiest of the group – as well as some yellow-rumped warblers. I soon realized there was a large number of yellow-rumpeds – better than fifty at least – flipping around the dead trees in the swamp and the live trees which surrounded it. Red-eyed and blue-headed vireos were also in the mix as were several species of woodpeckers – with hairy, northern flicker, and yellow-bellied sapsucker all represented. But the highlight of the avian collection was the blackbirds. 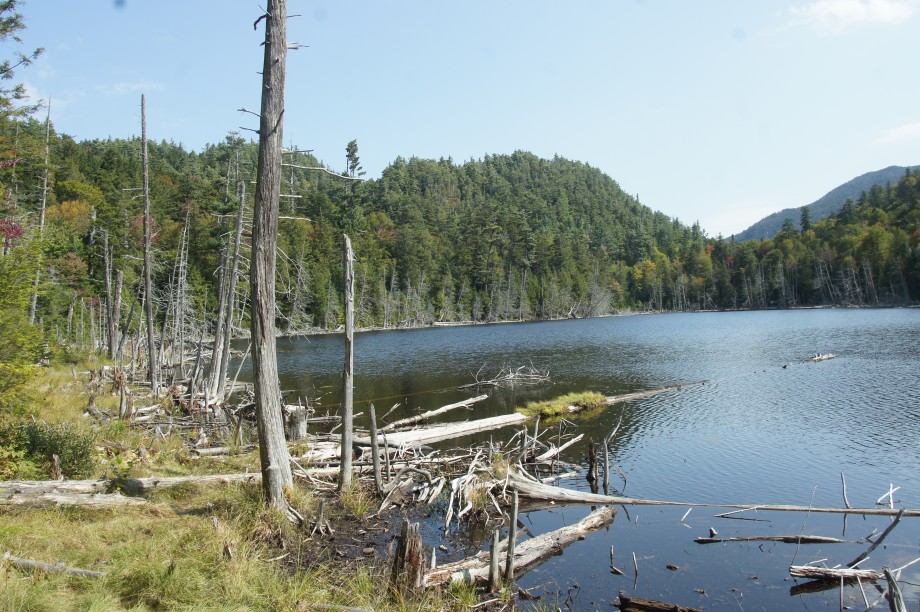 There were 15-20 common grackles in the trees, an Adirondack breeder commonly found in such wet habitats. But there was an equal number of rusty blackbirds, a much less common breeder in boreal wetlands and bogs in the park. In fact, there is a great deal of growing concern over declining rusty numbers in the Adirondacks and throughout their range. After all, in my work monitoring boreal bird populations in the park, we find very, very few rustys – one of our target species. Rusty blackbirds utilize wetlands not only to breed, but also as they migrate and winter in the southeast U.S. This group of birds in the beaver swamp was likely a flock of migrants, but it was exciting to see them given the concern over their population numbers, and the fact that they are often difficult to find.

In fall rusty blackbirds acquire the rusty appearance for which they are named – the males trading the dark, clean black of spring for orangey-tinged plumage. The females are even more rusty-looking than the males, with orange-buff and rufous plumage. I watched the flock for a while and they eventually flew to the far side of the swamp. Then we returned to the car, happy with our find.