While looking like a reed may not be high on the priority list of most people, it is an underrated skill. After all, it can be a tremendous asset should say, the IRS come calling, your boss give you a long list of things to do, or the in-laws make an unexpected house call. You see, looking like a reed allows you to disappear into the background. It helps you go unnoticed. 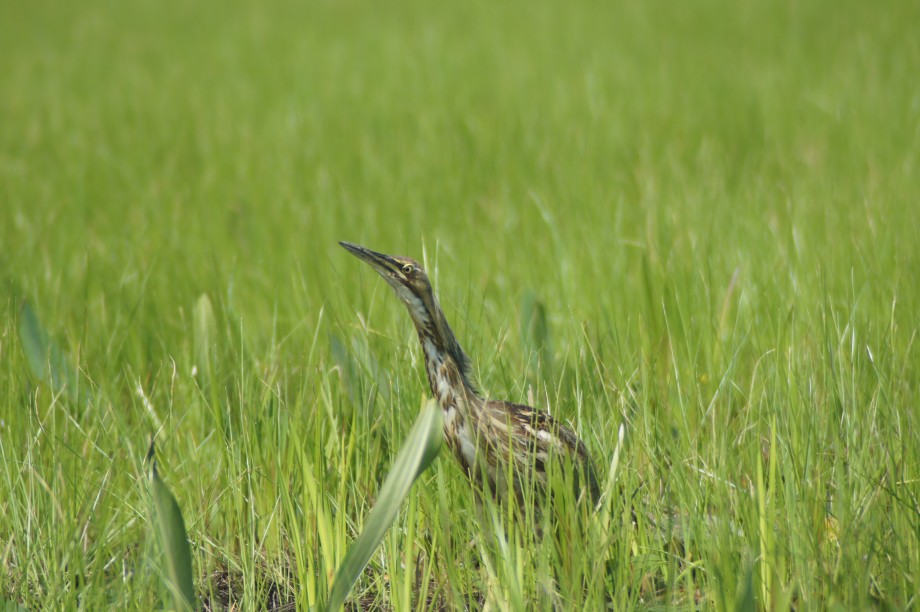 For most animals, such skills are an indispensable part of life – camouflage allows them to find food while avoiding being eaten themselves. But some species make it an art, and the chief artisan of the "how to look like a reed" craft is the American bittern.

American bitterns are stocky, medium-sized herons – that is to say, rather large birds that you wouldn't expect to hide well. They inhabit many Adirondack and North Country marshes. Feeding on fish, frogs, and whatever other small things they can catch, bitterns skulk through the cattails trying to remain unseen. Their long legs and neck would seem to be dead giveaways, but they can be tucked or extended to help them look like just another clump of cattails. They are often found with their bill pointed straight up to help bolster the lie they'd like you to believe. To help accentuate this charade, a bittern's breast and neck are streaked with brown and white as if cattails and reeds were painted on their feathers.

Bitterns adopt this nose up pose all the time – and not just when they are standing still. In fact, one of the first bitterns I ever saw slowly walked across a wide path in front of me with its nose in the air all the time as if to say, "pay no attention to the walking reed."

On another occasion I stumbled across a bittern just a few yards from me in a field near a marsh while I was leading a birding group. It was undoubtedly catching frogs and insects there. The bird was facing us, and would have had to fly directly at us just a few yards away in order to make its escape. With its nose held high in the air, it incrementally shifted its feet so that it performed a slow-motion pirouette until it faced away from us. And then with a whoosh of its big wings it flapped and flew away.

While bitterns seek to make themselves a challenge to find, they are not uncommon, and are often heard as well, producing a low frequency pumping sound that carries across their marsh home. They are quite common in many places in the North

Country during the summer, with a stronghold in Jefferson and St. Lawrence counties. In the Adirondacks they can be found in many area marshes and wetlands, both large and small. These include the marsh at the VIC in Paul Smith's, the marsh at the south end of the Bloomingdale Bog Trail north of Saranac Lake, and the causeway marsh south of Tupper Lake on Rt. 30. They are most easily observed in early morning or evening when they may fly around low over the marsh or call.

It is then that you can try your luck at finding one and take lessons on being reed-like as you do. That way the next time your boss drops a stack of papers on your desk, you can be hiding the corner with your nose in the air, waiting for them not to notice you.