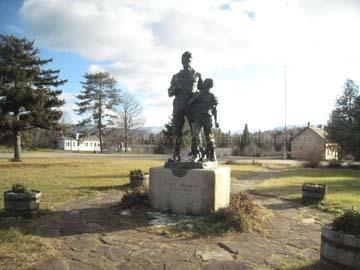 It has been a few years since we visited the final resting spot for militant abolitionist John Brown. The John Brown Farm and Gravesite in Lake Placid encompasses the original 244 acres purchased by the Browns in 1849. Brown moved to the Adirondacks to assist freed African-Americans farm land given to them by Gerrit Smith, a wealthy abolitionist from the Utica area.

Brown's history and involvement in the abolitionist movement is vast. After Brown was executed in 1859 for treason for the raid at Harper's Ferry, his name soon became synonymous with the anti-slavery movement.

The house and gravesite are closed for the season, except during scheduled events, so we peek through the gate and read the interpretive signs to gain snippets of information of what may have compelled John Brown to give his life to help free others.

At first glance, the property looks like any other farm with a beautiful backdrop of the Adirondack Mountains. Trails are marked and plenty of people stroll past the gravesite and house. The kids climb the rocks, skip stones and play tag. There are four marked trails with distances from 0.03 miles to 1.8 miles in length. Dogs are welcome but should be on a lead while on the trails. 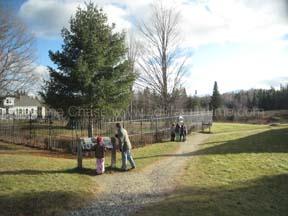 With news shows spotlighting a world of intolerance it is sometimes difficult to explain to children when it is the right time to take a stand against prejudice. I do not condone violence. I always hope for a better way to settle things.

On December 3-4, 2010 there will be a two-day Anti-Slavery Convention held in a variety of places around Lake Placid. Though most of the events may not be interesting to the very young, the gravesite will be open for a wreath ceremony on that Saturday. The house will also be open for quick tours during the time, then closed again for the season.

I do not want to always just talk at my children to be accepting of other views. I want them to learn that choosing violence is not the way. I also want them to know that they also just can't accept intolerance. It is a tricky road with many bumps for us to maneuver along the way.

From Old Military Road in Lake Placid, take John Brown Road to the end, about ¾-mile. The grounds are free and open all year from sunrise to sunset. The John Brown Farmhouse and Gravesite is open from May thru October. Admission for the tour of the gravesite and historic house is $2.00 Adults, $1.00 NYS Senior Citizens and children 5-12, children under five are free. Call 518-523-3900 for more information.

Adirondack Family Time Tip: The open fields and trails are a different playground from wooded hikes around the Adirondacks. It is not only a great place to bring dogs but can be a quick remedy for children/adults to release excess energy.