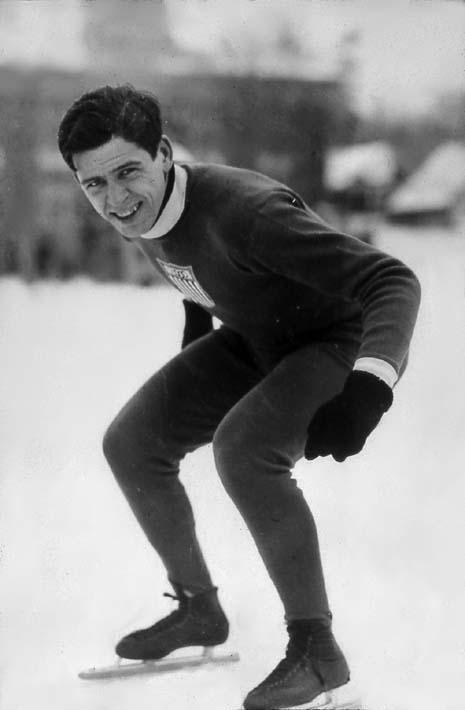 Jack Shea, winner of two gold medals in speedskating at the 1932 Lake Placid Olympics, died January 22, 2002 from injuries sustained in a car accident. At 91, Shea was the oldest living Olympic Winter gold medalist.

Shea's death came just one month after his grandson Jim Shea Jr. was selected to a spot on the United States Olympic skeleton team, putting the Sheas in the prestigious spot of being the first family with three generations of Olympians. Jack's son, Jim Sr., competed at the 1964 Winter Games in Innsbruck, Austria, in cross-country skiing events.

NY State Police said a van driven by Herbert J. Reynolds, 36, of Saranac Lake struck an auto drive by Shea head-on. Reynolds, who was treated for a cut lip, was arrested on charges including driving while intoxicated and was released to await a court appearance on February 4. He had apparently slid out of control on snow-covered roads.

Shea grew up on Mirror Lake in Lake Placid. In high school, he won the North American men's championships in the 1929 and 1930.

At the 1932 Olympic Winter Games in his hometown of Lake Placid, Shea a 21-year-old sophomore at Dartmouth College, took the Olympic oath on behalf of all the athletes.

Later that day, in the first final of the Olympics, he won the 500-meter speedskating gold medal. The next day he won the 1, 500-meter gold. Shea has always called the 500-meter final the highlight of his career. He has said it was the one win he wanted the most.

When Shea returned to Dartmouth, more than 500 people greeted him with an outdoor celebration. While his classmates were proud of him and honored him with a huge welcome, the college administration seemed unimpressed. They held him responsible for all the work he missed while competing in the Olympics.

Shea refused to skate in the 1936 Winter Games in Garmisch-Parkenkirchen, Germany because of the direction Germany seemed to be taking in world politics. "I majored in political science, and I knew what was going on in Germany and I didn't like it. And I didn't compete again because in those days, 25 or 26 years of age was over the hill, and I had four kids then" he is quoted as saying.

In 1934, Shea married Elizabeth Stearns of Saranac Lake. He is survived by his wife; three sons, Jack of Elmhurst, Ill., and Jim and Michael of Lake Placid; several grandchildren and great-grandchildren.

John Amos Shea was born September 7, 1910 in Lake Placid. His father, James, was a state assemblyman. After graduating from Dartmouth, Jack Shea attended Albany Law School for a year. But money was scarce, and he left law school to support his family. He was a letter carrier and then he ran the family's gourmet market and was the secretary of golf at the Lake Placid Club.

From 1958 to 1974, he was the town justice, and from 1974 to his retirement in 1983 he was the supervisor of North Elba, the township that included the village of Lake Placid. He then became vice chairman of the Olympic Regional Development Authority, a New York State organization that took over the sites for Lake Placid's 1980 Winter Olympics.

He was a familiar figure at Lake Placid, walking around the ice rink or strolling around Mirror Lake in his 1932 Olympic team jacket. He skated recreationally until 1994.

His grandson's achievement in making the Salt Lake City Games thrust him back into the spotlight, and the three Sheas appeared in a television commercial. Jack Shea was to have been honored at the opening ceremony of the Winter Olympics in Park City, Utah in February 2002.

When the Olympic torch relay came through Lake Placid in December of 2001, Shea carried it into the Olympic speedskating oval where he won his gold medals.

"Jack Shea was an important father figure for this community, " Mayor Roby Politi of Lake Placid said. "He was a kind of curator of the Olympic spirit that this community has been engulfed with over the years."