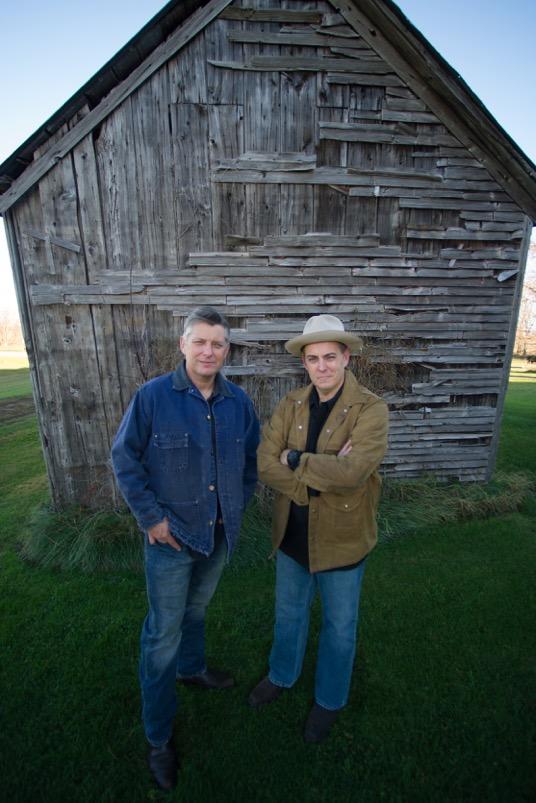 The Boys are Back in Town

Lake Placid, NY: International Bluegrass Music Association Entertainer of the Year winners, the Gibson Brothers return to the Lake Placid Center for the Arts for two nights on Friday, November 3 and Saturday, November 4 at 8 p.m.  Tickets are $20 in advance and $25 at the door. Tickets are available by calling the LPCA Box Office at 518.523.2512 or online at www.lakeplacidarts.org.

The Gibson Brothers' brand of bluegrass is a visceral mix of heritage and soaring harmony, making them the premiere brother duet of the genre, following in the footsteps of legendary brother acts such as the Stanley Brothers, Jim & Jesse, and the Osborne Brothers.

Born on a northern New York dairy farm, they began on banjo and guitar in middle school.  Their dad, Kelley, owned a banjo, a fiddle and a guitar, and offered them lessons - under the condition that they not quit.  And while they did, indeed, stick to the music firmly planted in farm and family, the brothers expanded outward from there, from the Earl Scruggs lesson book to listening to Don William, to Ricky Skaggs with Emmylou Harris—an important intersection of country and bluegrass—and to the revelatory inspiration of Flatt & Scruggs Live at Carnegie Hall.

From those beginnings, combined with music in church and its emphasis on singing and harmony, the brothers created their own distinctive style of singing and songwriting.  "I think there a few things in play here,” Leigh told The Boston Globe in 2015.  “The first is genetic, the second is tone.  The other part is learned.  It's the fact that you grow up in the same household, and you learn to talk with the same people.  You pronounce things the same way, you mispronounce things the same way.  That tightens things just a little bit."  Brother acts, he says, often grew up in simple rural settings like their own.  "A lot of our entertainment at home came from playing and figuring out songs."

"Being removed from the rest of the population of bluegrass musicians, there was an individual sound created," he summarizes.

Award-winning bluegrass broadcaster Katy Daly highlights another major part of their impact and appeal: "The music is layered and textured, enhancing the lyrics and bringing the brother-duet tradition into the twenty-first century.”  To help in the job, the Brothers have a loyal and virtuosic team of musicians with them. Mike Barber, together with the boys so long he's often called the third Gibson brother, is a 23-year veteran of the band, grounding the duo on bass.  Clayton Campbell, outstanding fiddle player, has been providing sensitive back-up and stellar solos for over a decade, and while Jesse Brock is a relative newcomer to the band, he’s a polished veteran who’s earned the IBMA Mandolin Player of the Year award with forceful rhythm and dynamic solos that are by now an integral part of any Gibson Brothers show.

This presentation of the Gibson Brothers is sponsored, in part, by Mike Foote State Farm Insurance.

About the LPCA
Nestled in an Olympic village, the Lake Placid Center for the Arts is a year-round treasure to residents and visitors of the Adirondacks and is the premier art and cultural hub of the region. Orchestrating quality programming, performances, rotating art exhibitions, and education experiences to residences and visitors alike, the LPCA provides an ensemble of offerings in music, theatre and dance, and supports local, regional and national artists in its Fine Arts Gallery. At the heart of this hub is hands-on learning experiences for children exploring their creativity and adults finding new passions. As a leading organization, the LPCA collaborates with other Adirondack non-profit partners to build, support and cultivate the arts community. Inspiring excellence in the arts for generations, the LPCA continues to thrive today at its unique and captivating Lake Placid campus.