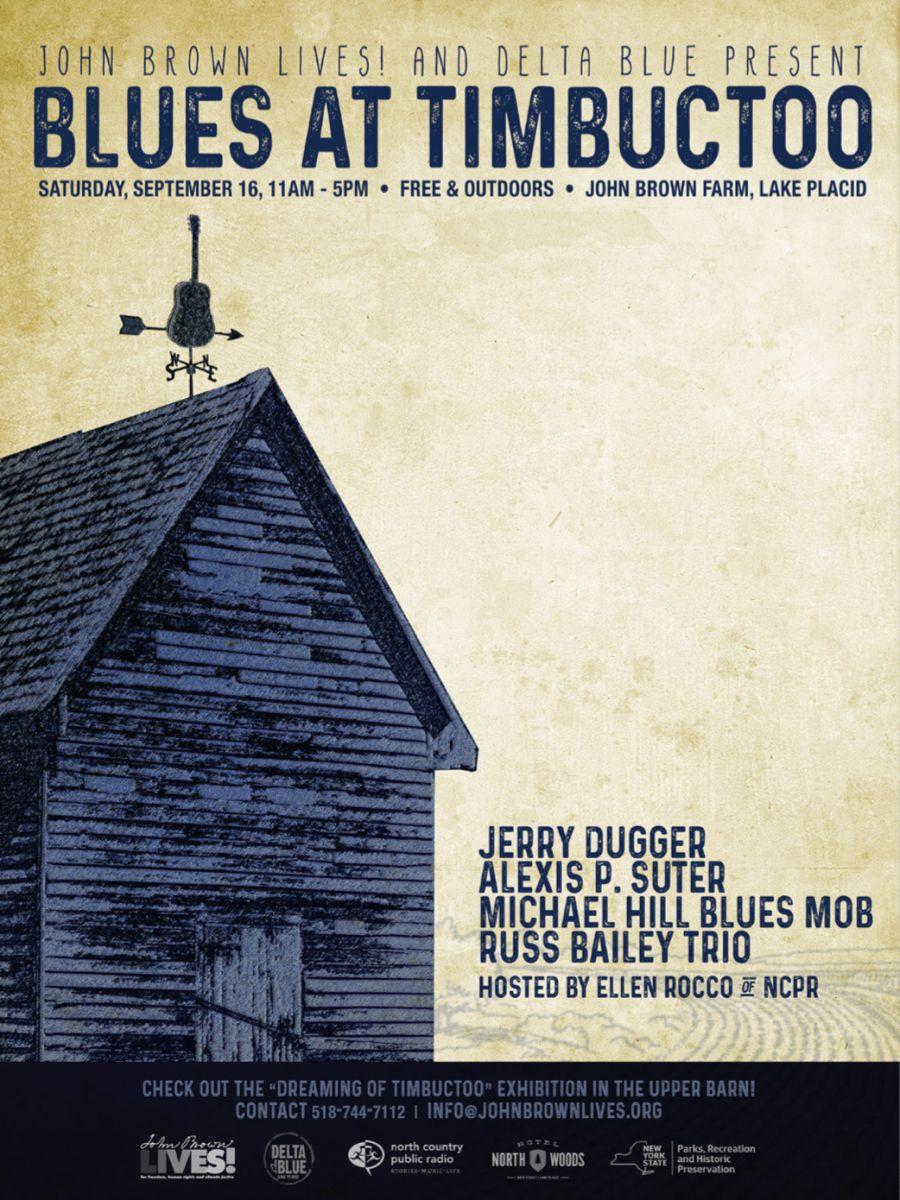 LAKE PLACID, adirondacks, usa -- The second annual Blues at Timbuctoo festival will bring four acts to historic John Brown Farm on Saturday, Sept. 16, from 11 a.m.-5 p.m. The event, which is presented by John Brown Lives! and Delta Blue, is free and open to the public.

This year’s performers include:

The festival marries blues music with a conversation about race relations in a place synonymous with the struggle for civil rights. Gary Smith, co-owner of the Delta Blue restaurant and blues club at the Hotel North Woods in Lake Placid, said he was inspired to launch the festival in 2015 after hearing Dugger deliver a heartfelt plea that Americans do more to talk with each other about the things dividing society, and do better to elevate the human condition among each of us.

Dugger’s message is simple, Smith said: “We should invite people into our homes. Eat each other’s food. Know each other’s children. And talk to ourselves, and our children, about the circumstances in which we find ourselves.”

“This is more than just a music festival,” said Martha Swan, executive director of John Brown Lives!, a Westport-based organization that uses history’s lessons to inspire civic involvement to address some of the most pressing concerns of our time, from mass incarceration and human trafficking to voting rights and climate justice. “It’s about cultural awareness. It’s a conversation. It’s a way to bring people together to celebrate music and ideas and the things that make us stronger, and that’s something we need more of these days.”

In addition to the music, John Brown Lives!’ “Dreaming of Timbuctoo” exhibition will be on display at the farm’s Upper Barn. The exhibition is a detailed exposition of part of the North Country’s abolitionist history, in which wealthy landowner Gerrit Smith helped black New Yorkers gain the right to vote by giving away 40-acre plots of land. The giveaway undercut a ruling that had denied those rights to black New Yorkers who owned less than $250 in real property, and encouraged several families to relocate to the area.

The exhibit is on permanent display at the barn.

JOHN BROWN LIVES! (JBL!) is a freedom education and human rights project that uses the lens, legacies and lessons of the past to inform and inspire civic involvement to address some of the most pressing concerns of our time, from mass incarceration and human trafficking to voting rights and climate justice. Since 1999, JBL! has sponsored surprising collaborations, groundbreaking research, community dialogue and cultural initiatives that upend conventional narratives, provide portals for oft-avoided conversations and facilitate examination of our history for its useful legacies in the present.